Swipey Rogue is a swipe controlled, auto-running dungeon crawler with puzzle, arcade, and rogue-like influences. Adventure mode lets you explore mythical ancient mines, collect gemstones, and unlock new areas of the world. In this week's update I share development progress on dividing the world into 4 areas.

Posted by GrindCrushLLC on Mar 6th, 2015 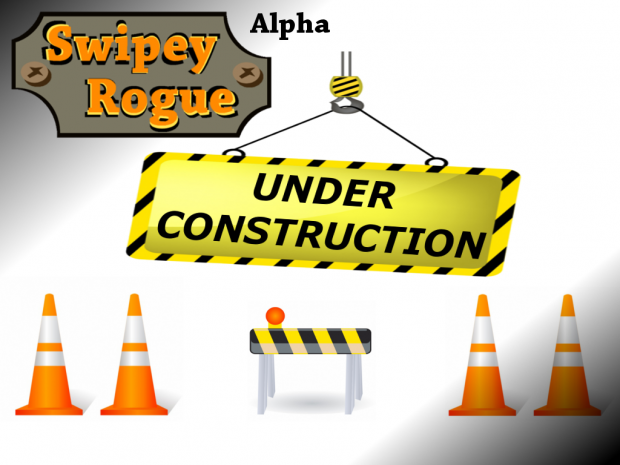 This week, the world of Swipey Rogue was divided into the 4 themed areas that the player will explore in Adventure Mode. This work impacted the level editor, the ui, the map, the lighting, the room tilesets, and the front end flow with the addition of the world map.

This video walks through all the changes in the editor and gameplay ui to accommodate splitting the world into 4 areas:

The world of Swipey Rogue encompasses a vast array of underground tunnels and rooms of a fantastical mine. The mine is broken into multiple areas that are loosely themed around elements. The Lava Area is unlocked at the beginning of the game but the Ice area, the Metal (or mechanical) area, and the Magical area are locked. 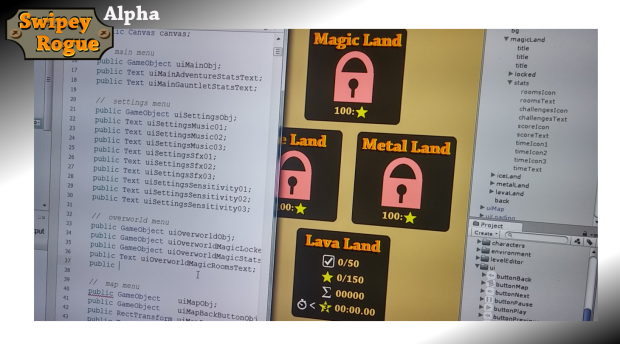 Each area has it's own scrolling progression map showing all the rooms in the area, their status, and how many challenges have been completed. The progression maps for each area will be themed visually to that area. The parallaxing background layers will be colored to the area, and there will be unique elements in each that reflect what's unique about the rooms in the area. 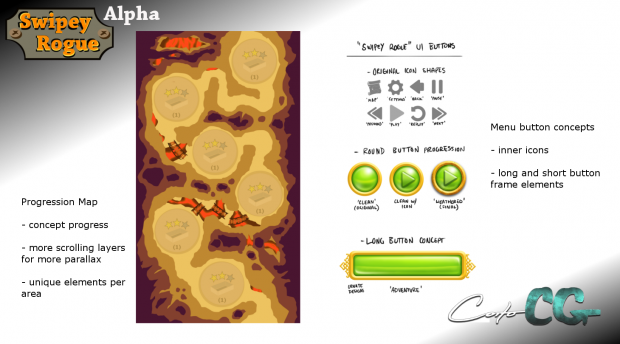 A significant amount of work has gone into the level editor (room editor really) to handle grouping all the levels (rooms) in the world into 4 different areas. 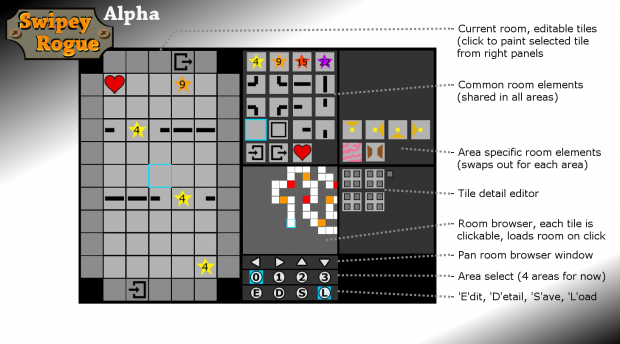 There is an area selector now (0-3 buttons) to switch between the 4 areas. The room browser now displays the set of rooms for the currently selected area. The tile "palette' has been divided into common elements that are used for all areas, and panel for elements that are unique to each area that swaps in and out depending on which area is selected.

I've created an Area Asset Manager to handle swapping out assets between areas of the world. This has allowed me to create sprite sheets for all 2D elements used in each area. I'm displaying the floor tiles in the rooms as 2D sprites drawn under everything else. This allows me to tint each sprite and reduce draw calls when all sprites are on a shared sheet. 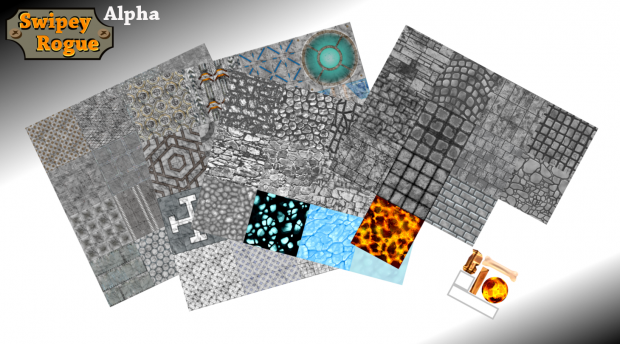 Here are early versions of the area spritesheets. I grouped ground tiles into categories to fit each area (stones tiles for lava area, rocky for ice area, metal for metal/mech area, and patterns for the magic area).

The actual ground tiles are all grayscale so that I can tint them in game. This gives maximum amount of variety. Since there are roughly 10 different ground tile patterns for each area, rooms in an area will re-use patterns. However, each room has a unique tint color that is applied to the ground tiles so they'll never look exactly the same. 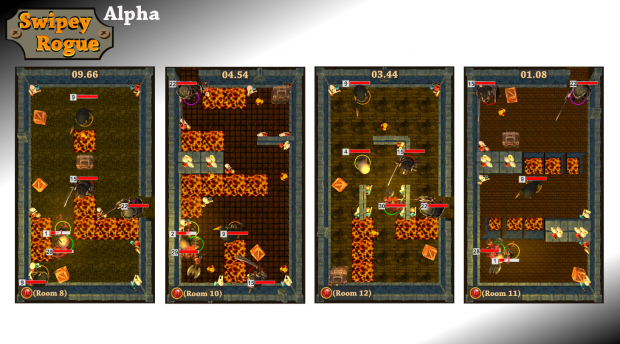 Here's a collection of screenshots from some rooms in the Lava Area. You can see the different ground tile patterns being used and the different color tinting. The color themes for each area will be shared with the color theme used for the scrolling progression map for that area.

I've decided to include a sensitivity settings option in the settings menu. It allows the player to adjust how quick their swipes are detected. I noticed that I was wanting the ability to perform much faster swipes to help with speedrun times. However, the more tightly I tuned the swipe detection, the more difficult it became for the novice or casual player. So I made a set of 3 sensitivity settings that the game can toggle between through the settings menu.

This video shows the menu and explains how it affects gameplay.

Lots going on this past week. Not much to show in game, but I figured it was worth sharing some "behind the scenes" changes. Thanks for tuning in. Feel free to ask any questions.