Swipey Rogue strives to capture the enticing gameplay elements from action/arcade games and merge them with dungeon crawling themes, settings, and gameplay elements. Being developed first for Mobile, the game is meant to also be played on PC/Mac/Linux in a small portrait window with arrow controls (arcade style). Major feature work is wrapping up, as well as content work, and polish. This update shares finalization of the HUD elements that support the looting system and entity health bars. 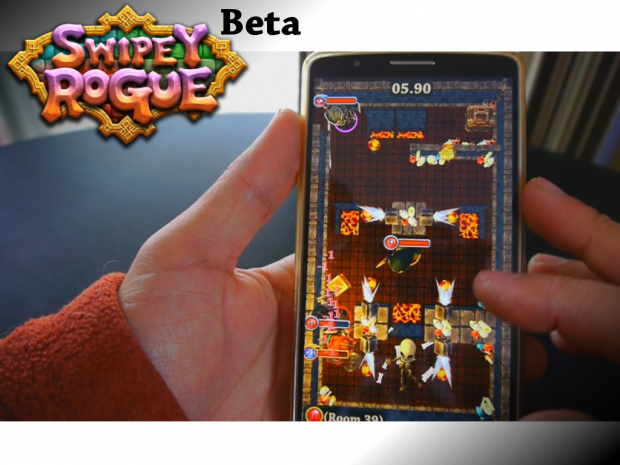 With design work wrapping up in more areas of the world, I want to make sure I'm also finishing the remaining polish items for the UI. This video demos some gameplay and shows off the finalized HUD elements. 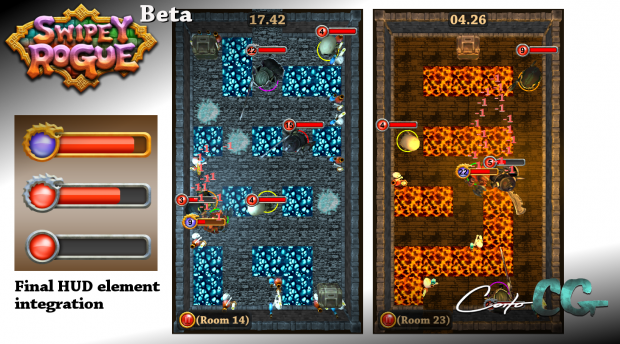 It wouldn't be a dungeon crawler without health bars. Anthony sent me the finished elements recently and I've integrated them. I was doing some playtesting this afternoon and suddenly got that feeling that things are looking almost finished! Very exciting. 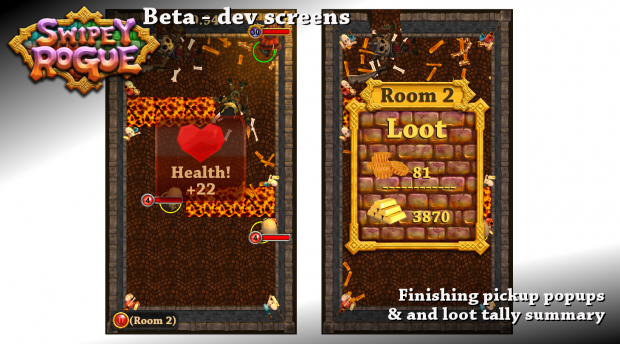 I changed the messages that pop up when you get a pick-up. It used to be a small number popup by your character. Now it's a large, center screen panel with an image and a text message. It communicates better and it's much more satisfying to see.

I also changed the exit screen loot summary to use more images instead of text, also more satisfying.
The changes feel great, but now I'm tempted to expand the looting system. I don't want to grow my scope any more, but I have been dabbling with having the enemies drop basic items that you don't use (you only automatically cash them in for gold). It feels like a good balance between adding more fun to looting but not blowing the scope of the game out of proportion. We'll see. You'll be the first to know! :)

That's all for now. Lots of little things coming together while some last larger things finish up. Thanks again for following along. Feel free to comment or share. I'm not sure how much I'll really be marketing this game. I need to start looking into making an early press build to send to some websites. Busy busy.