Swipey Rogue is a mobile, arcade blend of swipe-action, auto-running, and dungeon-crawling, room-puzzling. The Challenge Saga mode offers 200 hand crafted challenge rooms across the 4 unlockable areas of the game. Free Running mode generates continuous labyrinths for you each time you play and lets you run as far as you can go while upgrading your character. This week's update outlines the work that has gone into the procedural systems of Free Running Mode with screenshots, videos. 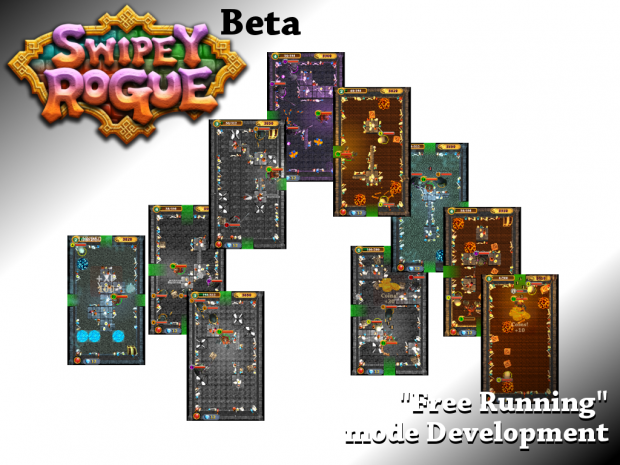 I've shared a lot of development of the "Challenge Saga" mode of Swipey Rogue, but I haven't shown "Free Running" mode yet. This mode has changed names many times since the beginning of the project and may change names again. I need something that conveys open running through dynamically generated mazes.

I needed to wait until the end of the project to develop this mode because it takes all of the gameplay mechanics of the game and re-configures them into a new way of playing. I couldn't do both modes at once. All the work for Challenge Saga was what made Free Running possible, even though the intention from the beginning was to make the Free Running mode.

I renamed the game modes (again!) to make it all more clear. I think it's good this time!

Check it out. I made a new annotated screenshot of the main menu to explain the modes. I've actually updated this screen since this shot (crazy how fast development is going). I'm referring to the mode as "Free Running" now instead of just "Free Run". Without the "ing" it felt like maybe it was a pay game that let you take a 'free run' or something like that and I didn't want to confuse people. 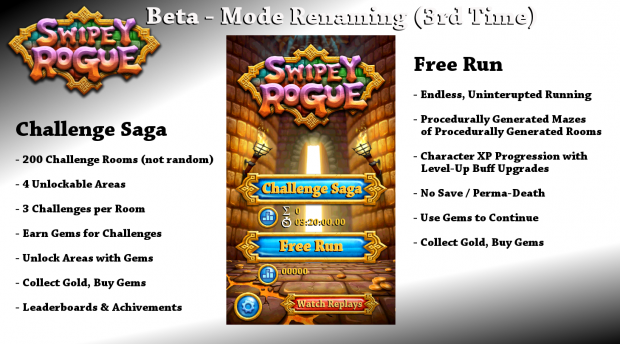 When you enter the mode from the main menu, you are presented with a pre-labyrinth menu below: 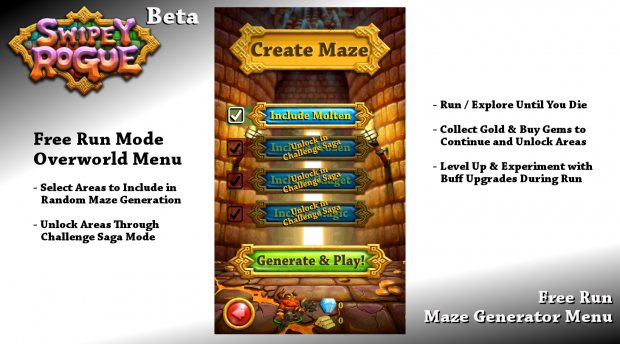 The labyrinth that is generated for you can be composed of room themes and gameplay elements from any and all of the world areas that you have unlocked in Challenge Saga.

You can pick any combination of area elements to include in the Labyrinth. It is fun to stick with one type for the predictability of it, but it's also very fun to include them all (once you've unlocked them all) for the crazy. You never know what type of room you'll be entering into next! Many new systems were added to support the procedural maze running gameplay in Swipey Rogue's "Free Running" mode. However, I was able to leverage the tools I had already created to speed up the process. I use my level editor to create ‘seed’ data for the procedural systems in the game code.

I felt this was a novel way of taking advantage of tools I had already created to make richer data sets to feed the procedural systems (it also gave me visual debugging as I can both edit and simulate maze gen in the editor and see results and fix issues).

This mode has been implemented very quickly because I was able to use what I have and not re-invent the wheel. Below are 2 videos that demo both the tools and the results of the new "Free Running" mode for Swipey Rogue. 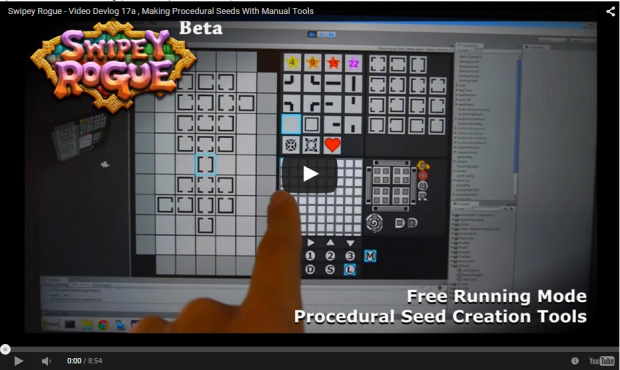 In the above video I attempt to walk you through all the editor tools and how they were leveraged to create base patterns upon which the game code can procedurally add or remove from to create random variation. (I really just end up speaking too quickly and forgetting to mention a bunch of relevant context).

In the above video, I walk you through the menu flow for getting into Free Running mode and selecting the world themes to include, then play the game and show some of the HUD and the end run summary screen.

Thanks again for dropping by and seeing how I'm doing. I'm hoping to wrap things up soon. I've been doing so much online dev logs and sharing to help try to drum up some attention for the game, but I really just want to finish it! haha. Very close now. I appreciate all comments, questions, likes, shares etc. Follow me anywhere else on the web and say hello!