Swipey Rogue is an arcade mashup of popular single touch mobile action game mechanics, and a top down grid based rogue-like. Your always running hero is controlled by simple directional swipes. Dodge the obstacles, plan your enemy engagements, get the loot, and get to the exit! For our first update, we're introducing the game, showing a bit of the work behind the scenes in early development with the level editor, and sharing some gameplay gifs! 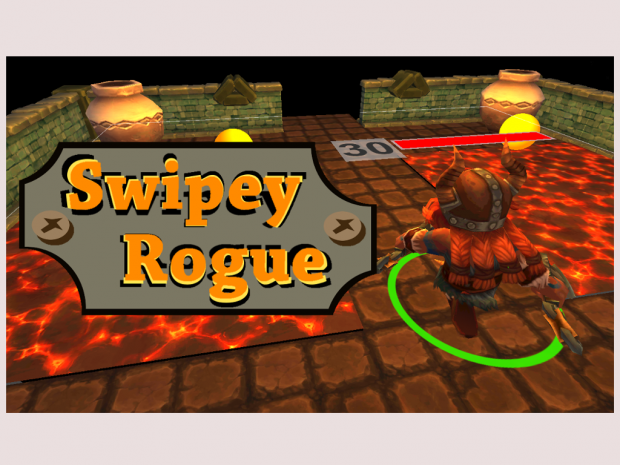 The idea for Swipey Rogue came about while experimenting with virtual stick and swipe input on mobile. I wanted to control an ever moving character in some sort of action scenario. However, I'm also love action RPGs and Rogue-likes. I became curious to see if I could make a game that somehow combines the fun elements of grid based rogue-likes and the action elements of simple touch games like Flappy Bird and Jetpack Joyride.

The result is Swipey Rogue! It's still pretty early, but I'm starting to feel some potential here so I'm pursuing this project and sharing my progress here with all o' y'all. 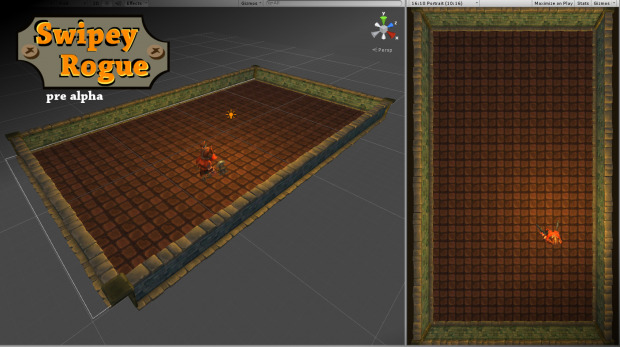 I wanted to use a top down view that maximizes the screen and allows for portrait play. I find portrait play much more convenient for mobile games than landscape games as it allows you to play with one hand more spontaneously (which is key for mobile games IMO). I got a small set of great assets from the Unity store (BitGem makes nice stuff!) and started optimizing, chopping, and building. In the end I got the above grid. It is 5x9 tiles, each tile is 4x4 Unity units. I created prefabs for the walls so that every wall segment could double as an entrance or exit (giving me maximum flexibility for designing levels). 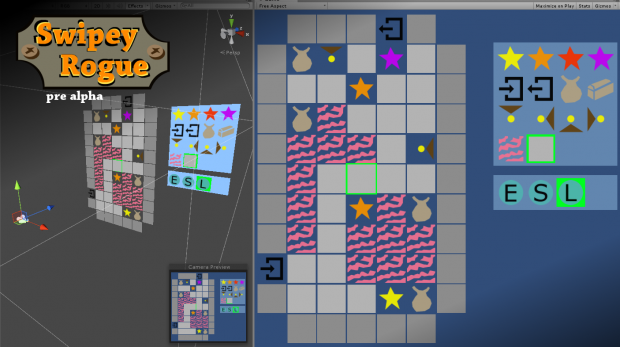 The above screen shows the level editor in action on the right through the camera view, and the elements of the editor sitting in a Unity scene on the left. I just used sprites with colliders added to them and a bunch of onMouseDown scripts. I can paint items into the tiles on the left from the 'pallet' on the right. Currently it supports: ground, lava, enemies (easy, medium, hard, boss), breakable vases (with meat pickup inside!), directional fireball turrets, and 1 entrance and 1 exit. It saves and loads data to/from XML and the game side loads, parses, and builds it with prefabs I chopped up into usable modular chunks.

But wait! Rogue-likes have randomly generated levels!! Ya ya, I know. That's Gauntlet Mode. Right now, I'm sharing how Adventure Mode is made.

For Adventure Mode, I could spend the time creating a procedural system which creates random snaking patterns of lava and stone through a room, add random enemies and pickups.. blah blah. But, I felt this mode needed actual designed levels, not randomized. Nothing against procedural stuff, I enjoy making procedural systems a lot, I like playing games like that, and Gauntlet Mode functions in that way. For this mode though, I really felt like making the rooms more intentional spaces. My goal for Adventure Mode is to ship with 200 rooms. I'll outline how the level progression works in a future update but a quick description would be that it's all about beating all the levels and replaying them to get "3 stars" on each, getting a higher score, and beating your fastest time. 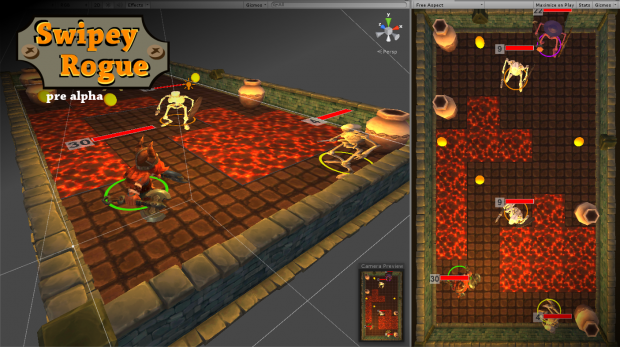 Above, you can see all the level assembled from the level editor using the modular asset prefabs and the enemy, hazard, and interactible prefabs that I made. On the left you can see the perspective view in the Unity editor, and on the right you can see the gameplay view through the camera. It's so exciting at this stage to finally see it working from editor to game. It feels like anything is possible now, but there's still a lot of work.

The wonderful 3D models from Bitgem helped me get up and running faster, giving the game some life with attractive assets instead of temp art. I may keep them through release or source other assets. Check out their website for great work.

If you've made it this far, thanks! I'm looking forward to continuing with this project. I'll be swapping out the enemy assets with something better, and looking for some variations for the floor, walls, and hazards. The progression system is the next big task. I'll do a dev update as I move further into that!

Thanks for dropping by. :)