The Drag[en]gine is an free software project with a highly modular structure based on the GLEM System. Its design is similar to an operating system. The entire functionality is provided by Modules comparable to device drivers. The engine itself acts like a system kernel managing modules, resources and abstracting the underlying system. Due to the loose coupling of the modules with the system and other modules it is very easy to exchange or improve them without interfering with the rest of the engine. As a result the modularity extends from the developer to the end user who can now choose the optimal module combination for his personal computer even down to per game setups ( and even while running a game ) if required. Developers do not have to worry anymore about low level concerns keeping them concentrated on their game. In contrary to other engines (including high-end commercial ones) the Drag[en]gine provides true 0-Day portability of games with no extra costs and no troubles neither for the developer nor the end user.

The Drag[en]gine Game Engine is dual licensed under L-GPL (for commercial projects and proprietary use like on consoles) and GPL (for free game project). This affects only game engine modules, launchers and IGDE editors. Game projects do not link against the game engine and thus are not affected by the license.

In short: By using Drag[en]gine you do not have to worry about licensing at all.

For more information check out the Drag[en]gine Wiki.

Due to the modular nature a fixed list of engine features as other engines provide is not possible since it all depends on the customer's choices. To avoid cluttering the summary find the features list in this article: 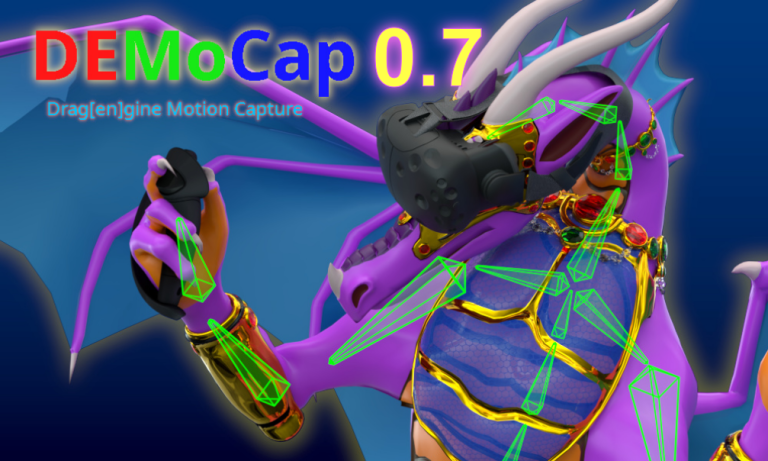 This release has 3 main updates besides bug fixing and general improvements.

First update is on the UI making it easier to use.

Second update is adding support to capture actor transform (position, orientation) as own animation as well as capturing objects (bone animation and transform). This way you can now also capture interactions with objects and get the resulting animations separated by actor and objects for easy integration in your projects.

The third update is adding network access to DEMoCap. This allows other applications to connect to DEMoCap using the Drag[en]gine Network Protocol (DNP) to access motion capture animations in real-time. As an example for this an Unreal Live Link plugin has been created. This way you can install the plugin from inside the UnrealEditor and connect to a running DEMoCap session (same computer or another across the LAN) to stream motion captured animation straight into the editor.

The plugin is unfortunately still stuck in review phase due to problems at Epic side but once resolved it will be available here: DEMoCap Live Link Plugin. Documentation for the usage of the plugin you can find here: Wiki Page.

This is still an early access version. One of the remaning task before it becomes a 1.0 release is to improve the performance. Feedback is welcome as well as suggestions for changes/additions to improve your workflow.

Drag[en]gine reached 1.13 and has now the new DENetwork Library to connect all kinds of applications to Drag[en]gine games.

Drag[en]gine reached 1.12 and has a new demo project: Super Sponza.

Released the first version of the DEMoCap Blender Tools simplifying the process of importing motion capture into Blender and post processing.

DEMoCap made its appearance on the Steam Store. Also available now the Delga Distribution files for your projects.

Epsylon - The Guardians of Xendron takes the player on a journey to a futuristic world investigating a very special Science-Fiction setup. With a team...

Hey, I'd like to ask, I remember a feature that randomizes textures so that vast open space doesn't look artificial. Really useful for oceans or deserts and something that plagues many AAA games.

What was the name of said feature again?

If enabled you can use layered textures (3D textures) for individual texture properties (like color). Right now *.png3d is supported or using constructed textures: Developer.dragondreams.ch .

I have been looking forward to seeing this engine working and downloadable but after all these years I do not see this happening. On a number of occasions you have stated you only have to clean up a few things and finalize before release, that was nearly 2 years ago.

Don't worry. The release is slated for within 2-3 weeks from now. What's left currently is brushing up the example project so people get a grasp of what can be done as well as brushing up the documentation (Wiki side). Then the public GIT repo will be set up with an initial cast of builds (linux and windows for the time being).

Thanks for the great news looking forward!

Hello. Can someone point me, where can I download Drag[en]gine? I can not find it on theyr website, can't find on their Wiki, nor could I find it here. No prebuilt engine, no modules, no sources, nothing. How can I try it?

It's not available to the public yet. There are a few things I need to clean up and finalize first before I open up the repository. I prefer a solid first release than endless patchwork.

wow, this engine looks really promising. Sadly I use a mac and can't run it, Is there any plans for a mac version? It wouldn't be to hard to port it if it runs on Linux.

The engine is POSIX based. Only thing that has to be ported is the launcher as the rest would work out of the box. Only problem: I've no access to a mac. If anybody donates a mac strong enough to run advanced graphics it could be done. Otherwise I'm afraid not for the near future.

Darn, the problem is that macs are fairly pricy, It would be hard to find a person willing to donate a up to date mac.
Also just wondering, what is the launcher written in?

They are written in C++. This is though not mandatory. Every language able to link to a C++ library can be used to write a launcher.

Mod SDK & Community
Built a game for Drag[en]gine and want to support mods? Try mod.io, a cross-platform mod SDK created by Indie DB which makes it easy to get a mod community up and running in-game. Currently seeking games to integrate and promote