Epsylon - The Guardians Of Xendron

Epsylon is a game project based on the good old detective stories but taking it a step forward mixing it with an unconventional cast and a new game engine technology. Detective stories are in general static narratives with limited set of interaction and little replay value once the story is done. The player has next to no influence on the way the story unfolds. Here the Epsylon project hooks in and expands the game mechanics to allow the player to conduct investigation his own way. How the player conducts the investigation influences the world and people around him. An AI in the background reacts to the moves of the player potentially altering the course of actions. Besides the basic detective moves the player has access to some "characters" providing some special abilities that can be of help.

You are Georgo Valentino, a private eye. On your way looking to solve one of your longest standing unresolved cases you end up with a hunch leading to the parallel world Alpha-10. In this universe multiple worlds exist next to each other. Very little people know about this though. One of your friends, a scientist, does know. and he most certainly knows more than that. He has a special "friend" himself that he met while researching what is called the "Xendron", the multidimensional space. Arriving at Alpha-10 Georgo is quite surprised finding his "friend" having dropped off his little girl at his side as he has "own business" to take care off. You should learn soon that this little girl (Sean) has some special abilities that can be of help to you. And if that is not enough the organisation you end up with has two special "agents" (Odjin and Bahatos) at their disposal that have their own set of abilities to bring to the table. The interesting part? The little girl and these two special agents are dragons of different kinds. As it looks like they play an important role in the case to unfold.

Will you be able to solve the biggest case you ever had?

All your actions have large influence on the events in the world. It is better to conduct your investigation without force if possible. As you are a stranger in this world people tend to not tell you all they know so you have to find your own ways to gather the informations you need to crack the case. There are multiple ways to solve the case depending on how you approach the investigation and with whom. Be careful though with whome you talk and what you do. The underworld is watching you and will react to your snooping around. Counter measures can range from making "vanish" information you seek all the way to trying to silence you or people you got in contact with. Various features can help you on your way:

One of the key points is that the story is part of the game mechanics. It is not told to the player by hitting NPCs. The story is the main case in the investigation. So to learn the story solve the investigation. Depending on how you solve it you can learn more or less about the story. It is therefore useful to look sometimes deeper than requested. And who knows what influence your choices have on the outcome... or members in your team.

If you have installed the Drag[en]gine and/or IGDE using repositories or market place updates arrive automatically. Otherwise get the 1.8 release files from the Download Section. You can install it over the 1.7 release but it is recommended to uninstalling 1.7 first to keep the game engine directory clean.

To develop games you do not need the game engine source code. Just install the IGDE, create a project, run and distribute to *.delga file and you are done. Have a look at the Examples DELGAs.

This release is a follow for the 1.7.1 and contains some bug fixes and new features including (but not only): 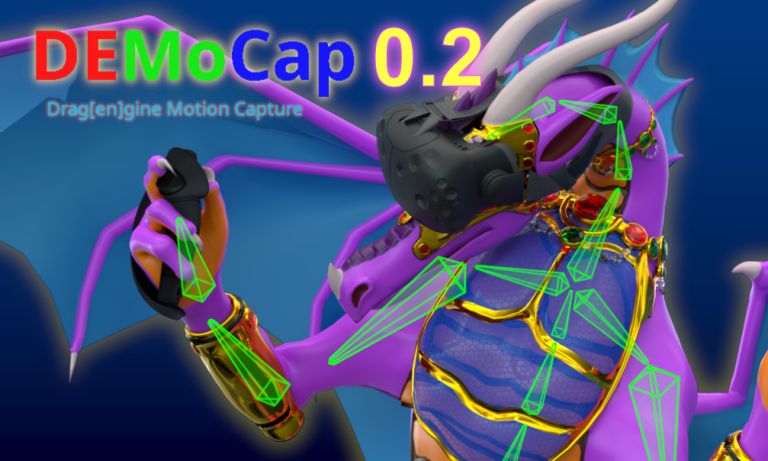 DEMoCap allows to do Motion Capture using VR equipment. There are various advantages to this technique compared to other MoCap techniques:

This release adds new features to simplify motion capture for your game projects (including Epsylon):

The public demo of the game will be delayed more due to external factors I can not influence. Here a little rundown of the problems I'm facing:

As you can see I'm doing my best to push the demo forward but unless these external road blocks are cleared I can only push the demo release further back.

If you want to support the Epsylon Game, the Drag[en]gine Game Engine or the DEMoCap Motion Capture Tool then here is a nice little green button that allows you to do so

A little pot-pourri from the work-in-progress public demo.

Getting the Drag[en]gine Released consumed large part of the beginning of this year. Now work is back on the game with various improvements based on user...

State your opinion on what "first dragon view" you prefer for Sean.

Been tracking this game for about 5 years now, still just as hyped as ever to see this game come out.

Where can i find the download for this game?

DragonLord - Do you need an Artist. I would be more than willing to help out where needs be. :)

P.S. - Where can I find the Binary version of the Dragon[En]gine? If there is one. I would like to mess around with the Physically based rendering pipeline.

Woah, you've been going on this for ages.

... and continues to. It's nice to come back after years and see updates. Keep going strong, guy.

i've been watching this for years (i dont mean this to say you should be working faster), good to see things happening

Yeah I know it's not the fastest. But if you are forced to do all on your own things don't go fast. I'll though implement in the time to come some stuff which should help me to get things done faster. Not optimal but it should allow this project to get somewhere in a reasonable time.

I'm sure you know the 0 A.D. team a bit, that game's Alpha took 9 years I heard.
But yeah, we look forward to updates till then!

you have to include some pretty pics in your updates, not just user interface pictures :)

Sorry, don't have an artist. I'm limited in what I can do.