In this devlog: Enro's 4 new layers are available to customize.

𝕵anuary is near along with the game's continued development.

And while I was waiting for January to come, I decided it was a good time to update Enro's layers.

In the article Color Editor is now serviceable, I demonstrated the then WIP color editor. Since Enro was the first character I was working on, his color palette was easy to implement with only 12 layers. I thought this was a good number and believed that it would be enough for everyone, but Escudo proved that wrong as she required an extra 4. There was no way that 12 layers was going to account for all the details she was designed with (and I argue that 16 still isn't). Thus I had to update the color editor to accommodate her, ending up with 16 layers and left Enro with 4 layers unused.

shows off his new layers

My original intention was just to leave them be as his color palette was already finalized but this went against the reason why the color editor was made public in the first place: to give the player the ability to express themselves with custom colors. Thus, with a bit of time left before we continue on development, I have updated the color editor to give Enro access to the 4 extra layers. 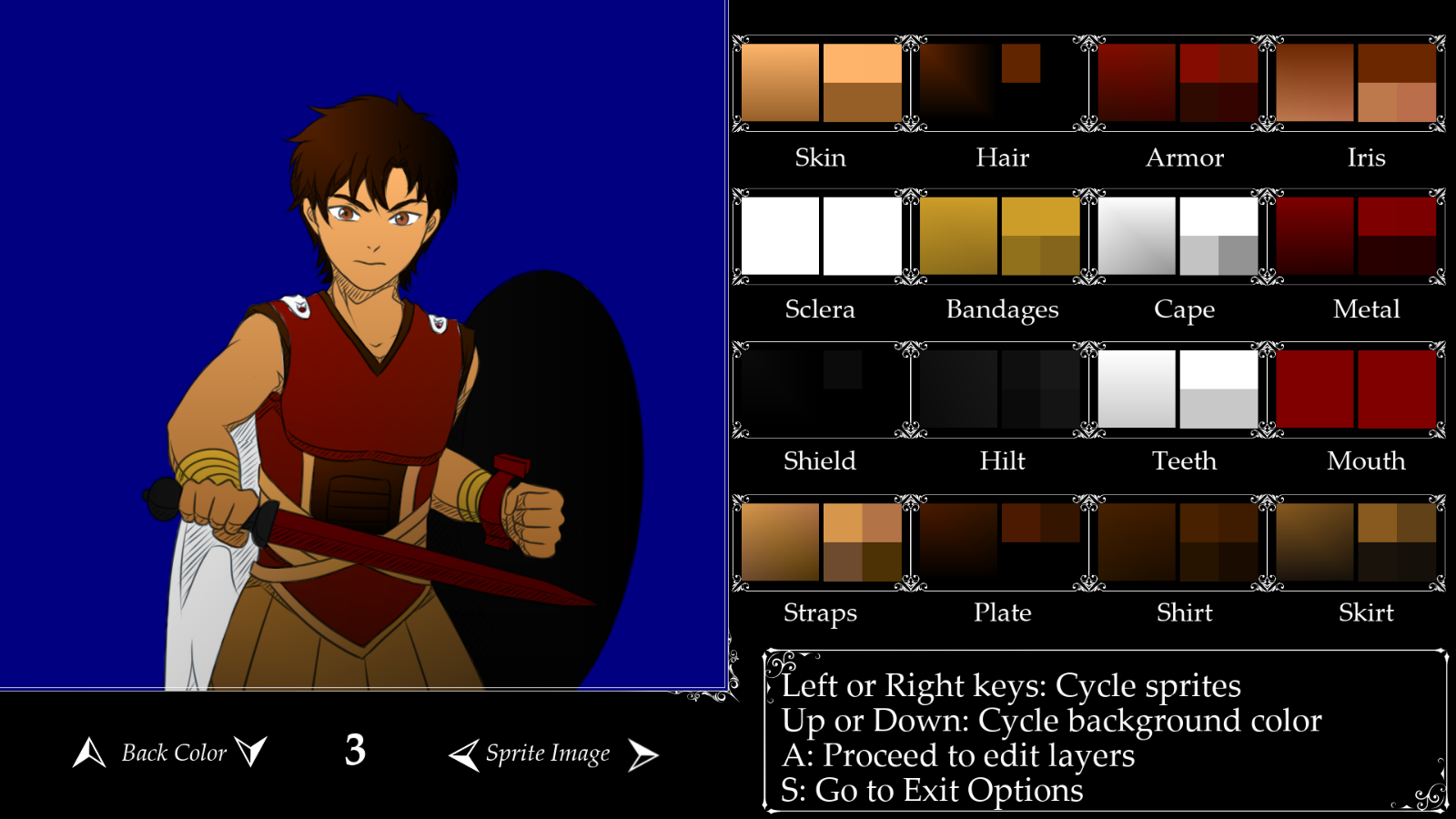 I decided that the last four layers will be the straps on his armor, the mid-section (which my concept artist originally intended to be a plate of some kind), his shirt, and his skirt.

I'm sure there is a way to actually optimize a single script to work on all of them but the reason why I opted to use unique blocks of code for each instance is due to the way each instance is coded. What draws the sprites during gameplay is not the same for the sprites in the color editor. I figured that since these were unique instances, unique code was required for each situation. Enro has code for every instance required to draw him, and I had to go into every single one of these instances and update the code manually.

One thing to note is for those who have already made custom colors for Enro. I'm sure you would prefer not to have them lost in the update and have to start all over again. With this in mind, these layers are being added in a way that simply overlaps on top of the old layers. Temporary code has been added to detect if the new layers have not been edited and take the appropriate colors from the old palette. This isn't a 100% solution as the gradients are also being taken as is and the way it detects if they have not been edited is if all four layers are completely black. The latter is why this is temporary code because if you do want to make the four new layers all black but not everything else, this will not be accepted by the code unless you, at minimum, use a very marginal amount of light in at least one corner of one layer

The layer for the armor has also been edited and the bottom corners will have the bottom palette much more concentrated (i.e. if the bottom corners were dark, they are going to be much more darker due to the change of layers). There's not much I can do about that so please bear in mind that you will still need to go back and edit the values of the gradients for any previous edits.

There is still some work to be done with the layers. The last update made the weapon and shields of the player flash when they are about to attack. This is done with their appropriate layers but since those layers were tucked behind other layers, the layering for them was not perfect. Under normal circumstances you would not notice the imperfection, however, when your weapons are flashing, these imperfections are very noticeable. That's why I have to edit them to fit the weapon but I figured it's not such a deal-breaker that warrants immediate attention.

Finally, I'm also going through the other characters and see if I can work with 16 layers on them. After Escudo, all but one character looks simple enough so it may be the case, but it wouldn't hurt to check just in case. In the case of that one exception, I don't want to spoil much but let's just say that one character may require some thought to fit 16 layers into due to their unique patterns.

Make sure to also follow the progress of the game on social media. And come join us at the Discord server where even more updates will be made on a constant basis.

And wishlist the game on Steam: