Post news RSS Devlog 09 - I kid you not, he turned himself into a CAT!

We now have Lego like tiles! A mascot! BUGS!!! And much more. This has been a really good week at ShriekingGames but we have much more to give!

Exciting news and content this week! We have been working a lot with the "stuff" prepared last week but we also have new and improved cool stuff!!

We have... Mechanics, new Models, Rigging, Materials and Tiles, WorldBuilding. Let's get to it.

Not a lot done this week in terms of new mechanics, but we have a new camera settup and also the NPC picking up the "cat" has been refined.

3. Getting caught by Ms. Karen (lady). She is going to be a guard... Eventually

So we have been working on new models like props and assets for characters. We also have a mascot now. It's little careless Cat inspired in a "devon Rex" but it's subject to change because we are not really sure if they were common in 1974 (more on this later). 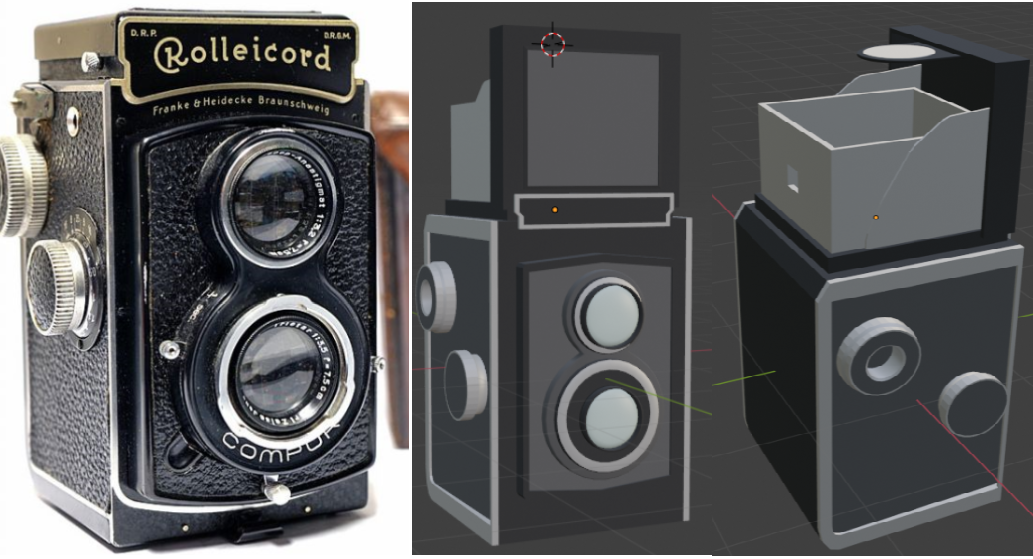 4. We have a rolley cord that will be used later on a game by an NPC. He has a cool story and if you like TRUE FACTS we have based his story on real life (like most of the game). He used this camera. 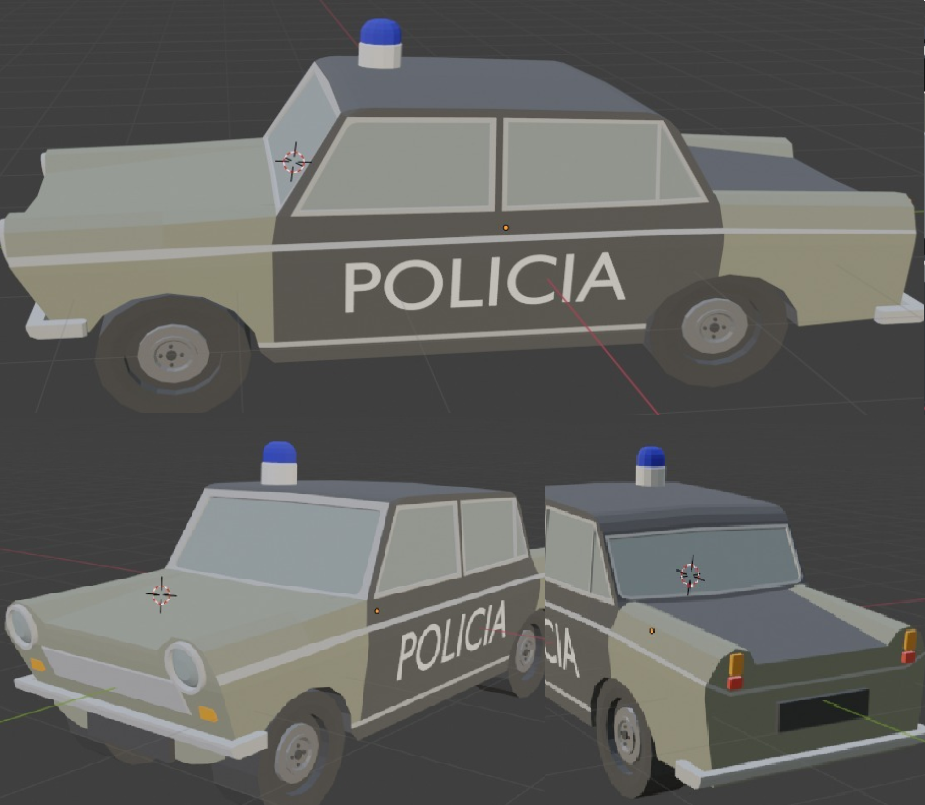 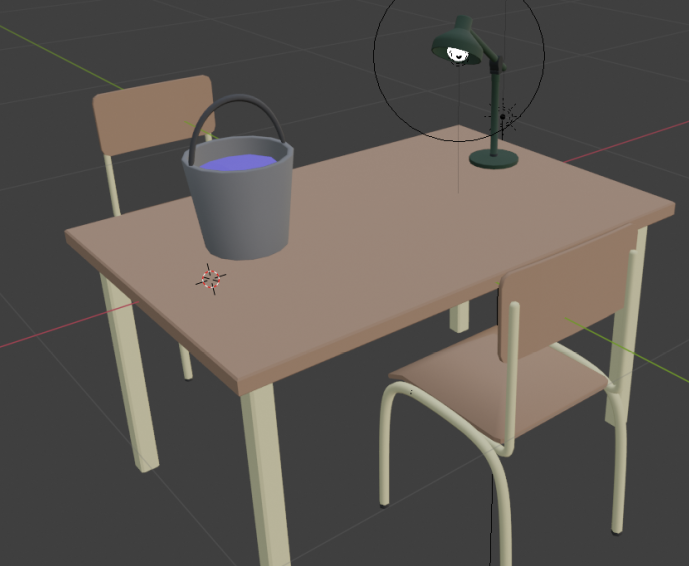 6. Props for the interrogation room.

8. We finally have a mascat! It's a cat. It doesn't have a name yet so if you have any cool ideas feel free to write them down.

As said earlier, the cat is based on a "devon Rex" we made a fiew different patterns for them. There is a small inconvenience tho... We are not sure if this species breed was in Portugal at the time so we might change it a little bit so it looks more like a normal feral cat.

We need to animate the cat so we are working on a basic rigg. It is done and the cat is "properly" rigged. Here are some poses we used to adjust the "weights": 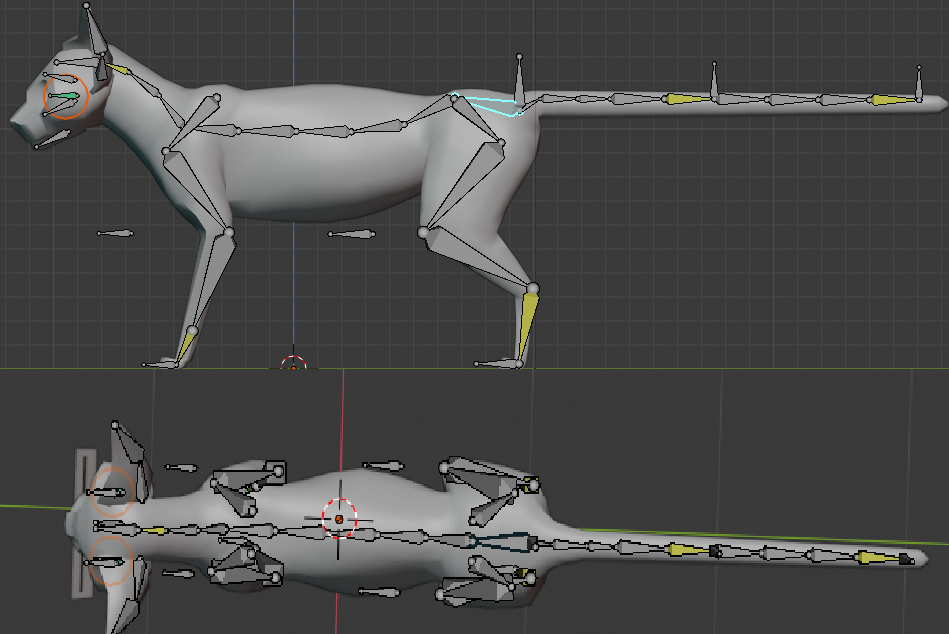 9. So this is the rigg. Fairly simple but good enough. 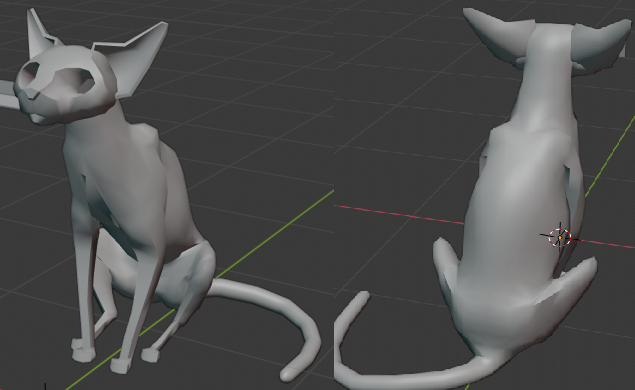 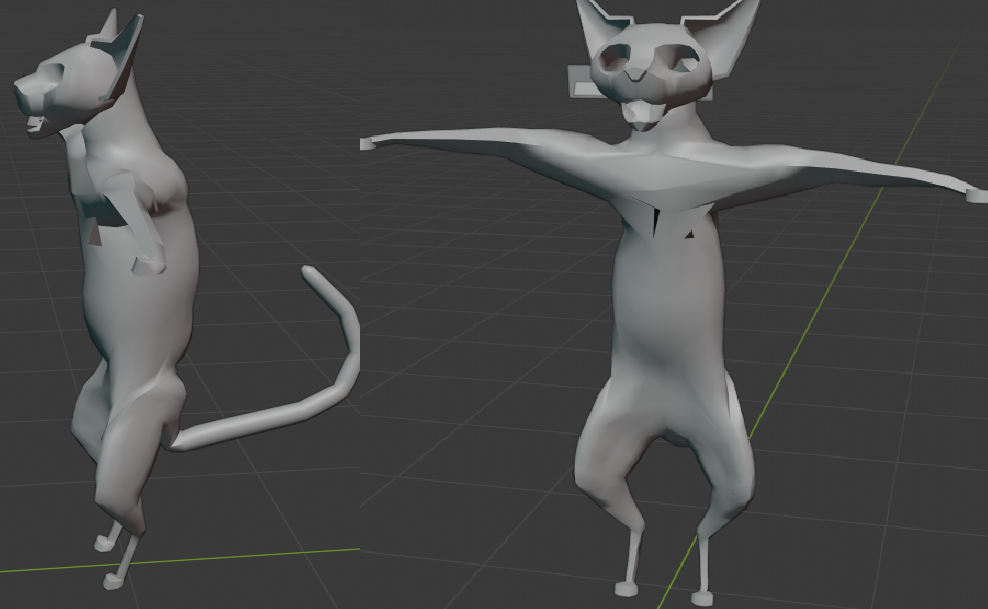 10. Cat poses. Here we are just trying to break the mesh and we have a lot of fun making these wierd poses.

We have been working with substance designer to make new materials. Currently we are making some floor tiles and they look really cool. 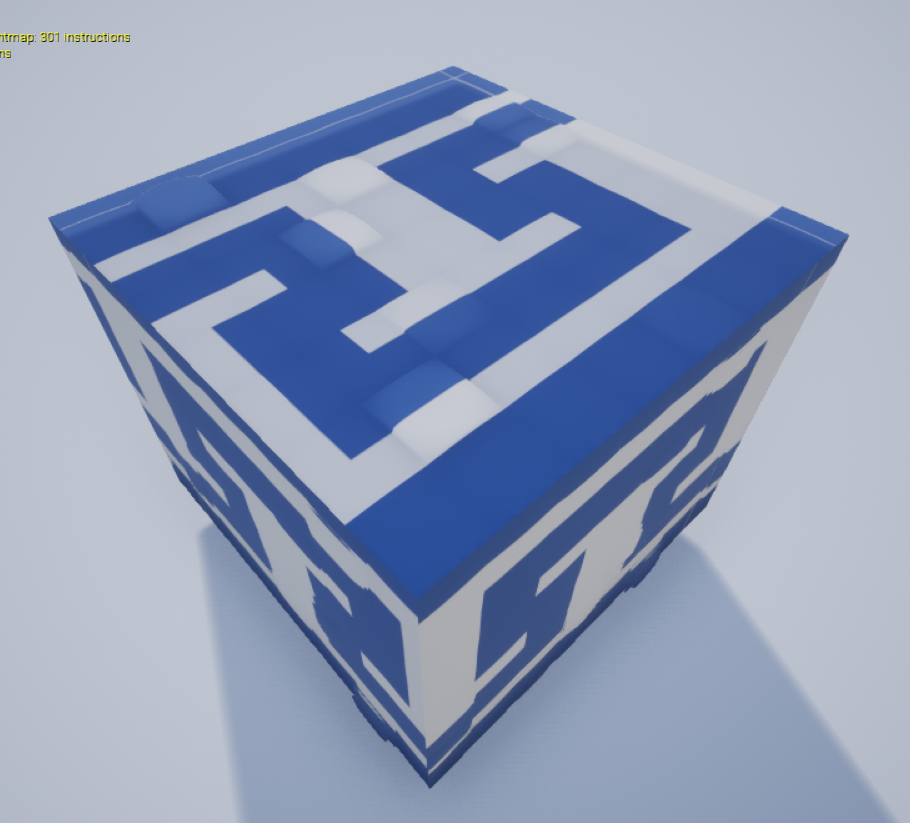 12. We have a better looking one with much more detail but sadly it doesn't really fit the style of the game so... We had to tone it down :C

13. These are the tiles in game, They have some height made using the tessellation feature in UE4. They were aplied to a simple tile with 4 vertices!!!

The scene is really close to being done. We hope to finish it this week but this is how it is currently looking. We also need to make some changes in the buildings so... They might look different in the upcomming weeks. 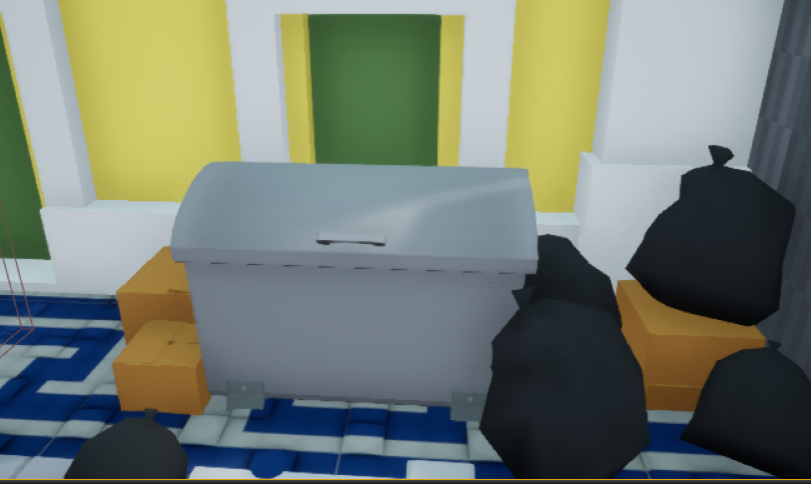 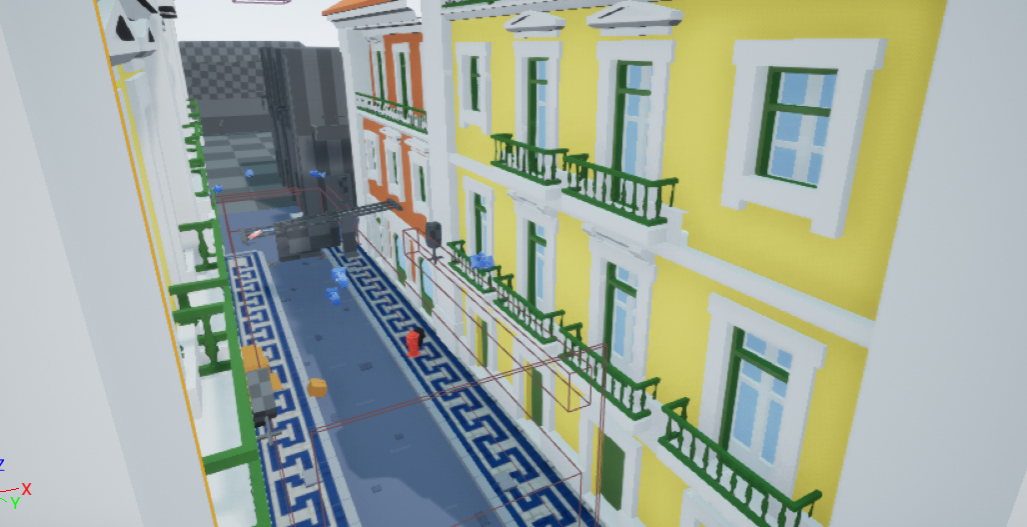 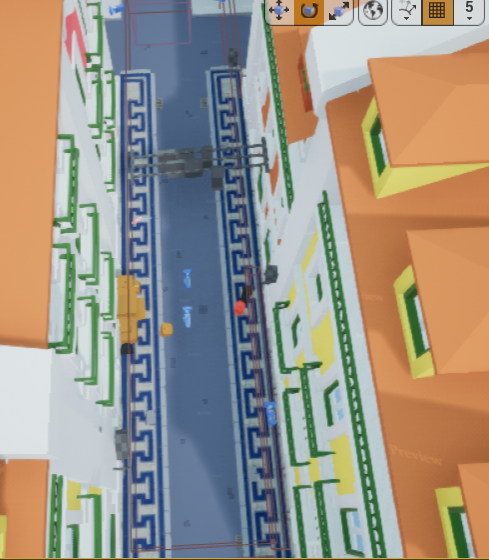 14/19. Wordbuilding!!! Some adjustments to be made but looking nice.

There is one big problem tho. When we try to build the light in the level it looks like this: 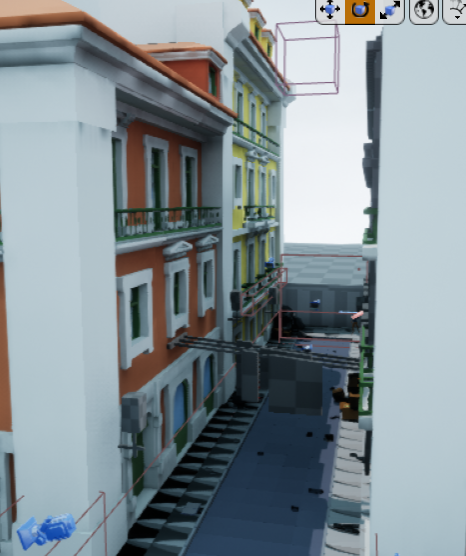 20. If it doesn't look bad trust us... It is. The textures, materials are really wierd and some of the meshes don't have light maps so they look horrible.

21. We didn't want to end this devlog in a bad note so here is the "cat" walking around in the street.

And that is it for this week. Remember that our team is made of 3 members so the content takes time to make. Thank you for being patient and supporting our game in social media and when watching our devlogs. We will be working hard this week, specially because it will be 25th of April and we will release content on twitter regarding that (follow us if you haven't already).

We hope you liked this week devlog and our new mascat. Let us know if you are enjoying the game progression. We don't have much feedback from you yet so if you can and are interested, we will hear you out.

The artstyle you seem to be going for vaguely reminds me of the Sly Racoon games. Maybe you could lean more into that - only if you think it would fit your vision, of course - by making level geometry a little more wobbly and crooked, while exaggerating some of the most prominent features on your characters' models. Make the world look almost hand drawn.

Btw. the G3 is a German made rifle from Heckler & Koch. Portugal adopted it as it's service rifle somewhere around the 60's though and used it up until recently.
So technically, it's not a Portuguese rifle.

Thank you for the support. We are trying to resemble somewhat goose simulator but we want to create something that is our own. We find that there are some discrepancies and are working on those. Regarding the weapon, you are right, we should have looked further into this. We will change that right away ;)

Alright, cool stuff. I like the idea behind your game and I'd like to see what it looks like when it's done.
The goose simulator inspiration sounds good to me.