The realm of the living has been corrupted to its core and a storm is coming to change the world order. This storm is you, a mighty Necromancer, a sorcerer who denies death and leads the legions of the dead. Clerics and lords hope to hide behind high walls, but there’s no stronghold to cover them from your wrath. Smite hundreds of those standing in your way and turn them into your tools on the way to a greater purpose.

The Unliving is a dynamic rogue-lite action RPG with strategic elements. Raise the undead, use numerous spells and explore a mystical world, all realised with darkly extravagant pixel-art.

TURN ENEMIES INTO YOUR UNDEAD ARMY
Each fallen foe can be resurrected and added to your army to create unlimited legions of the dead. These re-animated creatures have their own unique abilities, such as the undead Priest whose blessings in life, will now curse your enemies in death.

CRUSH EVERYONE IN YOUR WAY
Only some of the living are helpless victims, the rest can retaliate against your forces. They hold the line, move in large groups and wield powerful abilities too. They cherish their lives and will not fall easily, so unleash hell as the Undead Lord to bring them to their knees.

CONQUER UNCHARTED LANDS
The world is randomly generated for each run and is richly populated with an array of creatures, artefacts, secret rooms and deadly traps. Each part of the world is occupied by a variety of living inhabitants - invade villages and slay feeble peasants to reinforce your army or engage in a desperate fight to the death in the swamps against formidable foes.

UNRAVEL THE MYSTERIES OF NECROMANCY
Collect cryptic notes, force answers out of your enemies and study the writings of the ancient artefacts to gather the lost memories of the Necromancer piece by piece as you reveal the nature of his immortality, the secrets of his phylactery companion and find out the grim truth about the supreme hierarchies of the Church.

BATTLE EPIC BOSSES
The powerful creatures of this shadowy world will do all they can to stop you. Each boss has a unique fighting style and set of abilities, meaning deftness in combat and strategic thinking will be crucial in emerging victorious from these grueling encounters.

DIE AND RISE AGAIN
The ability to deny death itself is the greatest secret of the Necromancer. Another mortal strike is merely a setback for him. Take a lesson from your death and don’t let your enemies catch you the same way twice.

Hi, Necromancers! Although you haven't heard from us for a while, we have been working on The Unliving throughout this whole Summer. So here's what we've been doing lately.

Our art team has been creating The Capital – it's the 3rd location you'll lead your undead armies through in The Unliving. This ancient city rises high to the skies, embodying the strive of its inhabitants to reach the heavens – albeit, its shiny facade hides a dark foundation. The location is still in the work-in-progress phase, but we can share these concepts to give you a general impression: 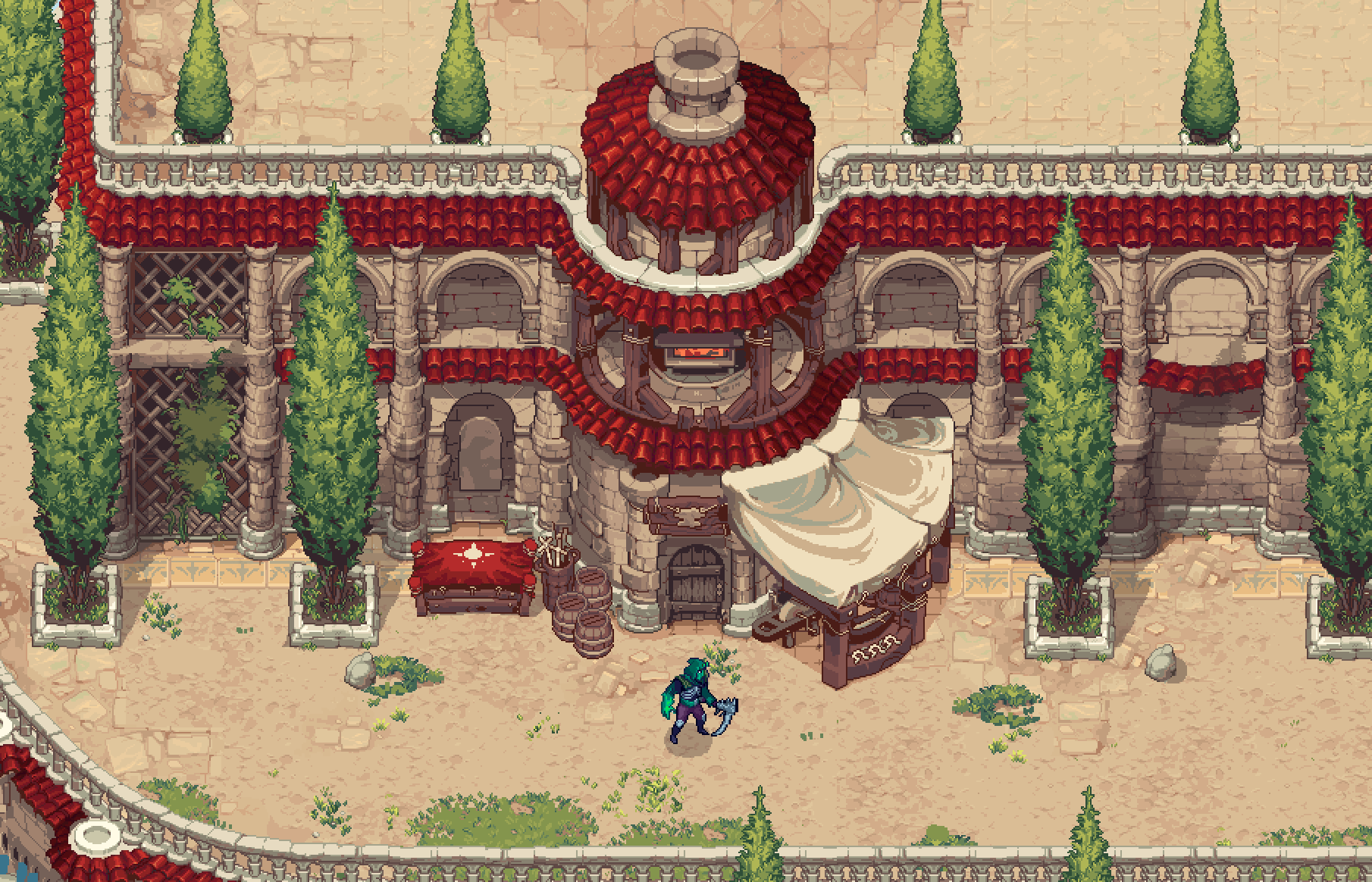 And this is one of our early concepts to outline the layout of this level: 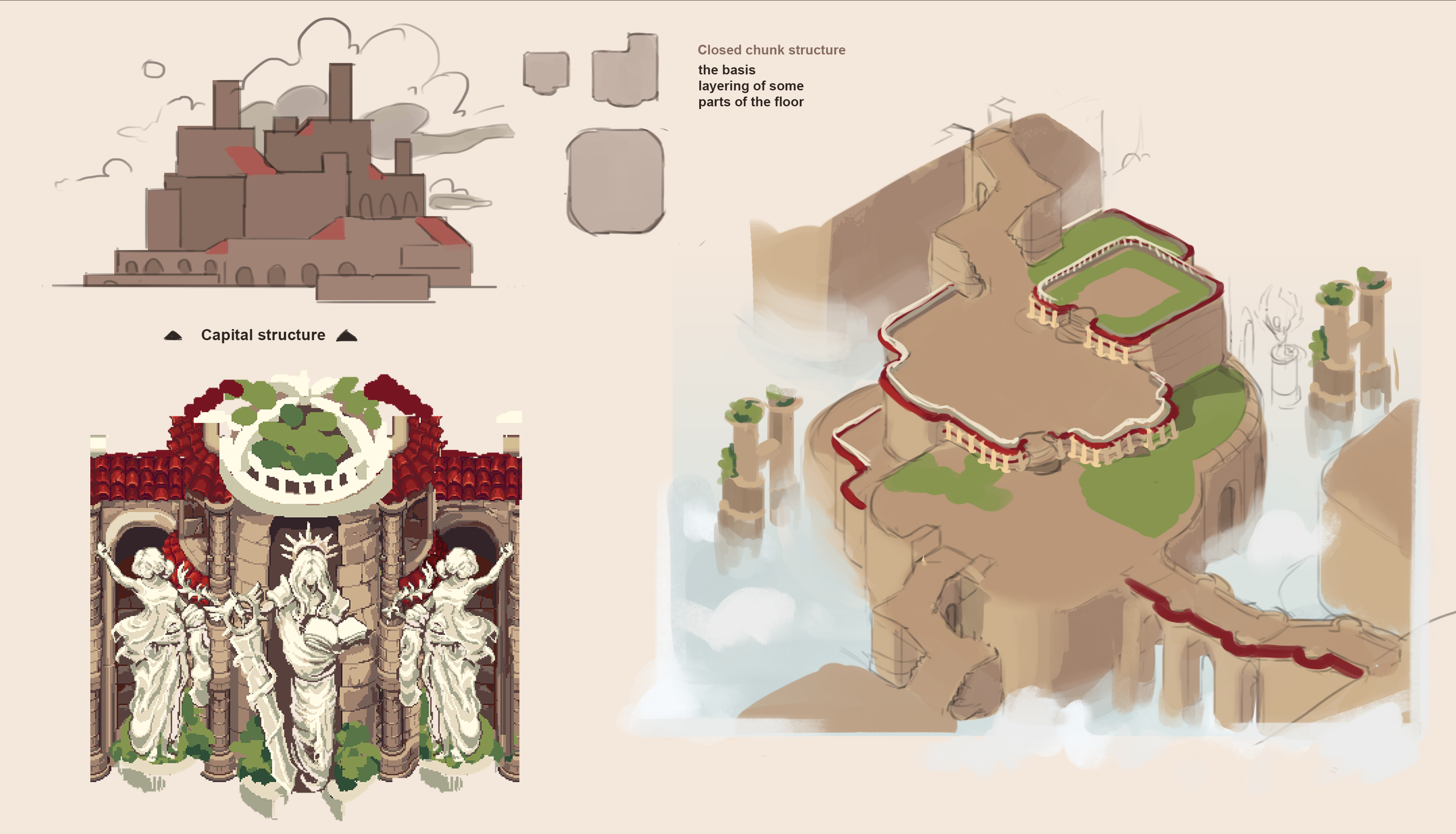 We've been also working on several abilities that Necromancer will be able to use to give you more variety and options to choose from when you lead your army of the undead against the Church of Zolar and more otherwordly foes. Here are some gifs showcasing the latest abilities that we have come up with:

Fireworks – an ability that detonates nearby bones that drop out of the undead upon taking damage.

Phantasmal Army – сreates aggressive wraiths from the Echoes – remnants of the life-force that spawn upon the death of each creature.

Blood Tide: Forms explosive goo from the blood spilled by the living.

In the meantime, our 2nd major location – the Swamps, needs to be populated by a new set of creatures to fight and interact with. That's why we have been digging through the hundreds of visual references, drawing and throwing away dozens of concepts – all to create the most visually interesting creatures and make them exciting to look at. They are the Mirefolk (melee), the Slinger (ranged), the Mirefolk Warrior (pulls enemies), the Dryad (summoner), the Ashbringer (fries his enemies, but has no VFX just yet to showcase that), and the Commander (focuses his attack on Necromancer) unit concepts. These all are just drafts and will require more work in the future.

Several of the following tasks are still in the stage of research and development, so we won't be able to show you much just yet:
– A brand new mechanics of distributing Combat Resources – the ones that will be spawned during the combat and picked up by the player to amplify the abilities of Necromancer and his units;
– Gamepad controls implementation and balancing. We need to make The Unliving work smoothly with the gamepad – basically all of them;
– We are experimenting with the health drain and restock system which is still a bit of a tricky thing. As the health of the Necromancer is tightly knit with his combat powers, we need to invent something really interesting rather than just a plain health-bar.

That's it for now, Necromancers! Keep your scythes ready for more content in the future. Sorry, that it takes so long, but as you can see, we are doing our best to give you the game which is captivating and fun in the result!

Important notice. Our game is still a work-in-progress – features and content demonstrated in our devlogs can be amended, substituted in favor of another content, or become completely unavailable in the latter stages of development. We hope for your understanding.

We are thrilled to announce we have partnered with Team17 to bring you The Unliving. Check out the announcement trailer!

Learn about enemies that you'll meet in The Unliving.

Devlog: The World of The Unliving

Hi, everyone! Today we would like to tell you where the story of The Unliving unfolds and who you will have to deal with during your journey.

You're great! We need more games about necromancy. Voted for you in "Indie of the year".

Indie
Twitter
Tags
Embed Buttons
Link to The Unliving by selecting a button and using the embed code provided more...