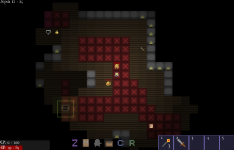 This version adds a few new features: Elite enemies, elite items, and 3 new classes. It is also includes a series of bug fixes and balance changes.

The newest version of Through adds Altars and Ghosts.

This update adds class and race selection to the character creation process.

Version 2.3 of Through adds vaults, new enemies, and magic resistance! This is the downloadable version for Windows users.

Version 2.3 of Through adds vaults, new enemies, and magic resistance! This is the downloadable version for Mac users.

2.2 brings elite monsters, elite items, and a few new classes, as well as a series of balance changes and bug fixes.

2.2 brings elite monsters, elite items, and a few new classes, as well as a series of balance changes and bug fixes. This is the first mac downloadable...

Newest version of Through adds altars and ghosts and removes the food clock. Check out the news for a more detailed description of the new features. Head...

A complete rewrite of the game in a new engine. Totally rebalanced, new abilities, new items, and new monsters. If you liked it before, it's more of what...

I really love this game. :D

Finally got a chance to try this out. I really dig the minimalism. I enjoyed the tactics provided by the different choices of wands and spells.

May I ask which or what 2D toolkit did you use to create this?

I used the Unity engine and wrote my own 2D code to display it. I figured if I had time later to clean up my code, I may try and make it open-source, so I wanted all of the code to be open-source or written by me so I could.

Ahh cool the open source would be nice. I was looking for some 2D toolkits for Unity3D that were free.

I've used RagePixel before, but it was discontinued so I stopped using it.

Through 2.3 is now up for authorization. Should be available soon!

Are the sprites by Oryx?

requiring luck is half the fun! this is a roguelike after all.

this game is awesome. one problem with the latest patch is that food is completely worthless. it should either be removed entirely or given a use. also, witch is clearly the most powerful class do to its power of even on the most powerful difficulty killing everything in site with its wands. the alcemy ability plus high int allow you to build up an incredible supply of wands, and poison wands can kill anything. i think you could make melee builds more viable by making more weapons and shields, more powerful ones being found at higher levels. with more powerful melee weapons, melee builds could be as powerful as witches.

Thanks ersan! I really appreciate the in depth feedback. I accidentally left in the starting food, but it will definitely be removed in the next patch. I agree with you that melee builds need to be more viable in the mid to late game. Powerful late weapon drops is a good idea, but I worry about putting in something like that that requires a lucky drop. I'll see what I can come up with. If you have any more suggestions or thoughts, please post them here or email me (willswannack@gmail.com).

Indie
Twitter
Tags
Embed Buttons
Link to Through by selecting a button and using the embed code provided more...