Thanks for voting and helping Elfsquad7 on it's quest to become the 2022 Indie of the Year. You are now in with a chance to score some free games. Help this game secure more votes by embedding the widget (or link) we have included below on your favorite sites.

So it's finally done...ELFSQUAD7 is golden, approved, and is now live on the Xbox Indie Channel. My first released indie game! Huzzahs and WOOTs all around!!! 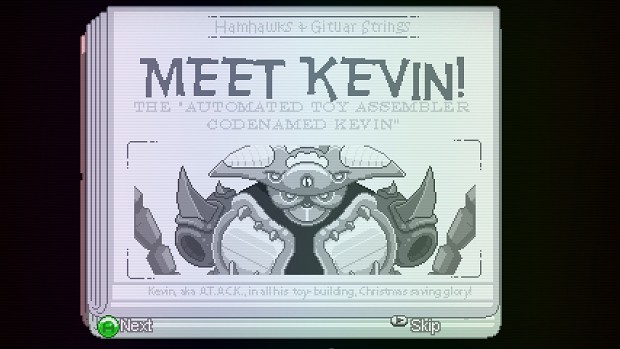 But the big news for me is that I was able to snag a publisher to head up the marketing and PR...and as all indie developers know, getting press is a HUGE part of the battle! THANK YOU STARDOCK FOR LETTING ME FOCUS ON THE GAME AND NOT PRESS RELEASES AND MEDIA GROVELING FOR ATTENTION. :) Of course I had a foot in the door since I've worked at Stardock for 12+ years now, but it was still nice of Brad to offer to field the marketing for me.

Anyways, let's talk CONTENT. "What do I get for my 80mspts," you ask? "What holiday deliciousness did you stuff this game with?"

- Wrap n' Grab gameplay (I've seen a few reviews compare it to "Bubble Bobble")
- 18 unique stages, broken up into 3 difficulty levels (so 6 Easy, 6 Medium, and 6 Hard)
- 6 Hero Characters to pick from (and 2 unlockables)
- 10 Items to purchase in-between levels
- 1-4 players, local co-op, with post-level stats and rankings for bragging rights :)
- Destruct able Environments (the lego-esque stages are some of my favorites)
- Full Soundtrack (each stage has unique music)
- 3 different enemy types and a unique end-game Boss 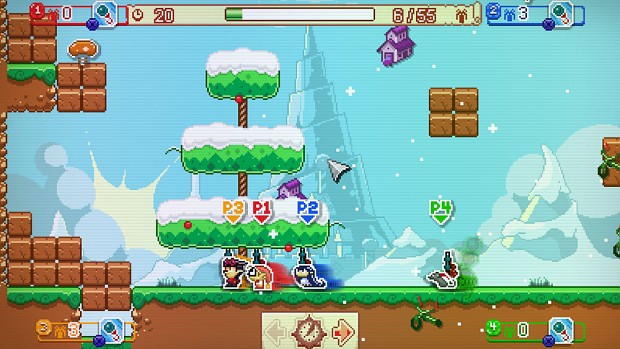 Have a few reviews coming in, all pretty friggin' positive...worst I saw was that someone beat the game, on easy, in 10 minutes. This isn't surprising since Easy is really for Grandmas and Babies, but I would like to put out an update that addresses single-player replayability. All my tested tended to be with the MP, so perhaps some SP-friendly challenge rooms are in order. We'll see what I can muster the energy for :)

So I highly suggest, if you have an Xbox360 and will be hanging out with family or friends this holiday season...pick up ELFSQUAD7 for some co-op, Christmas saving gaming fun!

Now that I'm not making ES7 I can take more time to chat about it! Next journal we'll look at the GAMING INSPIRATION behind some of my favorite set-pieces of Elfsquad and perhaps get some feedback from you about how ELFSQUAD7 actually turned out. Happy gaming!

You Have No Chance to Survive Make Your Time!

Time is against me as I remember approval is needed to get up on the Indie marketplace! Also, I do some playtesting with my coworkers...and the feature...

Weapons, Items, and a Pink Cat with Manliness Issues

Item shops make any game funner, right? Right! Plus, I'm looking for more help - this time, with the naming of a certain shopkeeping kitty!

Lets take an look at the past, present, and future of ELFSQUAD7!!! Also, join in the game design by posting your all-time favorite gifts!

Who doesn't love a good Christmas game? Elfsquad7 will be THE holiday game that EVERYONE may hear about and you WILL perhaps even play!

Mmm, this looks like fun. Too bad I didn't make it to the early Indie Royale bundles.

I'm sorry, i found the gamplay to be way too boring for my taste.

No prob...I went back to play recently and it defiantly lacks something in single-player. Time to start work on Elfsquad7 2012, eh? :)

Heh, probably, i did try it in singleplayer. I imagine it would be a bit more fun in multiplayer, but i found the gameplay to be a bit limiting.

It is possible to play with one player only? Bacause the game always wait for second player imput :(
and then the other player stays on the ground, or I can controul bought with other hands

Weird...hadn't heard of that one before. Your playing the PC version, right? If your tryign to play with the controller, try pressing ESC on the choose character menu and it should stop waiting for player 2 to pick a character.

Let me know if that dosent work.

I'm waiting for the PC version .

I've heard a lot of people that are holding of for PC...it that because you dont have an Xbox, or the indie channel is too tough to find?

Thanks man! If you get a chance, let me know what you think of it! :) All ears when it comes to feedback and critiques!

Also, in case you didn't know, only a few countries have actual access to the chanel. I live in Belgium and I can't buy Xbox Indies.

Anyway, since it was included in the Indie Royale bundle, I'm a happy man again ;)