Once the Tumballs lived in a wonderful land, full of water. Now the water has gone and it's up to you to get it back! Journey through 3 stages across 30 levels facing ever increasing challenges to free your friends and save the land!

After a few reviews I spoke with some of the people who have already purchased Tumball and found that they consistantly thought the screen resolution was poor and ruined the graphical appeal of the game. I've since then put all my efforts into resizing the game and an update will roll out in a few days. The new update features nicer GUI and menus, a larger view making it easier to solve puzzles and find your way around and a change to the story telling that explains more and generally increases the feel of the game.

This update will only roll out after a few selected beta testers have given it the all go, as to avoid any unwanted problems. In the mean time I've uploaded some of the comics that appear in game through out the stages for you to take a look at.

Here's the first one: 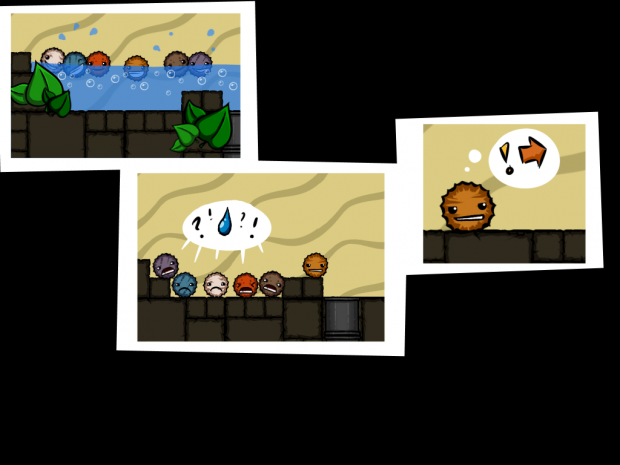 The other thing I'd like to mention, after conversing with Framer is that sometime later this year Tumball may be featured in an interview in the Macedonian IT Magazine Enter ! This would be an amazing opportunity for me as a young upstarting game developer so I'm very much looking forward to it.

That's all for now. I'll post again when the HD update is released.

There are some things yet to do. And initial feedback has already given me incentive to change things.

Once upon a time the Tumballs lived in a wonderful land, full of water. Now the water has gone and it's up to you to get it back!

3 Days - Tumball and its History

A brief recap of what Tumball used to be and the journey it went through to become what it is now.

Tumball will be released on Desura in 5 days! I quickly outline the events leading up to the 11th.

hm. I got that "unexpected error as well. I just went to where the game was installed and ran it with admin rights and it worked fine. As for the game, it's pretty fun :) It takes a while to get used to moving tumball around though. I do recommend playing in fullscreen though, because I occassionally clicked outside of the game window when I played in windowed mode. Nothing terrible happens, it's just pauses the game until you click in it again. Great job on this game Sydan!

I'm really glad you enjoyed Tumball, thanks alot for buying it! :) I'm sorry to hear you had that error though... What operating system are you using?

I'm unable to reproduce the error... so I think I'm going to have to talk to the Desura team and see if they know anything.

this looks like an extremely fun game :D, but unforunately i can play it because an "Unexpected error has occured with the game". :(

Oh. That's not good. Is it a Desura error or something else? If it's a Desura Error you may need to contact Desura themselves. If it's a general error or looks different send it to me and I'll get on it right away.

Oh. That's not good. Is it a Desura error or something else? If it's a Desura Error you may need to contact Desura themselves. If it's a general error or looks different send it to me and I'll get on it right away.

Right, as far as I am completely aware in my testing the patch is clear of bugs. It should be verified by Desura admins very soon I hope!

Brilliant! And the High Def update is coming a long nicely :)

Annoyingly desura's system requires admin verification. Until the file is updated just ignore the bug (click the ignore button) if you come across it. I'm sorry for any inconvience!

Why should admin verification be a bad thing? It's all to ensure that everything works as correctly as possible - a human verification. ;-)

It's not usually, I just live on the otherside of the world to Desura so I release an update and it can take up to 24 hours longer than usual to get verified.

Still fixing error. Doing my best to have it all clean asap.

Still fixing error. Doing my best to have it all clean asap.

Lair of the Evildoer Arcade