Lets take an look at the past, present, and future of ELFSQUAD7!!! Also, join in the game design by posting your all-time favorite gifts!

Greetings, friends! As ELFSQUAD7 continues to manifest itself and I anxiously watch the weeks dwindle, I'd like to take some time away from code optimization (yawn) to critique the projects roots, show off where it's at, and talk about what's next.

Around 10 years ago, I was working on a flash game called "Elves Inc.". I think it can still be downloaded here [http://www.stardock.com/files/elvesinc.exe] though it hasn't fared too well over the years. At least the backgrounds that my friend Paul made still hold-up.
Bleh...I couldn't even get the titlebar to be named correctly (you boot it and it says Flash in the corner). BUSH LEAGUE!!!!

Very simple premise, but sometimes those are the best designs (since feature creep always finds a way into your project).

This time around, I wanted to use the project as a way to test my new engine, which was being used for HELICOPTEROPOLIS and would be used for future projects.

I was able to get a basic version of the game up in 4 hours, so with approximately 3 months of development time I figured it'd be a safe bet for the XBox indie scene (and PC, in some form). The current alpha looks something like this...

I loves me some retro style...still needs some background art and sfx love, tho.

My major upcoming tasks are to get some real hazards into the game (a countdown timer is NOT an interesting foe) and to flesh out levels. If I can get that done by the end of next week, I'll be looking good to polish-polish-polish up until release (and perhaps sneak in a few unplanned features).

The major premise of the game is that toys are falling and you have to wrap them. You can see in Elves Inc. there were 3 toys that would fall...this was lame. In the current version I have letters indicating what color the toy is....wrapping big letters is ALSO lame.

I would like to hear from you what some of your favorite gifts were growing up. Whether from the Winter-centric holidays, Birthdays, St.Patricks Day, whatevs. If you have a pivotal gift that you don't mind me digitizing and throwing in the game (especially if they're primarily red, blue, green,or purple) let me know!

"Ginsu Playtime Polly" - an awesome toy, but only if you like to die.

Anyone that lists a toy that makes it in can get mentioned under "Design Help" (because, honestly, it gets a bit sad/lonely in the credits on a one-man game). :( 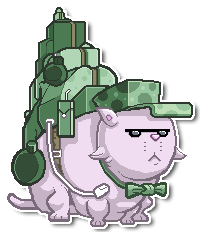 If you want to be in the credits, feel free to email me at scott@stardock.com and I can get your name/alias in :) Thanks for the suggestion!