Post news RSS You Have No Chance to Survive Make Your Time!

Time is against me as I remember approval is needed to get up on the Indie marketplace! Also, I do some playtesting with my coworkers...and the feature slicing begins!!!!

"Why, hello mid October! You really creeped up on me, didn't you!"

Like all projects, I'm looking at Elfsquad7 and wishing I'd have an extra month for polish, but alas, to get it out in time I'll need to submit it for peer review by the second week in November. Needless to say...it's time to wrap things up on my little Christmas game.

So, the first step towards finalizing the game was to get it playable for gamers other than myself. I was hoping to get a PC demo up here for feedback, but I don't think time will allow it. Instead, I'm focusing on the XBox360 version, where my gamer co-workers have been putting Elfsquad7 through the lunchroom grinder for the last week.

The results have been eye-opening, but have made the game more fun and accessable (especially in MP, where I really want the game to shine).

- TIME -
Biggest change from feedback came in the form of how time is managed. Before you had 1minute+ to finish a level, but with no real way to put time on the clock. This resulted in a lack of pressure 80% of the time, then panic or hopelessness the other 20%. My co-worker Alan Batsford suggested a more "Racing Game" approach to the clock, where there's initially less time available, but more time is given based on checkpoints, which has worked out nicely.

The sundial "checkpoint" of Elfsquad7.

- PURPOSEFUL PLATFORMING -
Originally each stage was going to be single-screen affairs like the original. Ever since expanding the size of levels, however, I've been looking for an interesting way to incorporate the platforming aspect. Placing the Sundials in out-of-the-way locations forces the player to traverse the landscape and allows for interesting level design.

- WHO AM I? WHERE AM I? -
Things get hectic fast when 4 players are in the game, so a lot of attention was given to making each player identifiable by color (player overlay, colorized UI, and trails). We're testing on a 15 inch analog set at work, which made it all the more vital to the experience. 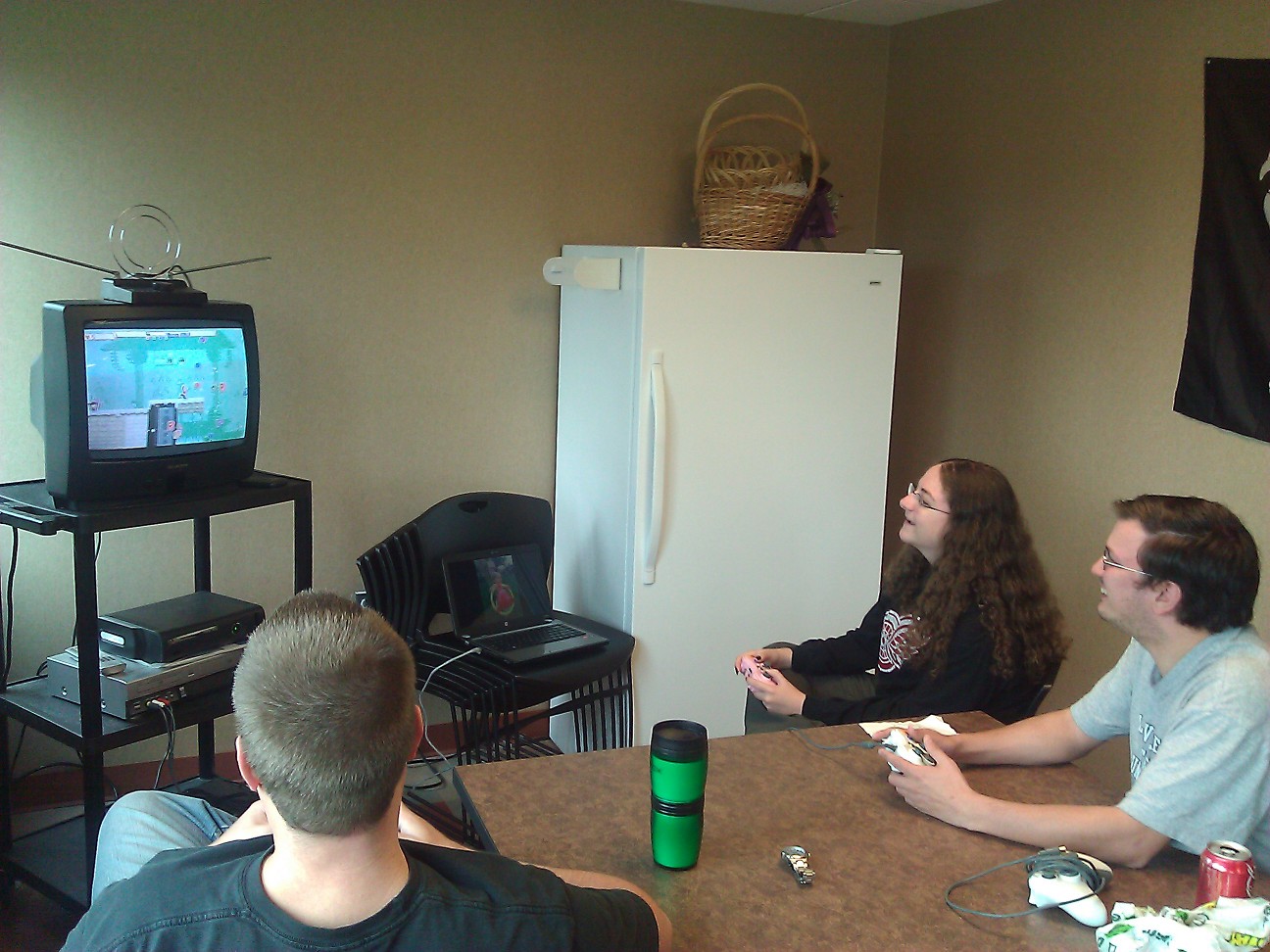 - ITEMSHOP REVISITED -
Instead of the Item Shop working like a traditional shop (you buy items and instantly get them), some feedback from my co-worker Leo Li led me to rethink of it more as a "Recon Shop". Now, you're unlocking possible item drops from above...

...from G.I. Jimmy Wiskerkissies. Hit the crate he's holding and a powerup will drop, cycling between all the items you've unlocked.

- SO LONG, EXTRANEOUS FEATURES! -
Well, it always seems happens at this stage...the obligatory "cut features to make the date". I'll save the details for it's own "Post Mortem" writeup, but I've definitely had to prune things back to make my to-do list more manageable. I had a combo system I was proud of that had to get cut, and a level editor that won't make it in, but as long as the core game is polished and fun they won't be missing.

This will probably be my final journal entry until I can officially write up a "Gone Gold!" announcement, but hopefully you can join me over on Facebook where I'll be throwing out status updates on how things are progressing.

See y'all in two-three weeks (hopefully)! :)

Srsly.
I've said it before, and I say it again:
Lose the filthy white borders. Everything else looks fine.

Sorry Theon, gonna have to agree to disagree on this one.

I tried a pass with the border effect off (no white edge or shadow) and it just ended up looking like any other retro-style game....not that there's anything wrong with that, but I might as well try doing something somewhat unique.

Plus I personally like the way it looks :) To each their own.

I like the white edges. Cow Trouble is a another good example of a game that did it beautifully. Cosmindandblue.com

Wiimedia.gamespy.com Yeah, i was going for a 16bit Paper Mario -esque feel. I know they didn't necessarily have white outlines on all characters, but I like the times they did.