This June I held a presentation at the Forward Festival in Zurich about worldbuilding and Storytelling in VR. I used the dwarven Stonebeard family from our fantasy universe, to explain our approach of the 4WH's. This entry summarizes one of the techniques we use when building worlds and stories.

A few months ago, I was asked by the SGDA (Swiss Game Developers Association) to give a talk at the Forward Festival in Zurich, together with Stéphane Intissar, CEO of OZWE Games. The topic: Storytelling in VR. Timeframe: 10min max, each.

I was challenged to pack over 9 years of ongoing development into a 10 minute talk. I had to take a deep breath, as so much information raced through my head that it seemed an almost impossible to condense all those details into such a short timeframe. So, I decided to present a cross-section of our worldbuilding, using our Stonebeards as a template. 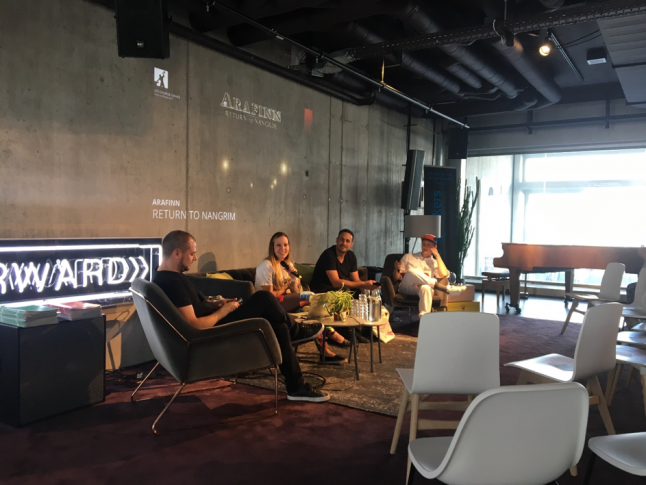 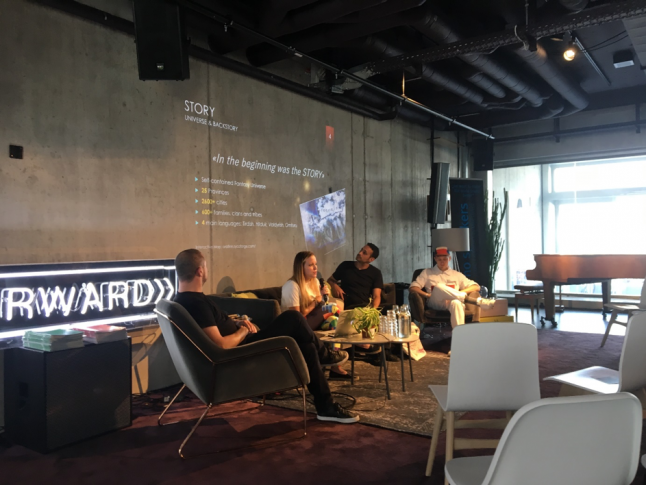 Giving that talk was a very interesting experience, so I decided to write this blog entry to share some of the things I spoke about. So, here’s a wrap-up of the lessons we’ve learned and the worldbuilding approach we’ve developed over the past 9 years. I hope you enjoy it!

In the beginning was the story… 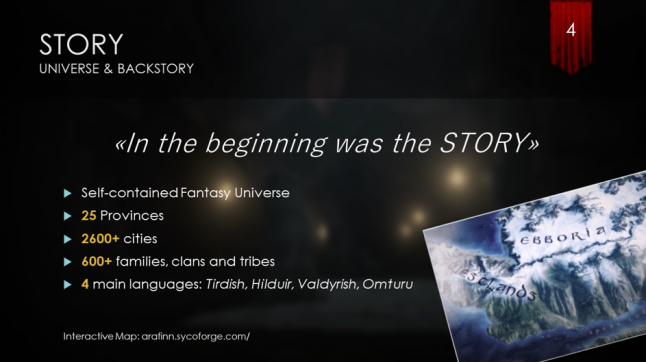 Before even thinking about making an actual game, we started with the creation of our universe. To get to those 600+ families, clans and tribes mentioned in the slide above, we had to brainstorm, sit together, argue together and discuss A LOT. We spent almost every night during our time at university creating the Lore of Arafinn. Beginning with names and a world map, with time we created a huge compendium to describe each and every aspect of the Lands of Arafinn. We had a clear vision in mind: creating a self-contained fantasy universe. To us that means every fact, event, happening etc. must make sense and our universe must follow a logical structure based on rules that we define. In order to achieve this goal, we knew that we could not just start developing a game or write a book from scratch but first had to let our universe grow. 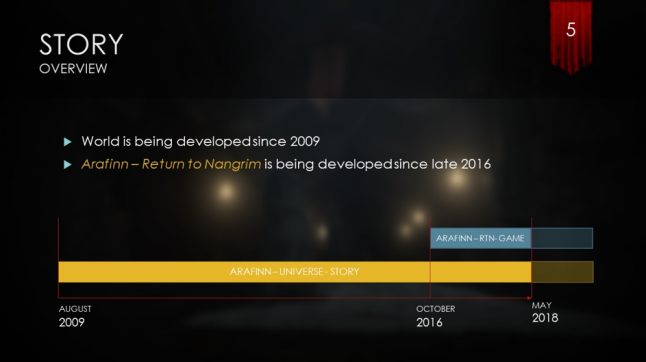 By the time we began with the development for Return to Nangrim, 7 years had already passed. One thing that evolved throughout those 7 years was the culture of the Stonebeards, the most powerful dwarven family of Arafinn. The rest of this blog entry will focus on the development of this specific culture but can be seen as a template to be adapted to fit any aspect around which you’d like to build a self-contained world. 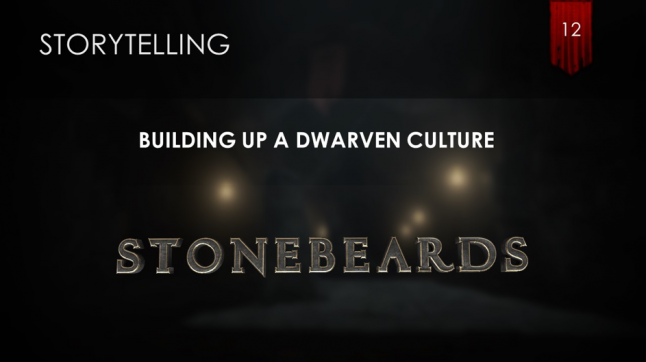 What you need before you begin: 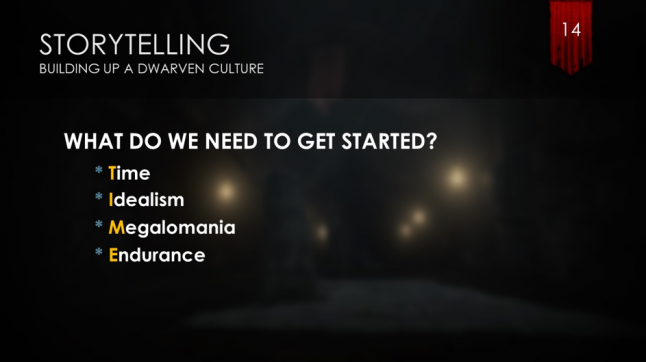 Together this forms TIME, which really is the key – take your time! Rome wasn’t built in a day, and nor will your universe be.

The principles of the 4WH 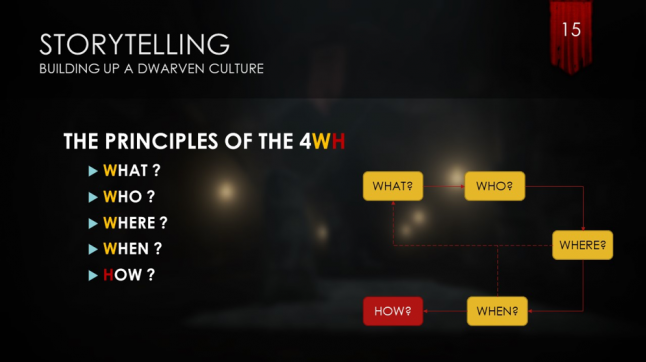 When we create a family, house or clan, we ask ourselves the 4WH’s:

What, Who, Where, When and How?

As you can see in the slide above, the questions are not necessarily consecutive, and may be fed back for multiple iterations. This makes sense, as often, for example, you may need to ask yourselves what questions during working on the where part. For example, asking yourself: “Where do the Stonebeards live?” automatically implies questions like: “What is the weather like where they live?” etc. (but more on that later).

Going through those questions in detail and doing multiple iterations gives your story structure, context and depth.

Now, let’s begin with the first question: WHAT?

A very basic example for a what question in the context of the world of Arafinn could be: “What are the Stonebeards?” (We will stay with the Stonebeards for the rest of the questions to keep a red thread)

In turn, the answer should be as simple as the question: the Stonebeards are a dwarven family that are famous craftsmen and engineers. 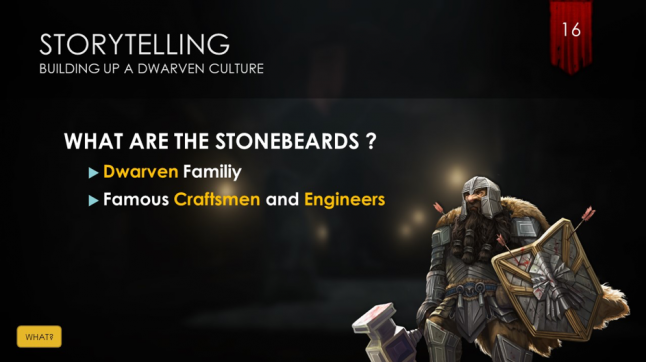 Using this information as a foundation, we continue asking further questions, such as:

what language do the Stonebeards speak? 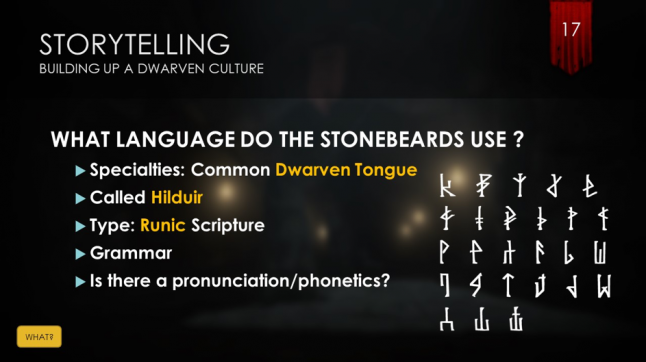 In our case, this question is far from trivial. As we aim to create a fully immersive universe, we decided to develop languages that are speakable and writable. For this reason, we teamed up with a language scientist who is helping us to develop grammar and phonetics for the 4main languages spoken in Arafinn.

But even if you’re not planning on developing your own language to this level of detail, you can still ask yourself questions about language within your world. Questions like “What is the language called?”

(in our case of the Stonebeards it’s Hilduir, the language of the mountains) and

“Who is actually speaking this language?”

(Hilduir is a common dwarven tongue) help create context and bring your characters to life.

Probably the most complex questions to answer in detail are the who questions. In the case of families, clans etc. I like to begin from a broader perspective and work my way down to individuals.

In our case, the first who question to ask is simply: 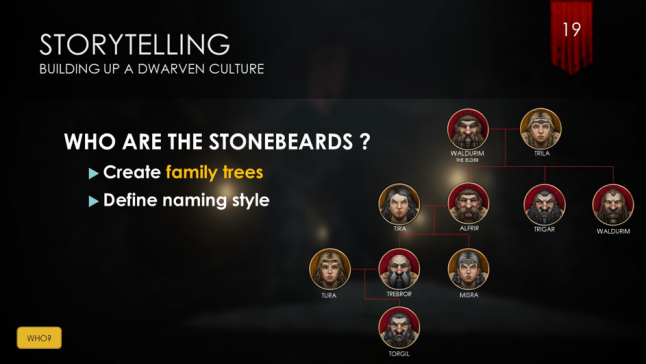 As we already know what the Stonebeards are (the Stonebeards are a dwarven family that are famous craftsmen and engineers), now it’s time to flesh them out. To do so, a helpful tool is the family tree! They help you keep track of your protagonists and create order and context.

When talking about family trees, naming conventions also come into play; ask yourself:

“Who is named after whom?” 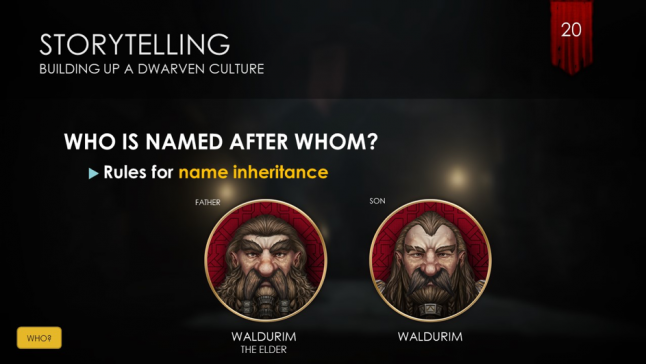 Imagine a case where you have a son who is named after his father. How are these two distinguished? In our case, we chose to add the suffix “the Elder” to the father’s name. So, our father, Waldurim, is now “Waldurim the Elder” and his son is just “Waldurim”. You can also consider naming convention for royal inheritance. For example, the son of a reigning King (actually the prince) has the suffix “Stintrag” which means “Stone Carrier” in Hilduir.

After we covered the very basics of our family, we moved a step outside and asked:

“Where do the Stonebeards live?” 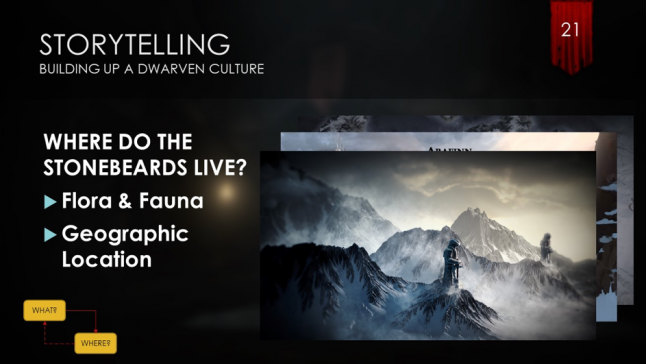 This question comes at quite a late stage as this is one of the more complex ones and often leads back to several what iterations. The idea behind this question is to analyze and define in detail the environment your characters are living in. What is the flora and fauna? What’s the geographic location? You see, you probably will need some more of these whats ;)

After you’ve answered the where, now comes the how:

“How do the Stonebeards live?”

Describe their environment in as much detail as possible – what they eat, where they sleep etc. Create some concepts to get a feeling for their culture and to manifest your inner picture! 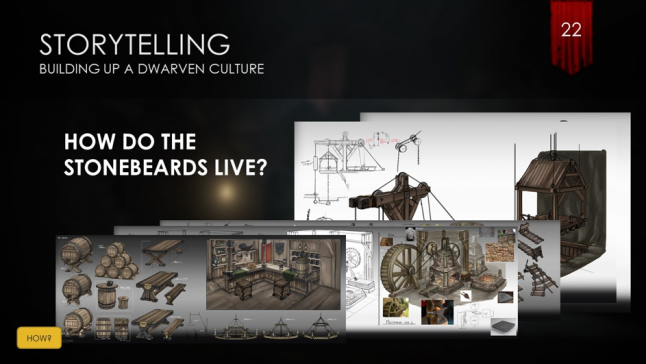 If you followed these steps and did some iterations, you probably have a quite solid characterization to work with. But why is this so important? And what does this all have to do with VR?

Well, as well as the user being less forgiving of wrong dimension and proportions in VR, this is also the case for conceptual issues. 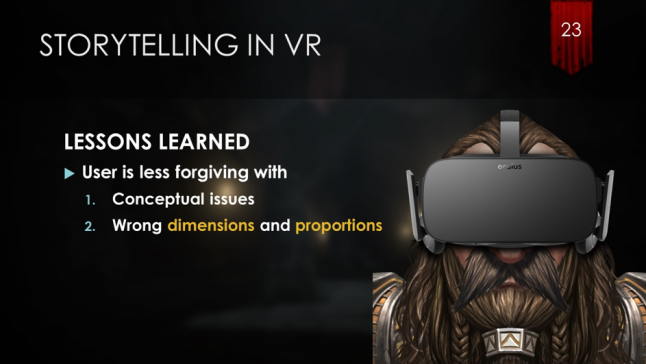 As VR is such an immersive medium, players get dragged into the world of the game, and as they can observe this world hands-on, this also means that they can observe every mistake you made in terms of logic, consistency and/or coherency from totally different angles than when playing “normally” on a flat screen. A lot of techniques that work perfectly well in regular games don’t work so well in VR.

Try to create a 3D image of the world you imagined in VR and try to be as realistic as possible. Rely on natural guidance to point the player in the right direction, instead of using intrusive elements. Want them to pick something up? Let a crack in the wall shed some light on the item in an otherwise dark room (but don’t overdo it! It should not look like the item has a halo, unless you want it to look like that - then just go ahead!) 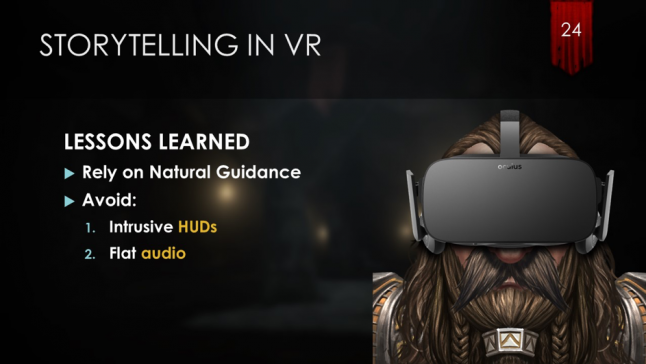 I hope this short summary gives you a handy toolkit for your worldbuilding and its application in VR. As always, if you have any questions, feel free to get in touch!