In this devlog: The third characters is now under construction.

𝕺ur next character is now in development.

After the release of the demo back in October, there hasn't been much development done as I was supposed to find ways to promote the game. During that time I got tangled with real life as I am currently searching for a new place to live. This has been on mind for a while so the development of Child Arms is slow for the time being. I hope that once I move into a new place, I can go back to updating the game and figuring out how to promote it more effectively. Just wanted to announce that quickly so with that out of the way, let's proceed with the devlog.

We're finally working on the next character, Gunshi, a samurai who wields two swords. I won't go into detail about him here as I want to make a special feature for not just him but all the characters, but I will mention his unique aspect: with Gunshi, you can switch between both swords. Each sword has its own specific attributes so there will be a noticeable difference when switching between weapons. I'm certain that Gunshi will be a complex character to use. 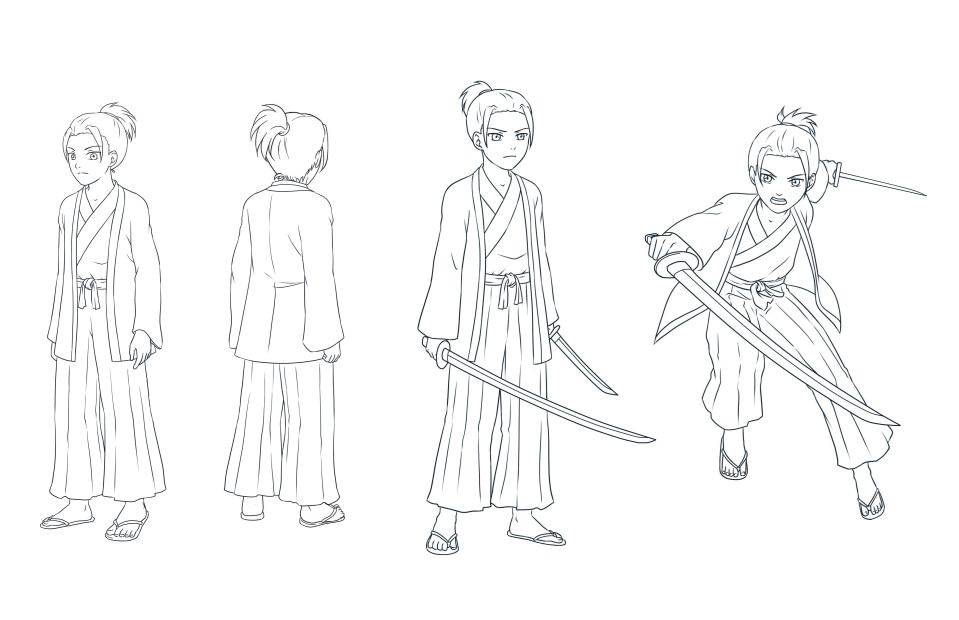 Some concept artwork for Gunshi.

Right now the rough drafts for all the sprites are being made by my artist. Each one has to be checked to make sure the moves are animated correctly before they proceed to draw the finalized design, as explained in [https://www.indiedb.com/games/child-arms/news/devlog-5-4-2020]. As explained, the way the artist work on the sprites are in batches. A set of sprites are chosen at a time, mainly a set for a single animation, to be worked on. For Gunshi, there are 20 batches so it's estimated that all this is going to take 2 months to make.

Thankfully this does not apply to the code. In fact, I'm practically finished with Gunshi's coding thanks to the way the game was been designed. When Enro's character object was being coded, it was being done in a way that he would serve as a template for the rest of the cast. For Gunshi and every other character after Enro, all I got to do is copy Enro's code and alter it so it fits Gunshi's attributes. By using a template it streamlines the development process so I'm not spending needless time on every single character.

Roughs for the sprites.

Let me finish off by saying that things are going to be slow because of the aforementioned apartment search but I'm hoping that once I find a new place, production and promotion of the game will not only continue but be much more effective. Moving to a new place will surely help me be more productive to make a better game than before.

Make sure to also follow the progress of the game on social media. And come join us at the Discord server where even more updates will be made on a constant basis.

And wishlist the game on Steam: