Releasing a game is just a milestone, not the end of the race - work always needs to be done to keep improving it, adding in new content, and making sure that everyone continues to enjoy themselves. Questions about the weapon abilities are quite common, so we decided that it would be a good idea to put together a written dev blog going over this. 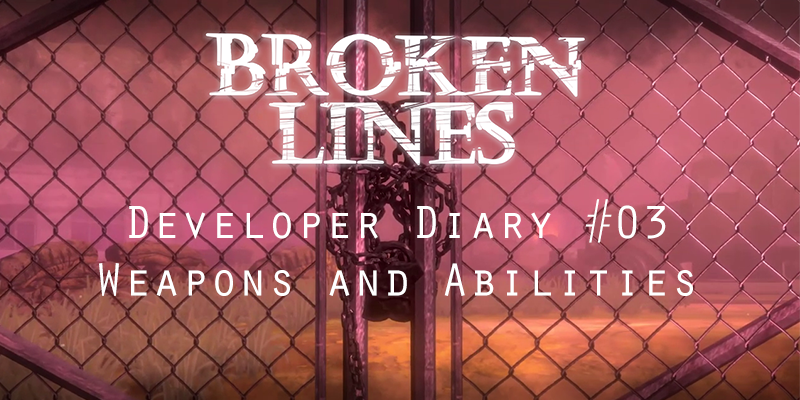 Releasing a game is just a milestone, not the end of the race - work always needs to be done to keep improving it, adding in new content, and making sure that everyone continues to enjoy themselves.

Questions about the weapon abilities are quite common, so we decided that it would be a good idea to put together a written dev blog going over this.

So, without further ado, let’s dive into it!

Before we begin, we need to look at the types of weapons in the game. We have the long-distance rifle, the rapid-fire SMG, and the close-ranged Shotgun.

Each of these weapons has a normal autofire mode, and also a special ability that you will have to manually activate.

First, we have the rifle. This weapon has the slowest rate of fire, a moderate to high damage per shot, and is most effective at long ranges. Let’s look at the full stats of the Gewehr43. 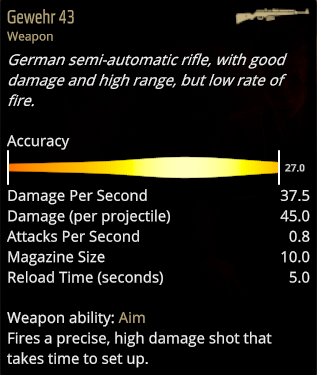 To understand the accuracy bar:

You can command your rifle soldiers to take Aimed shots. This ability tells the soldier to ‘line up’ a shot, granting it extra accuracy and damage. However, this shot will take a few seconds to prepare. This ability is very useful when you need to chip away at enemies who are hiding far away and are behind cover.

Special Tip
Once a soldier is below half health, they will panic much faster and have reduced accuracy - use this information well!

Next up is the submachine gun (SMG). This weapon is most effective at short to medium range and has the best rate of fire, however, this is balanced by the fact that it is not that accurate. 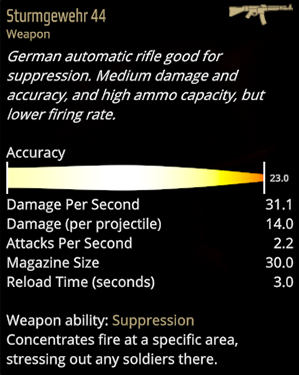 All SMGs come with a special ability called Suppression, this ability tells the soldier to lay down suppressive fire in a general direction - but not at a particular target. This is used to scare the enemy soldiers, stress them out, and ultimately induce panic attacks, incapacitating them for a while as they search for cover.

Being shot at can affect both health and stress. This is because, even if you are not getting hit, being shot at is a nasty experience. If shots pass near a soldier their stress bar will go up. The more shots, the more stressed the soldier will become.

When the stress bar is full, the soldier will panic for a short period of time. During which, the player will not be able to control them. The soldier will not shoot, but instead will head for the nearest available cover and hide.

Finally, we have the Shotgun. This weapon is designed for close-quarter combat, and deals high damage - but - as you may guess, is only good at close range. 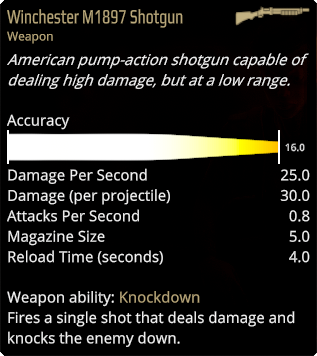 The shotgun’s ability is all about toppling the target, making them fall down. When activated, the soldier will charge towards the targeted enemy and fire a high powered blast that knocks them down, preventing them from firing at anyone until they get up (if they survive).

However, charging at an enemy is dangerous, so you will need to provide additional cover for the shotgun-wielding soldier. Therefore, it is best used in combination with the SMGs suppressing fire ability. The SMG soldier would suppress the enemy, while the shotgun soldier would flank the enemy and finish them off!

Tip: This ability is great for quickly interrupting a nasty boss who may be about to use a heavy weapon or toss a grenade at you.

And that's it for this developer diary, we hope that by reading through it you've been able to learn more about the weapon abilities.

Broken Lines is has been released and is available on PC Windows, Linux, and macOS. You can buy the game on Steam and on GOG.