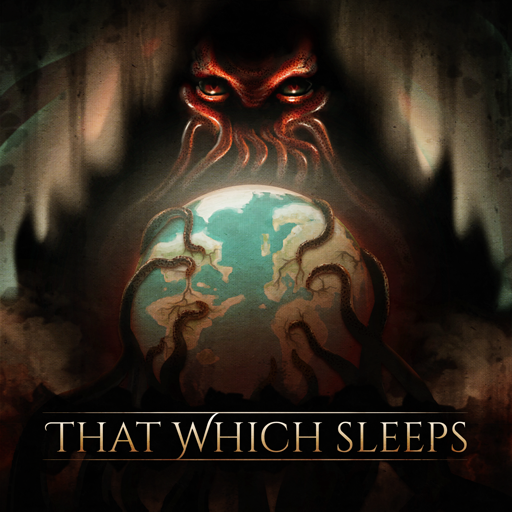 That Which Sleeps is a turn based strategy game in which the player takes on the role of an awakened evil from the world's past and must manipulate a living, reactive world from the shadows using a cast of unique corrupted Agents. The player must balance an aggressive approach utilizing his considerable power and eager hordes with the need to remain unknown to the Champions and Heroes of the world. You must be sure that when your name is again spoken by mortal tongues that it is spoken in dread, for it is too late to stop That Which Sleeps.

We've had a lot of progress with our assets and I think it's high time we started showing them off. Let's jump right into it. 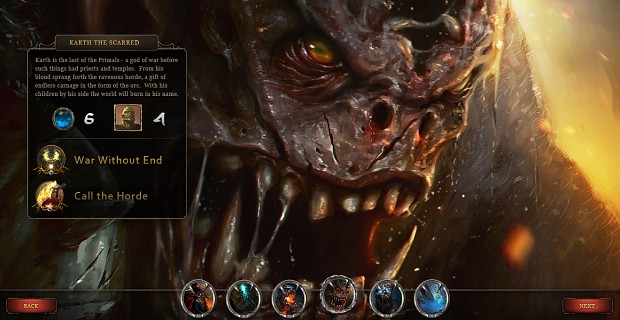 Behold Karth - the First Primal - one of our Eight Ancients who are set to torment the world. He seems angry doesn't he? Each of the Old Ones was illustrated by the VERY talented Richard Luong who worked on Cthulhu Wars and we're very happy with the results. We changed the layout to let the art speak for itself, but all the information is still completely supported by tooltips. 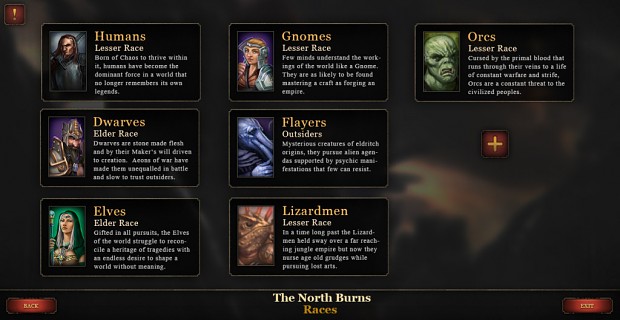 From our In-Game Editor, you can see the races of the world and that compellingly placed plus sign that just demands a creative addition. Modding in That Which Sleeps is incredibly easy. You'll see three "types" of Race here: Elder Races, Lesser Races, and Outsiders - two more types are planned for later releases. 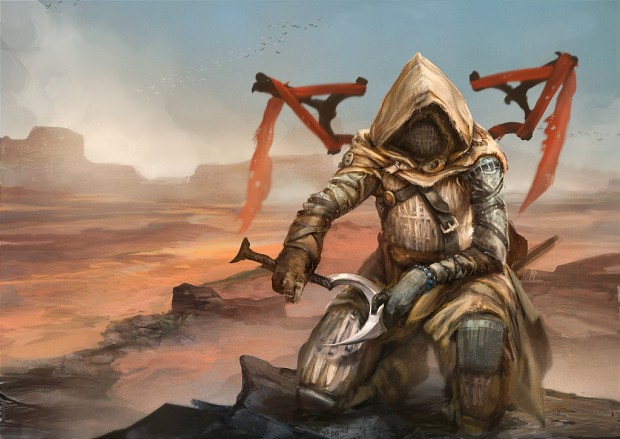 Most of our Agents have received an overhaul - the Prophet here has searched for you his entire life. He will be your most loyal follower and will fall on his sword (or whatever that curved thing is) at your command. 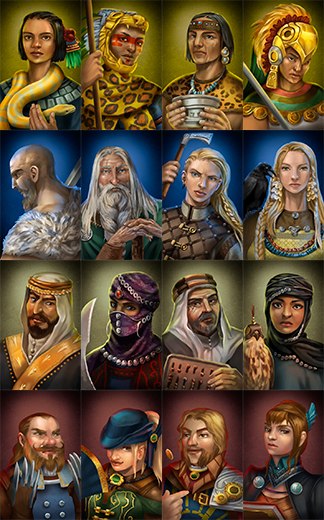 Some of our more exotic human cultures and the newly added Gnomes at the bottom - we plan to have over 200 unique portraits for the game so that you can keep track of the heroes working against you. 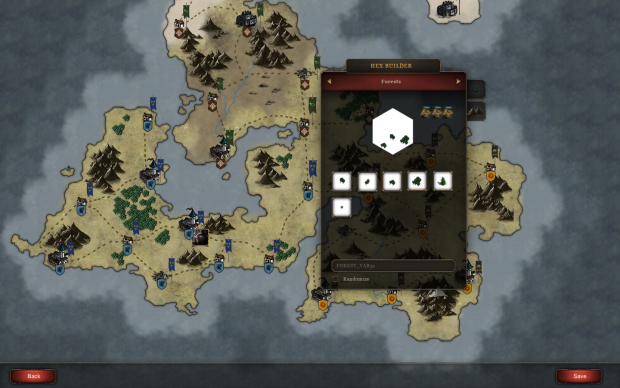 In-Game Hex Builder letting you create variants for features and geography - not only can you make a single sample but you can set the individuals trees to vary themselves by terrain and biome. You can also swap out the individual sprites and the composite hex will reflect the changes.

Hope you like what you're seeing - the game has come a LONG way but we still have some distance to cover. We're aiming for an April Beta with the full release later this year.

We release our fifth dev log showing off the Map Builder which is available to all our Kickstarter beta backers.

We have been Greenlit while only being on Greenlight for less than 3 weeks, a truly validating accomplishment. We also posted Dev Log 4 part 1 of 3, and...

Kickstarter has gone better than we could have imagined, and our Greenlight campaign is off to a good start as well. Take a peak at our latest backer...

We are up on Kickstarter and Greenlight, if you feel like That Which Sleeps is the kinda of game you want to play please support us!

Interesting game based on good idea.
- Does scenarios has some story (the same set of events)?
- You said that "The Old Ones do have their own events". Are these events randomized or influenced by your gameplay or the same for every game?
- If the game is about intrigue and influence does it mean that your agents could be befooled by heroes or agents of competing Old Ones in order to give you bad info? It would be probably too tricky...

Thanks for any info and have a nice day

- Scenarios have a consistent starting point and contain thematic events that can emerge given certain circumstances but we do not force a certain progression.

- The events contain dynamic elements that are either driven by your choice or the state of the world.

- We originally had uncertainty with your agents but decided it just added an unnecessary level of confusion to the game, any information you receive is categorically true while any uncertainty is represented by the absence of knowledge.

Holy hell... I never dared to imagine that one day I'll be enabled to play a role of Cthulhu! :D

First of all: I think you have a real gem here. The concept looks wonderful and I can't wait playing your game.

Second: in your devlog you explained somewhere why you moved away from procedural generation, but with a stretch goal on kickstarter you reimplement it.
Can you maybe explain us a little why you have reconsidered that, and how will you implement such a great feature?
Thanks!

We were heavily involved with the community in the run-up to the Kickstarter and the community was heavily in favor of implementing a procedural solution. While we still favor the hand-crafted scenarios we came up with a solution that strengthens the simulation aspect of the game enough significantly that we decided it would make a strong stretch goal.

Take a look at our backer update for more information on our implementation: Kickstarter.com.

This is looking really neat and I've tossed some money at it already. Procedural Generation means I don't have to rely on other hunam to make things for me to have more games (Plus there seems to be lots of individualized options for Great Old Ones but even if they're not individualized choosing different options will probably change some gameplay elements in the scenario in different ways for different GOOs).

I saw you say it was easy to make a GOO; how easy is easy? What I'm basically asking is how fast can I, as a peon who has only minimal skill in programming, make a horde of Touhou GOOs using other people's artwork? X3 Like, are you going to include a bunch of spare skill trees and not use them? Or are you planning for custom GOO skills to be relatively easy to make?

We don't have spare skill trees but we have is an abundance of "effects" that are otherwise not used. So if you wanted to make an ability that gives a POI -5% population a turn for 3 turns that effect is in the game with a customizable duration and amount.

As for how long, the first Old One would probably take you an hour just because learning how the system works can be a little complicated, though we it will be made easier than it currently is in the actual release. You could spend hours customizing the flavor text, spawning special events and such to really flesh it out - but if you wanted to just run through and make Old Ones with some custom abilities you can make one in about ten minutes once you know how the editor works.

Generally if you're just looking at simple mechanics, it's very simple to do but if you want ta more immersive and thematic experience you can expect to spend a lot more time.

GOOs have their own special events besides wozzername going 'no you do this now' with his prescience? I... shouldn't be surprised. Do custom GOOs include a section for the custom Prophet scheme, or is that another bit of stuff to work with? Why am I asking ease of use questions at this point, that's dumb.

I have a friend asking a question I'm pretty sure the answer is 'lulnope' to, but did "Rival Great Ones" include multiplayer? Also did I misread or is Beta in december?

The Old Ones do have their own events, some a lot and others just a few ranging from thematic to very mechanically important.

The custom Prophet element is handled solely through events, unfortunate there is no custom component specifically for Old One/Chosen One interactions.

Expectation for beta was two months after the end of KS, which puts us at the end of December - but we are thinking we may set it for January instead given how many stretch goals we hit. Even though we are tackling these after the fact we NEED to secure the proper art assets for Procedural Generation prior to securing any other assets (because they must remain consistent with the map aesthetic) and this may or may not take us out of the development cycle for awhile.

However, Beta testers will be involved in asset selection starting very soon after the KS ends.

Indie
Twitter
Tags
Embed Buttons
Link to That Which Sleeps by selecting a button and using the embed code provided more...