WargameProject is a Turn Based Strategy with its own fantasy universe. It can be played Single player (Campaign) or network Multiplayer (Battle Server). There are 3 playing sides in the game - Men, Dwarves and Dark. Each has unique gameplay feel and mechanics. The key features are rich unit model and sophisticated weapon system.

In this release we enhance multiplayer balance and add more tactical and diplomatic options for players. Read on. 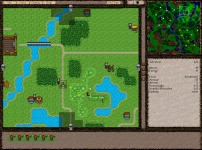 Download this release here at IndieDB or from our site at WargameProject.com.

WargameProject v0.8.36.943 is out! In this release we add more diversity and tactical options for players.

WargameProject v0.8.36.936 is out. We have reached several huge milestones in our development and we think it is worth sharing with you.

This is a build with some experimental features. Neutral castles now can be bought. Ancient tombs now have multiple levels of toughness and several heroes...

In this release we switched to new compiler (MSVC 2013). Added new graphics for razed map objects. Changed behavior of some map objects to be razable...

This release comes with a lot of bug fixes and interesting balance changes. But more importantly, this release features initial implementation of our...

Lots of gameplay changes in this release. Hill terrain cost reduced from 6/6 to 5/5 (it should greatly benefit players that command armies of Men). Castles...

Lovely art work, especially all of the line art. There were only two playable ladies though. Cursor seemed to lag behind the mouses movements. The Gameplay was rather good even in early build. I went into it expecting the art to be alot less bright and cheerful, but I liked it, it was pretty. Music was rather catchy. I started to notice that there are not really many ambient sounds going on though. This game does have a lot of potential though, Imma start tracking it.

Kinda reminds me of Warlords. Was that game a source of inspiration?

Exactly. It was mostly influenced and inspired by Warlords.

Is there any chance that this game will come out on mac or linux? It looks very fun but unfortunately i own a mac instead of a PC.

Yes, there is a chance. It's just a matter of priorities that we set for ourselves. Some time ago we had a linux and mac development builds. But it was a burden to maintain these versions (given that our game is not that popular and we ourselves are Windows users). So, for the time being, we decided to concentrate our efforts on Windows platform.
Thank your for your kind review!

Really, really fun. I generally don't like turn-based games, but this is beautiful.

definetley checking and tracking this one.

Most interesting, i shall try it out and give you feed back!