Here is a list of some features that are available in CoE 3. 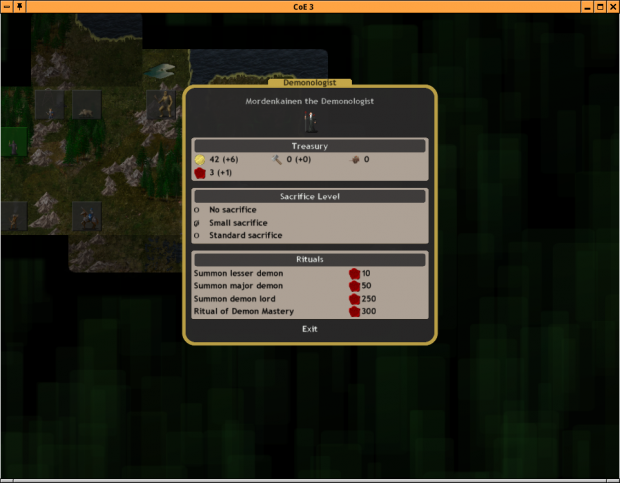 News screen that shows changes between versions.
New independent monsters.
Cost of send greater horror reduced 50 -> 40.
Performance improvements.
Event messages written to debug log as well.
Get to choose between load/random even after canceling out of a loaded map.
Fungus growth event was not saved, fixed.

If the first player was not present when starting a network game the second player would get a blank world to look at, fixed.
Faster disconnects from network server.
Confirmation for turning player into AI in network game.

Version 3.17 of Conquest of Elysium brings more keyboard shortcuts to the game as well as performance improvements and some cosmetic fixes. It also brings...

Don't let the cold get you down this winter! Play indies in this bundle: Greed Corp, Hamlet, BIT.TRIP RUNNER, Conquest of Elysium 3 and more!

This update brings changes to the trading system, improved performance, improvements to the Voice of El and a more disconnection friendly network game.

CoE3 progress page on Illwinter site shows 3.19 version at October 30 2013. How fast could it be updated on Desura?

Well, I just redownloaded and reinstalled it ('cause I had Gamersgate version and bought the second version of CoE and Dom3 to have all the Trinity in one place:)). On the main menu screen is still 3.18.

The version number was not updated in the windows version. But if the news page says 3.19 then it is 3.19 anyway.

I love this game, it is a really great pure strategy experience where your decisions at the highest level play out in automated tactical battles. The game seems a little intimidating at first, but once you realize all you need to do is recruit units and move them around it becomes much faster to play. There is a huge amount of variety in how the 18 different classes conduct warfare as well, giving the game hours and hours of replay value even if you don't engage in multiplayer. I especially love how the Necromancers were implemented, going insane by raising the dead until they defile their mortal bodies and become Liches, or Vampires that eat villages to restore their sanity. Raising legions of the dead at ancient battlefields is an AWESOME touch. Driving your apprentice insane in the early game helps convey how evil you are without a single line of dialogue. Every faction is thematically developed like this, and it creates an atmosphere filled with clashing grand concepts from dark mythology and gritty fantasy. The only way the game could be any more epic is if you were playing Dominions ;)

Wait until you start allying with the AI. It does a pretty good job of it (well no more irritating than the average human player). And it is a lot of fun to discover how you are able to use each others abilities. Such as a Necromancer following around his Baron ally to raise the dead after the battles (even in cities the Baron owns). Or how well the Troll King allies with Dwarf Queen since they do not want each others resources.

Dwarf class is really, REALLY annoying to play as because of UI limitations. There should be a way to see existing units in a city while doing recruitment (as any class), even if it was just a list to one side of the screen that you could scroll, sort of like the F1 menu. Because cities / mines don't have unique names and can be located very close together it is a chore micromanaging the hiring of units every 5 turns or so. Alternatively, being able to name the recruitment points manually would work, or even just auto number them in the order that you capture them. The whole "ordered by proximity to the origin of the map" thing is terrible because as soon as you begin capturing new locations it re-orders your list, again making it more difficult to figure out which city you're actually recruiting in. If there are mods that address any of this please let me know!

It's all about the Druid class; that is, if you start with that one particular class (which is a pretty easy one to excel at) then you will find the features of the game to become greatly more familiar. After that, you can challenge yourself with more case sensitive classes, such as the senator or enchanter.

This game really needs a tutorial...

Print out the manual; it'll tell you a lot about playing the game that isn't obvious if you learn-while-playing.

Buy this. It has things in it.

Conquest of Elysium 4 Turn Based Strategy