Hi! I'm Dirkson. I'm trying to make one of the most accurate space combat simulation games. Ever.

For some reason this includes a lot more space cows and butter than I thought it would.

Want to try it out?

So image updates have been sparse since the last livestream. Why? I've been rearranging some of the ScrumbleShip backend. Let's dig into that a little. 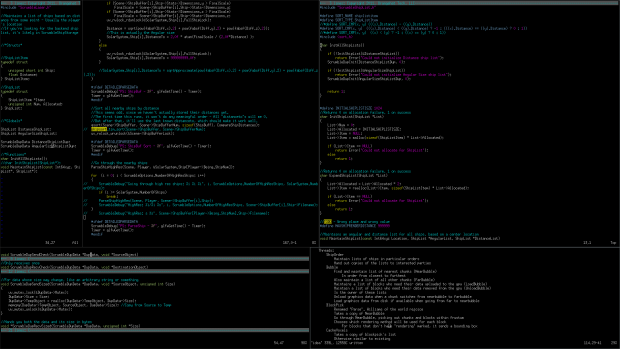 Currently, the way rendering works is something like this:

There's a lot of weird behavior too, like backwards sharing of ordered ship-lists, which causes threads to wait for each other.

The biggest problem with this system is that it requires me to re-send ALL the voxel data EVERY frame. As the ScrumbleShip engine gets better at rendering voxels, I can both send more voxels to the gpu, and send more data about those voxels to the gpu. So I'm starting to use too much bandwidth between the computer's memory and its graphics card. For example, the extra data sent by the lighting change needlessly costs us around 10fps.

So reducing the number of sends is a high priority on my list. But as I was studying to fix the problem, I noticed several interesting facts about the current rendering pipeline, and I developed a plan to make it better. Here's an experiment I did to prove a particular point: 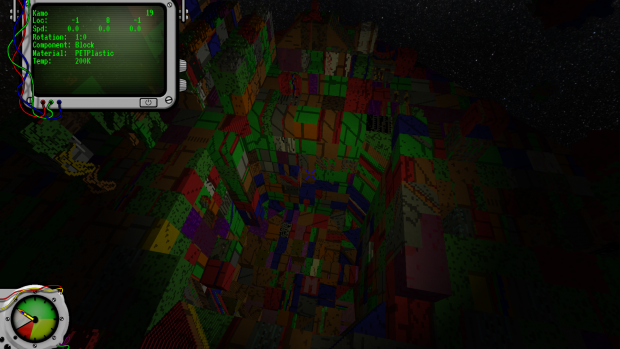 This proved to me that I COULD render efficiently using multiple opengl draw calls, which opens up a lot of interesting optimizations.

So the new plan is:

What advantages does the newer pipeline have?

At this point, I estimate I've got maybe another week left to switch to the new pipeline. Then I should start putting out cool videos like this one again:

I can't work out how to embed a video here, so here's a link!

I'm aiming for the next full release sometime in February. It'll contain the lighting changes, lots of performance improvements, the mining torch, a complete UI overhaul, and a building-system overhaul.

Asteroids are awesome, contain valuable minerals, and will butter your toast for you.

Just another dead game? No, not quite. ScrumbleShip releases its biggest update ever. Also the dev talks about feelings and stuff, but then gets right...

This past week has included a few fun new additions for ScrumbleShip.

Shaders so sharp you'll cut yourself

We increased the number of polygons on screen by a factor of 10. Here's how.

I really should buy this.... Been watching it for a while.

Is this game still in development?
Such a long time without news.

Just wrote an article about that, actually. It should be on the main ScrumbleShip page. Long story short: I've had some serious setbacks, but have restarted work and am making solid progress again.

This looks like a great game. Albeit a couple years old.

this game looks awesome, and i was wondering, will there be shields with higher and lower capacity and will there be any projectile weapons?

Hey - I'm not the dev, but he has long discussed various projectile weapons like railguns, gauss coil guns, regular gunpowder guns, and various missiles/rockets. Those should be pretty awesome in effect once the physics engine is fully implemented! The voxel damage engine already works, and you can imagine how chewed up ships will get by projectile weapons.

Right now there's only a prototype laser that - depending on its power setting - gradually heats and melts blocks at low levels, or instantly vaporizes voxels at high levels. In future, energy weapons will draw from the ships' power grids, so projectile weapons will have the advantage of not producing as much waste heat and hogging power. Although railguns and gauss guns will draw power of course, and their power levels will also be adjustable to vary the velocity.

Thanks for this awesome graphic update!

The parts of this game that are already in place are awesomely fun, and once the rest of it is in place, there will be nothing like it anywhere. 10/10 for concept and fun.