Project SolarBot is a 2D action shooter with huge exploring elements! You are visiting planet Ers as a SolarBot. You can move freely in an open environment, but keep in mind that you have to take care of your energy level! Stay in the sun in order to prevent sudden shutdowns! Find rare materials and technology in order to save your homeworld and improve your equipment and your A.I. Wait... Maybe you don't even want to safe your homeworld? 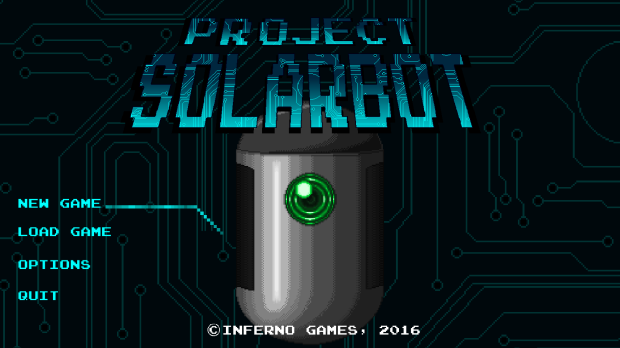 In Project SolarBot you take control of a robot. Your mission is to explore a planet named Ers. But always keep an eye on your solar meter. As soon as you're down to 0 points, SolarBot will drop like a fly.

Fear not! You can recharge your little toy by placing him in the sun. Well, this could be a problem in caves and facilities... Meh, you'll figure something out!

As mentioned before, you're wandering on a planet searching for materials and rare technology. During your mission you'll get better equipment and the old technology will teach SolarBot how to work more efficiently.

Exploring is the most important thing in this game. Make sure that you've checked every stone before proceeding!

Improve the SolarBot by discovering secrets!

As time goes by, SolarBot will be receiving upgrades and new weapons. With those new upgrades you will be able to interact with your surroundings. An example:

This magnetic field prevents you from jumping high enough to get the Solar Tank on the rock. What could you do to reach it?

Correct! Use the Magnetic Beam to switch the poles of the field. Now you'll get a huge jump boost and you'll be able to reach the Solar Tank!

One of my favourite things in video games is exploring the world you are playing in. So I decided to implement this feature in Project SolarBot too! With your scan visor you can scan things like enemies and technological stuff. Check it out!

By using your scan visor on certain things, you can discover even more secrets and details of planet Ers.

If you scanned an object, be sure to check out the database in the main menu. It will reveal weaknesses and you can learn stuff about the creature you're about to destroy too.

Ten years ago, a group of scientists found out, that the current supply of ressources will only last for about 12 years. Now, that we almost reached this deadline, the governments of your homeworld initiated a big project. Project SolarBot!

Only the smartest under the smart ones were allowed to work on this project. The mission: Send a robot to the nearest, once inhabited planet in our galaxy in order to extract and discover ressources and - if there is any left - technology.

After they finished their work, SolarBot was born! Equipped with a beam weapon, a scan visor and lots of solar panels, the little robot starts his journey. What kind of adventure awaits you? Will you be able to save your homeworld? Do you even want to save it?

The scientists had to admit that the A.I. could have been better, but who says that A.I. can't grow with its tasks? 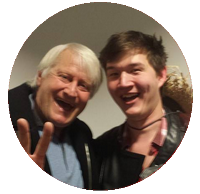 Before you ask: No, Charles Martinet is not working on this game too. I just thought this is one of the coolest pics I have. And damn, it would be so funny if SolarBot would actually be voiced by Super Mario!

Besides that: Yeah, I am pretty much working alone on this project. Scripting, storyboard, graphics etc. It's pretty hard but I wouldn't exchange that job for anything else in the world!

Thanks for voting and helping Project SolarBot [Metroidvania] on it's quest to become the 2021 Indie of the Year. You are now in with a chance to score some free games. Help this game secure more votes by embedding the widget (or link) we have included below on your favorite sites.

Project SolarBot about to join the Nintendo family?

The N-Zone (biggest Nintendo magazine of Germany) featured Project SolarBot in their latest issue! Here is what it says: 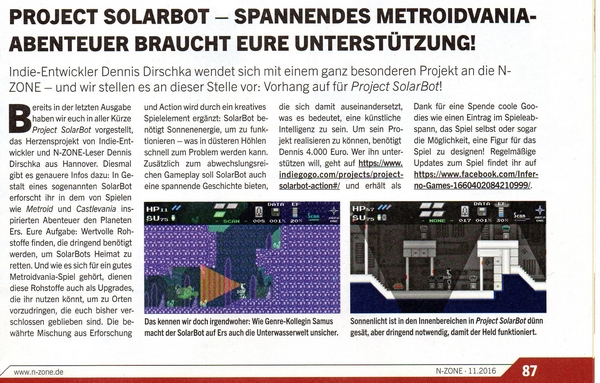 "Project SolarBot - An exciting metroidvania adventure needs your support! Indie developer Dennis Dirschka contacted the N-Zone with a very special project - and now we are presenting it to you: The curtain rises for Project SolarBot!

We already shortly presented Project SolarBot in the last issue of this magazine. It's the heart project of the Indie Dev and N-Zone reader Dennis Dirschka from Hanover. This time, you'll get more details: As a SolarBot you are exploring a planet - inspired by Metroid and Castlevania - called Ers. Your mission: Finding rare ressources and materials which are needed so badly in order to save SolarBots homeworld. And just like in every good Metroidvania game, you can upgrade your SolarBot with those ressources and use them to reach new areas, you couldn't enter before. The well crafted mixture of exploring and action will be added by a creative gameplay element: In order to work properly, SolarBot needs solar energy - which could become a problem in dark caves. Despite a varied gameplay, SolarBot tells an exciting story, in which it'll be explained what being a A.I. really means, too. In order to realize this project, Dennis needs 4,000.00 Euros. Those who want to support him visit Indiegogo.com and recieve cool goodies as an appreciation. Like a credit entry or even the possibilty to design your own character for the game! You'll find frequent updates on Facebook.com."