Mine precious gold from the deformable terrain in order to buy better weapons, digging tools, and deployable defenses. Use these assets to defend your disembodied brain and bankrupt your opponent! 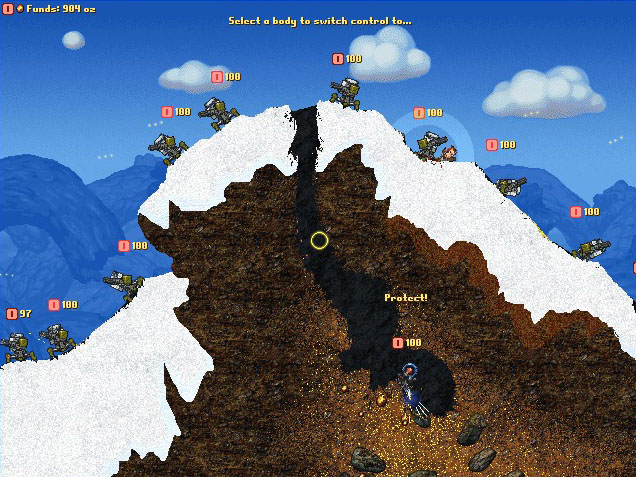 Yup, a fresh build is out, immediately available here, or on the HIB download page for you dear Humble Bundle customers! Mostly fixes and tweaks in this one, but there’s some new fun content too!

Had this version finished for quite a while but we were hoping to get it out completely finished. Although schoolwork got in the way for both me and Psyk

Hi everyone after a longe hardwork i manage to create the 1.0 version for the Los Iluminados mod, its need to create the Novistador for actor, Krauser...

Hey are everyone prepare with green healing herb and with some good ink ribbons for saving? Now you can experience in Resident Evil Style mod :D

My most different mod for now, the Umbrella Corporation comes with a large variety of troops begginning with soldiers, them zombies, hunter and even Mr.X...

Hy guys i this is the complete version i did some tries and errors in the multiple type of magazine weapons but i make it more like the AVP 2 game <3...

Hy guys the original unsc mod it's not mine but i did some expansions on this mod, i hope you're like and if you are a big fan of halo you gonna like...

Met the powerfull faction from halo, the banished, they are expensive, slow tank units yet they have acess of a very powerfull weapons

If anyone's checking this out check out Cortex Command Community Continuation an updated version of the game made by fans after the game was made open source https://www.indiedb.com/games/cortex-command-community-continuation

Can somebody help me I bought this game on steam yesterday and it works fine but when I go into fullscreen the video freezes but the audio keeps going and the courser vanishes and It's really boring to play in windowed mode. If anyone can help me please I don't wan't my 20$ going to waste and I just want to play the game in general :(

could be your video drivers...

Do people who bought the Humble Indie Bundle 2 get a Desura code for Cortex Command along with the one they eventually got for Steam?

1.0 release guys.
I wish this page would keep up with the news. D:

Since the news is a bit slow updating here... Build 27 was released today. Devlog.datarealms.com

Positie thing is that the campaigns now work! A bit negatve, is that friendly fire is now on, so you can't kill your comrades, which is a bummer. :c

Thee's also a random gib bug, featured in the latest developer preview that hasn't been completly firxed yet.

Can't wait for 1.0 though. And the new version is really stable at least =)

I'm really happy that the campaign is now working.

One of the best indie games I've ever played.