The government has won the cyberwar. Their grasp chokes the citizens of every country as oppression rules the world.

Then a group of hackers carved out an untraceable piece of the cyberspace and created the underground network known as Neon Valley. Since then, it has become a place where both the good and the bad coexist as the last of the free. And such places always attract a need for entertainment, thus the Neon Valley colosseum was born.

An online shooter inspired by retrowave and neo-80s. Neon Valley takes an arcade-like route to the shooter genre. With high score leaderboards based on both skill and style. Fast-paced combat akin to Quake and Unreal Tournament. Game modes such as floor is lava, obstacle courses and more. Neon Valley is a place where the best come to attain infamy and carve out their name in the cyberspace. 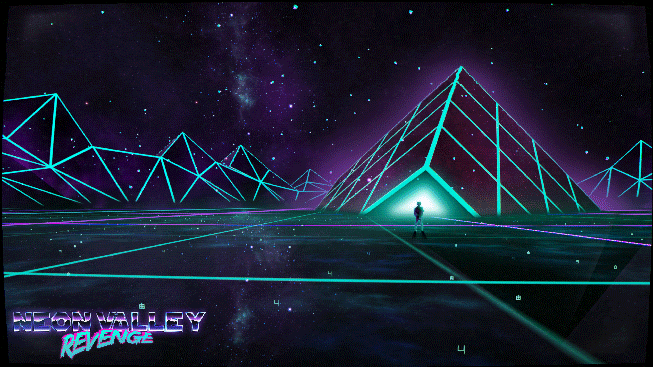 Online multiplayer Accessed through the anonymous battle network, users enter the Colosseum to duel it out in a free-for-all showdown. Style is rewarded highly as well as skills. Your performance is rewarded by anonymous sponsors if you prove to be efficient and graceful in combat.

Health shield system With high damage weapons the users' solace is the shield. Without regenerating health, the shields provide the safety net to survive the onslaught of the Colosseum.

Assortment of weapons and gadgets Ranging from Railguns to Grapple hooks, the in-game workshop provides users with a variety of goods.

Scoring system & Highscore Based on skill and style point and a homage to 80s arcade. Users gain more points with ricochet, gadget assisted kills and more.

Retrowave baby! The playlist to keep you in the zone.

To promote Neon Valley: Revenge and grow its popularity (top games), use the embed code provided on your homepage, blog, forums and elsewhere you desire. Or try our widget.

Demo for the game Neon Valley: Revenge. Offers testing grounds to try out the arsenal and more.

Revenge Of The Cats: Ethernet is a free experimental online multiplayer FPS with unique gameplay: Alternate between the pure energy "ether form" and the...

Wrath Of The Goliaths: Dinosaurs is a hunting game, set in a future where plants have took over the planet and hunters have to go through intense military...

Freedoom is a project to create a complete Doom II-compatible IWAD file which is Free Software' The IWAD file is the file used by Doom which contains...

Nexuiz GPL is a fun and free GPL deathmatch shooter released in 2005. It is a free game: source code is free software and data is free content.

E.T. Armies is an action-packed, fast-paced, science-fiction first person shooter. The game takes place in a dystopian future in which Earth’s resources...