More info can be found here!

Towers are the cold and hard machines standing between the LOEK III colonists and their certain death. They are the first and last barrier between Core Guardians and the scourge of lumniscient aliens in the horizon.

We had tons of ideas for Sanctum 1 that we wanted to add, but never had the time or money to make. That's why we're very excited to show you the Focus Laser and the Amp spire! 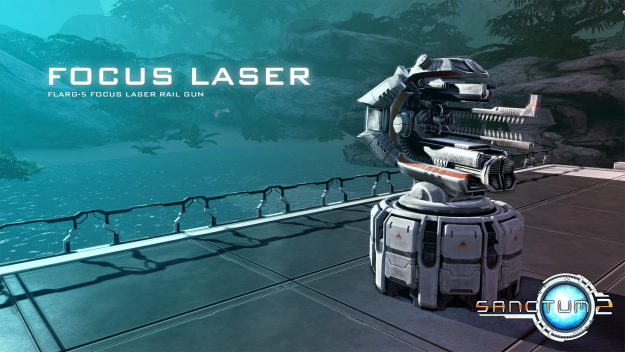 The Focus Laser fires a continous laser capable of punching through the hardest armor. The longer it stays on the same target, the thicker and more powerful its laser becomes. It can easily smash through the hard exoskeletons of the new enemies in Sanctum 2, but is less effective against smaller and faster foes. 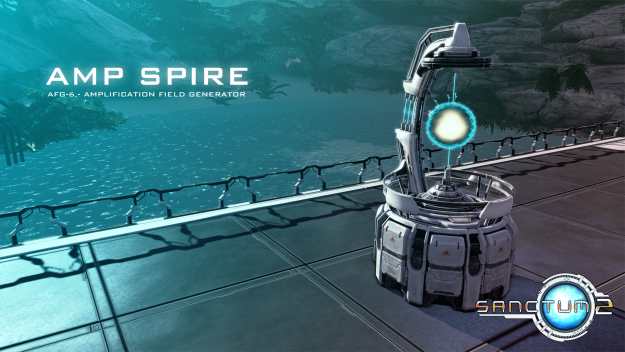 The Amp Spire produces a field around it that increases all damage done by nearby towers. The more it's upgraded, the bigger the damage bonus and range becomes. If you adjust your maze to accomodate Amp Spires at the right places, this tower can be one of your best allies against the horde of Lumes dead set on destroying your Core!

For more info about towers, be sure to check out our blog at Coffeestainstudios.com !

The team has been working hard the latest time on making a Mac port of Sanctum reality. We're now very close to the launch and an open beta is available...

New Free DLC together with Yogscast and the huge 2012 Spring Patch! To spice things up a bunch more, the game is F2P during the weekend & 75% off for...

Holiday season approaches faster than you can say "Santa Claus", and we want to give you the opportunity to pimp your desktop with a themed wallpaper.

Sanctum 2010 Tech Demo (Get the latest from Steam)

We've recently polished the demo of Sanctum a little since we entered the Indie Game Challenge and we thought it'd be a good idea to release the new demo...

This game is AMAZING. Just buy it with some friends and go play it ! It's just awesome.

I feel like buying the game... Just for the Yogscast DLC XD

Had hopes for this game, till you started doing DLC.

Are there any chances for more free updates? I like the game a lot guys, but any new content outside of two maps has been pay only.

Now it is available for Mac on Steam. The field "platform" should be updated.

So the beta is only new stuff if you have Mac?

I find the creators of this game very inspiring, as when I'm older I want to take up game making as a possible career/hobby, as I've wanted to do that since I was around 5 years old. I'd also really like to know what game engine they used to make sanctum, because I think the graphics are great! So, as I started with, I find the creaters of this indie inspiring role models, and hope to turn out like them one day!

Also, if the dev's get this comment, I would really REALLY appreciate some basic tutoring towards game making! :)

Sanctum is made using Unreal Engine 3.

The best tip if you want to start making games is to grab some user friendly tool like Yoyogames.com and try doing some fun things.. The second thing you need to learn is to write code :)

It is awesome to hear you get inspired! :-)

An interesting blend of FPS and Tower Defense. DLC is not required to play, but helps in a pinch (Violators are a must imo, helpful when placed properly, but don't think they replace AA).