With FarSky, you take the role of Nathan who got lost in the Ocean after the crash of his submarine. You need to learn how to survive in the depths of the Ocean. Use the environment to gather resources, build a base to refill your oxygen and manage all your items, craft equipment and weapons to explore and protect yourself in the Ocean depths, create an in-base farm or go fish hunting to feed yourself,... Your ultimate goal is to find all the pieces of your submarine, fix it and reach the surface. You can also choose to play in Sandbox mode to enjoy the game freely with a wider map! All maps are randomly generated to immerse you in an unknown world.

FarSky is on Steam! 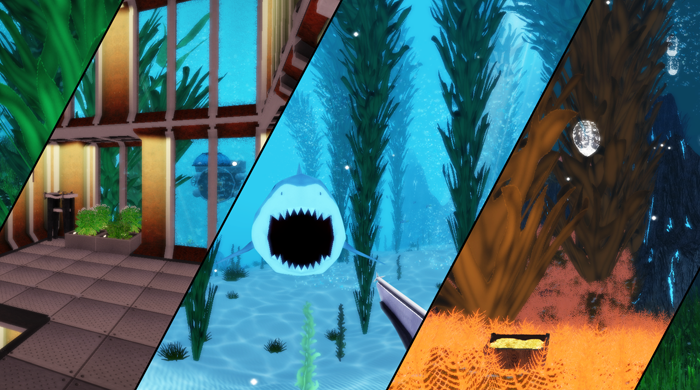 A lot has been added to the game for the final release. I listed all the defaults of the game and fixed them. I improved the building system to make it more intuitive, improved the global balance difficulty (mainly with the Kraken), added "steps" to cliffs so you don't need anymore the underwater scooter to go exploring, more variety in the world, all the workshop tables have been redesigned, more sea life has been brought (now there are tunas, dolphins, the great hammerhead and the great white shark). Many new features including finding and fixing droids so they can help you out by carrying items and protecting you. Also there are now gold chests you can find in the world. They give you coins you can use in Sandbox mode to buy equipment before launching a new game. Graphics have been improved, including the caustics effect.

Here is the Steam page: Store.steampowered.com
Have a look, and don't be afraid to dive into the depths ;-)

Abandoned base, Sandbox mode, Whales, and a lot more!

FarSky is on Steam Greenlight

Hey there, I just wanted to Say thank you for making such a great game. Genuinely the most fun i've had playing a sandbox game in a while :)
I did a video on it just to express my appreciation, I hope to see more things from you.

will there be more updates?

Will there be mod support for this game?

Little sneak peak with commentary on the soon to be release Steam version...updates are great! Youtu.be

This game looks really good from what I have seen on YouTube.
Question: Is there some overall goal to achieve, or way to "complete" the game. I've personally found games like Minecraft can feel a bit directionless and lose my interest after a while.
I'm hoping the end goal of this game is to find Atlantis or some such. :)

There is actually one. As you are stuck underwater (because your submarine broke into pieces), you need to find all the pieces to re-build it. Once it is done you can use the submarine and retrieve the surface!
There is no city to find, but you can actually find bigs abandoned flooded bases on your way through, with plenty of loots inside.

Want to see what you can do in this game and some info...here you go- Youtu.be

COOP in this would be spectacular.