Drovoid is a game about designing spaceships by assembling modules, programming them, and sending your ships to colonize space through mining and space battles. Spaceships can be manually controlled, or fully automated, or both. Drovoid can be played in solo or in multiplayer thanks to the included server. Automated battle ships can be uploaded to the Arena to compete!

This update is introducing a fun feature: full RGB LEDs for ships. Each LED module is a single LED which can display an RGB color with varying intensity. This can be useful for your ship to report its status.

However, to demonstrate the feature, I could not help but coding a little Mandlebrot fractal! Fractals are at the very heart of producedural generation (see for instance "Computer Rendering of Stochastic Models" by Fournier et al. 1982 (!) and many, many other research works).

Here is the final result: 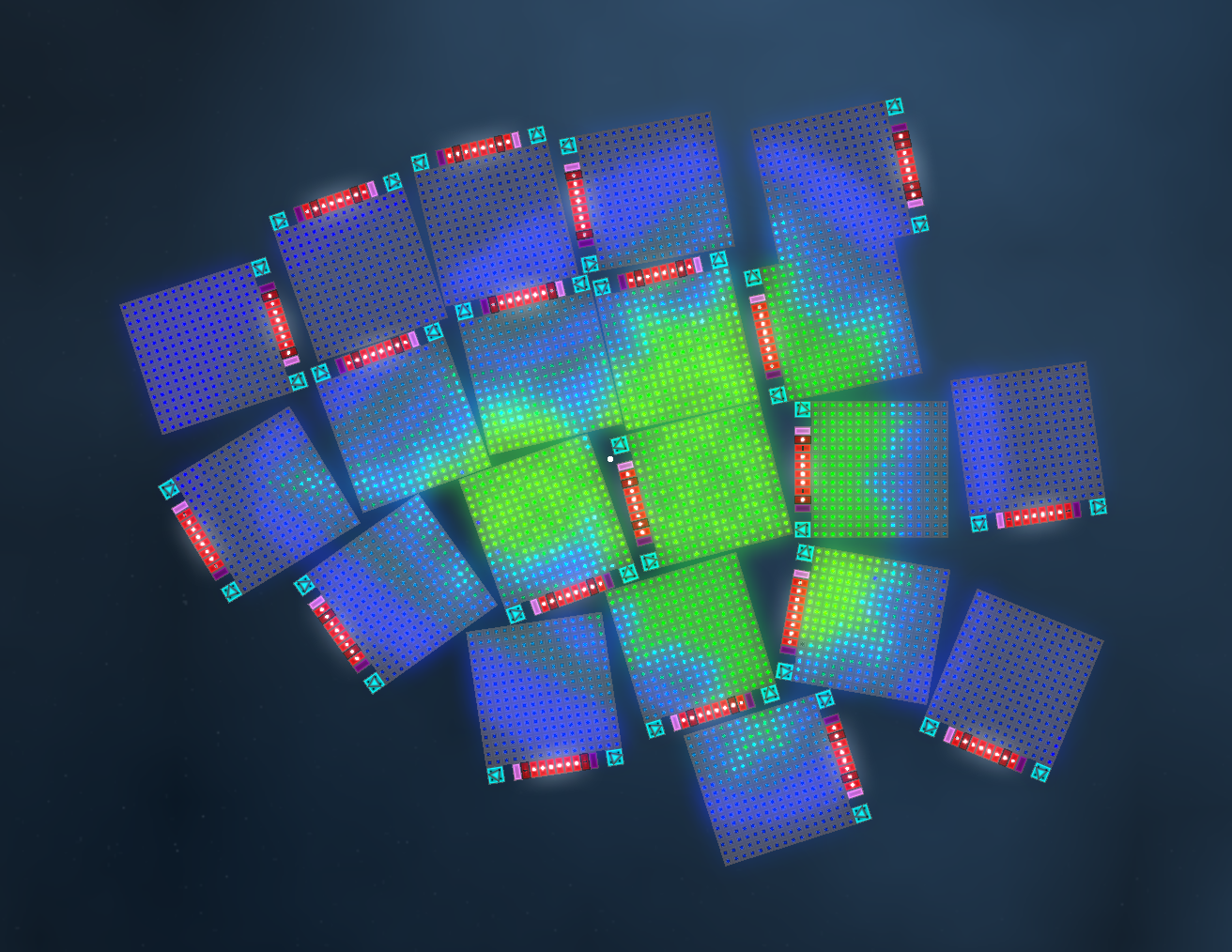 As you can see, multiple ships combine their displays to produce a larger image of the Mandlebrot fractal.

Here is the code running on each Program module: 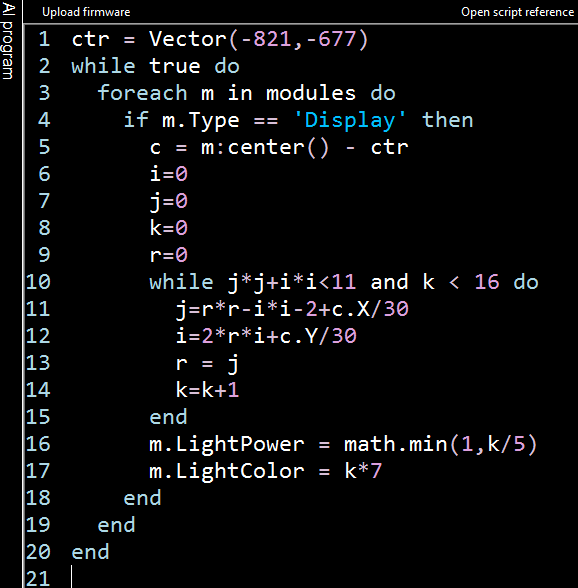 Quite simple isn't it? This is inspired from the code at the top of Ken Perlin's web page.

I hope we'll see many interesting and cool use of the LED feature! (Right now this feature is only available to registered players through the automated update).

The Arena lets you upload your ships and duel against others. You can now design and upload ships directly from The Arena. Want to challenge your ship...

Creating a ship in Drovoid involves a bit more than just throwing a bunch of components together. One has to consider power lines, data buses, and how...

Design ships and duel against ships uploaded by other players! This free demo lets you design ships using modules below level 3.

This free demo lets you create ships at level 1 and create programs up to 256 characters long. It is a sandbox demo: right from the start you will have...

Looks kinda like reassembly, but also looks different with more features and a tad bit more complex, the tad bit part being an understatement. Anyway, this looks interesting for the most part.

Thanks for your feedback! I agree the game can feel complex, especially the most advanced features (ship automation). I am currently considering ways to introduce the game features more progressively -- not necessarily through tutorials, but rather through a set of challenges (this feature existed in an earlier prototype). Also, I will simplify a few things: power cells in particular are I think too frustrating when starting the game.

Still, my goal is to provide a game that (hopefully) will allow for complex interactions/behaviors between ships. I want to keep the 'puzzle programming' aspects of it. The difficulty being to keep the depth but get rid of the apparent complexity :-)

The latest update improves these issues a lot I hope. It is now much simpler to create interesting (autonomous) ships. Building fighters and miners with the new modules is great fun. All ships can be manually controlled and know how to select targets and follow each others. No need to create complex module assemblies anymore. The power cells are much less of an issue (no more micro management), and there is even a small tutorial at the beginning! (the talking ship).

I stepped back a bit from the 'puzzle programming' to fully embrace the fact that Drovoid was meant to be a coding game :) I was surprised at how is easy it gets to code in-game as the scripting language (based on Lua) integrates well with the ships. Check the video for a quick overview (and then try the demo!) Indiedb.com

Hope you'll have fun with this new update!

Feel free to comment on the demo ; I am thinking of ways to make the game more accessible/fun at the beginning (my guess is that the start is a bit difficult?). A first step in this direction will be to provide a few simple ships to start the game. I wonder whether an in-game tutorial is necessary?

Also, if you experienced crashes at startup or when loading a game, please update to the latest version (demo file is up to date on indiedb) as I fixed a major issue.

Looks like great fun, best of luck with it.