Drovoid is a game about designing spaceships by assembling modules, programming them, and sending your ships to colonize space through mining and space battles. Spaceships can be manually controlled, or fully automated, or both. Drovoid can be played in solo or in multiplayer thanks to the included server. Automated battle ships can be uploaded to the Arena to compete!

Creating a ship in Drovoid involves a bit more than just throwing a bunch of components together. One has to consider power lines, data buses, and how components communicate. This new update introduces the ship compiler, that automatically issues warnings whenever something seems wrong in your ship.

Creating a ship in Drovoid involves a bit more than just throwing a bunch of components together. One has to consider power lines, data buses, and how components communicate. In Drovoid it could sometimes be frustrating to understand what was wrong about a ship not functioning properly.

Assembling a ship is a form of programming. And what helps programmers doing their job? A good compiler issuing warnings and errors! Well, this is exactly what this update introduces. A ship compiler now detects problems for you! Every time the compiler detects something strange it will let you know by overlaying a warning icon on the module, and by showing a message when the mouse hovers over the module.

Here a Thruster has been added as well as two triangular hull shapes, for good measure. Immediately the compiler tells us that there are two problems. First, the Thruster receives no power. Let's fix this!

We have added a power source, so now the module is powered. Note how the red dots became yellow, indicating that power is flowing. One warning remains: Nothing drives the module. This means it does not receive any orders, neither from user inputs nor from an automated system. The warning message tells us which modules can be used to fix this. Here we'll use a RemoteControl, so that we can drive the ship with the mouse and the space bar (pressing the space bar will generate thrust ; the control key fires weapons when present). 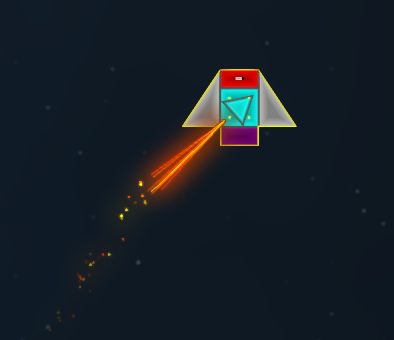 We now have a nice little ship to fly! Let's consider a slightly more complex ship: 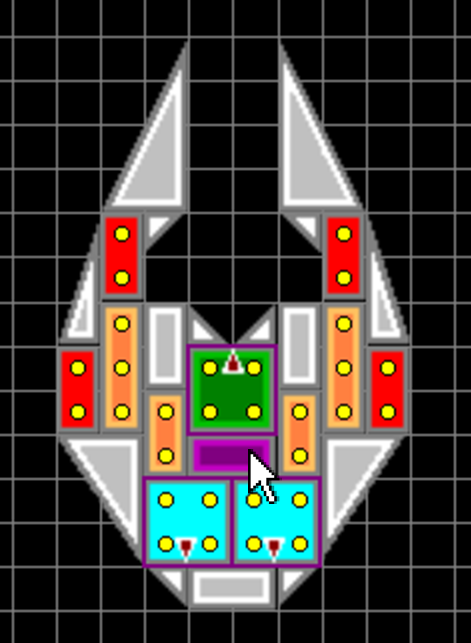 Here the mouse is on the RemoteControl in the middle and we can clearly see the purple outline on the two bottom Thrusters and the Gun (in green). There are no warnings as the ship is working properly.

Here the mouse is over the top right PowerCell (in red). The text at the top tells us how long this power cell will last before depletion (14 seconds). This is the time it would last if it were alone on the power line. In this case there is a second power cell, so if both are switched on they will last twice as long.

For the fun of it, let's remove both PowerCells from the right side. 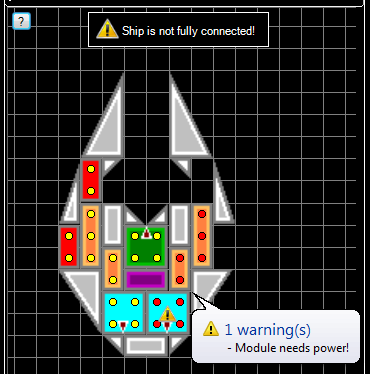 The compiler now tells us that the bottom right Thruster has no power. Note how the power indicator dots also turned red along the power line (orange modules). The Gun module (in green) still gets power from the left power line. There is an additional issue though! As shown at the top the ship is no longer fully connected!! This ship cannot be launched in space.

The ship compiler is included in the updated demo as well as additional changes: an improved space background, some bug fixes, an improved game launcher and a beta version of the Arena for registered players.