Dereliction: a first person sci-fi dungeon crawler Rougelike. You've crashed onto a barren planet. There is only a lone outpost visible on the wastes. With a team of friends, fight through an endless world, against a swarm of alien bugs; the Dross, an endless enemy. They are vicious, but an overpowering arsenal will certainly help out.

The RASSARA, as with the Dross, was fired upon and the resulting explosion flung the debris through space. The debris was scattered. Some fell onto ESE & OCI Planets, lush with flora and fauna. Endless fields of grains and the families who worked the land. the deepest oceans...

The dark sinews of the nest travelled into the crevices of the worlds, and rested. gaining sustenance of the soils it touched. Years later, the little fingers reached out, that seemed to pull closer as if it wanted to touch you.Deep down, the glowing yellows filled with liquid ADRINA that would glow in darkness.Then came the tall spires that began to push up towards the sky.

The spires poured out spores as they grew taller, and the spores were taken to the wind.

They wondered if it was snowing, but a few who were curious, maybe with a sniff and a taste, found it better than over the counter ADRINA and even those ADRINA++ that stuff needed a prescription.

The local inhabitants found a near endless supply of ADRINA and consume them unrefined and raw. Those who did, and there were many, experienced an extreme calmness, clarity and incredible boost in all aspects, as with the controlled, refined ADRINA that had Created from the Pharma Company. But with a near infinite supply, there was fighting in the streets as they madly searched for more and more…

But the Nest, which fuelled itself too with the ADRINA, found itself attacked and the Liquid ADRINA harvested en masse. And those who didn't get enough experienced harsh physical withdrawals that would heat the cells of the body hot enough that they needed to be removed. The doctors Tried their best, but with the ever increasing influx of those needing the help, the people who couldn't be helped soon enough had to do it themselves.

In order to protect the nest, The Dross once again created their soldiers. The small numbers were quickly destroyed and the nest harvested again and again. The Dross soldiers grew faster, in larger number. their carapace thickened and their eyes adjusted to the bright burning light that the attackers of the nest would flee to. Those who died, on either side, was carried into the nest. the lay there and the nest covered them, returning them home.

But, as the attacks became so feirce and fevered, the Dross unleashed themself onto the worlds. Anything deamed a threat was destroyed. And the Dross returned to the nest, with anything and everything of value to their nest.

But after those planets were barren of all organics, nutrients, and moistures, the Dross too started to die. The spores stopped. Leaving just a hollow stump as it crumbled and broke.the Nest retracted back where it started. What energy it had stored left, it hid, and would hibernate until even those stores were gone as well.

All those planets affected were quarantined and even after their deaths, are still no go zones. And those untouched were quick to report any signs of it starting. All the people on those worlds worked together to make sure their planet was clean. There were attempts to hide and try to recreate ADRINA in a controlled environment where an early infection was found. But ultimately those entire planets became quarantined and then no go zones. And people stopped trying to recreate ADRINA.

The memories of the RASSARA incident, and the Dross themselves fade into the past.

You wake up in an escape pod. The batteries must have finally drained. You cannot see clearly through the once clear hatch. But you know you landed. With the emergency release, you are relieved that the air that flows in is breathable. And you can see clearer that the sun, whichever one it is, is not only up, but blinding. Where are you? Who are you? All you know is theres nothing but snow and ice for as far as your eyes can see. So, What now?

All these questions are yours to decide.

May 16 update: I should write this down before I forget

Hello everyone, there’s been a lot that I’ve completed recently. Note that there’s not much that is game changing, pun intended. But there’s certainly a lot added, and even more polished, fleshed out. 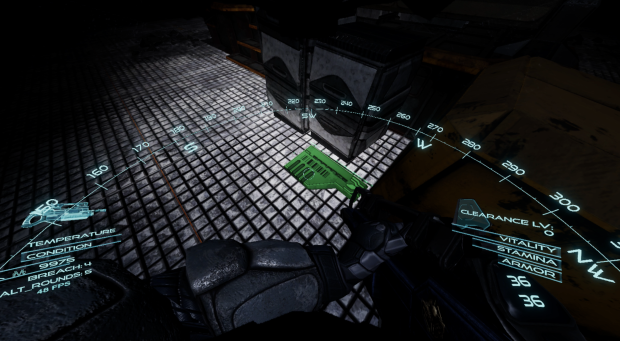 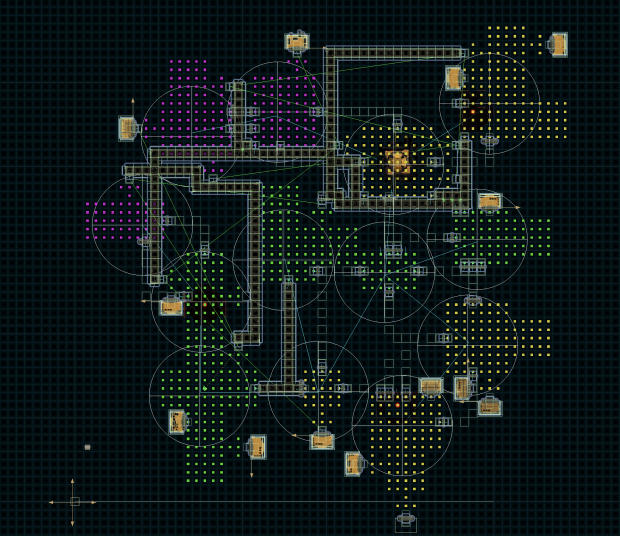 I added a security clearance for each room, generated for each floor. So, level 1-2-3 for example. And, it’s created so there’s a level 2 security key in area 1, a level 3 in area 2. This encourages more exploration around the level. And it really kinda fun. There feels like a bit more purpose to exploring. The keycard shows on the minimap so there isn’t too much frustration involved. 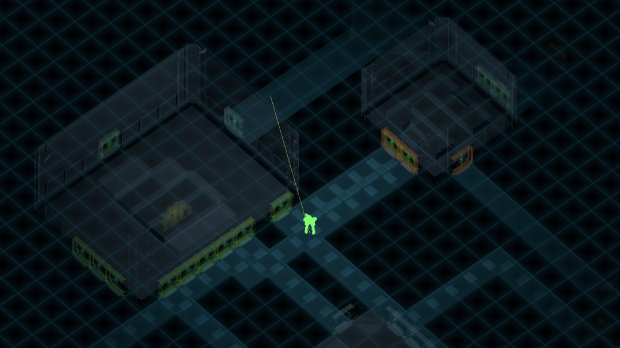 I’ve written a list of stats for the player. There is a fair amount left to add, but I feel closer to what feels right. As well as it all feels more meaningful.

My original ideas stemmed from the name Dereliction. As well as a bit of entropic themes.

So. Let’s say the player starts with 10k rounds of ammunition. And ammo restocks will be not super common. So the player will need to conserve ammo, even when they start with a very large amount, to last a long time. Similarly, permanent non healing damage, just a small percent of damage taken. But it will slowly add up. The player will start with full mobility, capacities, for example. And gradually it will wear down. Of course, there will be ways to increase these stats too. Not necessarily repair them, but compensate for any losses. Of course, it is ideal not to lose these stats so any increases would be a net positive instead. As these upgrades would be rare, or expensive.

For this I’ve added locked “chests” to use the breach charges on. And I’ve limited the doors to the small rooms, which hold valuables, to be the only doors used with the charges as well. This ties in with the added security doors, as I was having issues.

In between the major changes, as well as some of the major changes, was just general improvements overall. So new art, better art, more variety. I did some serious optimizing for the corridors. They are now more interesting and do not fail as often, so require fewer checks after they are initially built, lowering load times. 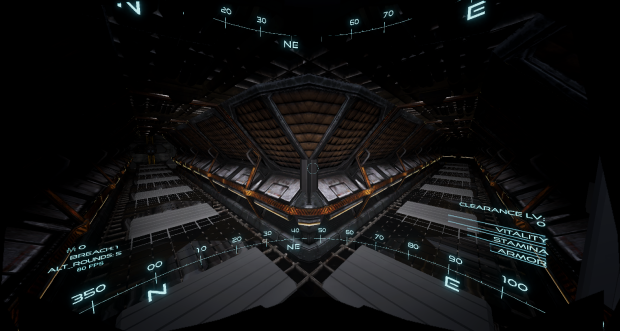 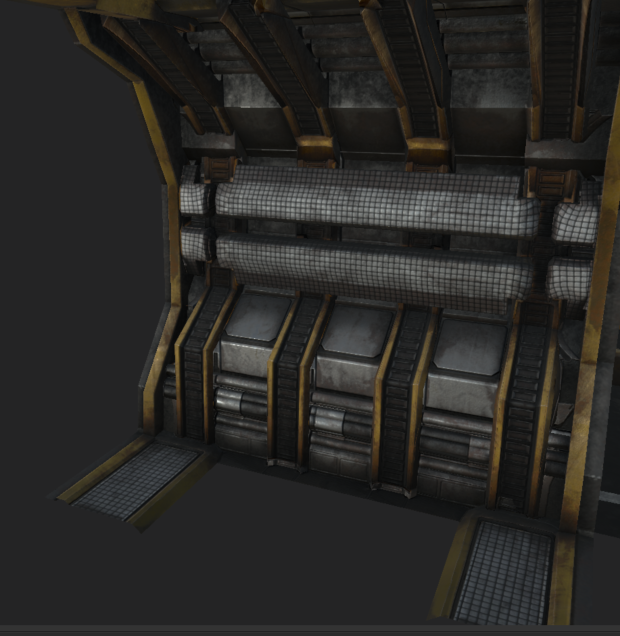 I’ve been delving into instanced batching as well. So far it’s low cost at load, finds all identical meshes in a room, which is currently many many smaller panels, which allows the modular environment. There’s small pieces then instance themselves from the main or first mesh, so the first one costs the system performance. And all subsequent bits are free.

There’s also minor changes, such as keycards are given ideal positions, if they find any, such as on top of tables, compared to just placed on the floor.
By my estimate I’d say that 20% of what’s required now is added stuff, and 80% polishing existing stuff. This is for the core loop of the game. So, between starting and finishing one floor. Then I would focus on progression

Ok that’s about it, this update is necessary but also very in between good things, everything done feels cleaner, more solid, but there’s still a lot more to go where I’ll feel satisfied with how it looks and plays.
Till next time,

Hello everyone, here’s a bigger update on how DERELICTION is going. Combat, gameplay, optimizations, bigger swarms... Just a lot. Lots of work, lots...

Heres some progress made with animating, rigging, and shared animations between the enemies. Also some new artwork.

Im a little late for an update, but theres a few things that I must fix. And, they're taking a little longer than expected.

So its almost Jan 26, and Im working hard to get something small but playable ready, and its going well. Dereliction is a Co-op PvE First person Rogue-like...

Things still going according to plan?

More than slight hiccup, working on it tho. Didn't want to write about getting something not working, but its been a little longer than "just one more day" So, I should probably mention it soon.

All's well tho, just not all's done tho

thats me and me :P Ill work on my video editing

Am checking your updates for quite some time now and I really love what I see. Your game has a really unique look and feel to it. Can't wait to see what you will do with the enemies once you start working on those. Do know you have for now as a test enemies the sort of spider npc's, and they will be quite scary ones they get animations.

Thank you for the support, Its nice to hear Im doing something right!
Im trying to do something unique with the enemies, and not use skinned mesh renderers, but, once thats working, you will definitely start to see some animations
Cheers

Working on getting a build up ATM

This may be something! Keep it up.