The AMC Squad is an epic story-driven FPS running on the Build Engine. It combines gameplay mechanics of retro-shooters with aspects of modern titles, complete with a story-driven narrative that spans over several episodes.

Each episode is a full-length campaign featuring multiple varied locations to explore and many hidden secrets and collectibles to discover. Experience an overarching story that is loosely based on the worlds and settings of other classic Build Engine games. Pick from more than 8 different character classes, each with a unique loadout of items, weapons and abilities, and fight a large selection of different enemy factions that threaten the safety of the world.

Join us on Discord!

Check out the official wiki here!

Repository for the engine source code

The AMC Squad is a paramilitary group formed by a man whose identity is unknown to all but a select few in the EDF and EAF. Using funds from both agencies, he hired an old friend to track down 7 of the best and most skilled fighters in the Solar System, after the disappearance of Earth's greatest hero. This squad was formed to tackle the most severe threats to Earth's safety, including fighting off the notorious Cycloid race of aliens. However, they inadvertently set into motion a sequence of events that dramatically increase the scale of conflict, and they must soon deal with a threat that is new to even the most supernatural members of the team.

Can you fight as the AMC Squad, and take care of this threat? Will you scour the battlefield, find and acquire research and equipment and tackle the threat strategically, or simply run in guns blazing? Will you choose to play as Sangluss, a warlock with great power who overcame a dark past? Or as Merlijn, a knight from Holland who wields ancient weaponry to deadly effect? As Mikko, the cybernetic leader of MS Corp industries, who brings a range of deadly and hi-tech weaponry to the battlefield? Or as Highwire, who relies only on his good old-fashioned military rifles, and a trusty bottle of Vodka?

Whomever you choose, be prepared for the fight of a lifetime.

Episode One consists of maps built by James Stanfield, Rusty, Geoffrey, Highwire, Mikko Sandt and Sangman, and a map donated by Mike Norvak.

Episode Four consists of maps built by James Stanfield, Michael Crisp, Sangman, Loke, Alicatgamer, sebabdukeboss20, and Highwire. It also consists of maps donated to us by DanM, Mike Norvak, Forge, Drek; and unused sections from the cancelled Survival project by Numan and Toadie.

First of all, happy new year. We're happy to see that Episode 4 was received very well despite it being a fairly different experience to the previous episodes, especially with the focus on a fantasy setting. Originally the Ringworld was to just be the first half of episode 4, but we decided that it deserved much more space and justice than just being the starting portion of an episode could provide, and ultimately didn't really contribute to any significant delay. We actually managed to push the episode out nearly half a year earlier than the usual 4 year gap, and that was with 2 additional significant updates (the art redux and then the 10th anniversary)

Mikko has published his review of episode 4, which you can see here - if you've made a review of AMC Squad or a YouTube video covering it, by all means share it with us here or on our Discord

8th place in Indiedb of the year!

Needless to say we're incredible grateful to all the votes you've cast for us - we've managed to breach the top hundred before but this is the first time we've made the top ten, beating out some very heavy contenders.

Work on episode 5, Perfect Storm, started not long after the last patch; several of our mappers had already started work on maps for episode 5; release will still be some considerable time away, but we're hoping to beat this episode's record and get the final 2 episodes out much sooner. You can see the first released screenshot as well as the poster for episode 5 by sebabdukeboss20 in our media tab here. As usual we keep pretty quiet with development, so don't feel disheartened if there's big stretches of time without any updates (but as I've plugged before, our discord is active so join there if you want more info or ask us some questions) We've also finally updated the tiny hard to read conversation font for this episode, no more straining your eyes! 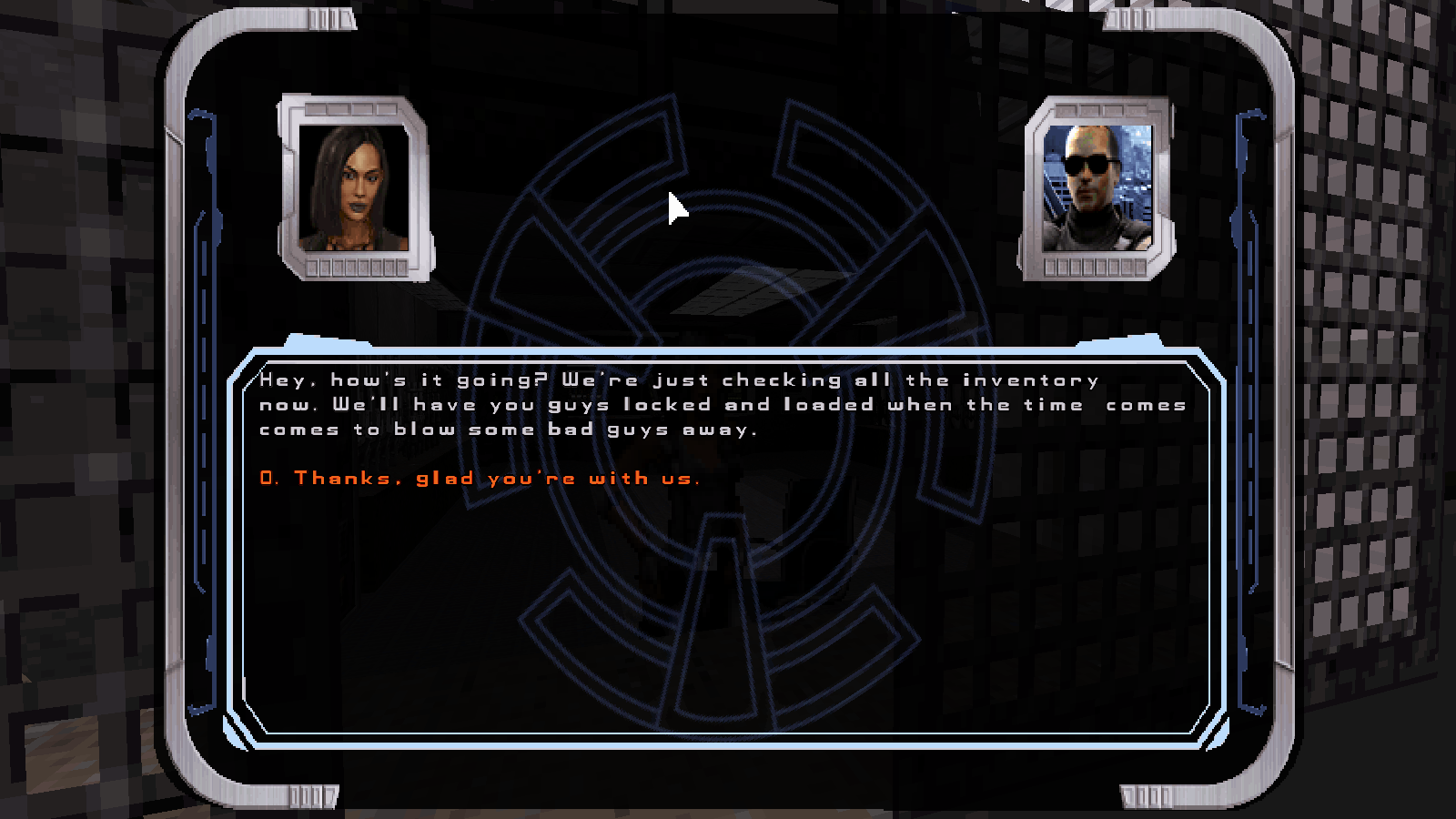 We're always in need of mappers to help make the scope of the project possible. The same goes for voice actors, we're mainly looking for more female VAs to help out as well as older males to voice some of our more gruff characters. Post on our discord for more info!

Patch for episode 4 of the AMC Squad containing a bunch of fixes just got released.

The AMC Squad v4 is released, with the brand new Episode 4! Read on to find out more.

Trailer for Episode Four and we're expecting to release in October!

The AMC Squad v4 -- a standalone single-player FPS running on EDuke32. This release contains Episodes 1-3, as well as the brand-new Episode 4, with original...

Patch for Episode 4 of the AMC Squad. Includes a bunch of fixes.

The AMC Squad 10th Anniversary Edition -- a standalone single-player FPS running on EDuke32. The game takes place in a universe loosely based on Duke...

Episodes One, Two and Three of the AMC TC - a standalone game based on Duke Nukem 3D. This release contains all released Episodes the AMC TC, so if you've...

wouldn't it be better if patch was included in main game file?

Went ahead and did this now, hopefully no more confusion!

Yep, was gonna do that last week but real life interfered. Thanks for the reminder..

Congratulations on making it to the Top 10 Players Choice Indie of the Year, guys!

I’ve got some questions regarding scrapped content. Some side missions from the previous versions was removed, does that mean decorative collectibles from that missions are gone too? Or I can still get these collectibles if I copy the map files from the previous version of the game to the recent one and load the level from the user map menu?
Also, why Ranger rocket launcher weapon was scrapped? It was cool.

You can still get the collectibles that way, they're still in the way just not attainable anymore for now. The Ranger was scrapped since we couldn't find a good replacement model sadly.

Hi Jblade35, you may not remember me but I've been a fan of AMC Squad since episode 1. It's been an amazing journey seeing how much the project has improved over the years. It's hard to believe I was only a teenager when it first released. The sheer amount of content is unheard of for a free game and I love the addition of CG cutscenes. I'm curious, have you pitched an official Steam release to 3DRealms? Surely, your team deserves to have this game monetized. Voidpoint officially released Ion Fury to great success in collaboration with 3DRealms and I would love to see the same happen with AMC Squad. Thanks for everything.

Thanks, glad you're still enjoying it after all this time - nah the closest we came was thinking about a free steam release but there's still too much stuff that would need replacing to not get us in potential trouble.

also thanks for the Ko-fi, greatly appreciated!

James, I have probably only messaged once or twice on this comment forum, but I have been playing AMC since Ep1 and I still love and enjoy it tons! I even remember back to when there were the rotating mission platform separate from the story, I never even got through all of them but sad to see them go. The reason I am writing though is to be honest, after all this time there are still secrets, weapons and research projects I am trying to find. Would it be possible to request a guide, at least where to find all projects and weapons? I would appreciate it so much as due to the coverage of the mod I can never really find secrets walkthroughs like most over games. Thanks so much!

Short Review of Episode 1: A very interesting and ambitious mod to say the least. My absolute favourite aspect of the mod is the additional gameplay depth granted via new mechanics: sliding, leaning, sprinting, wall kicking, karate kicks, alt fire modes, alternate ammo, weapon upgrades, rolling/dodging, weapon reloading, melee weapons, temp weapons, basic loadouts, interaction with more object types, PDA/scanner & inventory. These mechanics are what drew me to the mod in the first place but I was…

Indie
Tags
Embed Buttons
Link to The AMC Squad by selecting a button and using the embed code provided more...