You assume the role of team leader in the tactical response team of a major city police force. Your work is to plan and carry out tactical entry in barricade and hostage situations with the least possible loss of life the desired outcome.

Crisis Response is a side-scroller that strives to provide a realistic model for projectile interactions and injuries. Once someone is hurt the player will be working against the clock to save them. Gear and tactics must be chosen carefully to minimize damage and resistance.

It's been a while again since the last article. I didn't write about the previous update but I'll skip that and focus on the new one. If you've been following you'll know what's happened, and if you play the game it contains all the previous stuff too so there's nothing to miss. Here's the new sandbox:

The new update focuses on performance improvements. It's been going through some rounds of testing already and in terms of performance it looks like a good improvement over the last release. Many have voiced problems with performance in the previous versions and I think it will be a bit better now.

What did I change to improve performance then? I have rebuilt many parts of the resource management so that I have better control over how many objects of certain kinds can exist at the same time. On top of that I've redesigned some parts of the menus and user interface, to make the performance settings more understandable. I think that will help as well.

Entirely new is the benchmark feature. The benchmark is a small level that puts three characters through a hail of bullets several times over, with steadily increasing settings. The frame rates are recorded and in the end the game suggests settings that should result in good performance.

There is a new in-game feature too. I've made it so that blood leaving wounds under high pressure form streams. The streams turn into particles as they fly.

The new blood streams in slow motion, breaking up into particles.

When the streams hit the floor they bounce off and break down into particles. It creates a kind of splashing effect.

Blood stream hitting the floor and breaking into particles.

Blood stream from a stationary character.

I've also implemented a very simple dismemberment that is triggered by the fragmentation grenades. It's very basic so I expect to improve it more later. 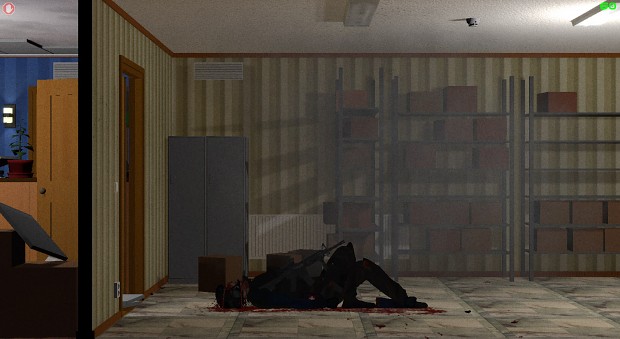 This character held a grenade when it exploded and lost a forearm.

I want to thank everyone who helped me test the release. Throughout the testing I changed things with the blood several times as you may have noticed. There are many parameters that make up how the blood looks and functions, and the final result is a compromise between a number of different things. I still don't feel I've found the perfect blend of those factors so I will keep tweaking. You can expect it to change again in the future.

Thanks for reading. Try the new sandbox and please share it around!

The marksman demo is available! This adds the marksman to the team and a lot of other improvements.

Have the marksman hit targets in front of you by the press of a button or control it yourself. In this post I go over the current state of the marksman.

Demo available and what comes next

This version introduces the marksman. Control the marksman yourself or command it by passing orders. And a lot of other improvements! Last updated September...

Long in the making, here is the new Unity-based sandbox demo of the game now called Crisis Response.

First release / possible demo / full release of the addon. Tip: Backup your hostage files before installing. To do that, go to "bloodandbullet/data/graphics/bodies...

The third Blood and Bullet demo adds more game play mechanics. Use concussion grenades to overwhelm the suspects. Restrain them, secure their weapons...

This is one of the best tactical games in my opinion and I really like it, but it would be better if there were more weapons, for example, Makarov pistol, Colt 1911, AUG, AK-74M, etc. And also the ability to change equipment or something like that.

Game of the year

if you want the latest version or the taser hostile weapons addon
join Discord.gg

yeah this is legit, nice.

this mf is legit real, I tried