Welcome to the fantastical land of Ardenfall - a world of intricate politics and ancient cultures. Join a powerful guild and work your way up from a nobody to a legend. Explore a varied world of interesting monsters and locations. Charm, convince, or lie to a unique range of characters.

Hello and welcome to another Devlog! This month saw Ardenfall hit its third year in development, what a crazy ride! Beyond that, it's time to show off a new set of features, creatures, models! If you missed last Devlog, be sure to check it out here. And if you want to learn more, be sure to join our Discord for the newest updates!

The Tomachu is a common creature found in the wetlands. The male Tomachu are small, with large wings used for mating. They move quickly, but cannot inflict much damage. The females, on the other hand, sport a large stinger used to propel poison large distances. This, combined with its speed, makes it a brutal foe indeed.

Tomachu Larvae are considered a delicacy in the Wetlands, and will sell for a pretty penny for those with a taste of danger. 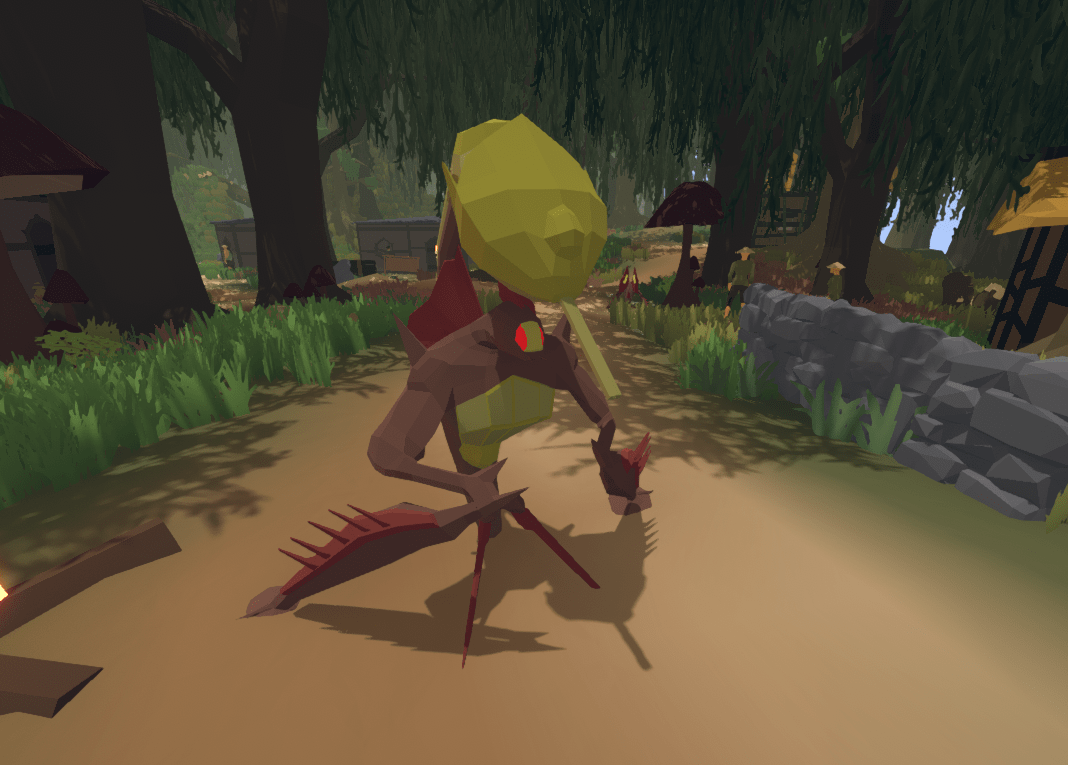 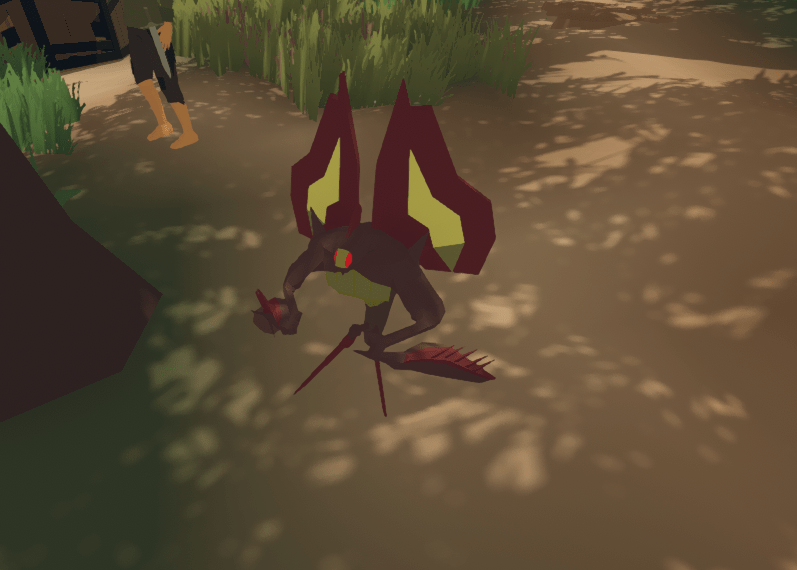 The Venuki are strange plants that seem to have a mind of their own. Whether by magic or by nature, they are a dangerous sight to behold. They fling razer sharp leaves at their enemies, as well as spitting large seeds that slowly follow their target, like a ghost haunting their prey. If one gets to close, the long teeth of the Venuki may be the last sight of their life.

If one can manage to slay such a horrifying beast, and luck permits, they may find a set of glistening red seeds, which upon throwing to the earth, will grow into a small venuki, ready for their commands.

Here's a sample of the models and concept art that our team has been hard at work on!

A new wetland building has been both concepted and then modeled! This is quite a large one, and is semi modular. Will most likely be used as important buildings, such as a guild hall or even a shop. 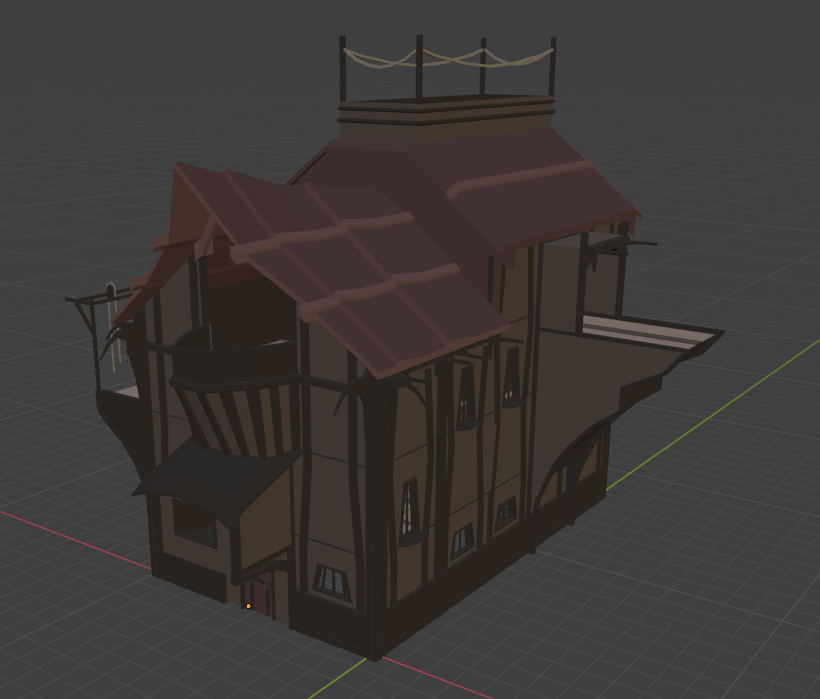 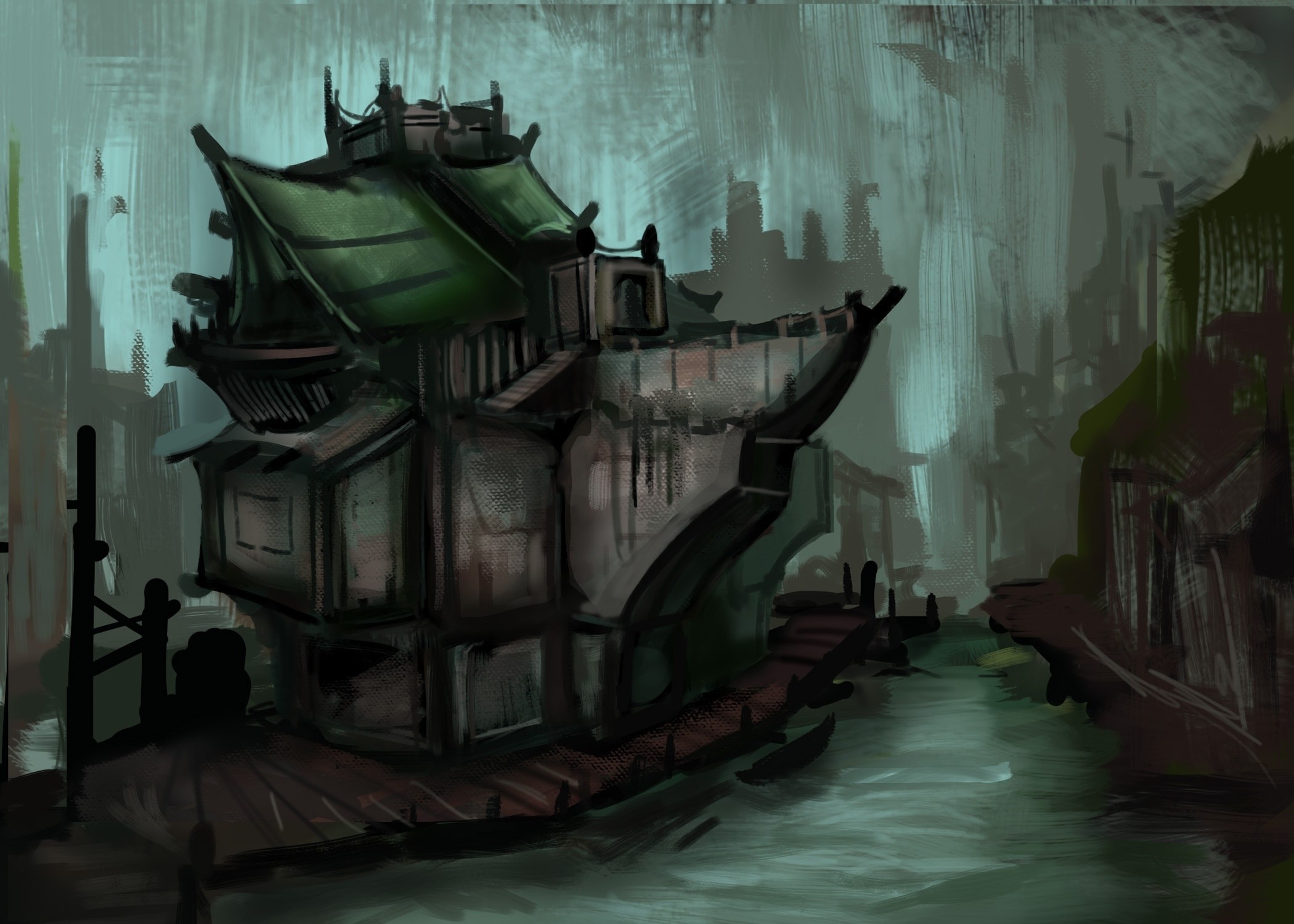 The Garvak, a tribal beast folk found in the deep Wetlands, are not merely animals, but form their own complex societies. Thus, alongside with contributing to the hunting of prey or gathering of resources, a Garvak often finds themselves as a warrior, shamen, or other position to aid in the protection in their tribe.

Deep within the lush woodlands of southern Ardenfall, lives the massive slithering giant silk worm - the Shanovu. While this beast is relatively benign while alone, they become an incredibly dangerous threat when in a group.

The people of the wetlands are known for their innate ability to man a boat in the dangerous swampy landscape, and survive to tell the tail. There are many fish only found in the region, and return a large profit - many Wetlanders use this to their advantage. Their boats are constructed out of the tough Nakiba wood, and is often adorned with a cover to allow one to remain dry even during the rainiest of days.

While the Bakovicould crush even the strongest of creatures under its massive weight, the large beast is quite calm, and will spend most of its days searching for lichen or leaves found on tall trees in the Wetlands. Fungi sprouts from the brute's head, down its neck, and often spread upon its body, but instead of hurting the Bakovi, the mushrooms act as a layer of protection. 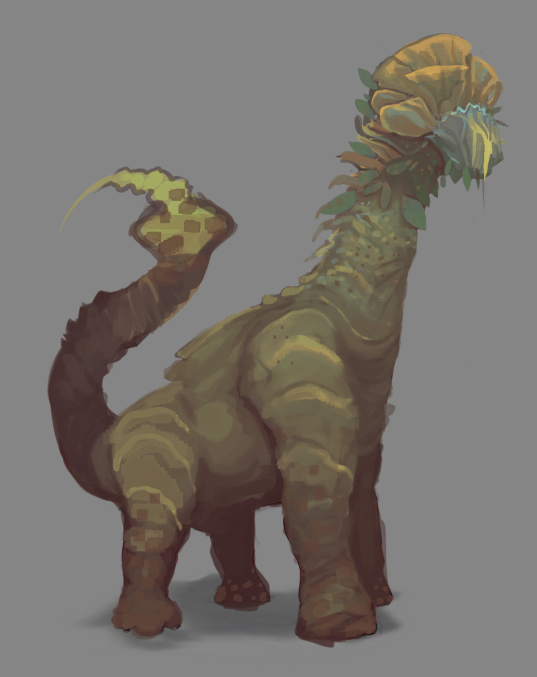 At least, the Package System has been fully implemented. This system allows for dynamic NPC actions mainly during the Idle State. Packages can be added dynamically, such as during a quest or special event.

NPC's can now interact with objects, just as players do. For example, if they so desire they may sit in a chair. However, this can be taken a step beyond merely sitting in a chair, and also allow for custom animation overrides. Leaning on a bar, sleeping in bed, and warming one's hands by the fire are all examples of this system!

Various objects get tagged depending on how they're used: a farming animation would have a "farmer" and "work" tag, while a bed would have a "sleep" tag. Packages often want the NPC to interact with defined tags.

Often, a certain package or quest will need a certain area be defined. There are several options for this! They most interesting ones are the "Record Volume" and "Home" options. A record volume is a volume added to the record system, which means any system can reference it. You can also define a NPC's home, which allows for easy referencing. This is perfect for telling the npc to go to sleep in their own house!

Packages can of course be arranged by a schedule! Now NPC's will work in the day, rest in the evening, and then sleep at night.

The best sleeping animation ever

The enchantment system has been redesigned from the ground up to better align with other systems as well as ensure better modularity. Now an enchantment can consist of multiple Enchantment Effects, which can range from weapon buffs to applying a status effect to even casting a spell. The possibilities are endless! 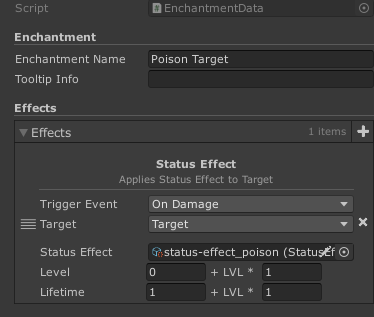 Along with the new enchantment system comes a new spell system. This system follows the same design as the new Enchantment and Status Effect systems, allowing for modularity. A key aspect of this system is to detach spells from an item, and allowing a spell to theoretically be casted anywhere, by anything: a trap shooting a fireball, a monster exploding, or even shooting an arrow will all be considered a spell. Another addition is the ability to chain spells, by attaching a subspell or external spell to a Spell Effect Event. 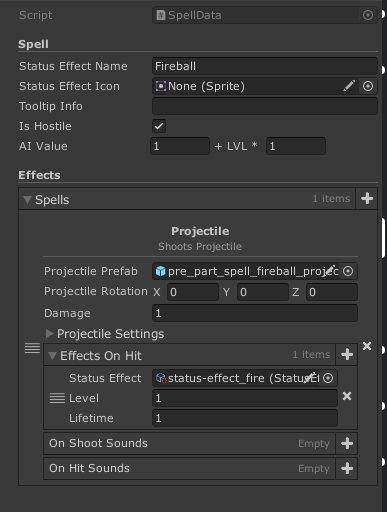 One huge annoyance when using Unity is trying to find what prefab you're looking for. The searcher is lacking, it's often hard to trudge through the models and other files you don't care about. Thus, I've started building a simple tool to allow for easy placement of prefabs. Tags are handled better, only specific folders are searched for, and it supports drag and drop, just like the Project Window. I plan on releasing this on Github, so stay tuned!

A screenshot is now saved in the header of a save file: get a nice view of what you'll be loading! 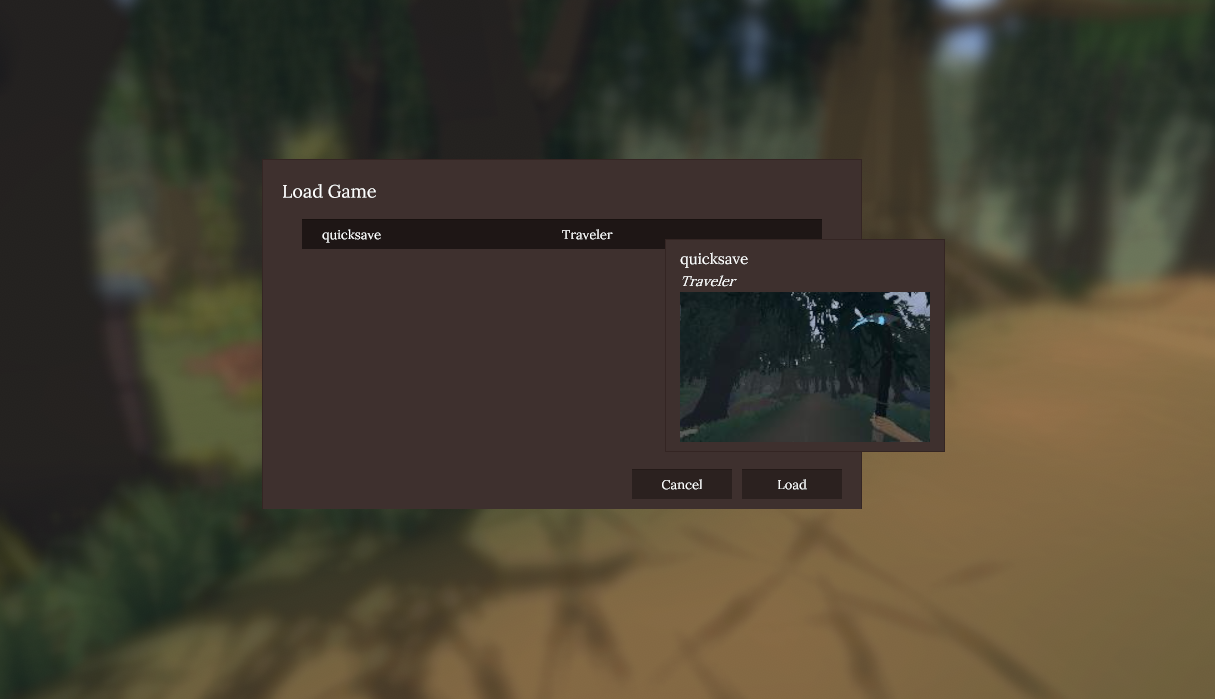 Two types of pads! One that makes you bounce in their air, another that gives you an affect, such as a speed boost! Fun for dungeons :) 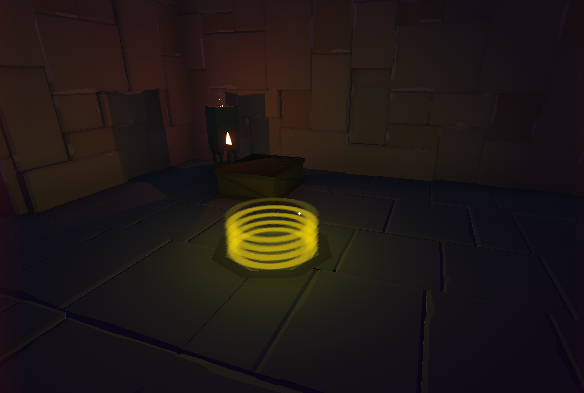 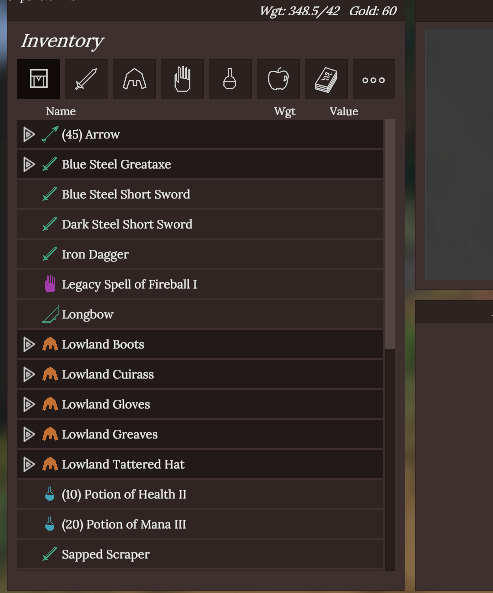 And thus ends Devlog #15, definitely a large one! I hope you enjoyed learning about all of the hard work the team has put into the project this time around! If you want to learn more or talk with the developers, be sure to join our Discord below! Have a wonderful day :)

In the 14th devlog of Ardenfall, the Open World RPG, read about all of the new exciting features coming to the project! New weapons, locations, monsters...

New monsters, items, and features are all shown in Devlog 12 for Ardenfall, the open ended RPG.

Devlog 11 brings updates on our swamp environments, as well as new foliage additions. Several new major systems have been implemented, such as the Quest...