Hi, dear Fractal Space players! We have made a major update v0.54 for the PC version on Steam! This update has many improvements, including both visual and gameplay enhancements. We’ll detail most of the important ones here!

We hope you will enjoy these new changes! 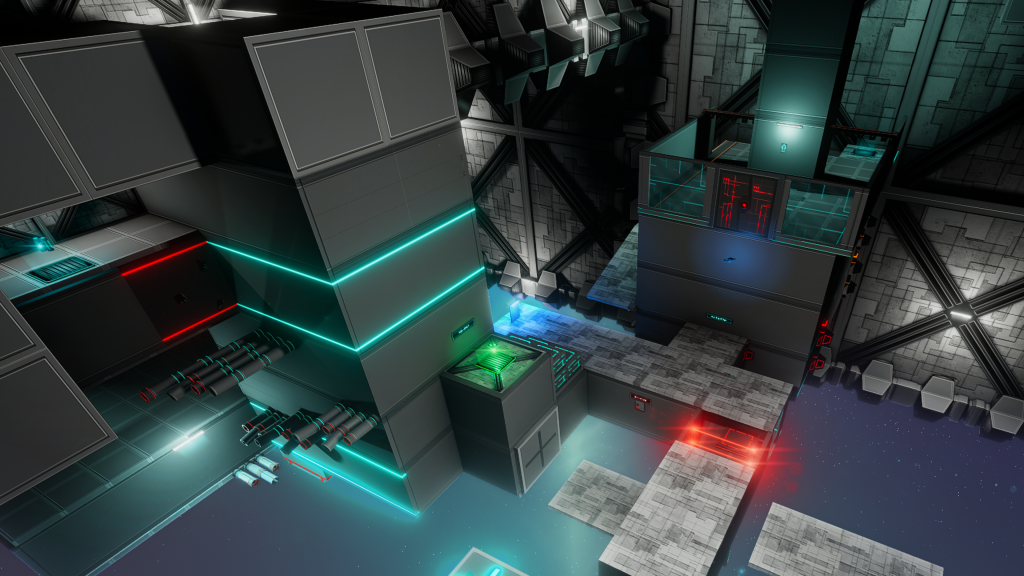 We are planning to publish a few more updates in the upcoming days & weeks, much faster than this one, in order to fix all the remaining bugs and the new ones you will find in this update.

First of all, we’ve been hard at work getting a first development demo ready on Xbox One for the Summer Game Demo Event! We wanted it to be ready at the same time of revealing the game on Xbox One. The demo contains the first Chapter of the game.

We have also been working on a public demo for Fractal Space on Steam. It will be live end of July or early August!

Please note that players that already have a Steam key, will not have access to the Demo, as Steam only allows users to access a Demo if they do not possess the full game yet. If you want to try it, you will need to create a new Steam account.

This Demo will allow players who are waiting for a Steam key to still play the first Chapter while waiting. The demo doesn’t require the birth year input because it isn’t used yet in Chapter 1.

As a celebration of both the Xbox One reveal of Fractal Space, and the new update 0.54, we have released a new trailer for the PC version!

Here are listed general improvements for the game:

This is a major change, that took a lot of work. The Taser-Gun on PC has now a new exclusive 3D Model! 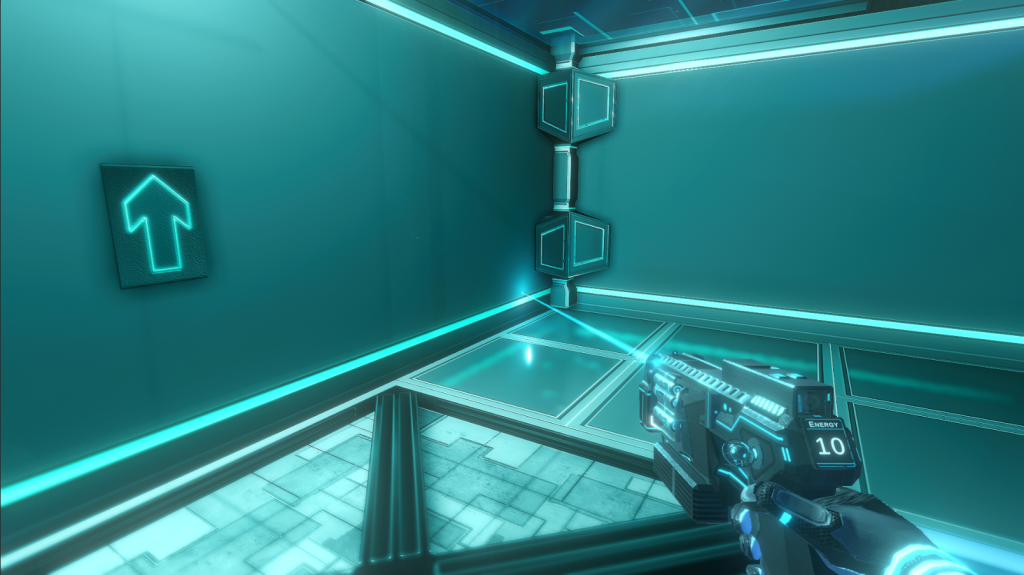 Note 1: The new Taser model, and Taser Modules are not all finished; They will be improved over the next few updates.

Note 2: The new Taser will have improved Shoot animations, and Reload Animations to replace batteries in future updates. There will also be a new system for Taser Power Level 2 and 3, using a new charged Hyper-Shot system in future updates.

The main character now has hands! 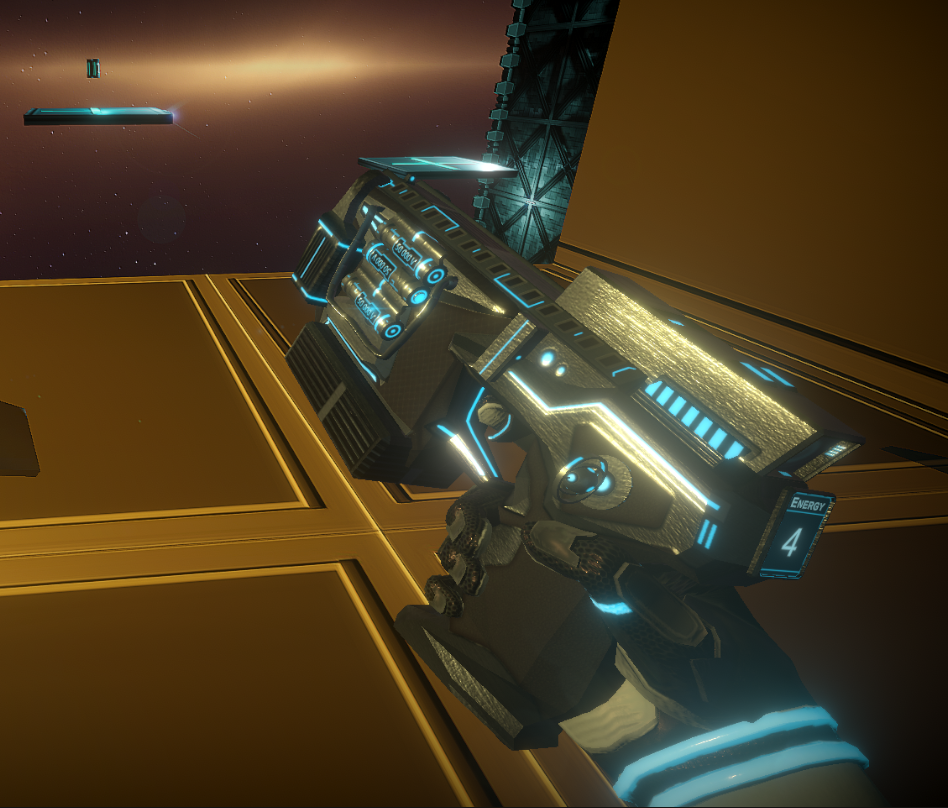 We are planning to add hands and animations for the following (not implemented yet):

We have added a new animation for Healing! 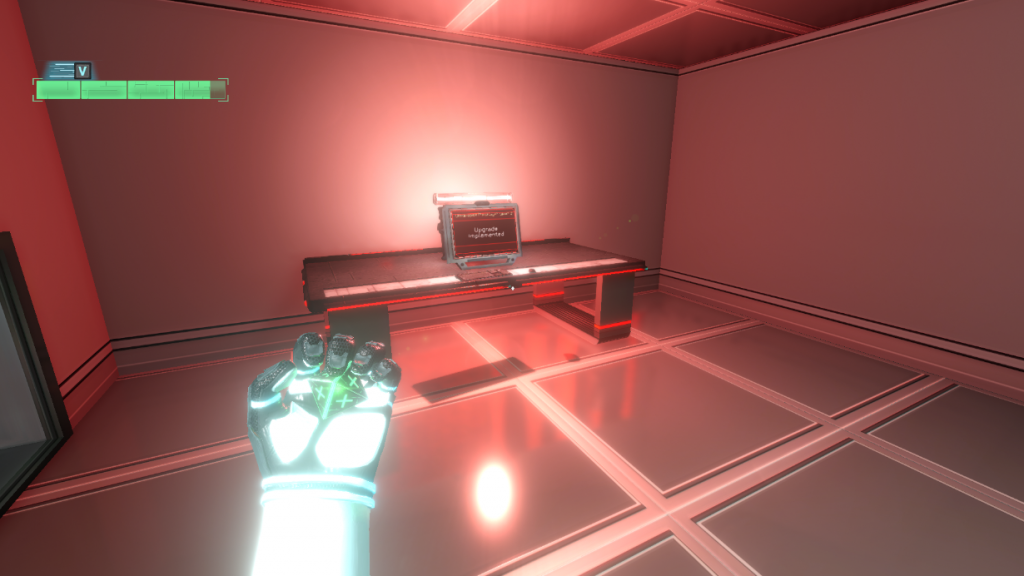 Having Heal delayed by 0.5s or 1s would be frustrating in this game; we made sure healing is still instant behind-the-scenes. The heal action is executed at same frame as heal request.

However, the visual increase of the Healthbar and notification / sounds are delayed to be in sync with the new animation.

Don’t worry, Speedrunners, you can still heal right on time, at the last frame before being hit, you won’t be punished by having to wait for animation to complete to actually be healed – you’ll just see that you are healed to a value lower than your max health if you are damaged during the heal animation 😉

In this new update, a first draft for most of the player character new dialogs are now recorded; however, some still aren’t good and will be improved in a next update.

Speedrun mode disables most dialogs, so if you want to test them, you will have to disable Speedrun Mode. 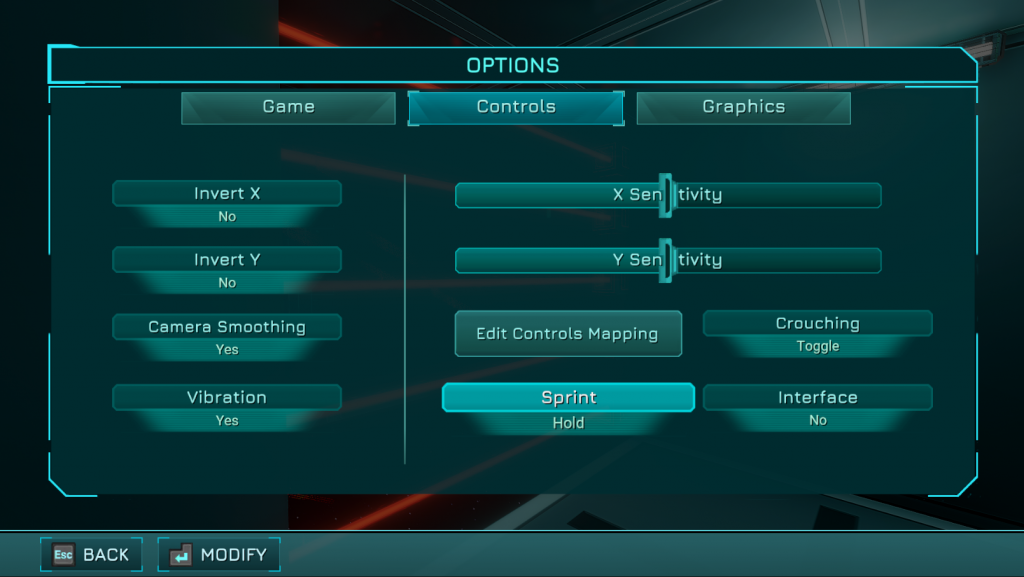 Sprint controls were completely reworked and improved to be more reactive and more comfortable. New Option to choose between HOLD or TOGGLE for Sprint behavior. New default is now TOGGLE:

NOTE: After Toggling ON Sprint, if you only do very small movements, it won’t be toggled off automatically. This is intentional to allow you to do micro-adjustment movements before actually sprinting without having to toggle it on again.

Sprint and Zero-G Boost now have icons to show if they are toggled ON or OFF:

We have made 3 main changes to moving platforms in this update. 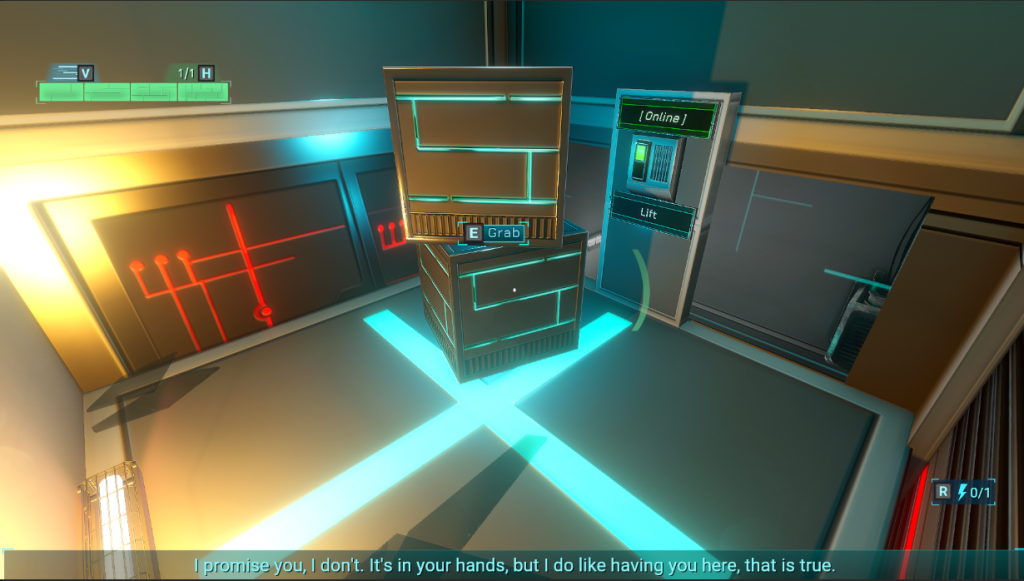 We have reworked the system behind moving platforms in order to solve the following issues:

From this update, moving platforms movement is now correctly applied indirectly to any object placed on the platform, or stacked on top of each other.

This change is a complex one; it might create new bugs with moving platforms, the player and Cubes; to be tested!

Known bug: Pushing Cubes on currently moving platforms results in pushing them very fast – that issue will be solved in a future update.

This change required to check every single moving platforms of all levels – it’s possible I might have missed some – you may find bugs in some Chapters with moving platforms.

Moving platforms and Crushers now have a smooth acceleration and deceleration, tweaked individually on each platform. This improves the feel of the game by having less “abrupt movements”.

Many improvements and bugfixes to the Dodge upgrade were made. 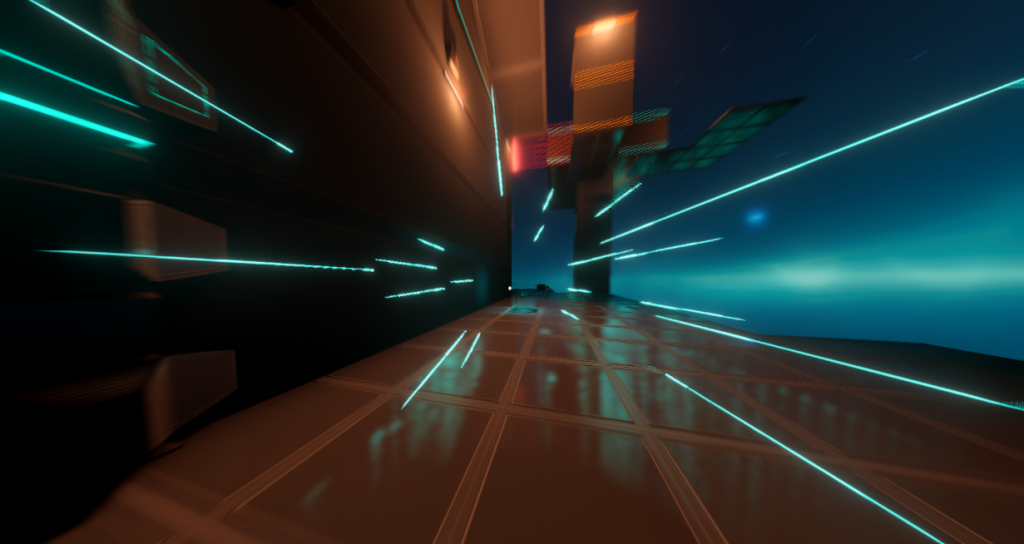 We’ve changed how Dodge verticality is handled in the game:

You can now Dodge DOWN – however, it’s only possible if you are in the air AND looking “down enough”.

Looking only slightly down, or requesting left / right / back dodge direction will still Dodge horizontally.

This is intentional to avoid dodging down when you are only looking at traps on the ground, and trying to dodge over them.

It will now Dodge better in the currently requested movement direction.

Exceptions: Always dodge “fully forward” if you are not requesting any movement, or mostly requesting forward movement only. 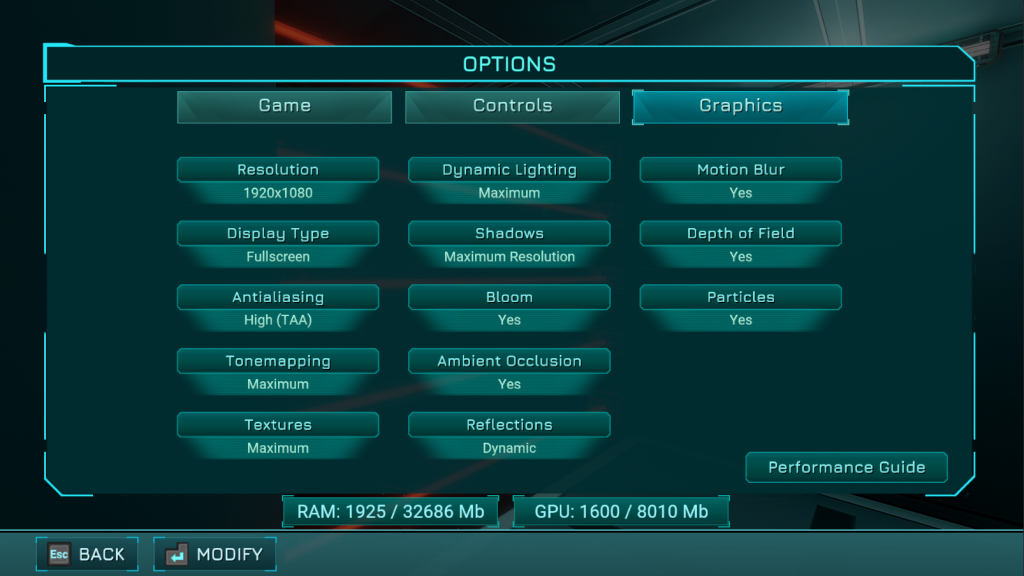 This update introduces a major visual feature called “Tonemapping”, that greatly increase the realistic feel of the game, by adjusting colors dynamically to: 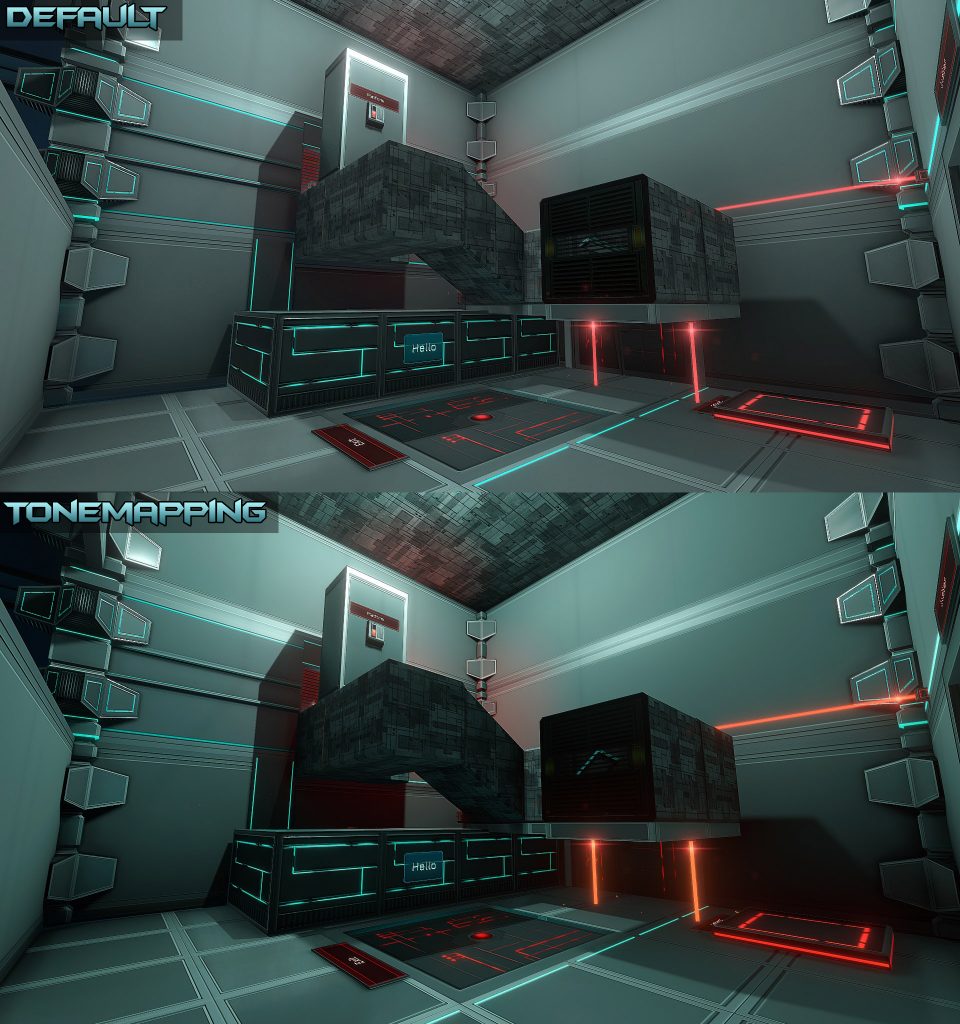 This new visual feature has 3 levels of quality, Low being set as default value:

With Tonemapping, all scenes look darker than previously; which is why many lights were added in all rooms of each level: 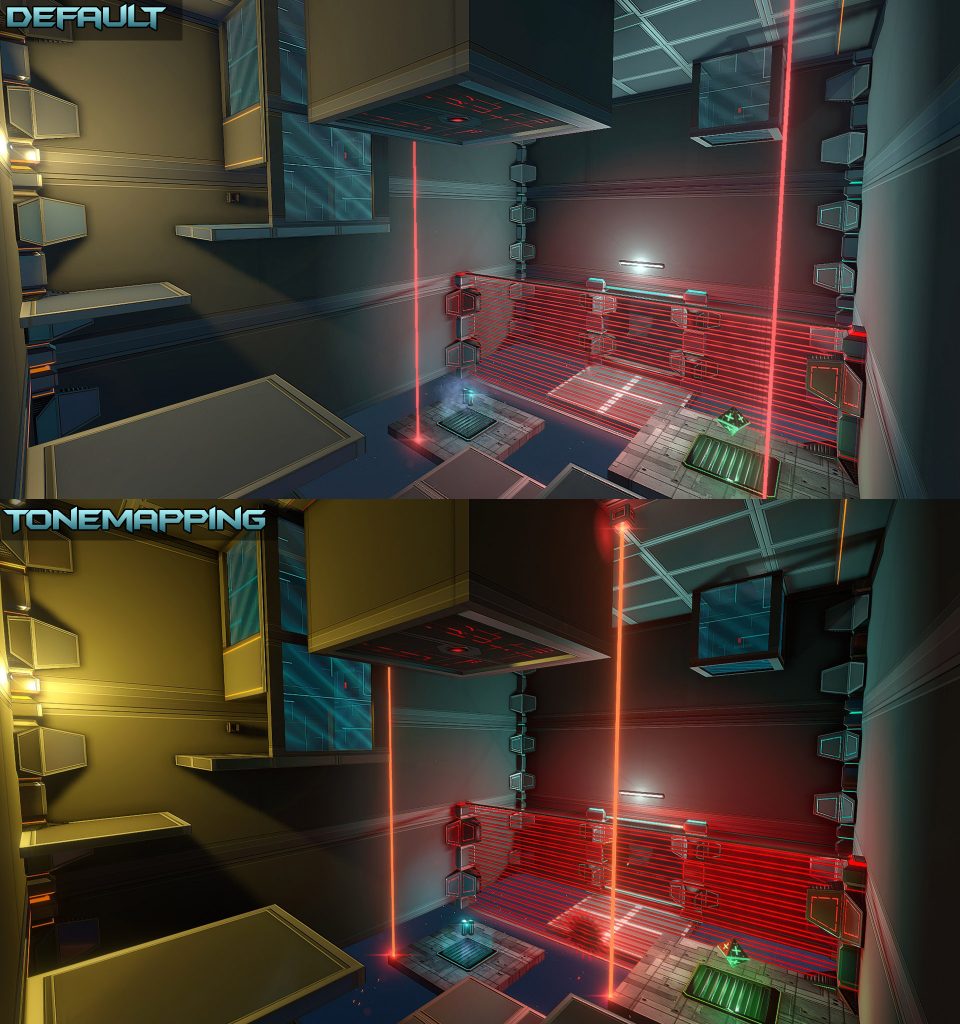 Anti-Aliasing was forced enabled the last few months due to black screen bugs and crashes the effect could cause on some hardware when disabled.

It should now be solved, and Anti-Aliasing will now be correctly enabled or disabled based on graphics settings.

In addition, instead of only having an “On or Off” toggle, you can now choose between 3 different Anti-Aliasing techniques:

Similarly to Anti-Aliasing, Motion Blur was disabled since the last few months due to black screen bugs and crashes the effect could cause on some hardware.

It should now be solved, and Motion Blur is now correctly enabled when turned on.

Each PC level now has a new, high-quality PC-exclusive skyboxes. You should see the difference 🙂

If they look blurry, please try increasing Textures quality to Maximum in the OPTIONS -> Graphics.

For now, Chapter 3 and Chapter 4 share the same sky. This will be changed in the future.

In addition to adding many new lights in all level, we have added new types of pipes in various areas of all levels! 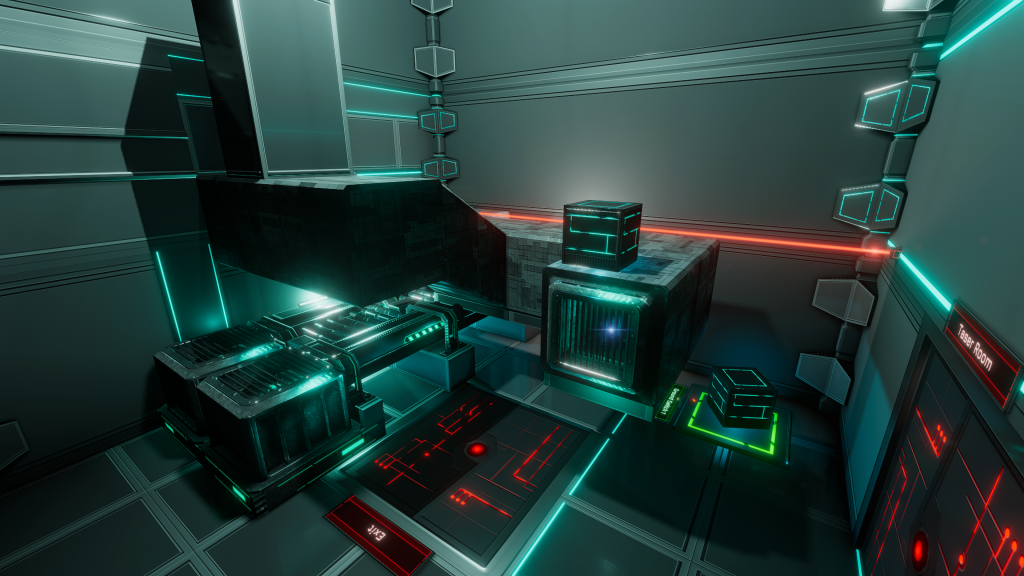 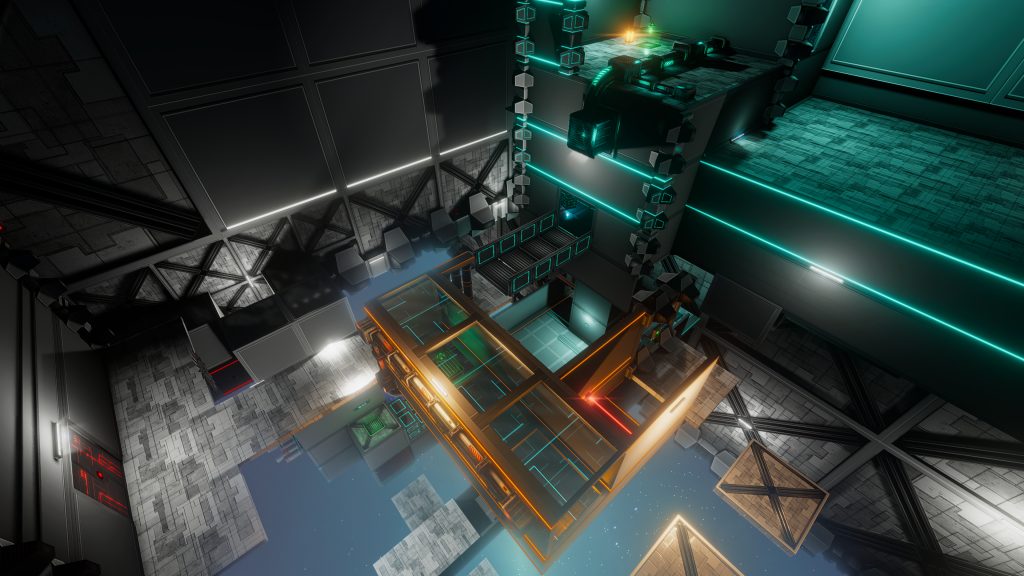 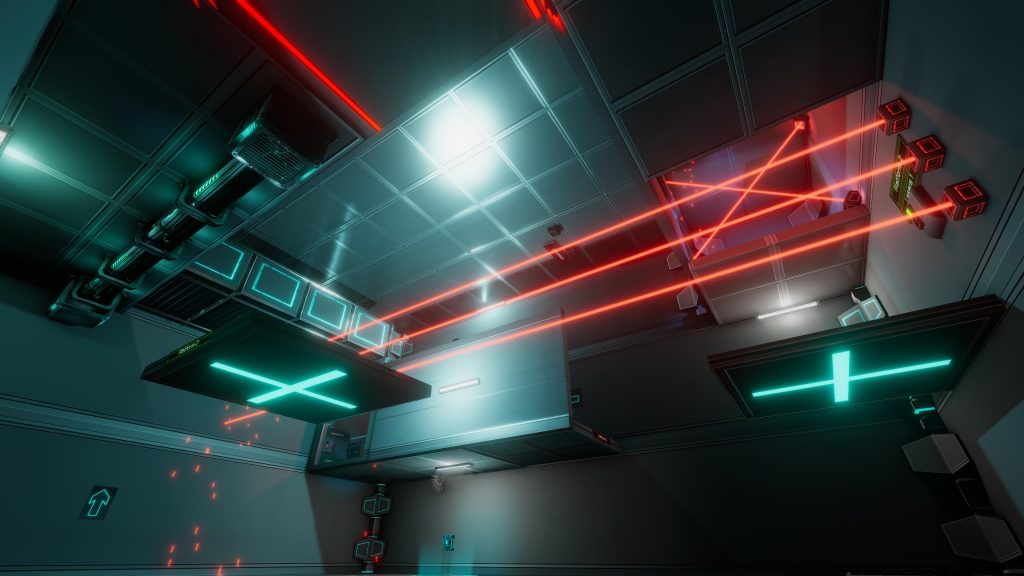 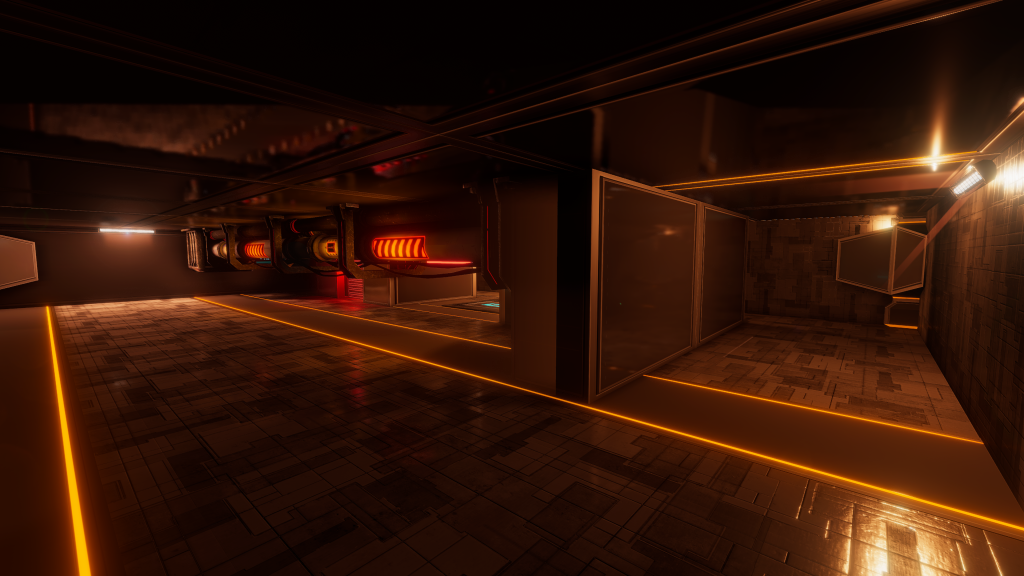 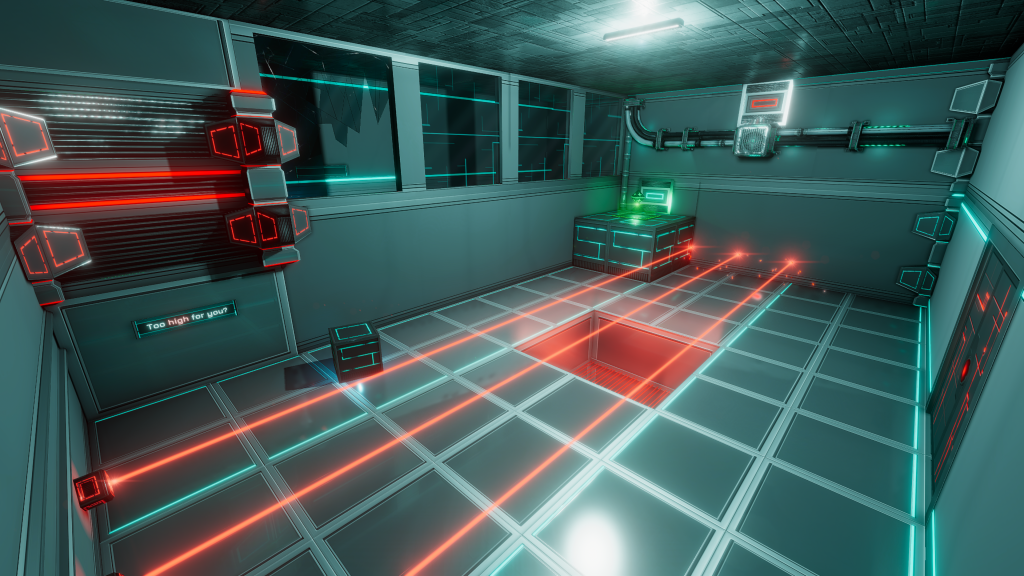 Terminals were using a simple glass 3D model since the beginning. We have created a new table and new terminal screens!

The table itself becomes Red when the player interacts with it, and will remain red if it cannot be used anymore (Upgrade already Acquired). 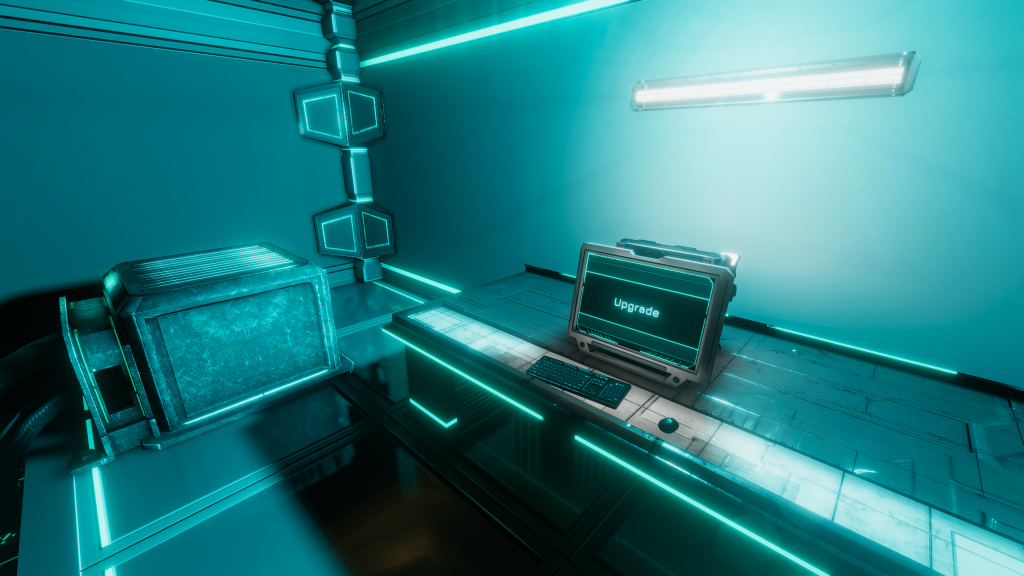 A new mechanic was introduced to the game. It can be found for the first time in Chapter 3, before entering the vertical room with lasers and large moving platforms 😉

Encryption Keys were added to the game in this update. They function like keys to open doors or activate objects. 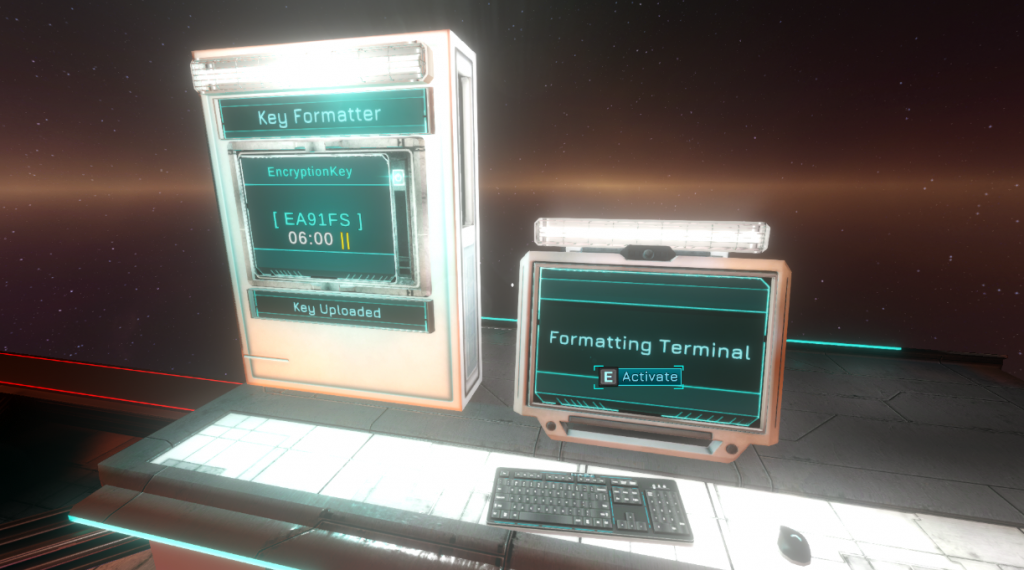 An Encryption Key can be reformatted to be assigned a different key at any Key Formatter terminal.

Once formatted, the Encryption Key will hold the specified key, for a certain duration. You’ll need to insert it to the Key Reader that requires this specific Encryption Key, within the time limit in order to activate the target Key Reader.

If you run out of time, the Key will Expire. In this case, you will need to re-upload the Encryption Key by simply re-inserting the Key in the Formatter slot. 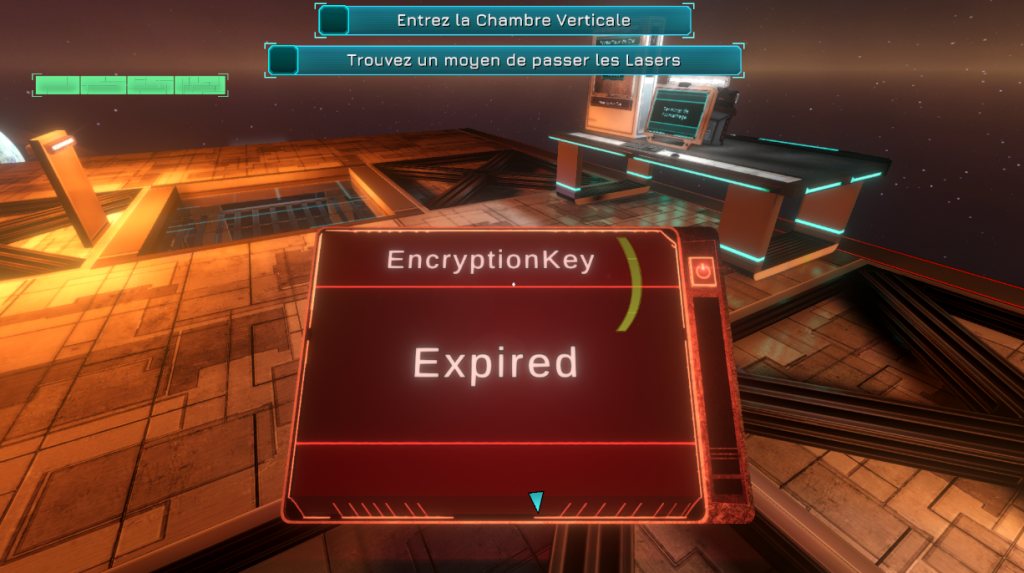 The Cube area in Chapter 3 has changed significantly! 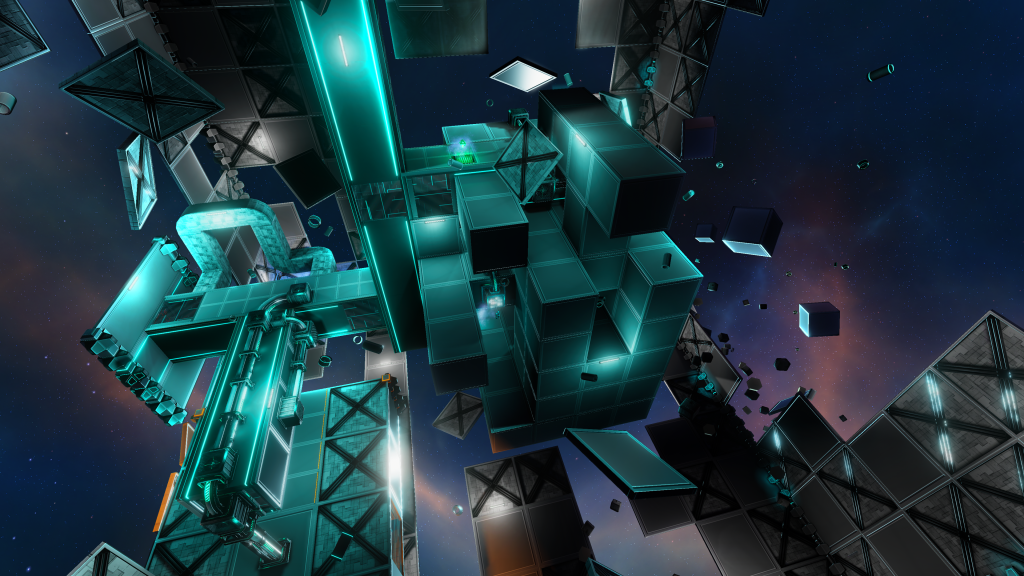 There was an area that was not really accessible previously, not long after the “large button to shoot from far away”. I recommend you take a look there now 🙂

You will now find the first accessible Encryption Key and Key Formatter of the game; it is, however, an optional one to find a Recording: 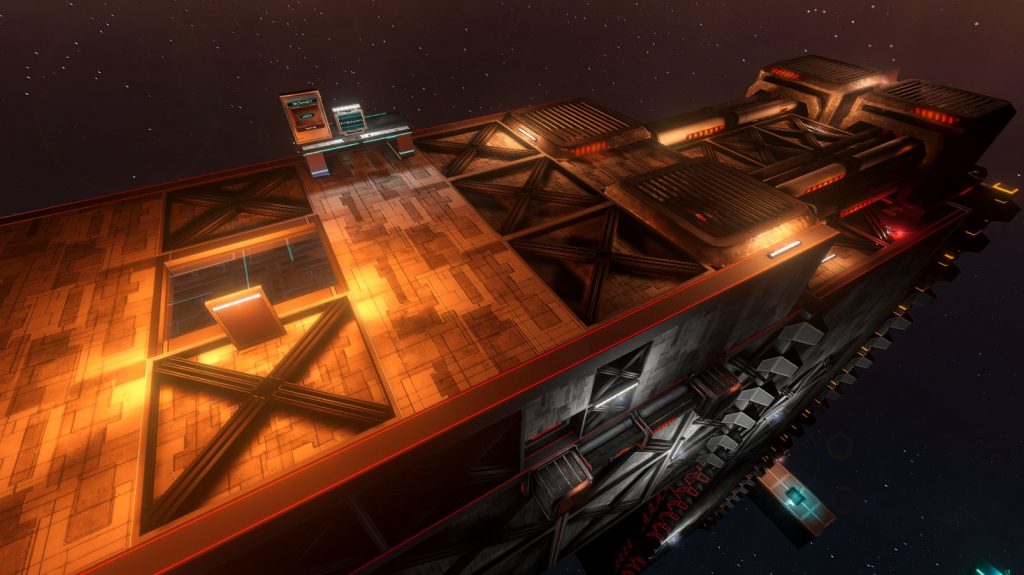 We’ve added a few rooms in the middle part of Chapter 3.

A while ago, some users could have a black screen / crashes while playing.

This was due to a Unity engine bug. In order to solve this until Unity fixed it, we had implemented a temporary home-made fix. Since then, Unity has now solved this issue in theory on their side, so we have disabled that temporary fix.

If Unity didn’t properly solve all these cases of black screen / crashes (especially on level transition), it’s possible this bug will be back on some hardware. If so, please report an in-game bug with ALT+B. To be tested!

Here’s a non-exhaustive list of other various bugs that were fixed: