A look at my time exhibiting Truck the System at Norwich Games Festival 2019. Lessons learned, trucks built and loop-the-loops looped.

I took a demo of Truck the System along to Norwich Games Festival 2019 to get some people playing and get some early feedback. It was a great experience all-round, both personally and for the development of the game. This article will go through some of the things I took away from the festival and show off some of the cool trucks that people made.

I made two tracks for the demo to give players a choice between a simple race track and a more difficult skill-based obstacle course, full of loops and jumps. Both were made in the in-game level editor, which is currently in an early usable state. You can see both of the courses below (bonus points if you recognise the real-life track which inspired the race track) 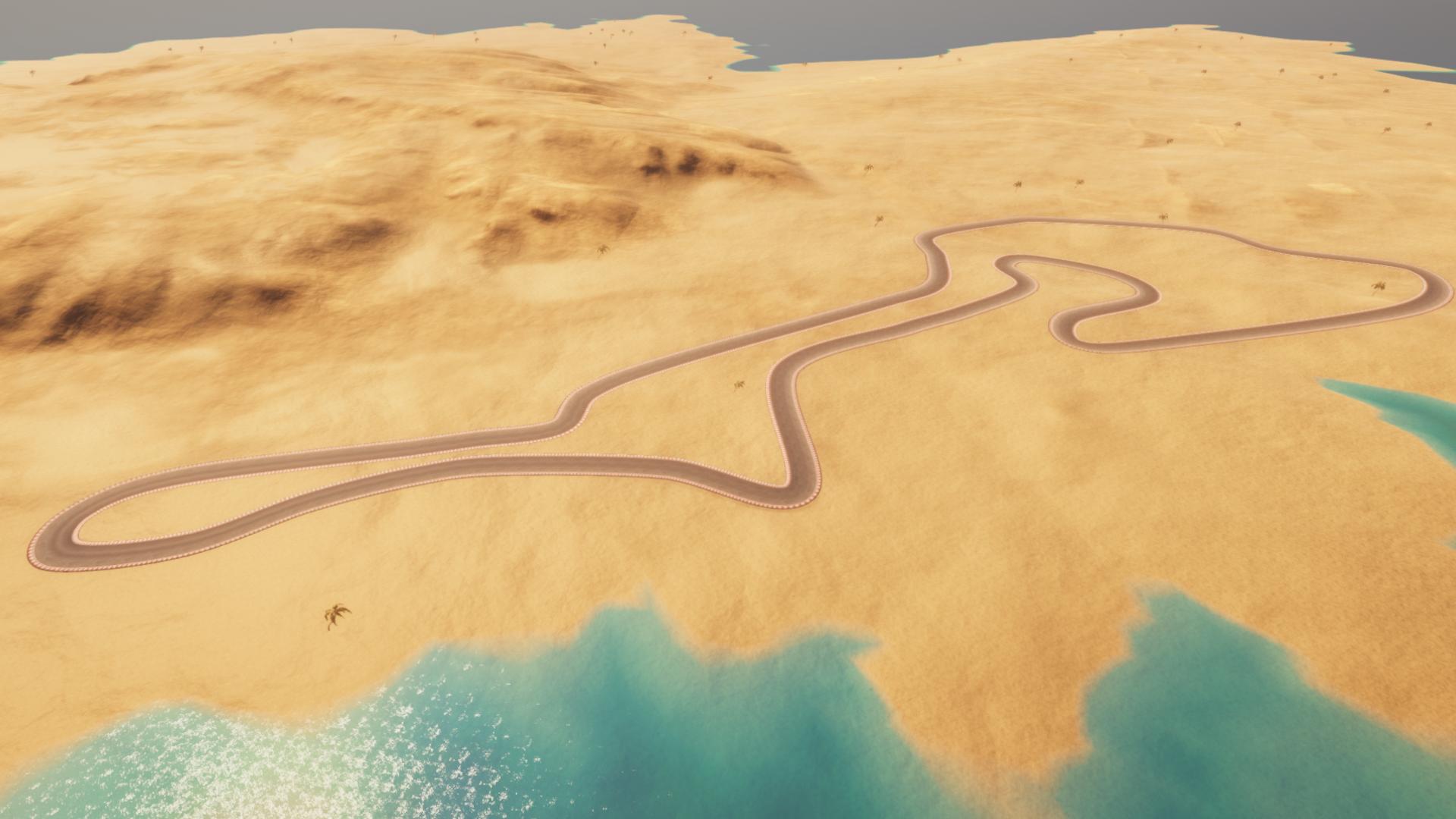 The level editor uses a spline curve based interface, which made it easy to create complex track shapes. The same interface can be used to create tube shapes, as shown below. There will be a more detailed article on the level editor in the coming weeks, so be sure to give the game a follow to stay up to date! 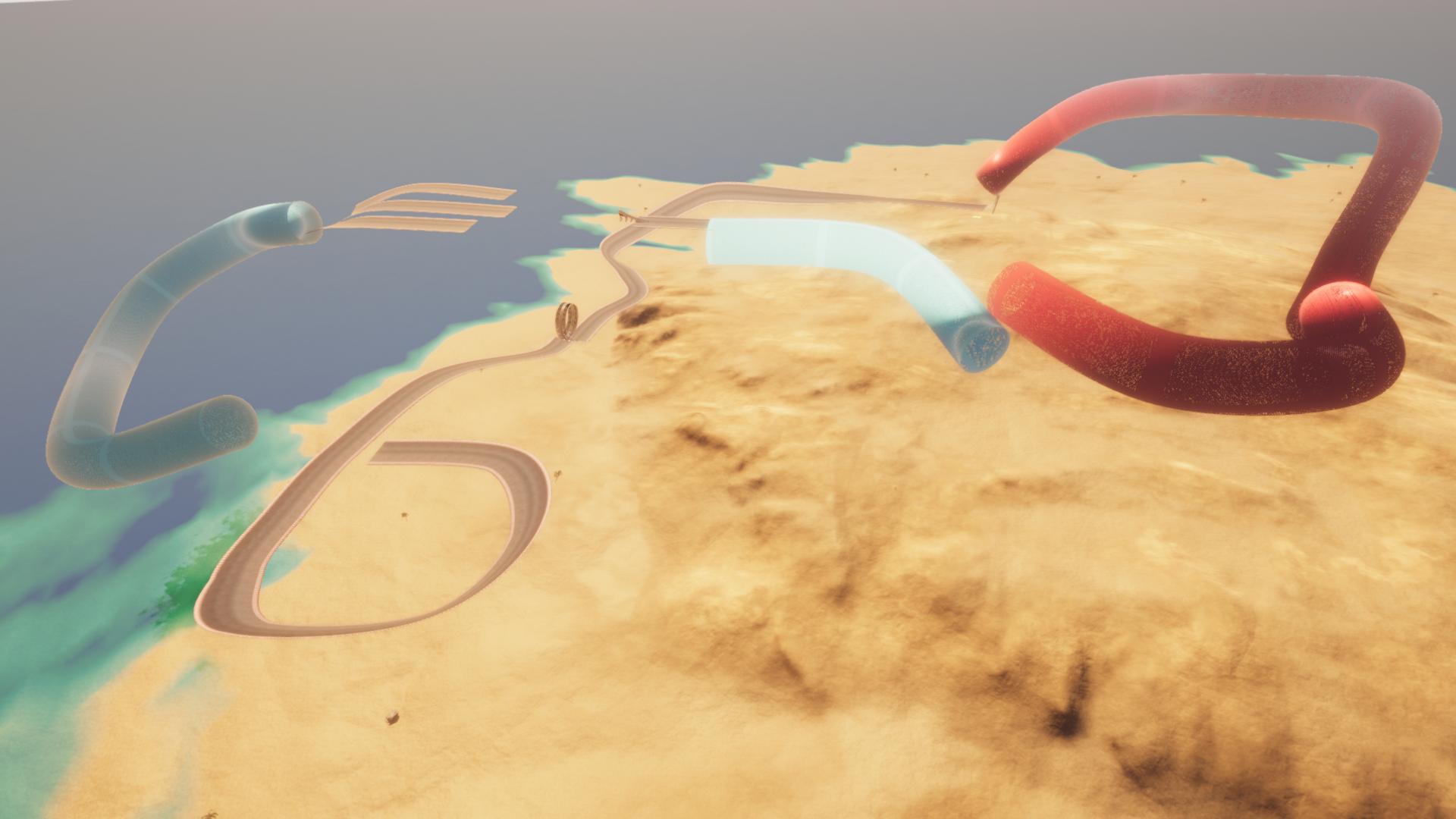 In retrospect, both maps were perhaps a little too difficult for new players, with the skill course only being finished by 5 people. The race track was a little more forgiving, with over 30 finishes. Quite a few players preferred to go off-road and hit the dunes instead, which was fun to watch. Some of the more devoted explorers even managed to drive all the way out to the end of the ocean and fall off the map into the void. Note to self: add map barriers.

They're inevitable when you're putting your early game build in the hands of brand-new players, and I found that children were especially good at finding strange bugs. Most of them were pretty boring, but I wanted to highlight this one because it took me by complete surprise. Meet the tank cannon - mini gun hybrid that one player somehow managed to create. They also called it Chungus.

Fortunately, I had enough time to fix the worst bugs on the evening of the first day. There weren't any major issues after that, which I consider to be a success.

I gave each player the choice between building their own truck and using a pre-made one. Most people were excited to build their own, and as a result nearly 100 trucks were built by players over the course of three days! I've picked some of my favourites to share today. 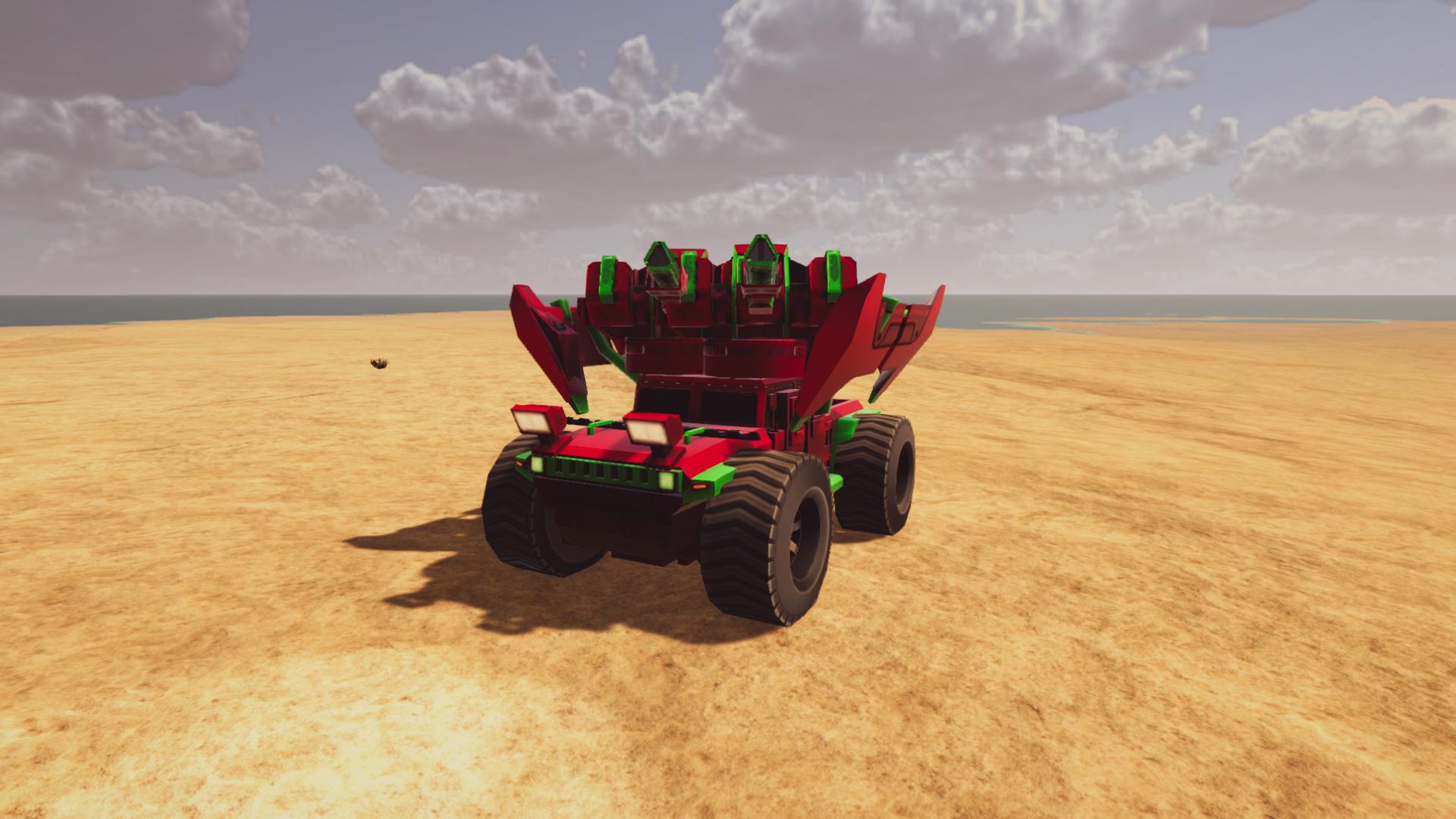 Meet "Santa Claus". I like this one because of the creative use of spoilers to create some kind of crown on the sides, which also acts as an anti-roll mechanism. Also, great name. 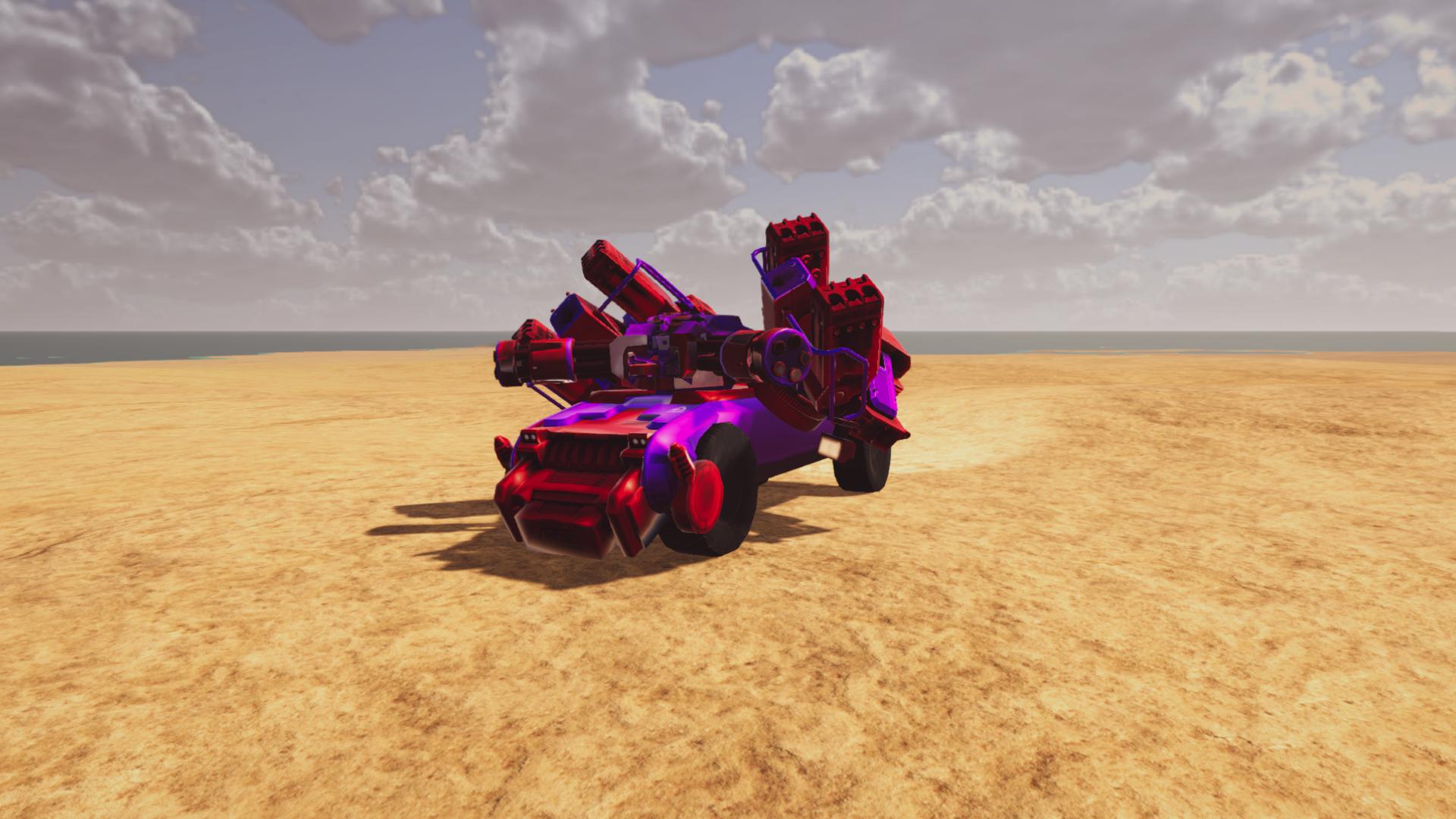 This is the aptly named "Big Truck". This one clearly wins best colour scheme, and as a bonus it's also packed with weapons. 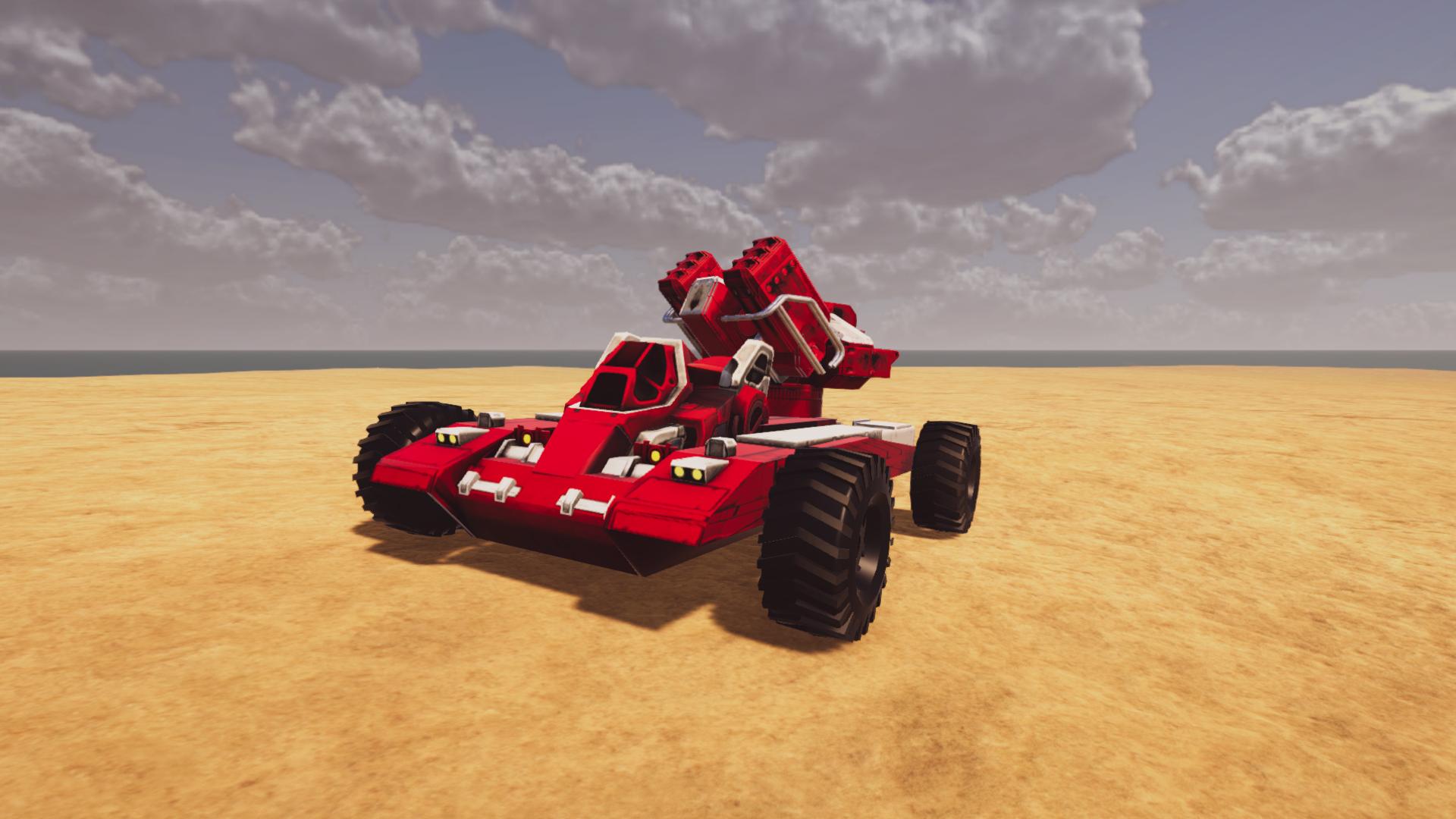 This truck was the most iterated upon during the event. It's really great to see people coming back to play again and again, ready to try their new truck ideas out. This particular player got up to version 11 of his truck - "Mudrunner".

"Weapon". I'm not sure how to explain this one. I felt like it needed a gif so you could see it in action. The player behind this truck managed to do something I'd never seen before and make some kind of mech with giant fists that can slam into the ground. It's pretty fun to use, so I'm definitely going to be considering adding more parts to support these kind of creations in future. Currently part movement is tied to the camera, so excuse the shaky cam.

So that's a quick look at my time at the Norwich Games Festival. Huge thank you to all of the players who tried the game! And apologies to any parents who had to try and pry their kids away when it was time to go! I'm planning on releasing the demo I took to the festival right here on indieDB some time in the coming weeks, so give the game a follow if you're interested in playing.