This week's screenshot shows the note intended to be shown in place of level three in the new demo: 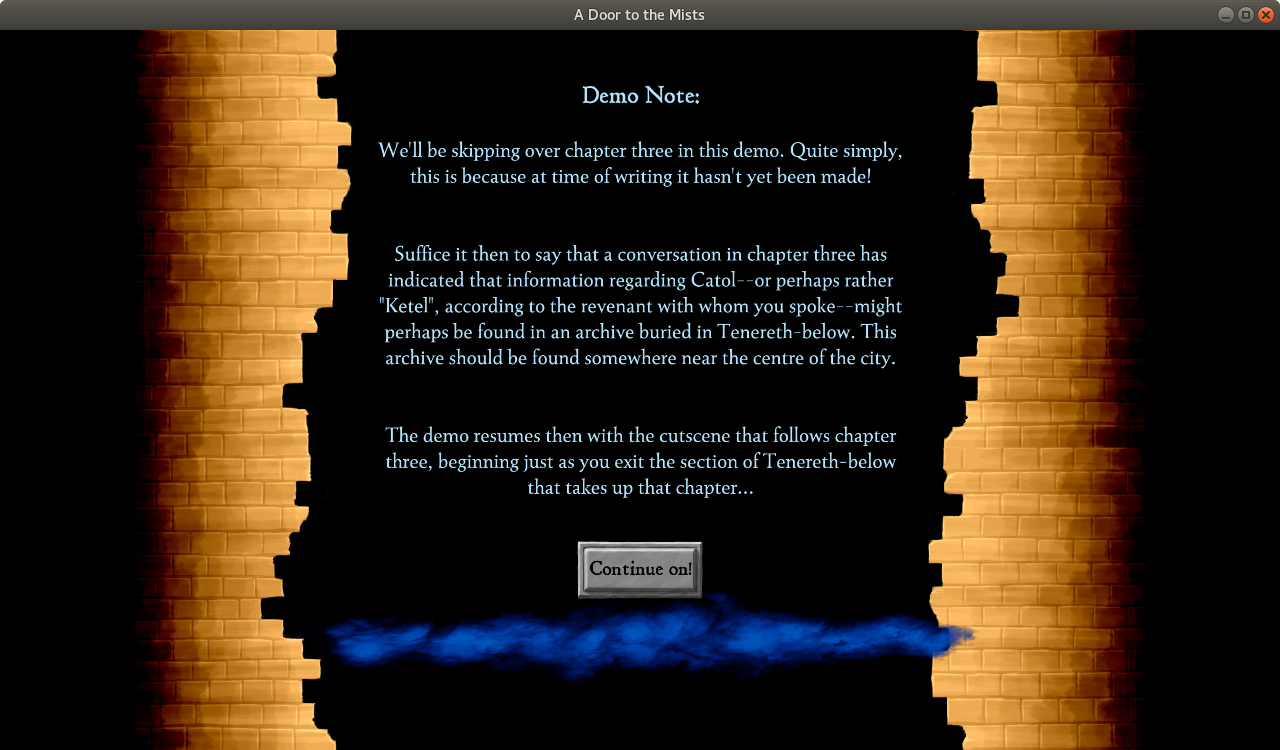 Perhaps the primary work of the week just past was in the upper puzzle of level five, with a small miscellany of other things done besides:

As shown above, the note shown in place of level three was updated in the week just past: touch-ups were made to the text, a bit of logic added, and a border placed to either side. I think that this is more or less done now, barring further touch-ups!

But, as mentioned above, the main work of the week just past was likely that which was done towards the upper-level puzzle in level five.

Some of this was fairly uninteresting: the writing of various responses for historical events discovered in the puzzle; adjustments to the position and orientation that is the end-point of the initial cutscene-mode skim through the documents; adding of a few clues to the level's clue-page to give direction here; assignment of year-ranges to each section of bookshelf; and possibly a few other things besides. 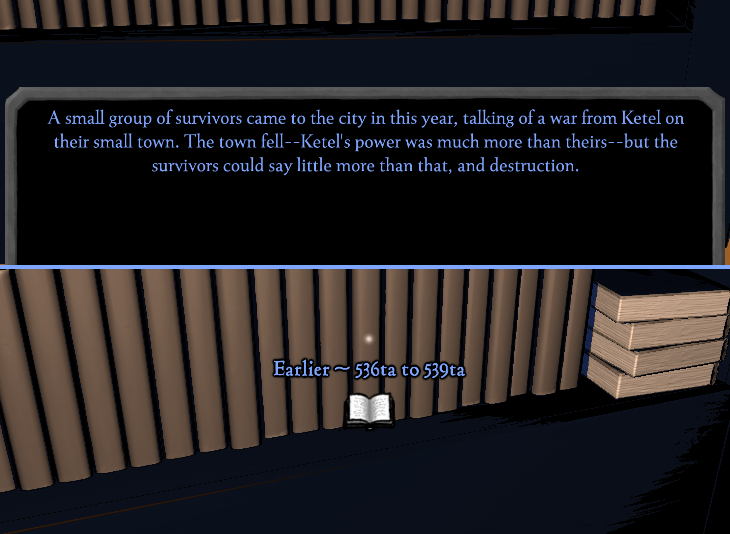 Perhaps more interesting is the structure of the puzzle itself.

I believe that I've mentioned before that I've had some uncertainty regarding this puzzle: how might I make a search through date-sorted histories engaging?

As of last week's blog-post, I had taken a simple approach, as I recall: each shelf was divided into four sections, and the player was tasked with examining a given section, determining whether the revealed information--if any--lay before the target section or after, and then moving to a new section as appropriate.

That basic premise remains, but in the week just past I realised that by itself it was just too easy to brute-force. There were, after all, only sixty-eight sections (I think that it was), leaving few enough that simply going from one end to the other wasn't overly troublesome.

At first I tried to deal with this via a simple fade-to-black, held for a few seconds, with the sounds of page-searching overlaid. This did slow things down... but still not enough, I feared. And furthermore, it wasn't terribly interesting.

I did have another idea--but I wasn't sure that it fit the game in tone. In addition, using it meant adding a new minigame-puzzle, not only late in development, but somewhat late in the experience of the game, too. Was this wise...?

But I wasn't happy with the fade-to-black, and the minigame might at least give the player something to do, and so I implemented it.

In short, this minigame presents the player with a page of miscellaneous words, and asks the player to select the one word relevant to the search. Do so correctly, and a useful response is given; otherwise, a response indicating that nothing was found is given.

There is a catch, however: there's no guarantee that a given section, and thus its associated puzzle, will contain such a relevant word: some sections just don't hold anything of interest.

It's a simple mechanic, but I'm hoping that it will engage players a bit more in the search than just clicking on sections might, and slow them down enough to disincentivise brute-forcing.

Right now the words have vertical offsets to baffle the eye a little, making it harder to skim over the lines; I'm not yet confident of keeping this.

Furthermore, I currently have it in mind to add an accessibility mode that reduces the number of words and spaces them out further. 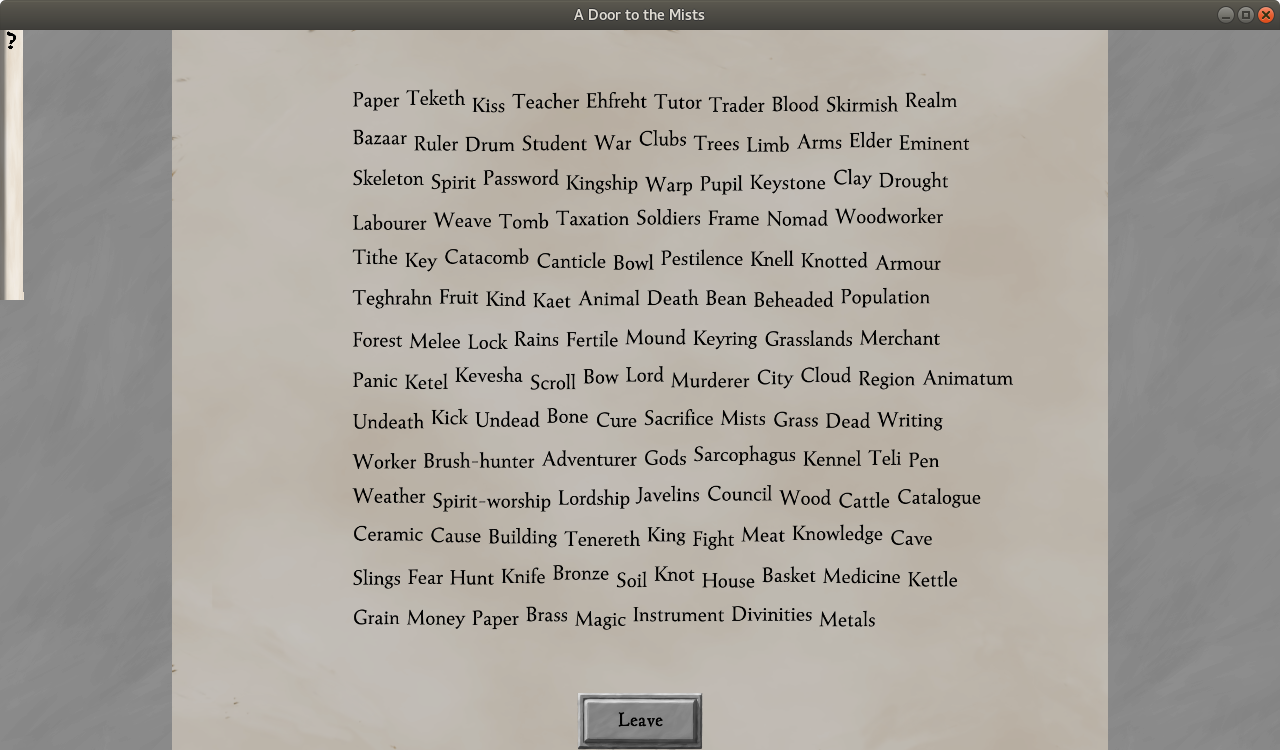 In the week just past I also added the inventory item that's gained at the end of this level: a date torn from a history-record, associated with an important event in the timeline of the city Ketel/Catol. I don't intend to show that here, however, as it's a bit of a spoiler for the upper-level puzzle!

And finally, a few other things were done that don't seem worth detailing here!