Posted by CorrectureGames on Jan 6th, 2019

Hello!
It's been quite a productive week. I'm about to push version 0.44. This is the full extent of these two updates:

New features:
Services implemented. Commercial zones provide services demanded by residential zones and some public amenities. Naturally, these cannot be traded like normal goods and cannot be stored.
Conglomerates make demands if policy targeted at them is too strict (high taxes for instance). Only unhappy conglomerates will make demands, so ensuring you don’t demolish their buildings and keeping taxes fair will make them less inclined to make demands. If you decline a demand, you may run the risk of a short period of lower production of goods or services. The rate of lower production and the duration depends on how unhappy the conglomerate making the demand is.
Bribes have been implemented. Conglomerates will try to give you things in return for changes to policy they dislike.
Property tax has been implemented. This puts a percentage tax on the value of conglomerate buildings. As your city grows, taxing property can amount to a fairly substantial source of income. But it’s also a source of discontent among your conglomerates.
Conglomerate happiness now affected by policy and dependant on conglomerate memory.
Conglerate information panel (local economy) available.Services icon added to resource panel.
Corrections center building added.
Safety indicator added to city stats panel.
First iteration of crime added. Crime currently doesn’t affect any values around the city, but has been made visible to the player via the city stats panel. Crime is (currently) managed with police departments and corrections centers and calculated on a citywide basis.
Conglomerate happiness now indirectly affected by business cycle, wage levels and unemployment. This will be developed more later on.

Changed UI/UX:
UI adapted to allow 16:10 aspect ratio. A minor issue with positioning of hide/reveal side panel arrows remains, as does a positioning issue with the message panel at the bottom of the screen.
Corrected a discrepancy between actual values and displayed values in UI.
Added tool tips to building info panel.
Moved scrool wheel from zoom to translate (scrolling moves camera forward/backward). Zoom function on keys Z and X moves camera anchor and changes the rotation center.

Glitches/Bugs/Poor optimizations fixed:
Further vehicle code optimizations and refactored code.
Fixed bug in text display for health and environment indicators in city stat panel. Text display would sometimes be incorrect.
Fixed a bug where sky rotation change when switching to day/night only mode.
The sound trigger code was incredibly inefficienct, especially when the camera was close to many buildings. This was the source of significant slowdowns. Now, only one building will be fetched at any time using a different (and faster) method.
Sped up performance of calculation thread.
(the two above mentioned fixes lower the fps-drop when running the game in 4x or 8x speeds)
Fixed faulty calculation of unemployment insurance cost.
Health values were persisting over calculations meaning ever improving health. Corrected by value not persisting over calculations.
UI for trades, bonds and offers update when panels are opened. Before they updated regardsless of whether the windows were open.
Fixed glitch in concrete foundation manager causing a null.

Other changes:
Changed calculation of efficiency when missing resources. Before, missing one out of three resources (for example) would cut 1/3 of efficiency. Now completely missing a resource will set effieincy to 0.
Fixed overlapping buttons in options panel.
Fix for density shader glitch.

New issues/Known issues (an outtake):
Minor issues with menu in 16:10 aspect ratio as mentioned above.

Some of the bigger changes this time around is the addition of services as a resource. Commercial buildings not only provide work places for your citizens, they are also more valuable for conglomerates than residential and industrial property types. As such, they also add more income if you tax property. Aside from that, they produce services which are consumed around your city. Currently, only residences consume services, but in the next update, some other buildings will be added as consumers of services as well. In the next update the rate of service production will be affected by commercial taxes as well.

A first iteration of crime has been implemented as well. Crime currently doesn't affect anything in the city, but in future releases crime will affect property values, production and the rate of construction for conglomerates. It will also affect health levels marginally. Along with the addition of crime, comes the corrections center building: 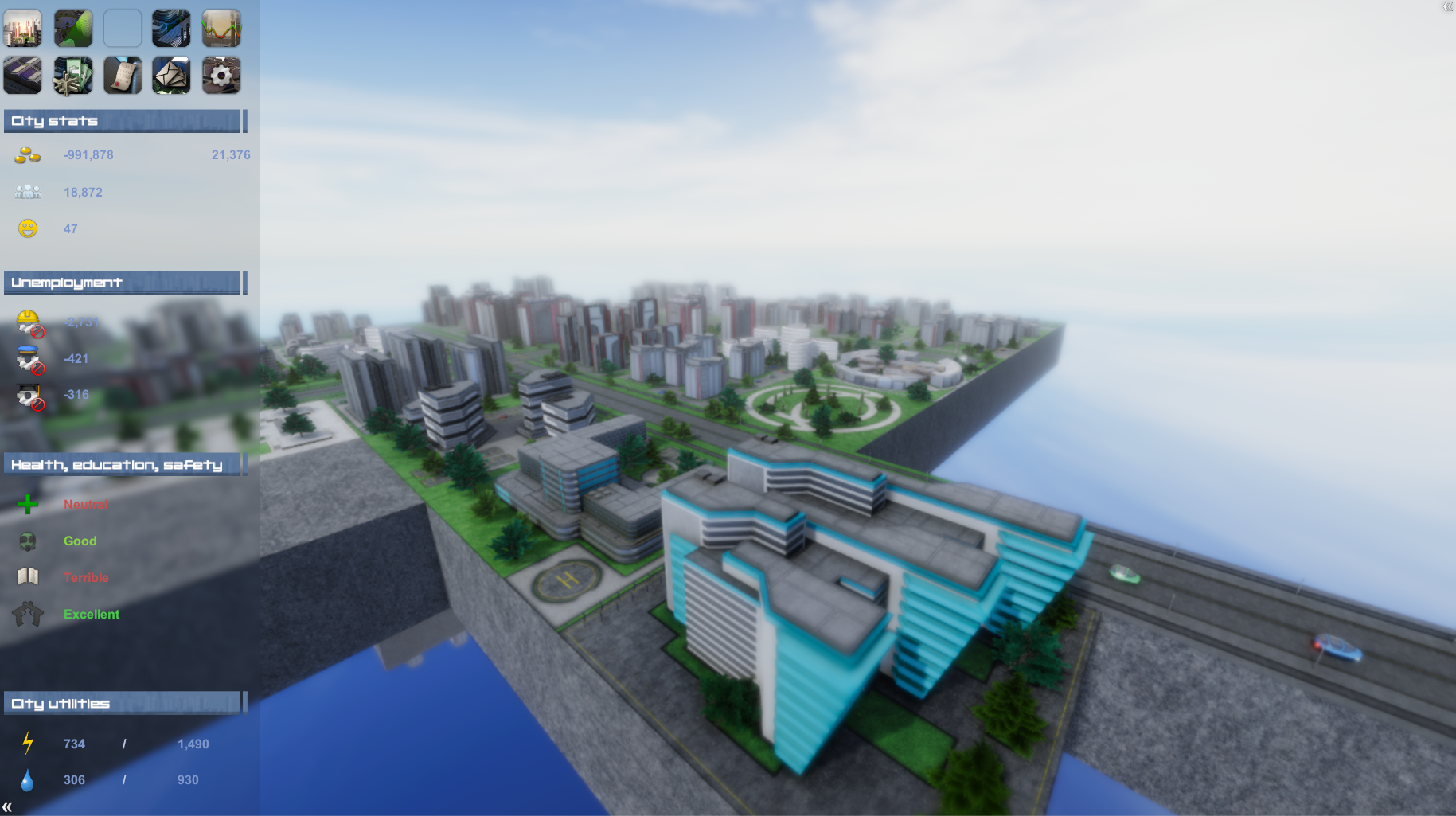 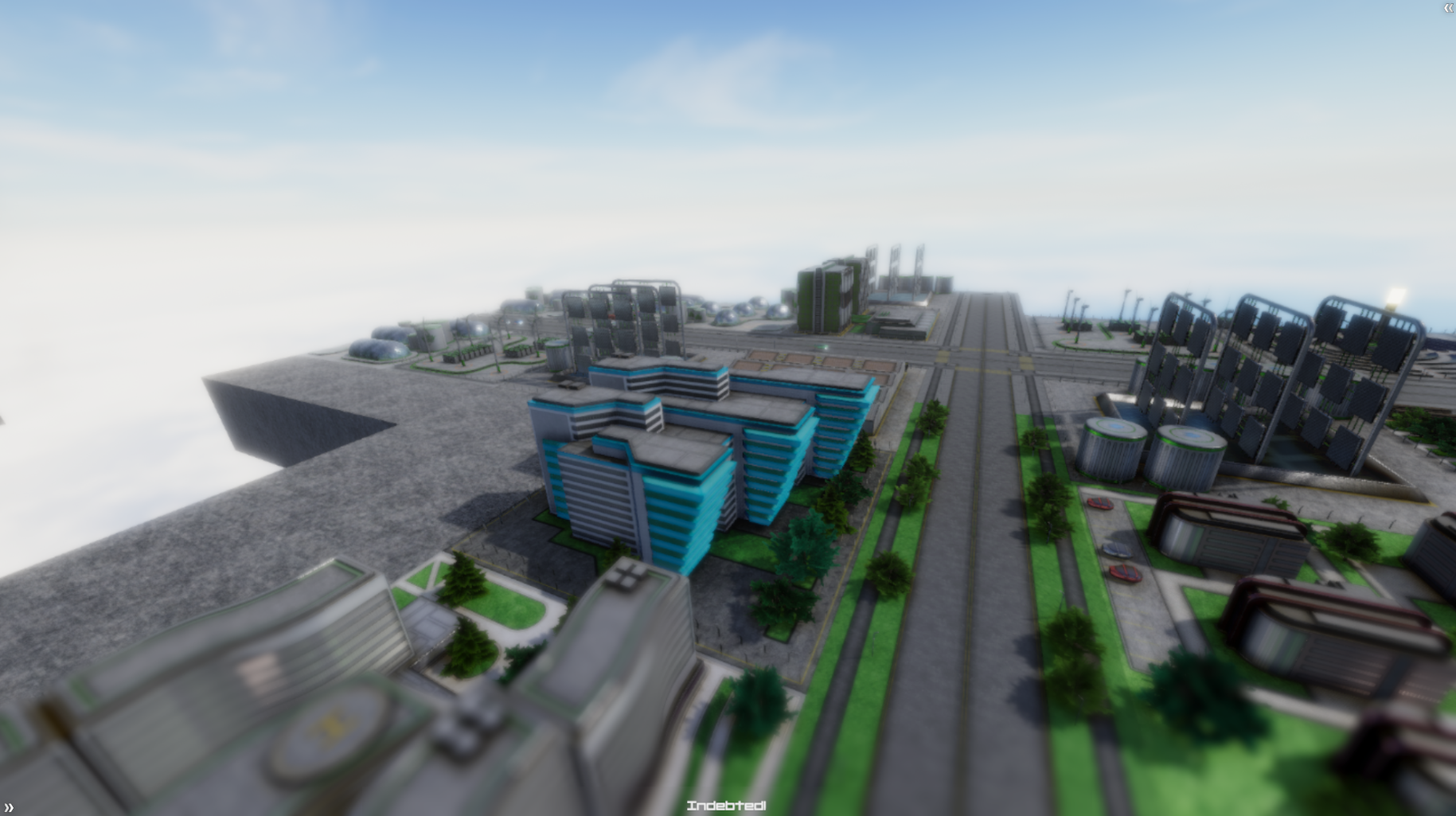 This, together with the police department, combats crime in the city. Crime levels grow linearly with the population, but also exponentially from unemployment. Other factors will also be added in future updates.

Conglomerates can now be viewed in the first iteration of the local economy panel. Here you'll be able to view the currently building count and value of each conglomerate, as well as variables such as happiness, patience and memory. Patience and memory are tied together with the ceo of the conglomerate, and since this position changes over time, so do these variables. The conglomerate happiness on the other hand, depends on how well they feel things are working. High tax rates will drop their happiness, while good cooperation and fortunate global economy will raise their happiness. 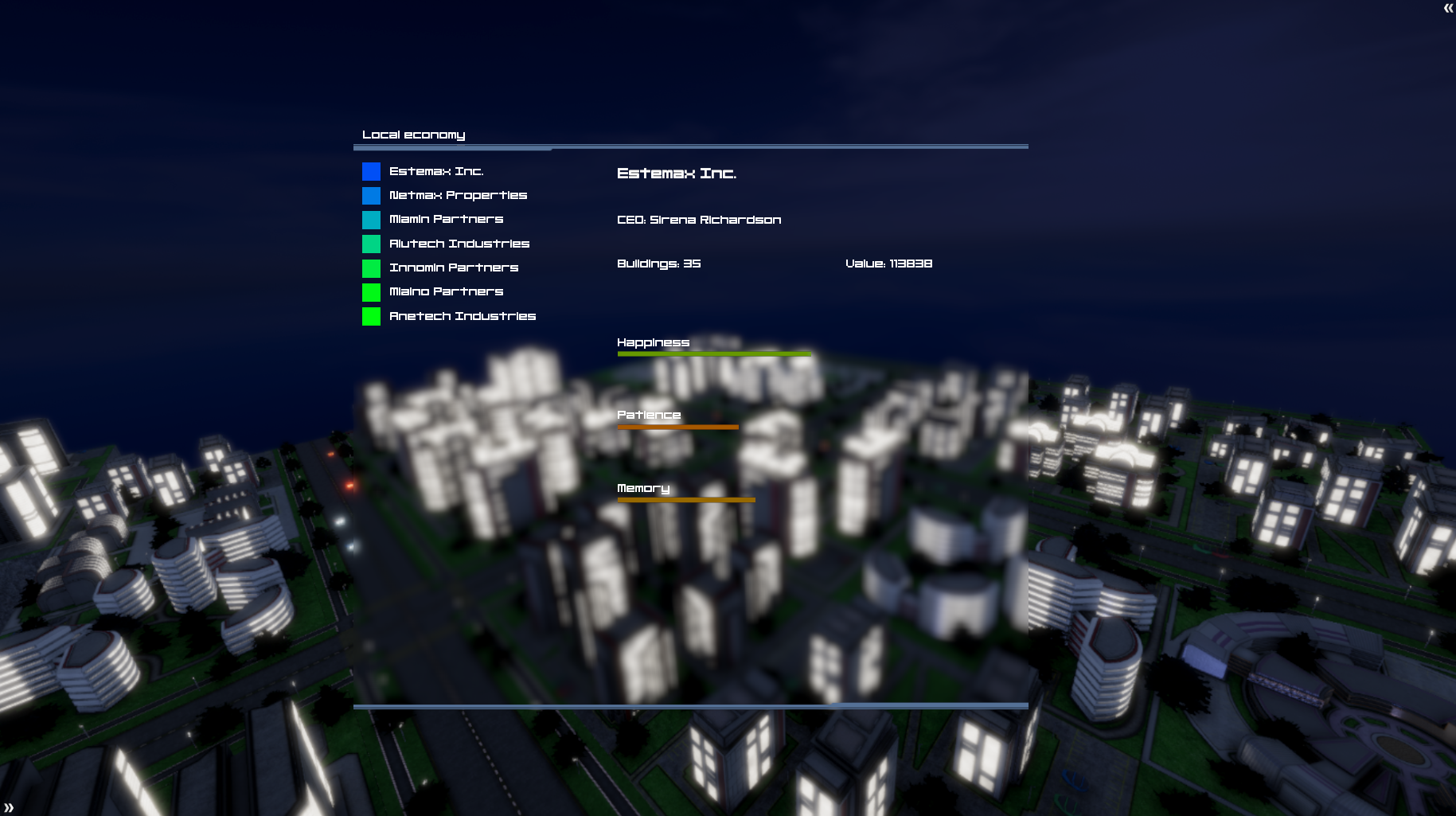 The last offertype has also been added - the bribe. Conglomerates will from time to time attempt to bribe you into changing policy they dislike. Unlike demands, bribes can occur even when conglomerates are happy with the current levels of taxes, but want you to lower them further. Currently, accepting bribes do no harm, but the idea is that this will lower happiness for a brief moment and increase the base line crime rate (setting a bad precedent for corruption). 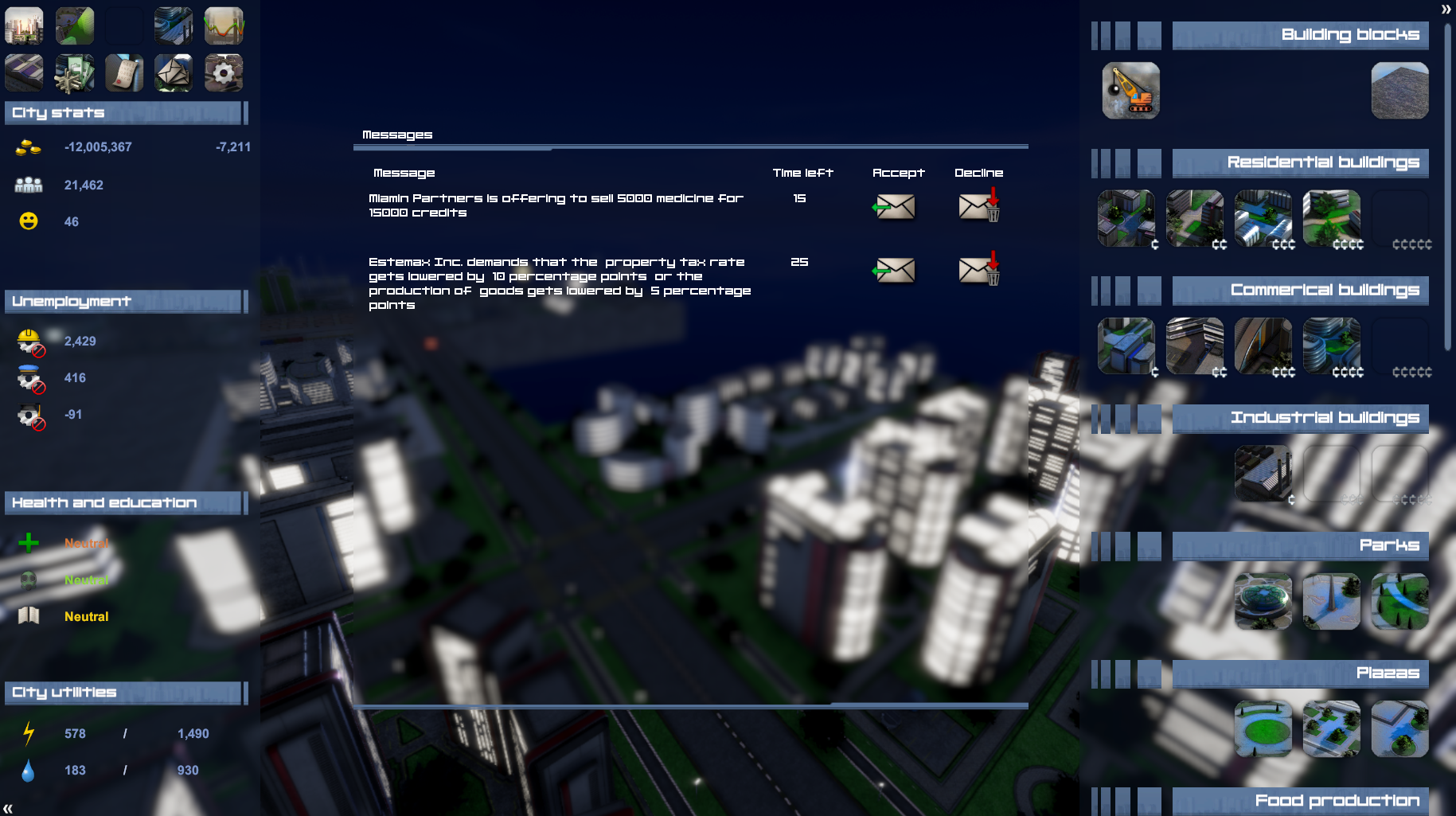 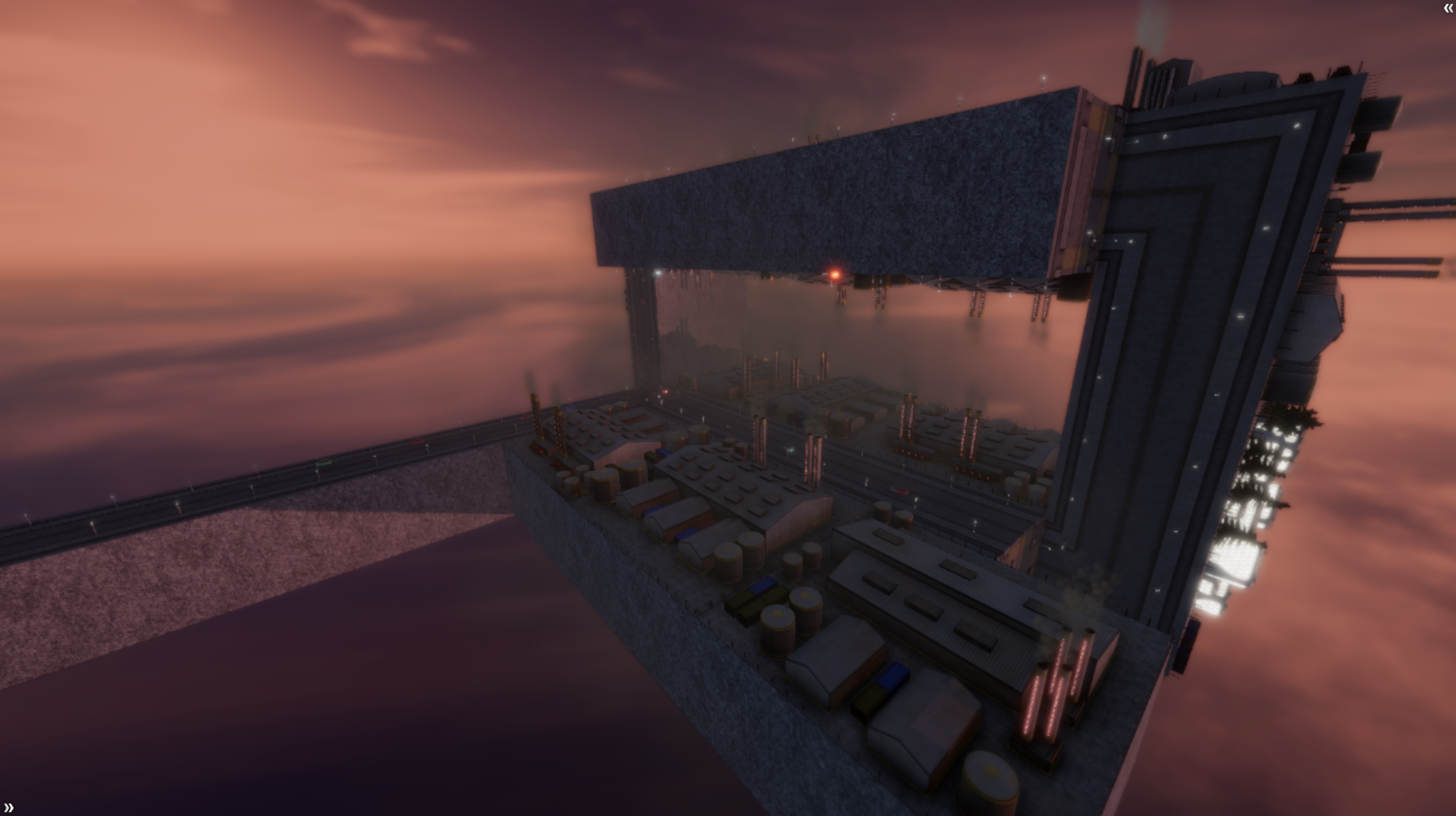 Next week I will push to finish up the residential and commercial tiers completely and continue work on the budget panel. I'm also finishing up text documentation so that I can start sending out all text elements to translators.

That's it for this time!