Another in-depth article about the game's current plans and future changes to the mechanics.

Before we begin, special thanks goes out to Neo Tanner who has recently checked out my game.

You can check out his video here:

The beta is still available and its really important to get feedback on it as there are going to be major, and I mean MAJOR, changes to the game coming next year. So if have yet to play it, you may get it at the itch.io site:

So what are these big changes? As mentioned in the last post, we are overhauling everything: graphics, game mechanics, and adding more features! So let's get down to it.

The first major change that I just recently decided on is the change in orientation. The view is going to transform from a horizontal orientation to a vertical one because the game has changed so far from its original vision that the extra space is no longer needed. With a vertical view, the game will also utilize larger sprites, meaning more detail. The sprites are already large in-game but lose detail due to the horizontal view. With a vertical orientation, the sprites will be seen in all its intended glory.

With that settled, the mechanics are next. After seeing the video, I realized that people will play the game differently than what I was expecting, with some people playing it more defensive, i.e. playing it safe. Not to mention when playing it myself, I felt something was missing because the game felt a bit stale after playing it for a while. At first, I thought it was because this beta was limiting in features but I have a feeling the game is too slow paced and needs more options of play. Thus, after much thought, I decided to implement three modes of play:

1. Power type: Pretty much what the beta offers, quick but powerful strikes and devastating charged attacks.

2. Speed type: Combo-centric attacks. Very quick, capable of being chained, but are also weak and drains your stamina quickly. This mode was thought of when I believed the game needed to be faster paced.

3. Instinct type: Aimed for more safer play. This mode has automatic actions centered on defense. Moves are canceled automatically when your character is in danger, dodging is automatic by simply holding down the dodge button, and charging attacks are optimized for speed rather than power. The caveat to this mode is that your stamina recovers slower than any other mode, all automatic moves will eat stamina, and the automated defense does not work when you are tired.

However, I do worry that this may just be too much for a game that I intend to be pick-up and play. I'll have to figure out how to make all this newbie friendly because I do believe that letting the player have a choice in play style is better than giving them a default single option but overwhelming them will definitely not help.

The last task I am working on is planning how the game will flow. Sometime in the future, there will be an actual proper demo so I have to plan ahead to get an idea of what I want it to look. One way to do this is with a flow chart. There's this great program called Twine and it's mostly used for text adventure, but I found it good enough to create a plan on how my game is going to flow from the start screen all the way to the game's ending. 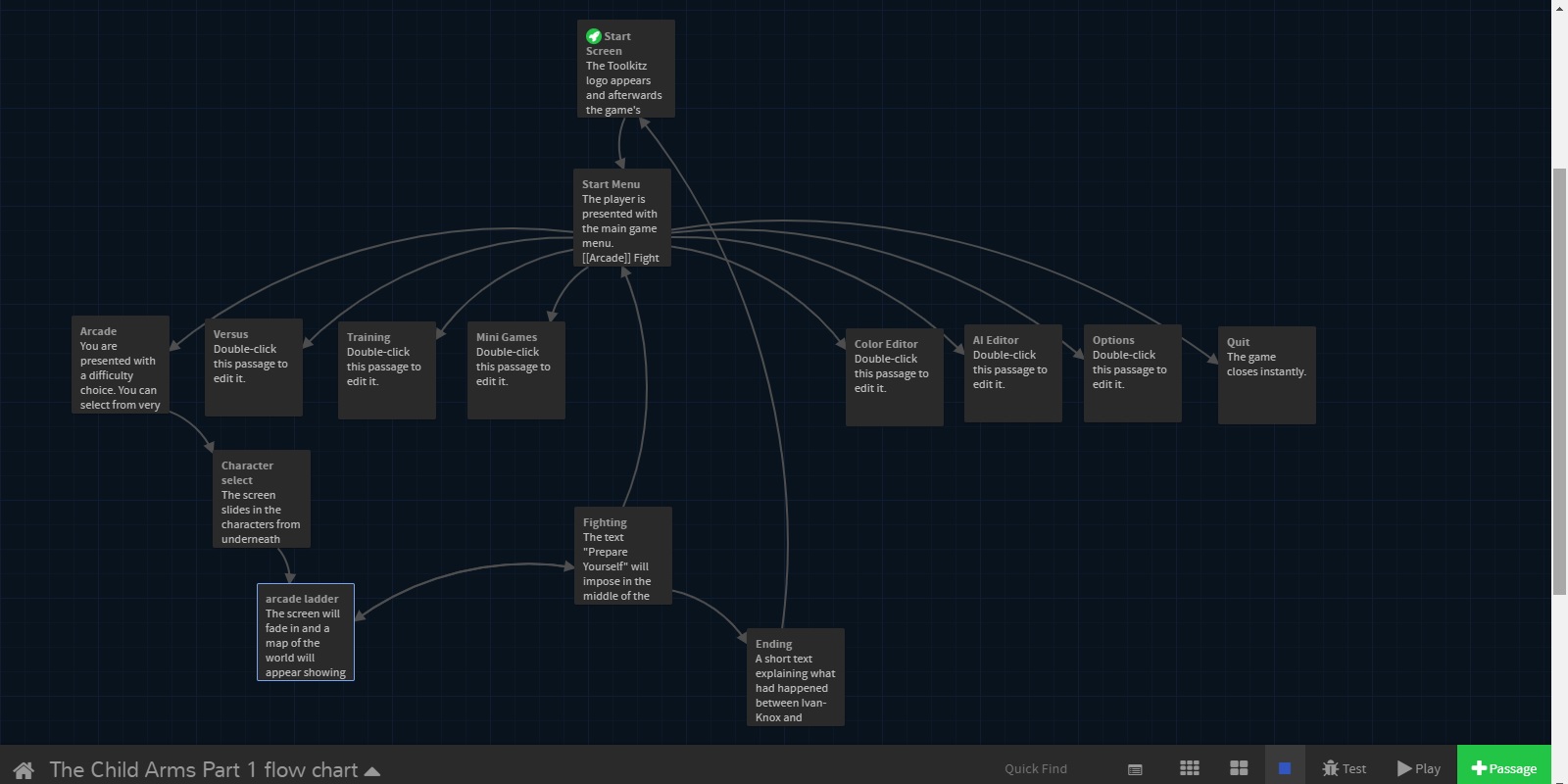 Does this count as a spoiler?

Thus, when the game begins development proper, I will have a better idea of what to expect.

Phew, that's quite a lot to talk about. I worry that all this block of text may go over people's heads, but I figured that I'm probably posting these for myself, as a way to look back at the project and how it all formed. Of course, I do hope that people will also enjoy the making of this game and if you wish to be a part of it, you can do so by checking out the game's beta right here:

And to be updated on the game on a regular basis, you can check out the following social sites.