Kopter's been working really hard to bring you these brand new weapons (I helped out a bit too!). It's a huge step up from those old placeholder guns. Really starting to shed that cheap indie look.

The weapon animations might look a bit familiar, Kopter's worked on first person animations in some of your favourite AAA games.

Still WIP so expect a lot of improvements soon! As we start filling in for the old placeholders, expect a similar upgrade in quality in basically every other part of the game :)

In other news, still making steady progress towards a new demo this year - expect better visuals, tons of bug fixes, tons of new content among many other cool things!

Here's a Terminator inspired video showing off the new guns!

Follow us Discord or social media for updates, especially about the new free demo coming up later this year. 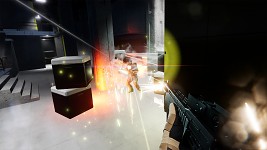 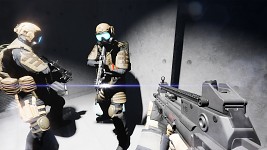 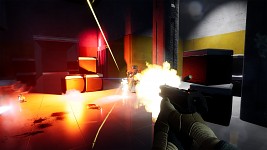 You got yourself a buyer with that showing. :)

This immediately reminded me of F.E.A.R, which is fantastic. I've been chasing the visceral highs that game invoked for years now.

Looks cool, the way of how weapons feel reminds me both first Crysis and F.E.A.R. Also about weapons, now it's pretty basic loadout, pistol, shotgun, assault rifle, grenades and mini gun if I recall correctly, interesting do you have plans for adding more weapons? As suggestion I think is flamethrower or M32 is good idea, or maybe some energy weapons, I liked how they was made in Crysis and F.E.A.R, where they looks "realistic" so they fit fine with rest of firearm arsenal and still have unique looks and mechanics, how they work especially in fear, with its plasma gun which burn enemies into skeletons or laser gun which leave really neat trails on walls and such :)

Amazing job on the weapon design, not only do they look great but they look powerful and satisfying to use.

I refuse to believe this is Indie, the graphics are just SO GOOD!