We showcase the guards' high poly model, along with tales of the hardships we faced. And, of course, there's another time-lapse!

Posted by LittleSpiritStudios on Jul 20th, 2021

As we mentioned on our last update, after finishing Aelizia's high poly model, we felt it was important to put the main character's modelling on standby and move on to the guards' 3D modelling. We believed this would not only help to ensure an overall style coherence between the two, but also keep the memory fresh and aware of all the steps that needed to be followed and in which order.

Like with Aelizia, the first part of the process was the blocking stage, that is, the creation of a blockout of the character with simple geometry. This part was harder and more time-consuming than that of Aelizia's blockout, due to the many parts that compose the guards' armour. However, we were very pleased with the outcome, and it ended up being a very faithful representation of the result achieved in the model sheet.

After that, it was time for smoothing and sculpting. Since this was only our second time in Blender, there are still many things we don't know how to do, and things take a bit longer than when we use Maya. For example, at first the Blender's mirror option wasn't working correctly, and we had to resort to other means to create symmetry, making the whole process take even longer. However, after a while, we discovered that this problem had an easy solution: we just had to change the pivot's position and we got the symmetry to work as intended again!

So, Joana soldiered on as best she could, but, unfortunately, the biggest hassle had yet to come. Sculpting the helmet, with its combinations of soft and hard parts, was a nightmare, and you can see for yourself in this week's time-lapse:

As you probably noticed, unfortunately the helmet's blockout wasn't done in the best way to facilitate the sculpting, so the general base shape had to be remade during the sculpting, that is, cutting the holes, correcting the general shapes and dimensions, etc.

Also, the more polygons in a mesh, the harder it is to keep things straight. Joana treaded the fine line between reducing the number of polygons and later increasing them again to make things smoother and flatter, and overall had difficulty in achieving the result she wanted. We believe that in the low poly version, due to the lower number of tris, the helmet will be straighter, but still have a dented/used/old look.

Regardless of the hardships, Joana made it trough, and the guards' high poly model is finished! We might change some details before the retopology, but, for now, here it is, in all its glory:

Like with Aelizia, to better showcase the modelling process, here they are, side by side: first the blockout, then the high poly model. Once again, we wanted to represent a semi-realistic style, combining realistic and stylized elements to produce an aesthetically-pleasing model without too much focus on the realistic details. Since the guards are, for the most part, composed of hard metal parts, the hardest part was combining the organic with the inorganic, that is, all the armour parts! Once again, we compromised, adding a bit of detail here and there, but without exaggeration. What do you think of the result? 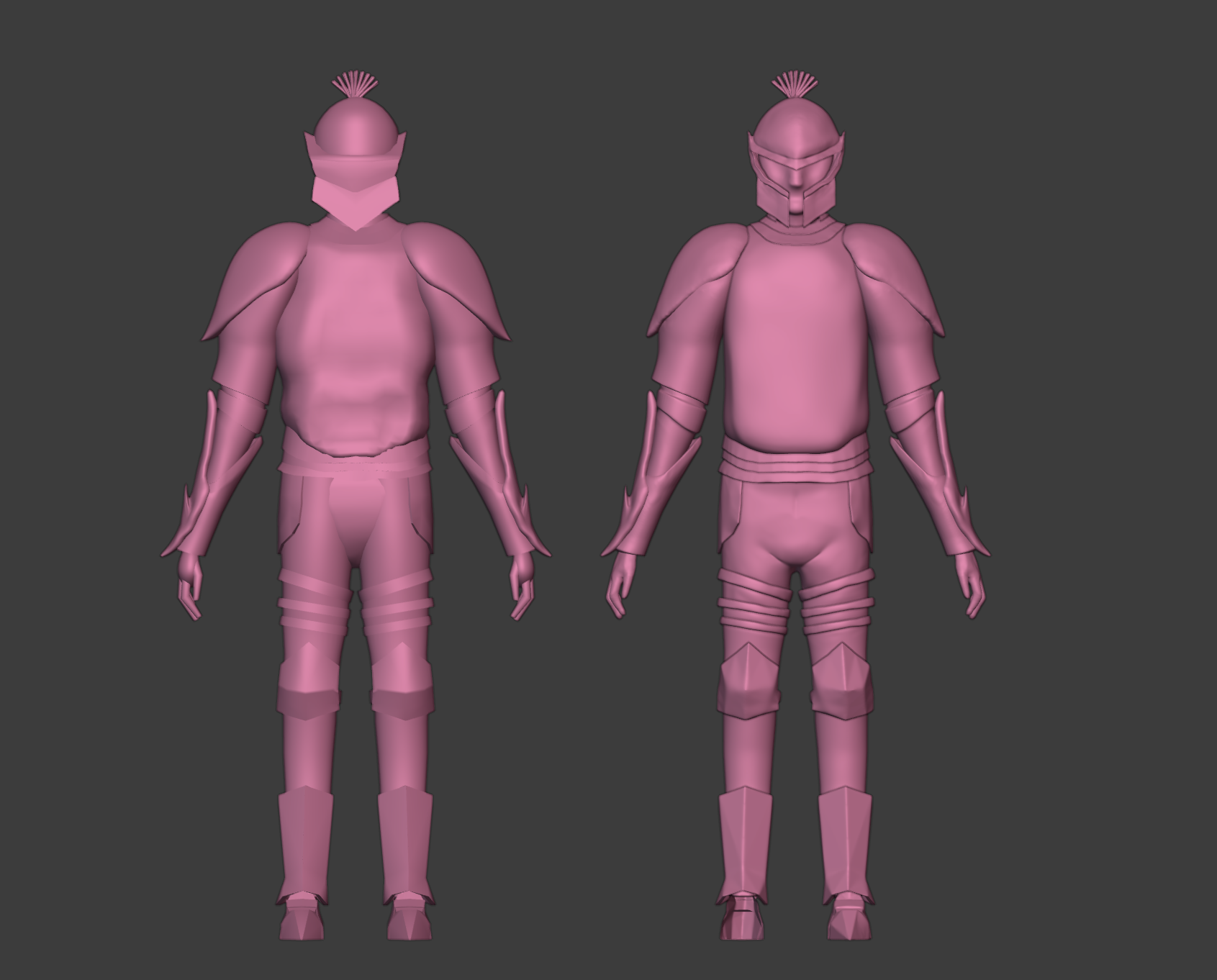 Next, we'll be going back to Aelizia's model, and we'll be using retopology techniques to create the low poly model. Then, we'll bake both versions of the model to create the low poly in-game asset (which hopefully will contain all the details of the high poly model but nowhere near that triangle count!). Finally, it will be time for texturing, and, after that, rigging!