This is the very first development diary for Farmwand. We will talk a bit about the game and how we are starting its development, as we begin creating the world, characters and features of the game!

At the end of last month we officially announced our upcoming game Farmwand, a big passion project for us in which we have been working for a while now.

Farmwand is at its core an open world game set within a fantasy land full of magical creatures, wizards, all sorts of animals and a town populated by many interesting characters that you can form all sorts of relationships with.

My wife and I have always been big fans of farming games, and have loved to play them together over the years. However, we felt that the farming games landscape was sorely missing some more...magical flavors.

From that idea and our shared love for children's fairy tales and books we started developing the first ideas for Farmwand, a game where players could fully immerse into a world that could be both deep and interesting to explore, with friendly, cuddly creatures everywhere but also some thrills and spooks sprinkled all around. After all, who doesn't like a bit of excitement? ;)

Also, since the whole idea came from our times playing together, Farmwand has been designed from the very beginning as a game that can be played either alone or with friends. Tons of activities, mini games and story beats as well as all the characters the players will find along the adventure have been designed with this concept of building relationships, playing together and having fun with friends (and rivals!).

We will show a lot more about these in the upcoming months as the development keeps going. For now, we want to show you all a little bit of the initial work we have been doing for the game, which at this point is a lot of core features and some initial elements for the environments and world.

Since farming is one of the core points of our game, from the start we settled on a quite long list of crops that we wanted to include, both common and...from a more magical sort.

The style for the crops was something that we discussed at length as well. Did we want to make something very cartoony, just to get the idea through? Or would we make them more realistic? In the end, we both knew what we wanted for the crops was that they looked pretty, like pulled directly from a children's book pages. So, we settled in a semi-realistic style where the general shape of the crops would be more similar to the real plant, but the proportions, details and colors would be more stylized.

Every crop in the game starts its life as a concept, a small draft where we decide its general appearance, how big it will be compared to the standard plot of land where it will be planted, as well as the different stages it will go through as it grows.

In the past few days we have released a few screenshots and GIFs of several of them, but there are many more currently being designed.

More work went into deciding the style for the characters, especially the first character we would show and which we knew would be, for the months to come, the player's character.

The design came from the very unique style in which my wife draws (which I had seen already several times over the years) and that had a special appeal that fitted right with our children's storybook style. To her, it was a kid's doodle. But to me, it seemed like the perfect little character to start the Farmwand adventure :)

Then, she designed some initial outfits for the character while I worked on the model and its shaders and code so that we could select any combination of appearances with the elements we had and any elements we added later and...

...done! Our first character for the game had come to life out of the many drafts and sleepless nights of work. There was a lot of technical work behind the final look inside Unity, setting up the cloth simulations and even small details such as blinking...but we will talk about those at another time.

Cats and witches go hand in hand. It is a given. Thus, we knew that cats had to play a big role in our game.

However, not everyone is a cats person. Some may like dogs. Some may like owls. There are people who may even have a pet rock. And we wanted to give something to everyone, which meant that we have quite a few animals to design, animate and bring into the game.

Then there are the actual farm related animals, like cows and chickens and pigs. And once again, some other creatures of a more magical sort.

I've been the one in charge of designing the animals for Farmwand while trying to keep all of our style consistent. However, since animals are living beings with personalities, I wanted to translate some of those characteristics into the very shape of their bodies.

The original design I made for the cat had very large paws that we thought would make it look funnier. But a cat is a more elegant sort of animal (at least most of them) and in the end we decided that what fitted the cat's personality most was a tiny set of paws that made them look proud and stylish. And they still looked quite funny.

The chicken's design was a simple one. What is a chicken, if not an egg with legs? 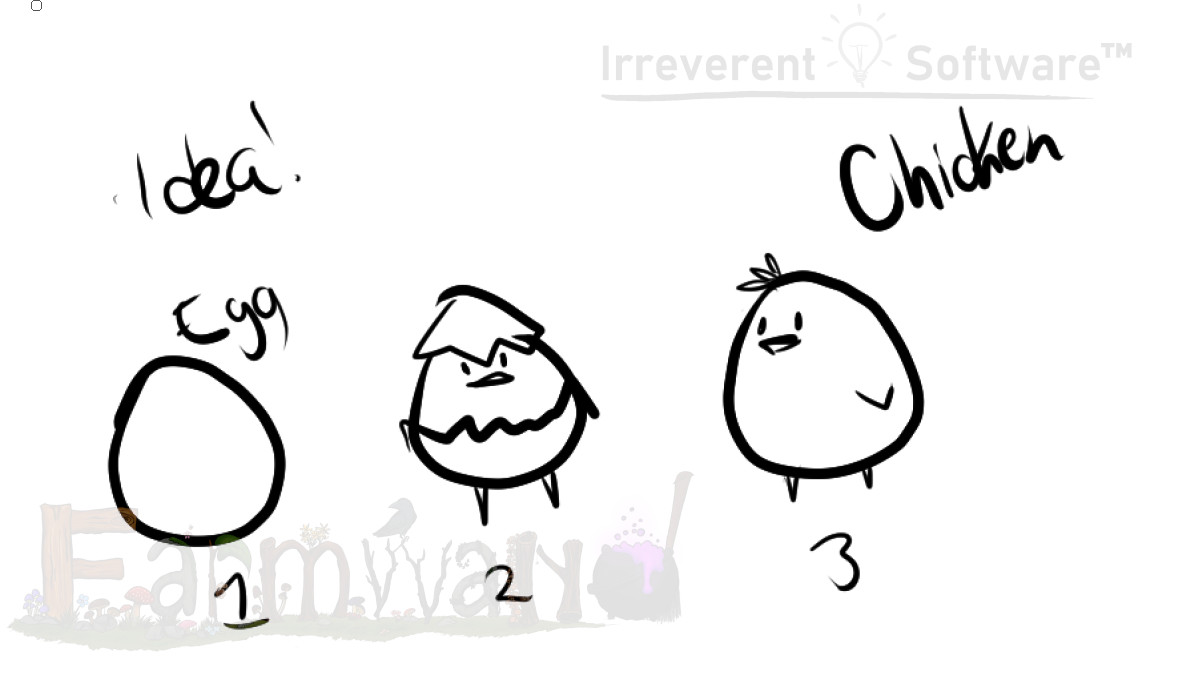 Look who's just broke out their egg this morning - Indie DB

There is plenty more work to do as we work now on the different gameplay elements, many more outfits and hairstyles for all sorts of combinations, the main town and its inhabitants as well as all the creatures, monsters and secrets that will be ready to be discovered in Farmwand.

And that's it. This project sprouted with the simplest comment during one of our play sessions : "Wouldn't it be fun to have some spell for this?". And here we are, with a brand new, growing game that has quickly become our passion by mixing many of the things we love.

No matter whether you want to play alone or with your partner, friends or family through this adventure, whether you want to explore and fly in your broom, or plant some sweet watermelons, fight some trolls or simply relax, Farmwand will have something for you and we hope you will enjoy the view and, most importantly, have a great time in our little world. We hope, even make it your little world as well.

We are very happy to have you join this journey with us, through these Dev Diaries and anywhere else you choose to follow us :)