A devlog post about the state of Vagrus - The Riven Realms.

With the arrival of Factions to Vagrus, you guys got a new way to specialize your comitatus. Up until the addition of Faction rewards, however, this meant some obscure (albeit very welcome - we're looking at you, road tax) boons and perks but then with claimable rewards, Factions quickly became our players' new best friends.

The Name of the Game

In its core, the system is well-known in video games: build more reputation by doing repeatable, procedurally generated Tasks as well as unique stories, unlock higher tiers of Standing with a Faction by doing so, and receive your rewards. The higher the Standing, the better the rewards - it is that simple. Or is it? Of course, staying friendly with a Faction might be a challenge of its own, seeing how they tend to hate each other so passionately. This means that gaining reputation with a Faction will reduce reputation with their enemies, albeit not with the same intensity. It was deliberately implemented this way so that you can not get all the goodies in a single run - a balancing act, a tool of immersion, and a factor in replayability. 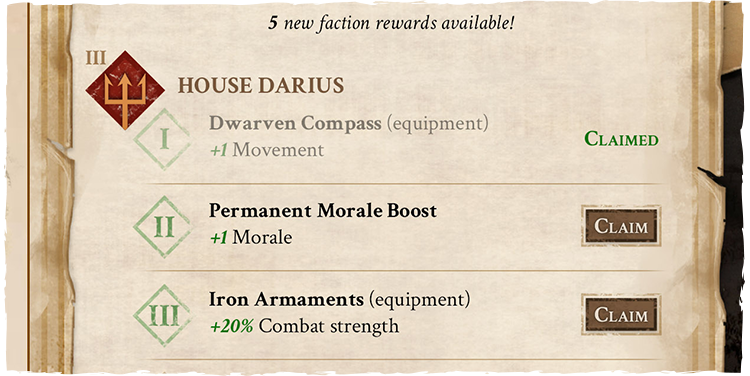 Two kinds of rewards are bound to Faction Standing:

All in all, we are very happy with how Factions - and the related rewards - have turned out in the game. There is still some tweaking to be done, perhaps overhauls of rewards as well, but we have had a very positive feedback from our player base and we're very excited to see how these awesome rewards will motivate you guys to delve into the Faction system.