In our Character Design series, we have touched upon how we come up with the stats and skills for the Companion characters and enemies in Vagrus. A great number of those stats come in to play in action, so in this new Companion combat series, we are going to walk you through how they work in the game. Let's start at the basics!

Companion Combat is turn-based, where 1 to 6 enemies fight against your team of 1 to 6 Companions. You can use the Skills of your Companions to defeat your enemies, protect your Companions, and set yourself up in advantageous positions on the combat board.

Companion combat is made up of rounds. Each round, all the participants take turns to act, and when everyone has had their turn, the current round ends and a new round is started. This goes on until either all your Companions or all your enemies are defeated.


The main blocks that you can see in the Companion combat are these:

The Combat board is divided into two sides: the friendly side (left), where your Companions and occasional allies are, and the opponent side (right), where your enemies are. Both sides can have a maximum of 6 combatants. Each side has a front row (melee row) and a back row (support row). Each row has 3 positions. Certain skills can only be used when standing in a position of the appropriate row (for example, melee skills can only be used from the melee row). 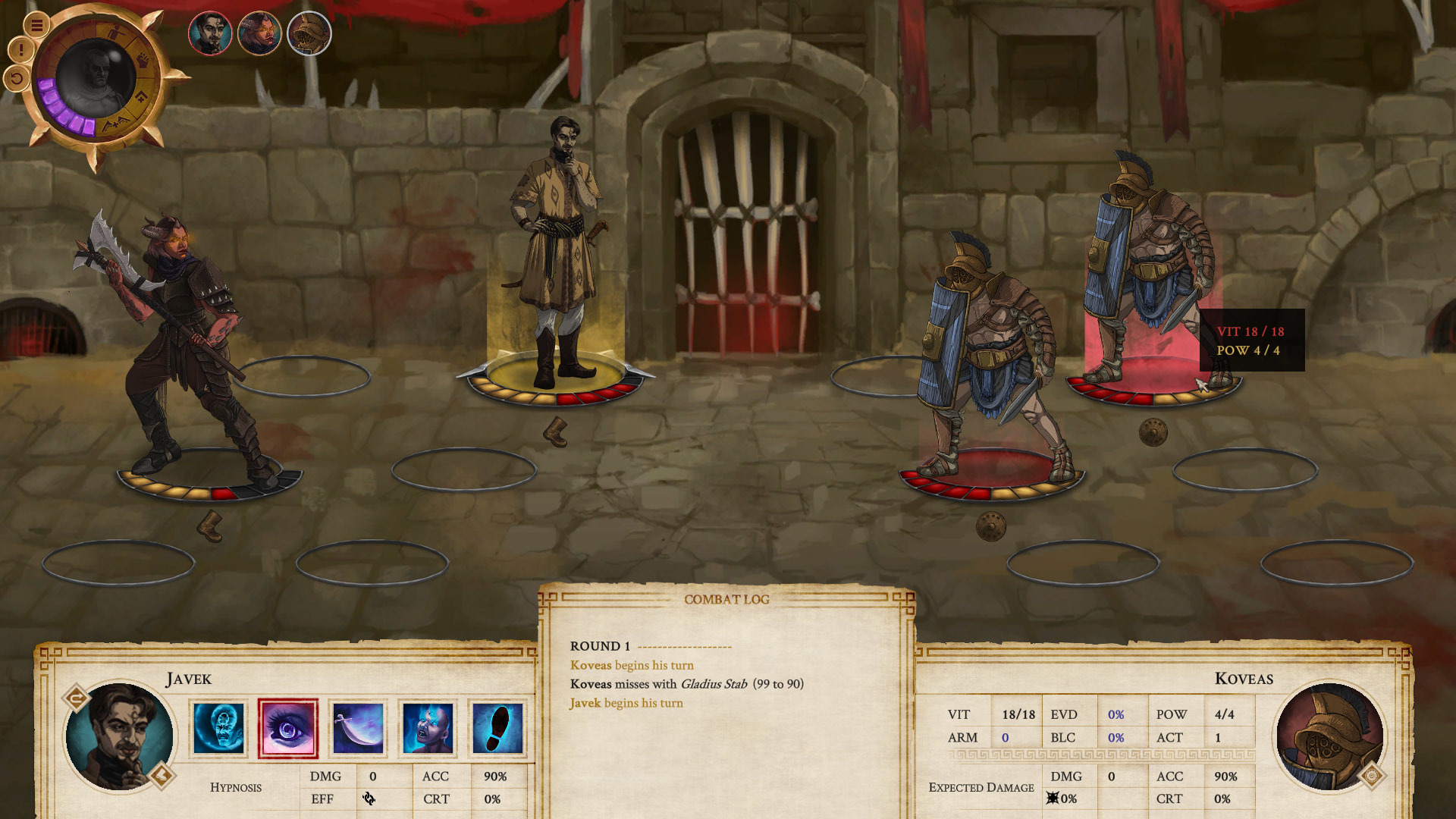 The minimized Character sheet features the basic stats of your active Companion: their set of skill icons and the stats of said skills (more on skills in Part 2!). The Character Sheet can be opened to its full size, where you can see all the combat-relevant stats of the active Companion and consult the tooltips to learn more of each stat.

The Combat Log can be consulted at any time to see what exactly occurred. The log can be scrolled but if you wish to see more of it, it can be opened fully.

You as a vagrus do not take part in combat directly but you can influence what happens in a very direct way nonetheless. The Leader medallion (top left corner) shows your Resourcefulness (purple bar) and Leadership skills. Each such skill can be unlocked by leveling up your vagrus, and each of these can be used to alter the course of combat using Resourcefulness. For example, Empower can be used to give Power to a Companion so that they can use powerful skills again, or Aid can be used to bring back Downed characters (who are essentially defeated and can't act in their turn). This brings a whole new strategic level to Companion combat.

All characters can Move to any adjacent position on their side of the battlefield. If they move into a position that is occupied by another character, that character is pushed out of the position it occupies and has to be moved into an adjacent free position (even to the position the moving character has just left).

Melee Skills, of course, can only be used from the front row. Additionally, not only do characters in the front row prevent melee attacks against characters directly behind them but also make them more difficult to hit with certain Ranged Skills (those that have the Line of Sight property), so moving and positioning is paramount in Companion combat. By extension, Combat Skills that move enemies can be extremely useful to get to pesky support or damage-dealing enemies in the back line or to prevent melee-heavy enemies from using Skills.

Skills vary vastly in what or who you can target with them. Some skills target an enemy (or several enemies even) while others your own Companion or Companions. There are also certain Skills that target empty positions and leave some kind of delayed effect on it (for example, a hail of arrows to strike anyone entering the position). Finally, some Skills only target the user, typically self-buffs.

Ranged Skills can target anyone on the given side of the battlefield. A subset of Ranged Skills have the Line of Sight property - these receive a flat penalty to Accuracy when targeting an opponent behind another enemy or an obstacle (thus gaining Cover).

Some Combat Skills target multiple enemies in a set configuration from one of these: 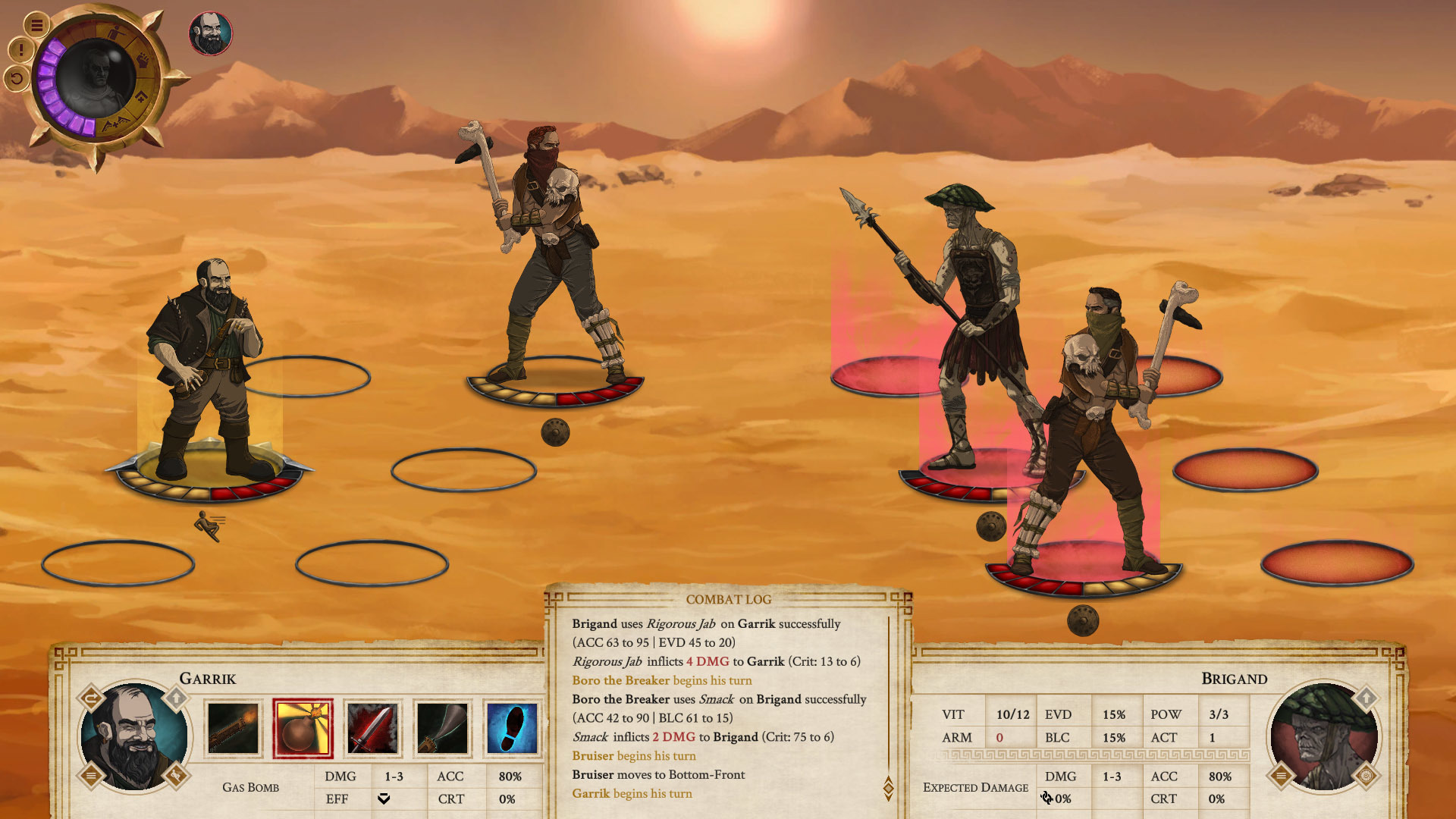 A lot of Companions and enemies have Skills that include some kind of Movement in the effects. The case is either that a Move precedes the Skill's effect or that a Move follows it. Javek's Receding Swing allows him to attack someone in Melee and then Move, which is ideal to bring the relatively squishy sorcerer to safety in the back line.

Morwen's Strafe is another great example: she hits two adjacent enemies in Melee, then receives a Move to the side. This way she can often deal damage while repositioning herself either to protect someone in the back or to distance herself from dangerous enemies.

Beside Move and using Skills, Companions also have the option to forfeit their turn. This is not only useful when they have nothing to do but outright compulsory when they can not act (for example, because none of their Skills have viable targets and they are prevented from Moving by an effect).

With every Companion and enemy having four Combat Skills and such an emphasis on movement and positioning, combat is deeply strategic and has a lot of synergies even in the Prologue. We hope you found this useful or interesting. In the next part we will talk about defenses and how they affect actions.

Support these guys on fig! Fig.co