In which aesthetic changes continue, in a variety of elements; the barrow-level's surrounding forest is improved (I feel); grass is brightened and greened; the prologue-pyramid is touched-up; the player-light is dimmed a bit in the near-ground; the enemy in level four sees AI and animation work; and a post-combat blood-pool is added to level four.

This week's screenshot shows revision to the lighting in sunlit scenes: 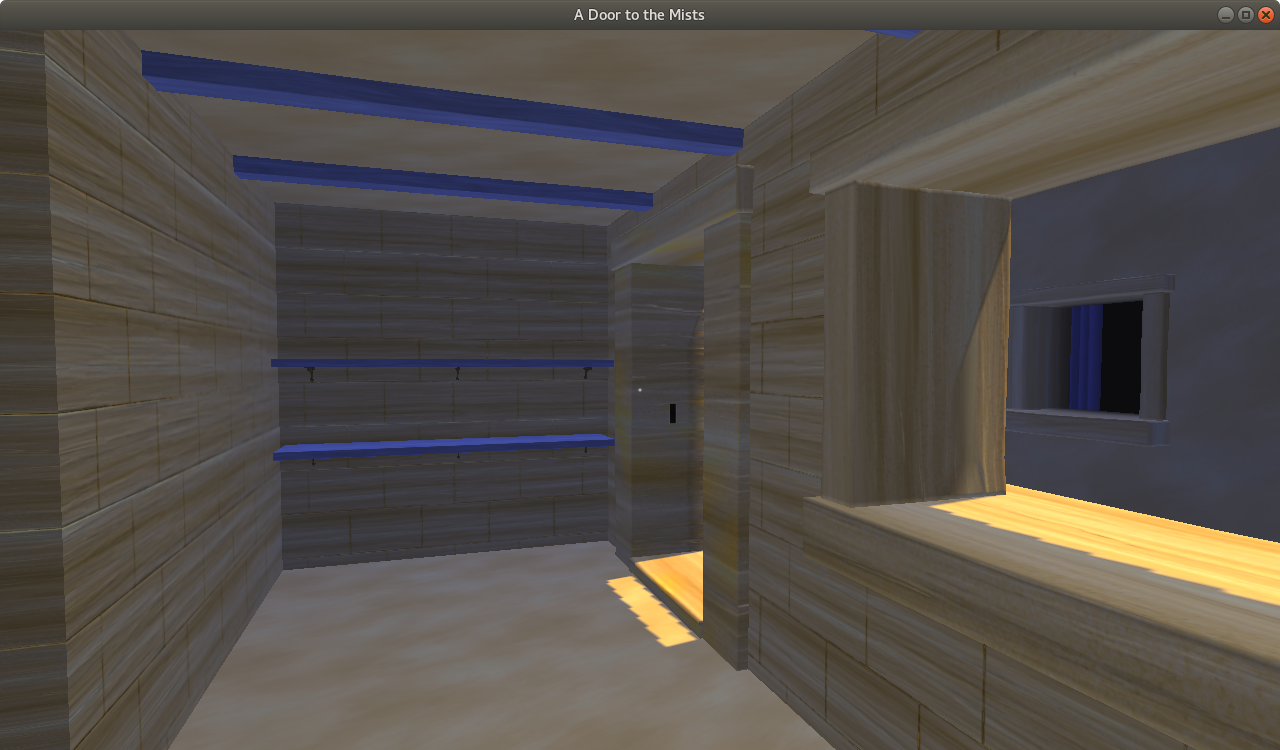 Once again I have a fair few images to show, and so intend to scatter them throughout this post!

The week just past continued to be one of aesthetic work, but with two other things done besides:

The aesthetic work of the week just past was a fairly varied collection. Most of these changes are perhaps not worth detailing here, so let me simply list them briefly: I brightened the shadowed parts of sunlit scenes (as shown above); I applied the general sunlight changes to some of the more-specific sunlight shaders (such as the sunlight animal-sign shader); and I reworked the backdrop to the prologue level. 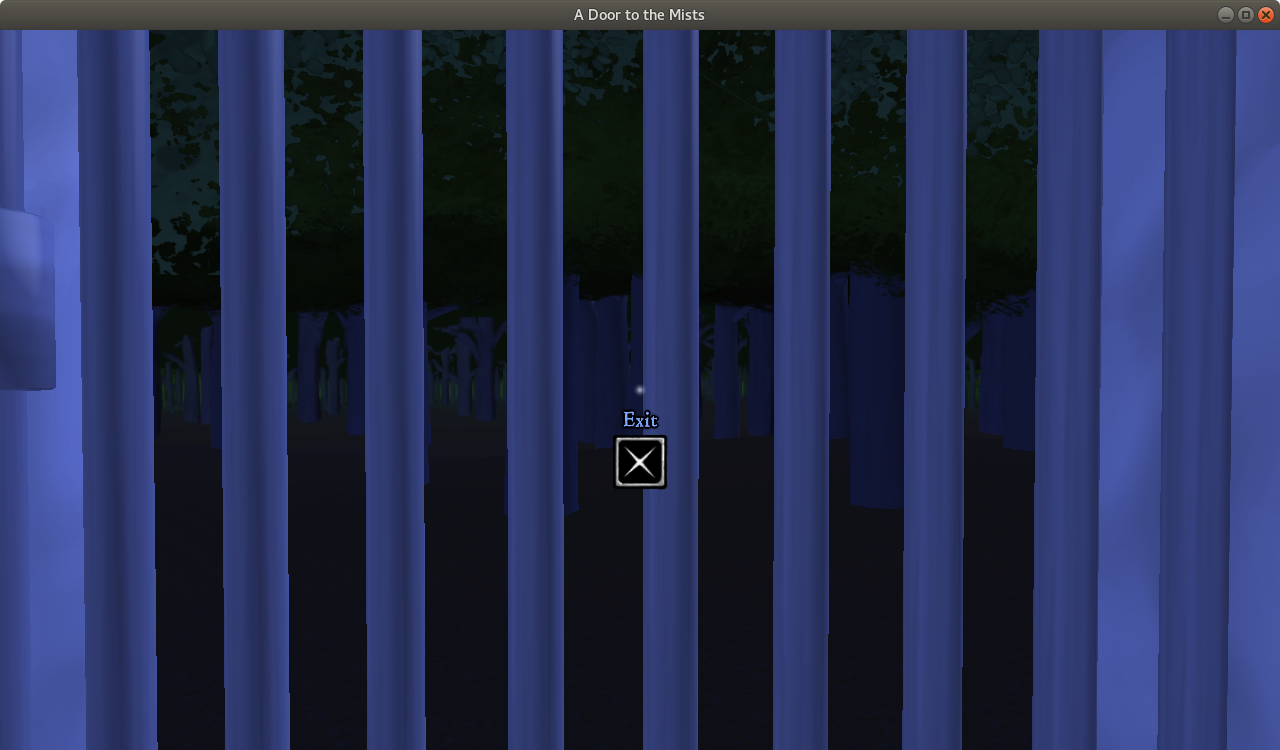 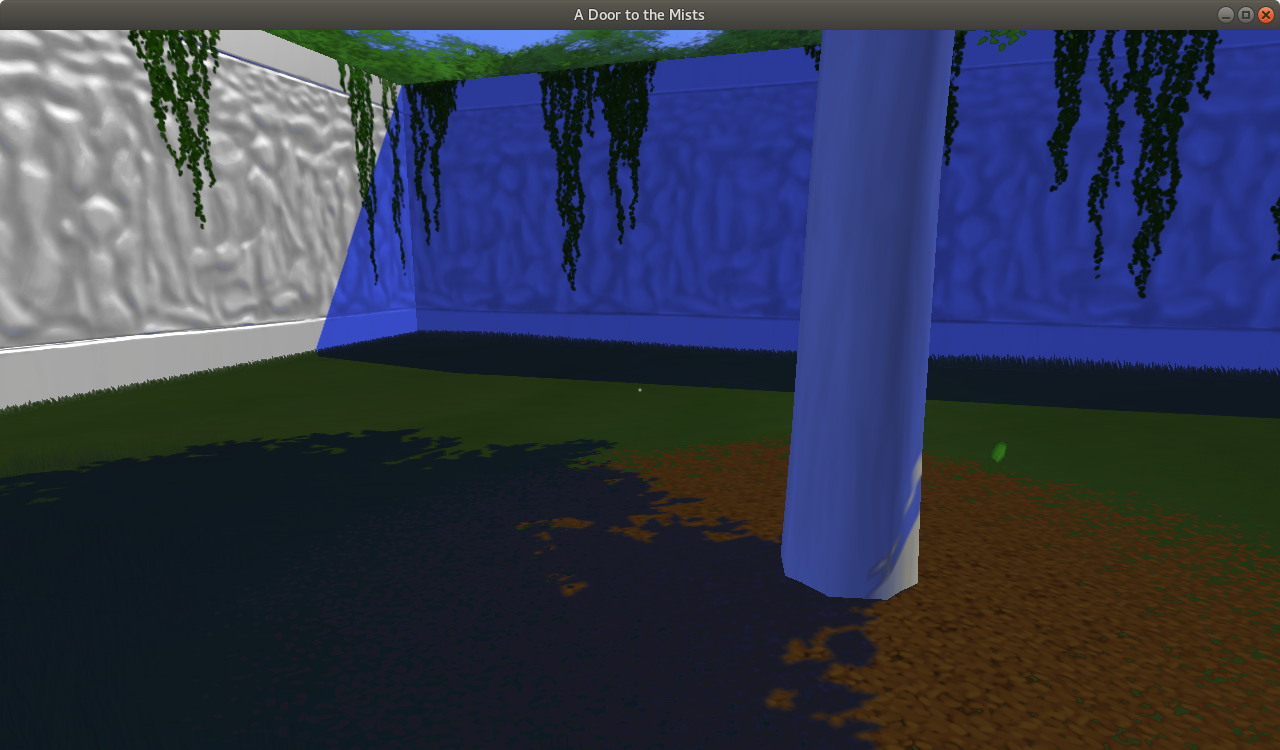 I also reworked some of the colouring of the forest that surrounds the barrow-level.

As I had it at the time of last week's blog-post, I believe, that surrounding forest had a few issues: The leaf-litter rather dark, and contrasted a little too harshly with the blued undergrowth. That bluing of the shadowed undergrowth in turn contrasted a bit too much with the better-lit sections. And finally, the distant ground, beyond the visible leaf-litter, had a colour-gradient that I wasn't happy with.

All of that has been reworked. And together with the general brightening of the sunlight shaders, I feel that the result is a much softer, more cohesive, and more inviting backdrop. 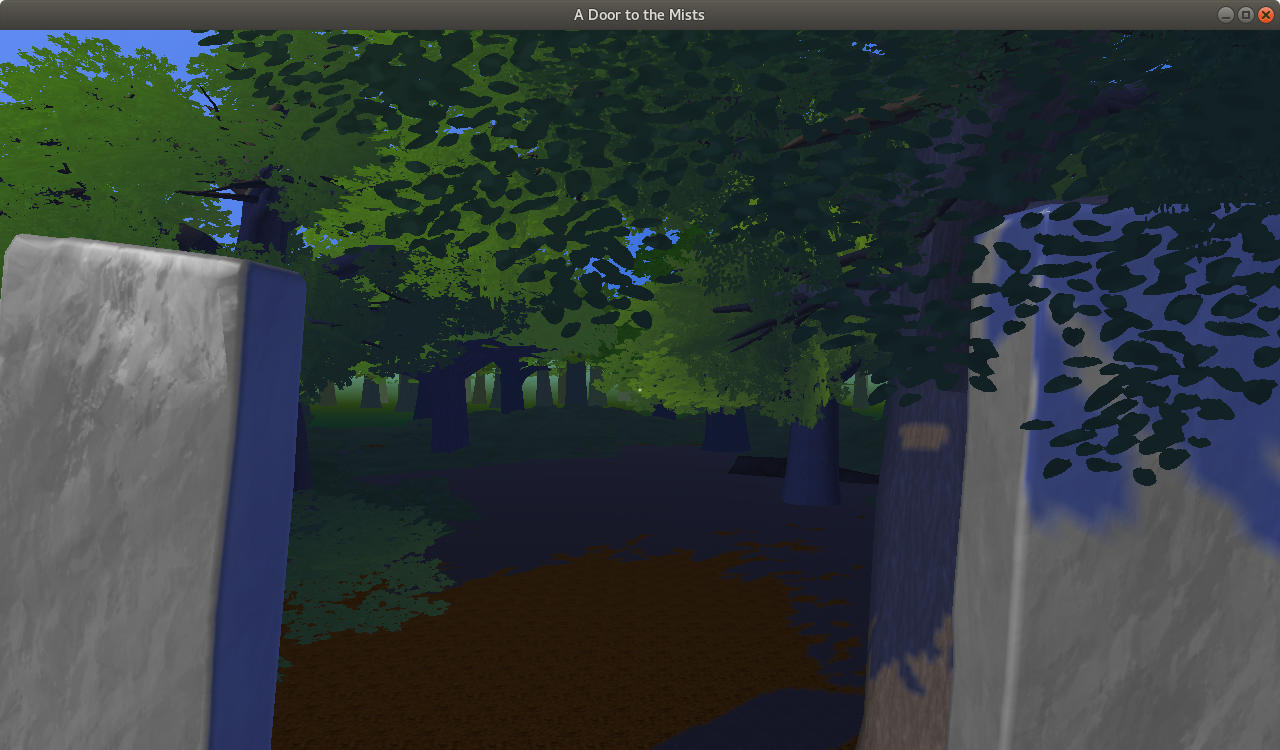 I don't yet know whether this is the final look--I'm a little undecided on the brightness of the leaf-litter and its shadows. But we'll see!

One of the reasons that the leaf-litter is so much brighter is that I increased the brightness--or more accurately, shifted the lighting towards brightness--of the shader that handles that leaf-litter.

(And concomitantly I made some changes to the way that the grass offsets it colours: the brightening had left the grass looking too yellow, and so I altered it to bring in more green again, as I recall.) 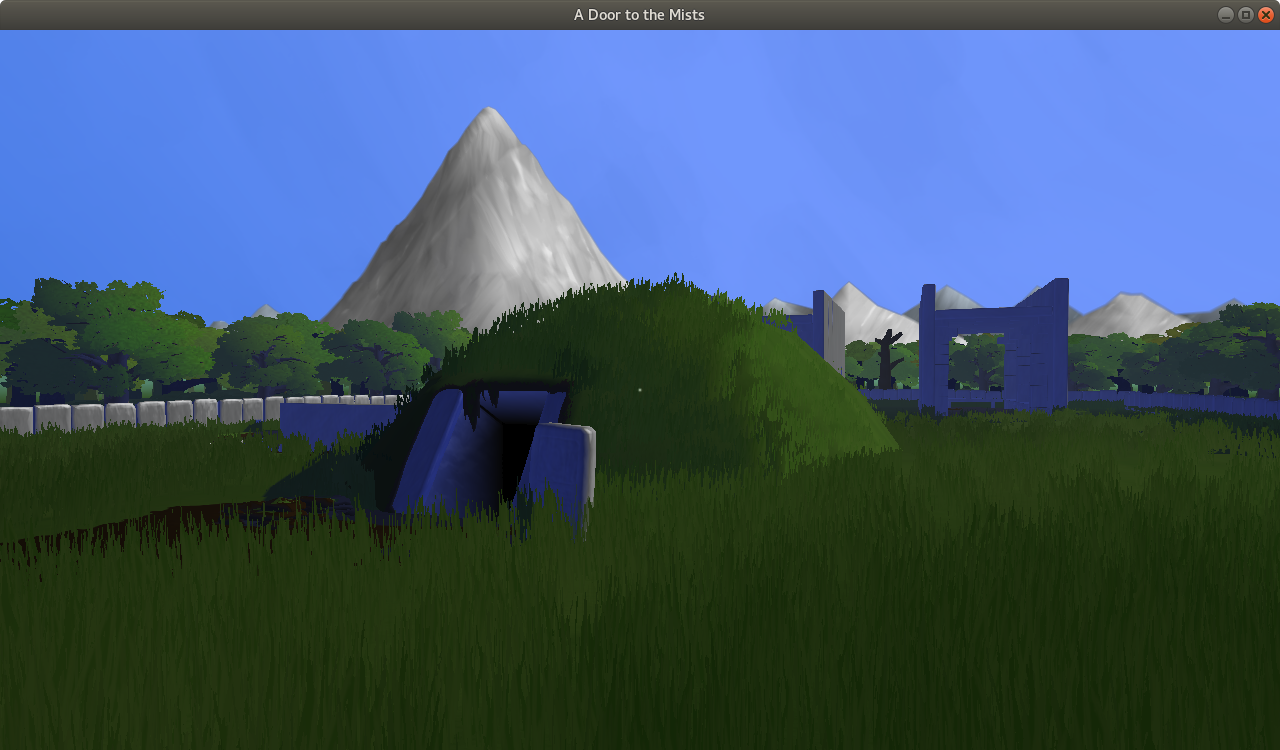 I do think that the grass looks better this way; if I decide that I want the leaf-litter to be dimmer again, then I'll want to look for a way to differentiate the two colours, I think...

The look of the prologue pyramid continued to trouble me, and in the week just past I had another shot at improving it. And I think that I have done so: I reworked the normal-maps that are applied to the pyramid exterior, producing, I think, a look that's both more appealing and more fitting. 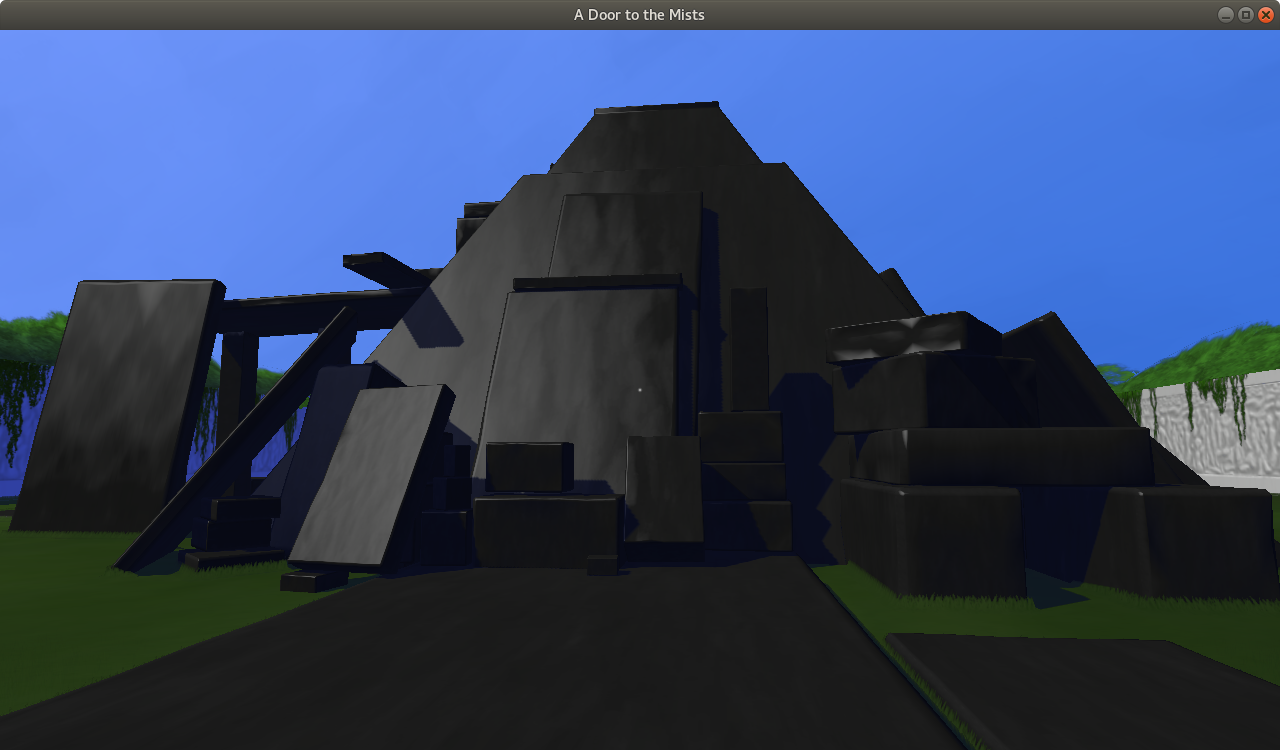 I believe that I mentioned previously that the player-light had become brighter in the near-ground due to a change that I'd made. In the week just past I concluded that it was too bright, in particular in the under-city of Tenereth, and so reduced that near-ground lighting a bit. It helps, I think--although I'm still considering further changes there.

Moving away from aesthetics for a bit, I also did some work on the new enemy encountered in level four, the antagonistic adventurer: I polished the character's AI somewhat, touched-up some animations--and added a blood-pool that slowly appears after the character is defeated.