Warkeep is a side scrolling tower defense game that combines elements of tile-matching puzzle solving to build a keep with the traditional flair of a top down tower defense game. Players begin by building their keep utilizing wall blocks, rooms, and towers. Rooms provide a unit which will defend the keep to their death, while towers provide units which will automatically target and attack incoming enemies.

When the keep is fully built, the enemy assault begins. Players must survive waves of enemies that will stop at nothing to topple the Warkeep. To counter this, the player has their dedicated hero which they can send out to attack or retreat back to the keep when overrun. The player also has access to powerful abilities they can actively use. And as enemy units are killed, gold is gained which can then be spent during the battle to upgrade their rooms and towers to make them more effective.

Can you survive the onslaught? If not, the Warkeep will surely fall. But if you can win, you will be able to fight back the conquering army and reclaim the lands from their evil. Do you focus on perfectly constructed keeps that can withstand anything thrown at it? Or perhaps powerful troops that can fight the enemies back? Or you could gain powerful heroes and abilities and fight the army back on your own? The choice is yours in Warkeep.

Warkeep's closed alpha has begun, and we've created a trailer showcasing the core functionality of the game. We are looking for testers for our closed alpha. To test, please join our Discord server for an invite. If you're unable to test, but would like to help support us in other ways, we also have a Patreon which will give you direct access to the team for whatever strikes your fancy along with better perks long term.

The closed alpha is currently broken into two modes: MyKeep and Endless. 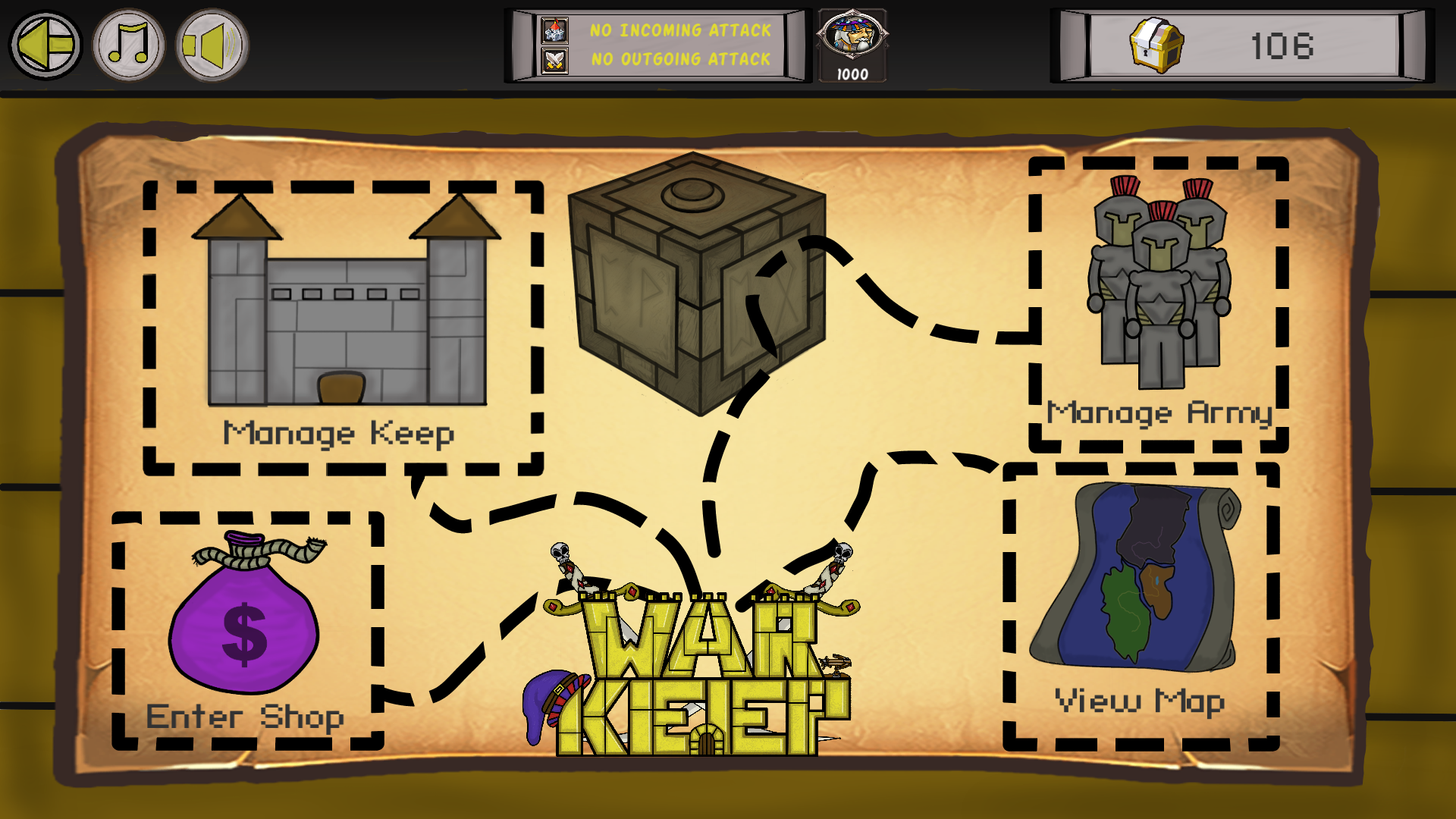 MyKeep is an online competitive mode which pits Warkeep players amongst one another. Players begin with the ability to construct a very simple keep while having the initial resources for a small army. From there, players can form the army into waves which can be sent at other players on the map. Defeating enemies via this army, or successfully defending the player's keep from incoming attacks, will increase rating while also generating resources.

Resources are spent to purchase more pieces for keeps, train more units for the reserve army, hire strong heroes, teleport armies to reduce the time it takes for an army to arrive at a target, and more. They are primarily earned for successful attacks/defenses, but also can be gained from Endless as well as purchased via microtransactions (with level capping what can be done with microtransactions to ensure someone cannot Pay2Win). 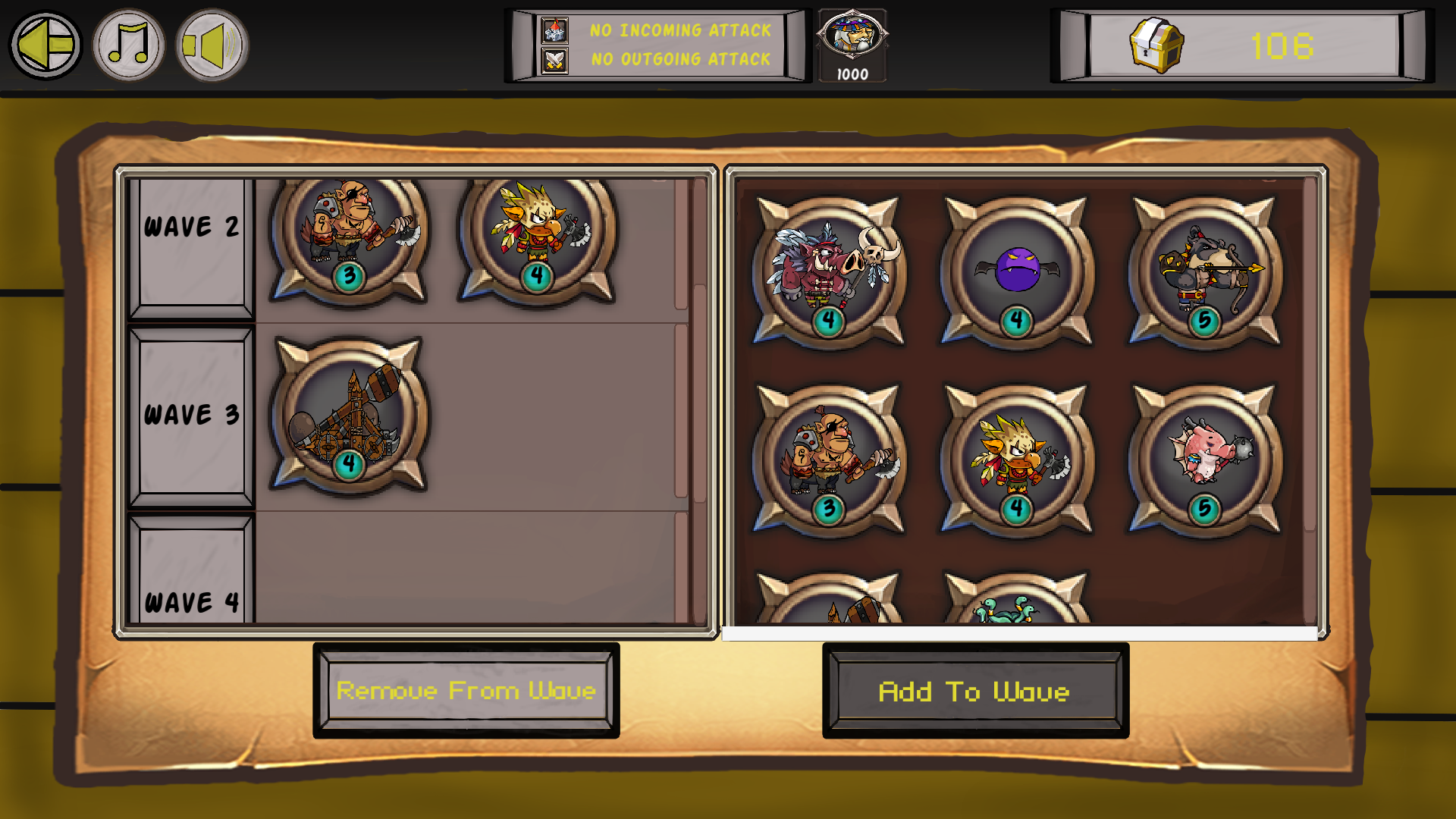 Reserve army units are put together into defined waves to establish a standing army that can be sent towards other players. 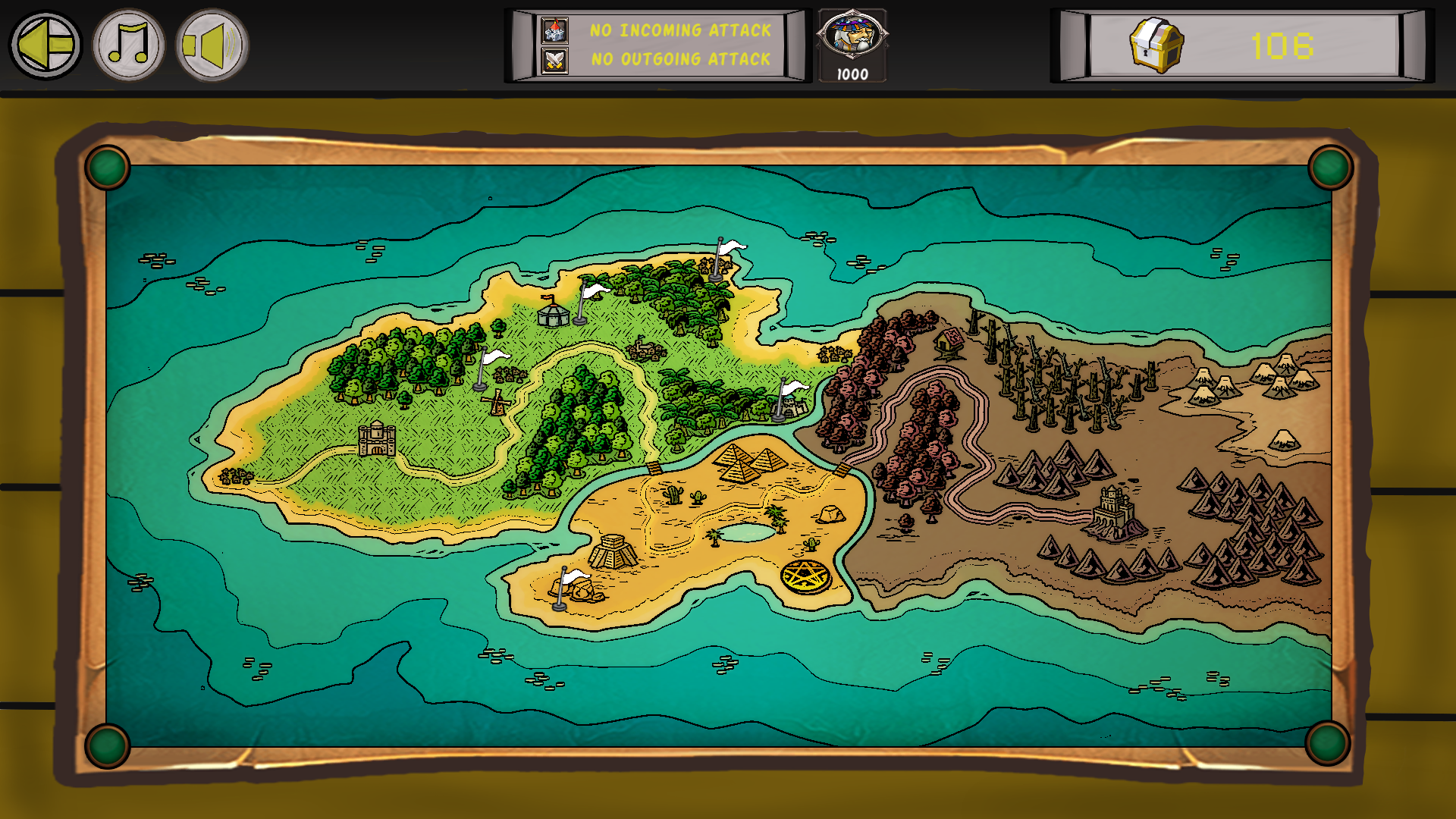 And then juicy targets are ready to be selected, with flags determining the general difficulty of a target (white is an "easier" target based on rating, and red is a "harder" target). 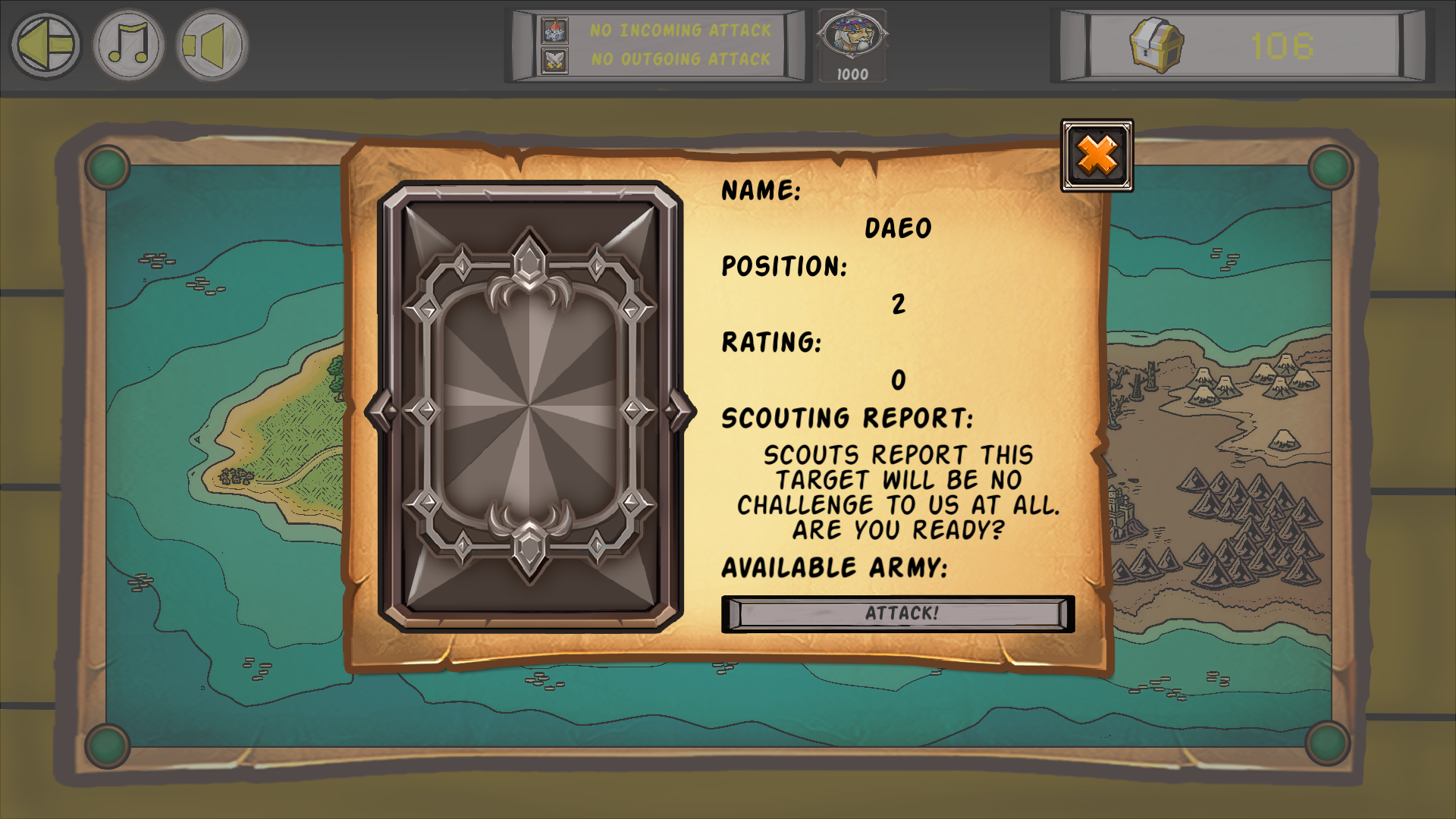 Find a good target, and have an army built and ready to be sent? Simply hit attack and the army will begin the trek towards that target. This is an easier we're constantly tweaking, with the initial timer being 8 hours. Upgrades in the tech tree related to logistics will reduce this up to half, while the wizard mentor can teleport the entire army to or from a target for a nominal resources fee. 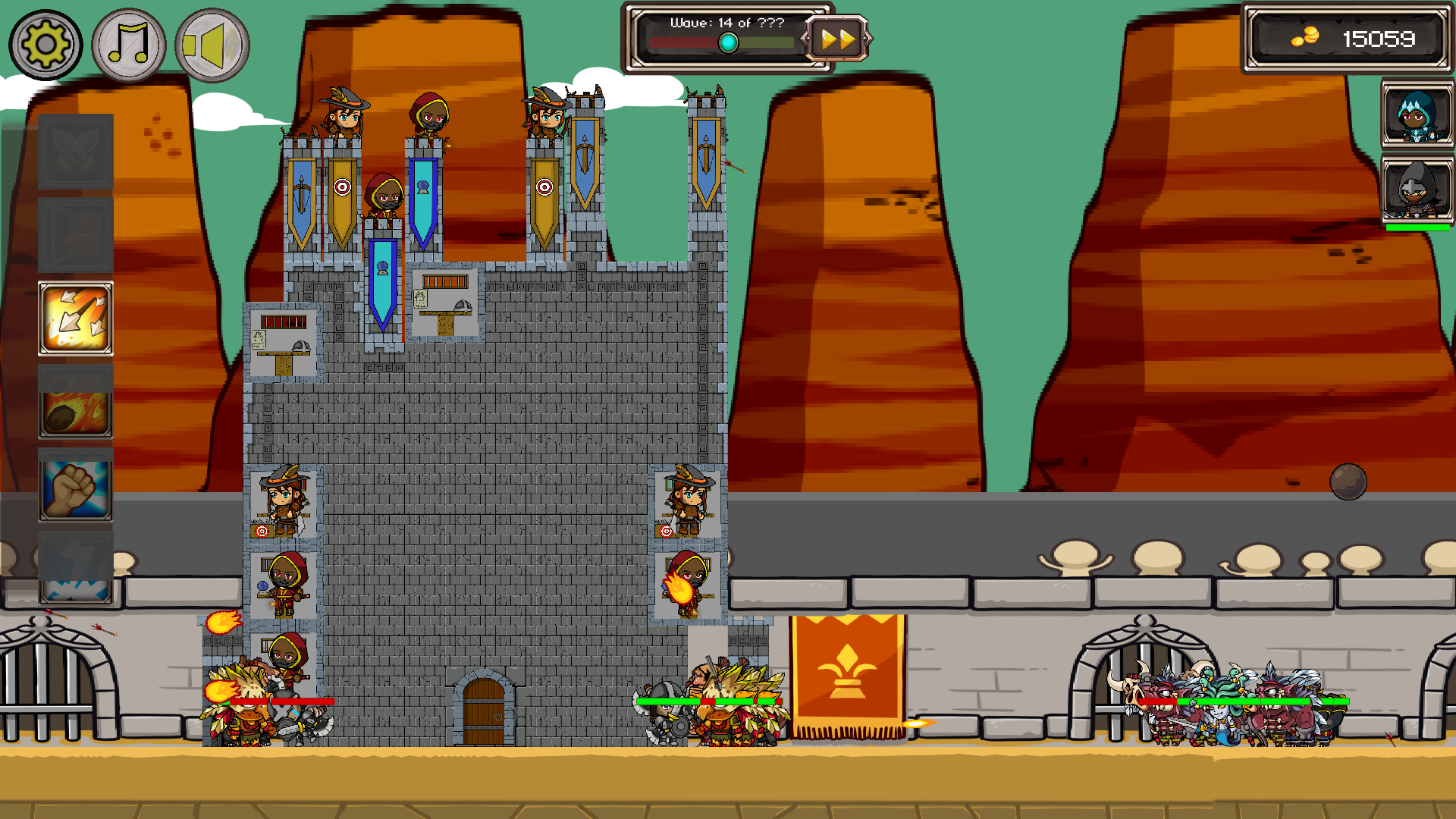 Endless is both a local play and leaderboard driven mode. For someone not willing to create an account and be online to try out MyKeep, it contains the core elements of Warkeep: the ability to build a keep, and the ability to fight against an onslaught of waves to survive as long as possible. For someone new to the game, its a great way to get their feet wet, while seasoned players can use this as a way to test keep designs in order to be able to handle anything thrown their way. As an added bonus, in leaderboard mode, the top 1000 players per day receive a resources bonus for MyKeep. 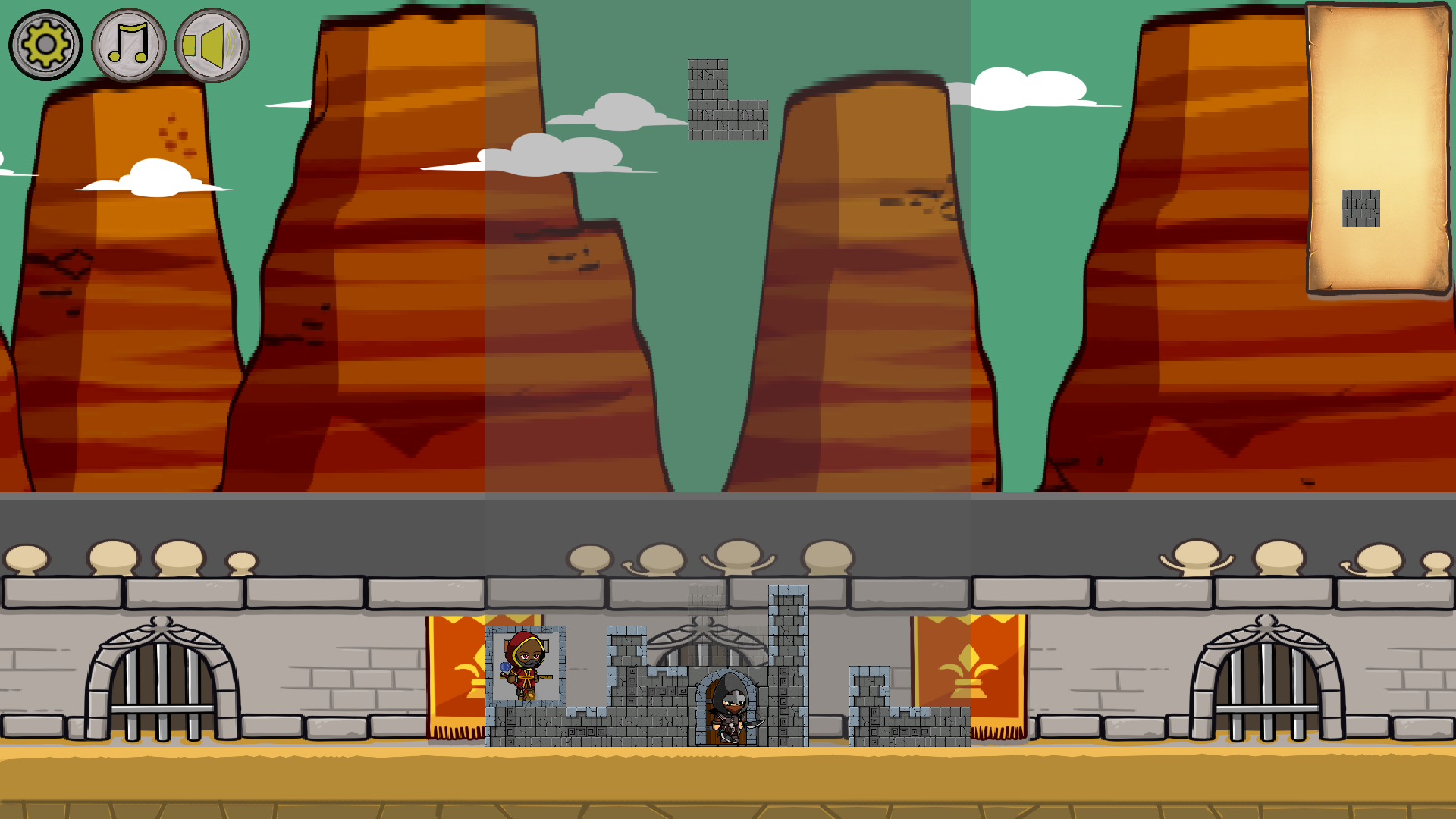 Building a keep functions like traditional tile matching games. Pieces are levitated via the Warkeep artifact but slowly fall towards the ground. They can be rotated and shifted left, right, or down. The general goal is to ensure that the keep core (shown as the doors with the hero) are well fortified as their destruction means the loss of the keep. Amongst normal pieces are rooms which contains a unit. "Rotating" a room will change the type of unit inside. These units will passively defend the keep to their death, with ranged units on the edge of a keep shooting out through a window while any other room position allowing the unit to leave through the doors and engage enemies outside. 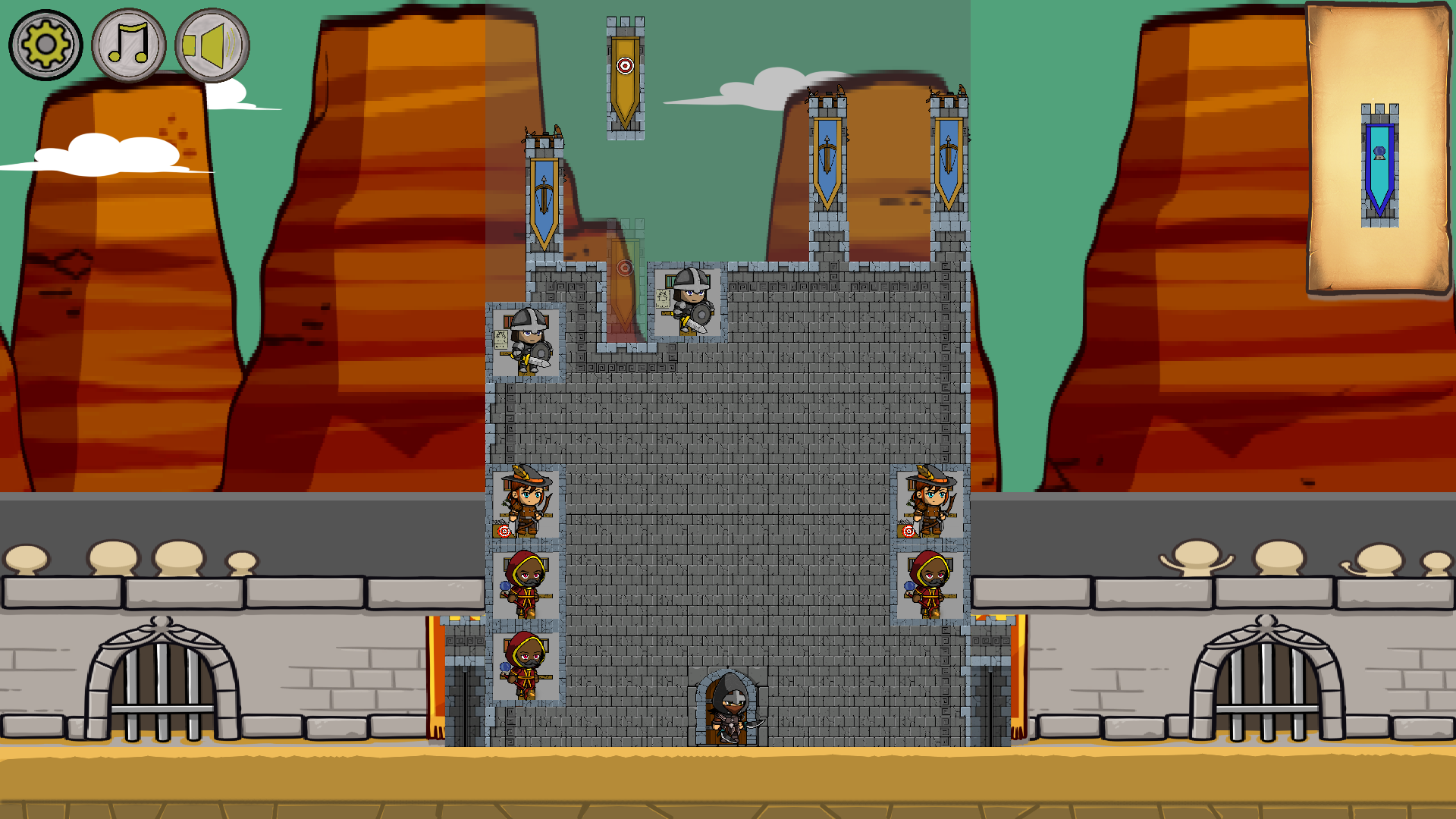 Defenses add the final touches to the keep. They add towers to the top that will passively attack enemies within range. They are similar to rooms on the edge, with the added benefit that siege towers are the only reliable way to take out incoming siege enemies.

In Endless mode, rooms and towers can be upgraded by clicking on them and spending gold to make them more effective. In MyKeep, resources are spent while in the peaceful "view" mode when there are not incoming enemies. In both modes, when a room reaches max level, it offers the ability to upgrade to an elite unit type (not currently in closed alpha). These elite units have pros and cons, but greatly support the defense of the keep. 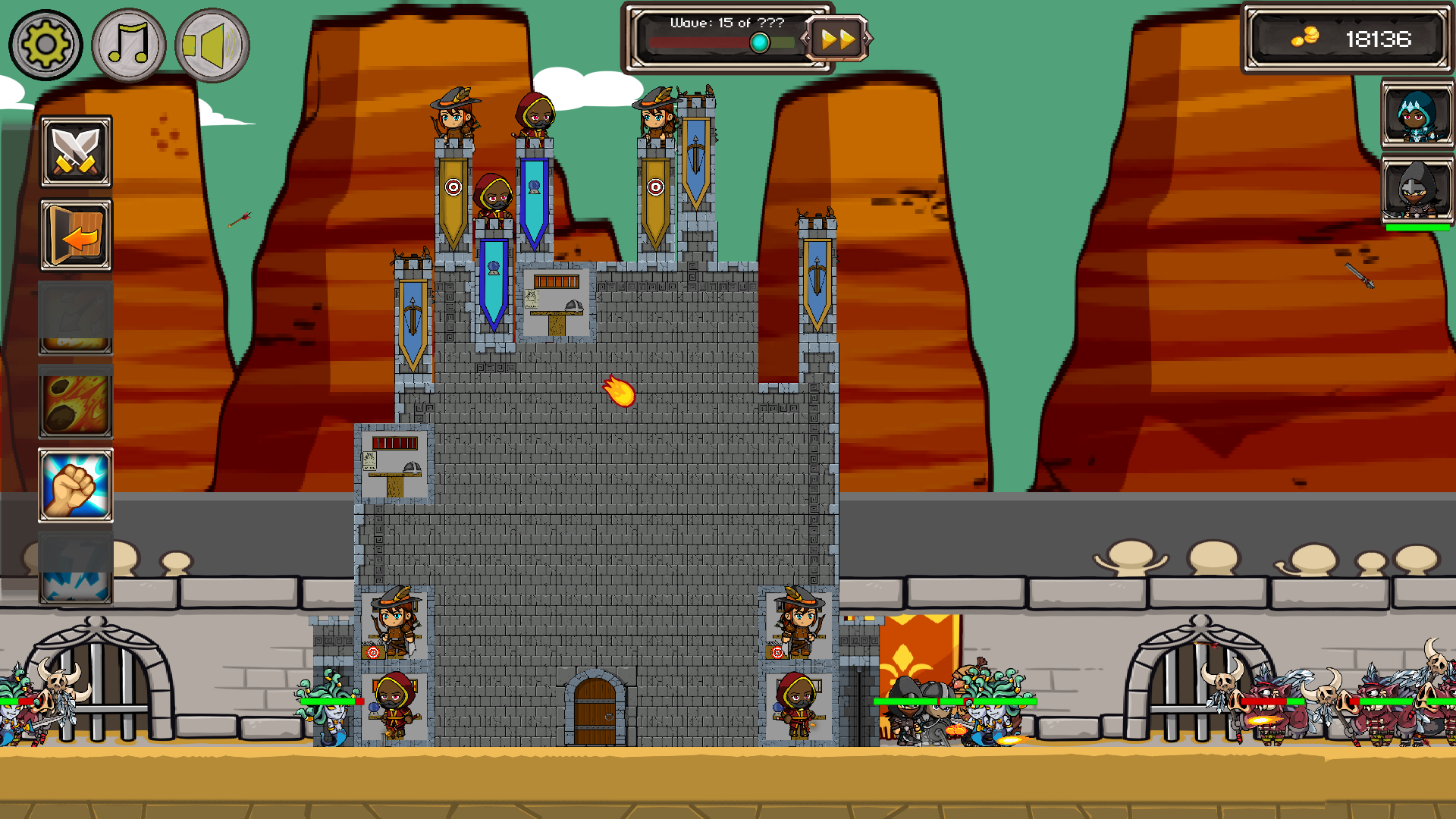 The hero is a very strong unit that can be controlled similar to RTS games. On the left side of the screen are six abilities. The top one is hero move. This functions by sending the hero to the chosen location, where the hero will attack all units along the way. It can be used multiple times positioning the hero wherever is needed. The second ability is retreat which will cause the hero to return to the safety of the keep core and heal up.

The remaining abilities provide an active touch to the game and along with the hero allow the player to interact without simply watching the rooms/towers fight back. They are very strong, but still follow the same rules as the units which use their attacks (i.e. rain of arrows is not effective towards armored units or siege, while barrage will tear through all unit types but has a longer cooldown). 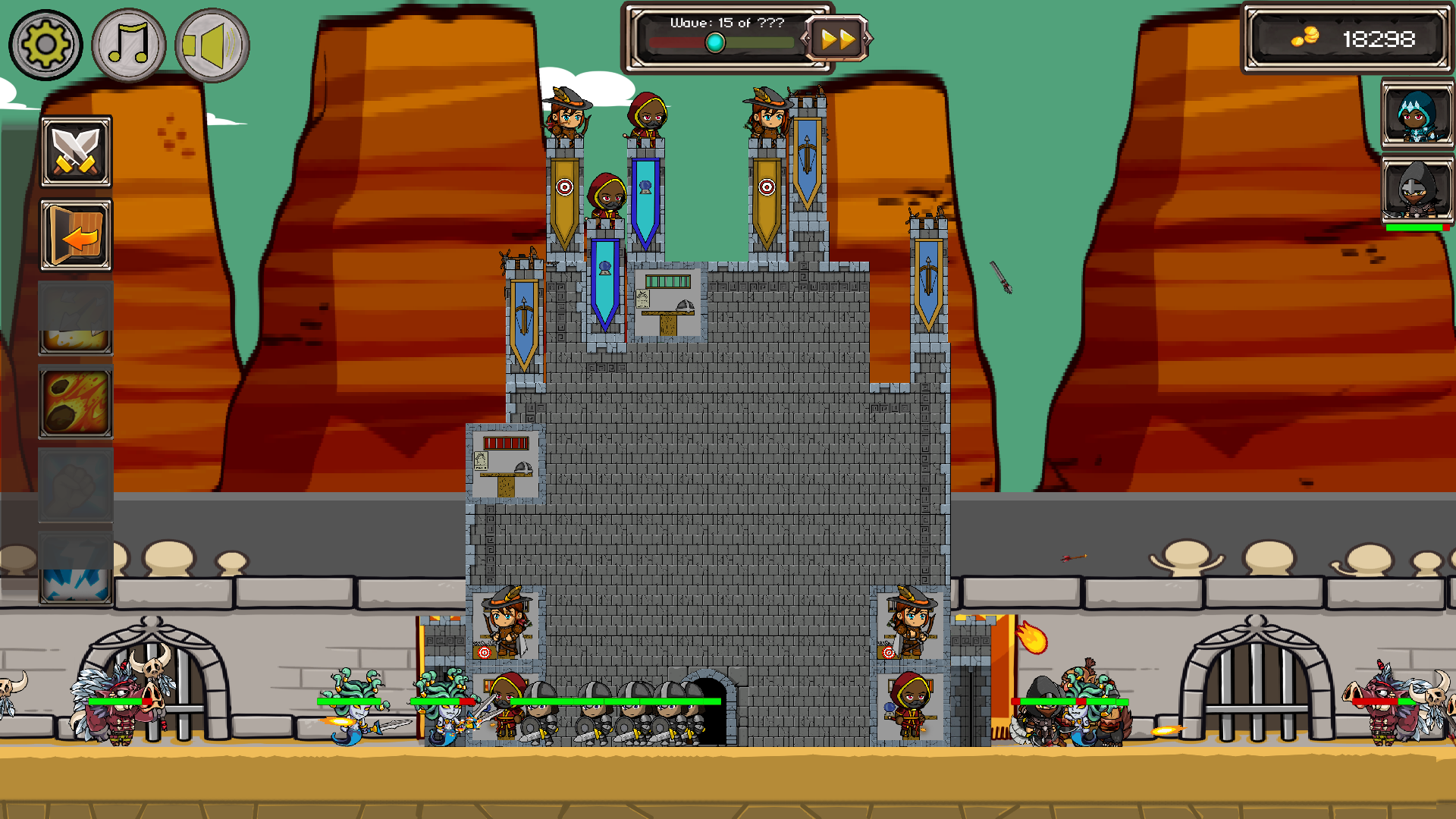 The gameplay of Endless and MyKeep (when defending the keep) is largely identical. Getting practice in Endless will make the attacks coming in within MyKeep much easier to handle, along with providing a good blueprint for what to expect when the player's MyKeep is higher level (with an Endless keep largely being what the player would expect at max level).

We currently have the core functionality in with a few exceptions. MyKeep and Endless are fully playable. Elite units are currently not in, and we are still balancing the starting pieces/army for MyKeep. The goal is to refine the core before adding in the MyKeep leveling mechanism as well as shop to spend resources for upgrades. When we're confident the core gameplay is balanced and fun, we'll plug in the remaining features and test them fully. As mentioned at the beginning, please join our Discord server if you wish to help test. We are looking to provide bonuses for MyKeep for anyone that helps us during this period, while also allowing folks that play Endless now to begin accruing a good resources bonus.

Why Discord? We want to ensure that anyone testing has direct communication with the team. This way if there are any bugs or feedback, we can immediately resolve it. We expect to open up testing once the other features of MyKeep are implemented which should be within the next few months.

We look forward to seeing how everyone likes the direction we've taken with Warkeep, and invite everyone to come join this testing period! And also as mentioned at the start, if you're unable to test, but would like to help support us in other ways, we also have a Patreon which will give you direct access to the team for whatever strikes your fancy along with better perks long term.

We have begun the transition of all placeholder assets over to final.

Quarter Onion Games is proud to announce the launch of the Warkeep demo!

We have begun our IndieDB page! Demo is coming soon!

Quarter Onion Games is proud to announce the launch of the Warkeep demo!

Between the Orcs Tower Defense

Beware Of The Horde Tower Defense