You are a lone scientist in a research facility on automatic lockdown. Everybody and everything is trying to kill you. Fight your way out, collect bigger weapons on the way and blast your enemies into pieces! Compete for high-scores in single player levels or challenge your friends to a multiplayer deathmatch!

The most important reason for this update was that the Linux version is no longer working out-of-the box in many of the modern distributions due to removal of required old libpng library version. Also, a lot of bug fixes and improvements have been made to my "engine code" over the years while developing Hyper Ultra Astronautics. 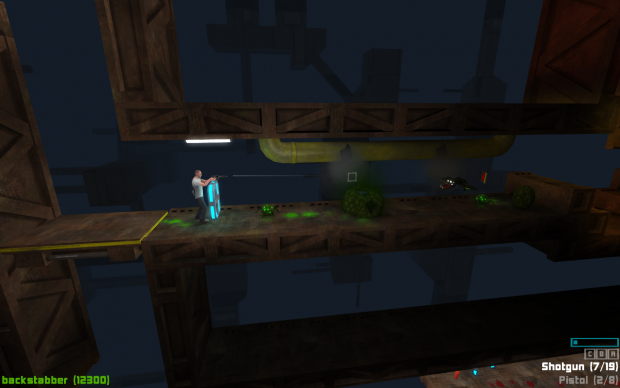 I decided to drop the built-in level sharing mechanism, because it was a maintenance nightmare and due to the fact that during last three years it has been used only three times in total.

I will no longer build a 32-bit Linux version, because practically no-one downloads that anymore.

There has been a lot of code changes, so I would be surprised if there are no new bugs. If you encounter any problems, please report them and I'll sort them out.

Check out the release trailer for some in-game video footage:

The new version has been uploaded to Itch.io: Fractilegames.itch.io

Check out the official game page for more information: Fractilegames.com

A new Lockdown Protocol version 1.3.0 has been released. The game is now available in itch.io and on sale at 50% off!

Lockdown Protocol update 1.2.0 is out!

This new update makes the elevators and platforms move faster.

Lockdown Protocol update 1.1.0 is out!

First update to the final version of Lockdown Protocol is here.

The free playable demo version which lets you play first eight single player levels and one multiplayer level. Besides locking rest of the built-in levels it's otherwise fully functional.

Why can't I play any of the levels I make?

I'm sorry I missed your comment here (I'm still not getting any notifications on new comments here).

Is the created level missing from the list of levels to select, or does it give some error when you try to play it?

When I load a level I made, the screen just shows the background and nothing else happens. I put in one of those SP Start blocks but it's like none of the objects load.

Problem solved, I replied to your email.

The game expects all moving stuff like enemies to stay inside area formed by wall/floor/ceiling blocks. The level in question had a lot of enemies placed outside outer walls, which eventually caused problems when starting the level.

Sorry for the late answer. There are no plans for a coop mode, local or otherwise. I have thought of local split screen multiplayer mode for basic deathmatch, but I'm not sure if that will ever get implemented.

My system is Debian Wheezy 64-bit and I run apt-get upgrade daily.

The game is known to work in Debian Squeeze so it should work in Wheezy too, since Wheezy likely has later version of libc, which is generally backwards compatible.

That libXaw.so.7 requiring GLIBC_2.14 is installed by Desura, so I don't know where it came from. I will have to look into this. I will let you know when I know more.

In the meantime, if you have the time, you could try the direct download version. That might work better, since it uses libXaw provided by the system.

Great! Your reply was very helpful. This commands solve the problem for me:

Good to hear you solved it!

If you are interested, the root cause for this problem is explained and discussed here:
Indiedb.com