The Journey Down - low res prototype

This is the free low-res, no-speech prototype of the coming HD point-n-click game of the same title. The Journey Down is a classical point and click adventure game, full to the brim with puzzles, conspiracies, mystery and adventure! In chapter 1 "Over the Edge" we follow Bwana and his trusted sidekick Kito, as they struggle to make ends meet at their waterfront gas station in an off-beat place called Kingsport bay. When all hope seems lost and the power company is on their case with a mean threat, something promising appears. A woman. A woman with cash. What strings does she come attached with? What secrets are hiding underneath her fair surface? Find out, in chapter one of The Journey Down!

JD wins game of the year at the AGS AWARDS 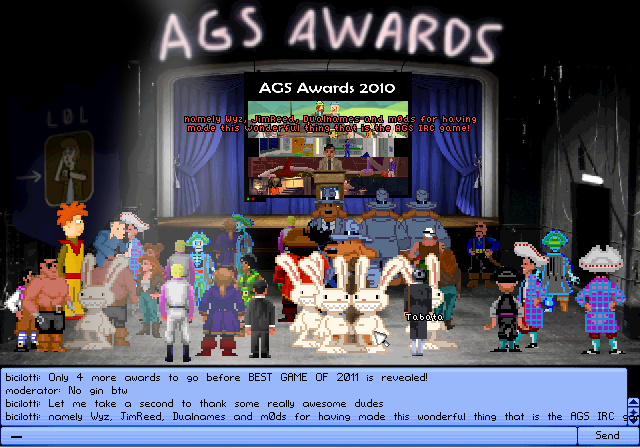 Landslide victory for "The Journey Down" at the annual AGS awards

Every year all games created with "Adventure Game Studio" are rounded up for an annual award ceremony where the finest of the finest battle for great indie developer glory. This years ceremony was unique in that it was accessible via a multiplayer game, built in Adventure Game Studio itself. This way, contestants and onlookers from the community could log in to the actual ceremony and take part of the event in real time. Moderators and organizers took the stage and winners, when announced, had the opportunity to climb into the spotlight and bask in the great glory of indie stardom.

Out of 17 awards, the freeware retro-styled demo of "The Journey Down" made a landslide victory, winning as many as 10 separate awards, one of them being the coveted "AGS game of the year" award. Other praised games at the ceremony include "Snakes of Avalon", "Technobabylon I and II" and "Eternally us".

"The Journey Down: Over the Edge" is the free-to-play prototype version of the soon to be released, fully speeched and high-res "point and click" adventure game with the same name. Chapter one of the high-res retail version is aiming for a 2011 Q4 release and its development can be followed on www.skygoblin.com.

"Adventure Game Studio" is a toolkit for development of traditional "point and click" games and can be downloaded for free from www.bigbluecup.com.

To celebrate the fact that we finally got the Journey Down site updated, we have decided to release the original cinematic storyboards for public viewing...

During my years of working in the indie game crowd I've come to realize that indie artists are doing the same simple mistakes over and over again without...

If you haven't yet decided to download the game, read this, I'm sure it will help you make up your mind!

The official JOURNEY DOWN poster has finally been released and has now been turned into three different sizes of wallpaper. Read more to see a larger...

The Journey Down: Over the edge

Chapter one of the point n click adventure game series "The Journey Down".

this is just... LUCAS ARTS MARTERIAL, if they still made adventure games so TELLTALE GAMES MATERIAL

BTW, your game works on Linux (Ubuntu distribution at least ;-)), so I don't see any reasons why you couldn't add "Linux" to your game available platforms. ;-)

Gamplaywise and storywise this series gets a very strong start too. Too bad we'll need to wait quite a bit for its climax, but I bet it'll be worth it.

Really fun game, but i'm stuck with the shirt. It want to paint it with white stripes and can't do it from bucket because it is clumsy so I put the paint brush in the paint and then try to use it on the shirt which seems the logical thing to do but it keeps saying it could draw things on it but no reason to even though there is! please help is this an error or am I doing something wrong?

Talk to the sailors some more and then try again! I'm guessing you're stuck since YOU have figured out the puzzle, but Bwana hasn't.

Thanks for your kind words! Hope you enjoy the rest of the game as well!

Thanks I got past that part, Now I'm stuck on another part lol but im having fun.

Tracking, I like your style and love P&C :D

One question tho' why didn't you use Wintermute?

Hey, thanks for the lovin'!

I guess when the project started it could just as well have been Wintermute, I just happened to stumble upon AGS, and then AGS it was! Now I'm used to AGS and love working with it so I see no reason to consider any other platform really.

Tags
Embed Buttons
Link to The Journey Down - low res prototype by selecting a button and using the embed code provided more...