This is an English remake of the French graphic adventure game 'La Crypte Des Maudits', originally released for the Amstrad CPC in French language only by Lankhor.

The game can be played in the following palettes (you can switch at any time while in-game):

After stealing the magical book of spells in La Secte Noire,
the Black Sect has returned to terrorize the population.

They are gathering in a nearby crypt, below the dark rooms of
the castle of Golin the Gnome, and you have ventured into it.

Find your way to the crypt through the castle filled with passages
blocked by gates, doors and chests to be opened, buttons to be
pressed, levers to be pulled, and secret rooms...

Can you annihilate this evil sect once and for all? 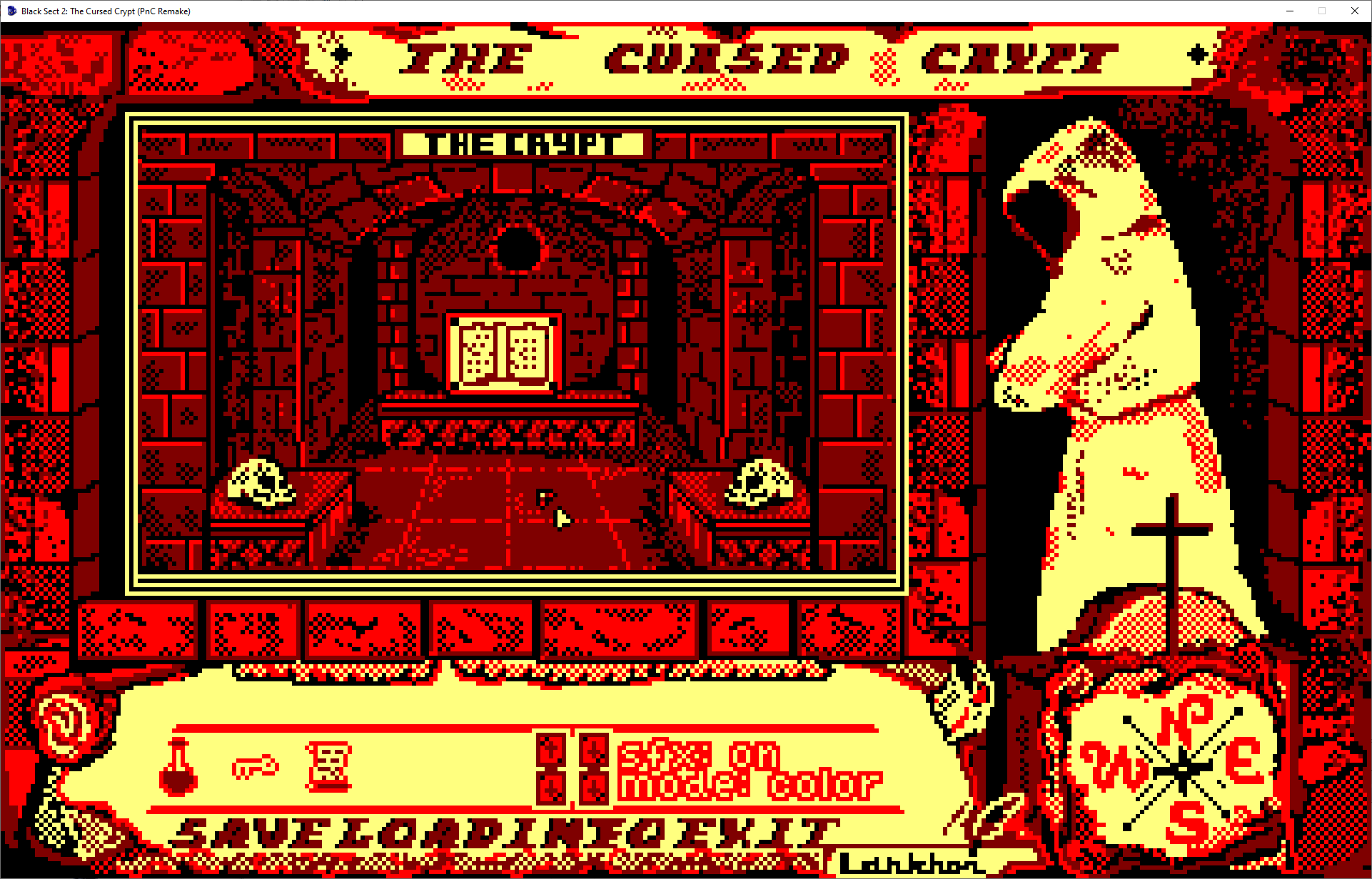 Theropods is currently on Kickstarter until the 8th August! Help us make Theropods become a reality!

Sumatra: Fate of Yandi is out now!

Sumatra: Fate of Yandi is out now! It’s a traditional point and click adventure with a fresh setting - a story about love, friendship and fate, set...

Guard Duty is releasing on May 2nd!

Guard Duty is coming to Windows, Mac and Linux on May 2nd. Wishlist now on Steam to be the first to play.

So many space, so few lazers small demo

A little demo of my current project, a point'n click comedy Sci-fi game.

This is an English remake for windows & linux of the French graphic adventure game 'La Crypte Des Maudits', originally released for the Amstrad CPC in...

Help Jack Trekker, egomaniac ladies' man and stereotypical adventure hero, escape the tomb of the Three Sisters with the legendary Dildontus relic! With...

Deep within his dungeon, Yrolg the necromancer is about to summon a mighty demon to complete his plans to conquer the World. Three brave adventurers...

Beer! is a collection of frantic minigames where you have ten seconds to grab the beer! Easy to pick up and difficult to master, this game rewards quick...

A Tale of Two Kingdoms

A Tale of Two Kingdoms is an epic faerie tale, in the classic style of the famous Sierra and LucasArts graphical adventure games. It is a full-length...

Search the maze for keys and treasure! John 'DRJ' Vanderaart is one of the first published game designers from the Netherlands, best known for "Eindeloos...

In desperation, the jarl of Jarnvidr has called for a Heroine, to stand against the forces of frost and put an end to the lasting winter. Her might, sorcery...

Spending too much time on a spaceship can make anybody edgy. Can the crew of the Quasar nevertheless learn to cooperate? A high-resolution adventure game...

Hi guys. Just to clear up the confusion regarding 'Go to Hell Dave' and Mac. Jaggers pretty much nailed it in his last comment. AGS does support both Mac and Linux, to a certain degree. But they are older versions of the engine and at this point, we're not too sure what limitations that will present to us. All we can really do at this point is build the game in a windows environment and then see what, if anything, we can do to port it across afterwards.

Having said that, if enough Mac or Linux users show a desire to play this game then we will endeavor to do all we can to get a workable version of it on those platforms.

I've built 32-bit and 64-bit versions of the latest official AGS revision on Github, and have played halfway through the Resonance demo with zero problems! I'll continue (and file or fix any bugs I find along the way), and move on to the AGDI & IA fangames, and then Blackwell & Gemini. If they all work just as well, then I'll consider the port complete.

If you make a demo for me to wrap up, and I'll do so and send it to you (you can also have your Linux buddies test it out as well). The Linux AGS port is not perfect currently, but pretty darn good. I'll take a look a the native Mac interpreter (no idea who's working on that), nor am I particularly fond of development on OS X, but if it helps the community, I'll put some time in :-)

We plan on releasing our game on mac, still not certain of the technical implications of it yet.

Currently, every AGS game I've seen on Mac uses a Wineskin wrapper. While that approach is a dirty word in Linux (due to Wine's inconsistent behavior in Linux due to library dependencies, 64-bit vs 32-bit issues, and other weirdness), in the land of Fruit Flavored computers, the picture is not so clear. In fact, commercially wrapped ports of triple-A games are distributed for OS X; take a peek at Portingteam.com ... for some perspective on the phenomenon. This isn't to say it's perfect, but it's almost certainly what you'll end up doing if your release date is this year, unless you (or someone on your team) wish to be a Mac AGS porting programmer and dig into engine development.

I'm a tad confused. The available platforms list Windows, Mac and Linux, yet all the games I've seen on here made with this engine are listed as Windows only... :|

The official site only has Linux and MacOS versions of the 2.x engine and, while I remember running across the beginnings of a 3rd-party port of 3.x to Linux and MacOS, I can't remember where I put the link.

Also, it's been a while, but this may be one of those game-builder engines where the resources and/or scripts are bundled into the EXE, making it difficult to take a game and swap the Windows binaries for Linux or MacOS ones.

Linux went unmaintained for a while (back when AGS was a closed source engine) after the maintainer of the port became unable to support it. After that, periodically, larger fan projects would attract someone to request the code from Chris Jones (CJ), who would let them have it, provided they didn't share, and as such, that person would patch it up and get it going for their team's game or two, and then share the patches with CJ.
Then, last year, he opened AGS sources (artistic license, IIRC) and multiple maintaners came out of the woodwork. I built a poor version of the Linux AGS intepreter for a fangame called "PledgeQuest" supporting the Two Guys from Andromeda SpaceVenture Kickstarter project (spiritual successor to the Space Quest series). It was based on bero's work on the SQ fan game Vohaul Strikes Back ( Sqvsb.com ), which was packaged up for Linux. My version kinda sucked (missing sound, for example).
Now, JJS in the AGS community is patching it heavily, including alpha quality support for 64-bit Linux (which will eventually go toward 64-bit Windows as well). I'm going to hop in there and do what I can to help out, but for sure AGS interpreter support on Linux is back in a big way.

That's becuase no one plays games on a mac (at least no one in their right mind) and anyone on linux should know how to run a game in wine.

Firstly that doesn't answer the question at all, shows a complete lack of knowledge in the area and is just not useful. Wine is available on macs too, along with other stuff like steam etc. The only reason for the lack of games on the platform is because almost the whole world has windows and it is easier to make better gaming hardware for windows, unless you want to make a hackintosh.