The Forgettable Dungeon is an online & offline cooperative action roguelike inspired by Zelda, Spelunky, and beat 'em up games.

My goal with this game is to combine elements from my favorite genres and games without losing what makes them unique. The complex interactions of a roguelike, the fun beat 'em up action from games like The Punisher and X-Men, and the exploration from games like Zelda.

All while keeping the core game simple and intuitive. You can interact with almost every object in the environment, and you must use them in creative ways to stay alive.

Hey guys, sorry for the break in updates things have been super busy lately.

To get you guys up to speed I launched the beta for the kickstarter backers back in december and have been updating it, I recently added the ice world, and redid the graphics.

Anyway on to the pretty images, first up is a quick summary gif of the ice world update.

Next up let's jump right into the graphical update.

I went in and completely redid the rendering, it now features new lighting, shadows, reflections, and is much faster overall!

Here's a few pics and gifs from it: 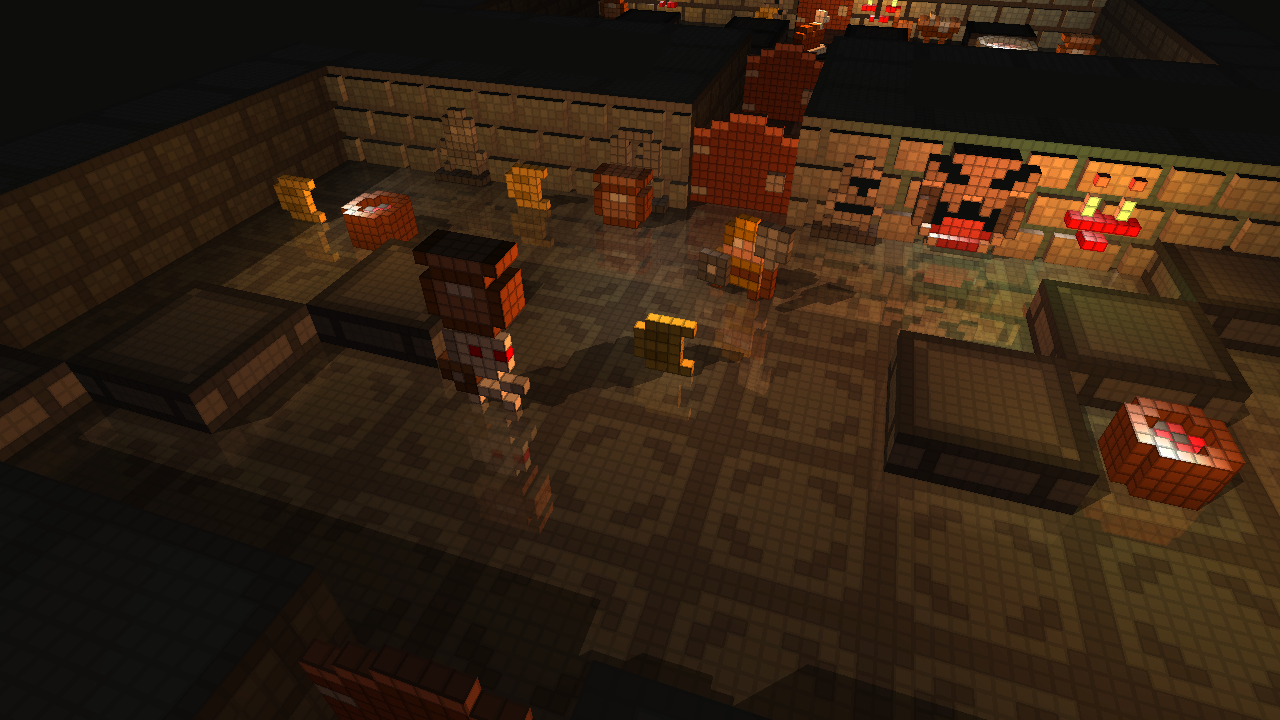 If you want to see more about the graphics update, I put together a compilation video of the progress:

I also batched the dungeon and debris rendering, so the game should run much faster for everyone even with the new effects.

The game can even handle over a thousand debris now!

* debris were scaled up for testing purposes, but it looks really cool *

I added a nice fade in effect for the lights when transitioning from room to room, to keep things spooky.

In non graphics news I started work on the next level theme, made a fun fire flower enemy.

* Also you can now reflect projectiles with your charge attack! *

Another fun feature is that your character now wobbles around when you chat via text.

Here's two links to kickstarter updates if you want to see more.

That's it for now, next post won't take so long I promise.

By the way, if you guys are interested in the game you can still back it and get the beta + full game + name in credits via the humble widget below.

As always thanks so much for checking this update out and supporting the game.

The Forgettable Dungeon is an online & offline co-op action roguelike featuring heavy customization, and this will be the last post about the Kickstarter...

The Forgettable Dungeon - Funded on Kickstarter!

The Forgettable Dungeon is an online & offline co-op action roguelike featuring heavy customization, and we were just funded on kickstarter!

The Forgettable Dungeon - Kickstarter is live!

Do you guys have plan to launch a limited edition of this game? it would be awesome ;)

A physical boxed copy could be pretty neat, but yeah not so sure about a digital special edition version.

Is this game still happening?! my friends and I have been wanting to try it out!

Yeah it is, sorry for the late reply.

I've been busy working on the game and keeping the kickstarter backers up to date.

I'll post an update on here around monday until then you can check out these two posts.

Edit: The beta is on sale right now, but the normal release will hopefully be a bit after May.

Great! Can't wait to smash all the pixels out of someone è_é

There's also an email list on the main site if you want to be notified when it's officially released.

What are you focused on adding the most?

Right now I'm mainly focusing on getting the core gameplay super polished. As well as polishing the overall look and theme to the dungeons.

I've also been working on adding some various situations and crescendo moments to break up gameplay a bit.

Twitter
Tags
Embed Buttons
Link to The Forgettable Dungeon by selecting a button and using the embed code provided more...