The hero fights to free a land that is controlled by seven towers, he must find each tower and slay the lost soul within. The game is played across two main types of levels. Type one is a side scrolling action based level. These levels contain plenty of monsters to fight and many sections are guarded by sub-bosses. The character has various attacks to aid his progress through these levels and in some parts can change into a wolf/beast. The second type are the main towers, these levels are vertical and are more puzzle based as the player must climb to the top, or descend to the bottom. There will still be some fighting along the way but most fights will be part of puzzles. At the end of these levels Bathoryn will have to fight and beat the tower boss before moving onto the next area and tower.

Just letting everyone know we have a solid release date for the game! December 9th!we are sorry for all the push backs, But we want the game to be the game we want to release..:) Console versions will follow next year

The early access demo is out and people getting Slain! we can't wait to get the game out now.

Here are some recent bunch of images and gifs 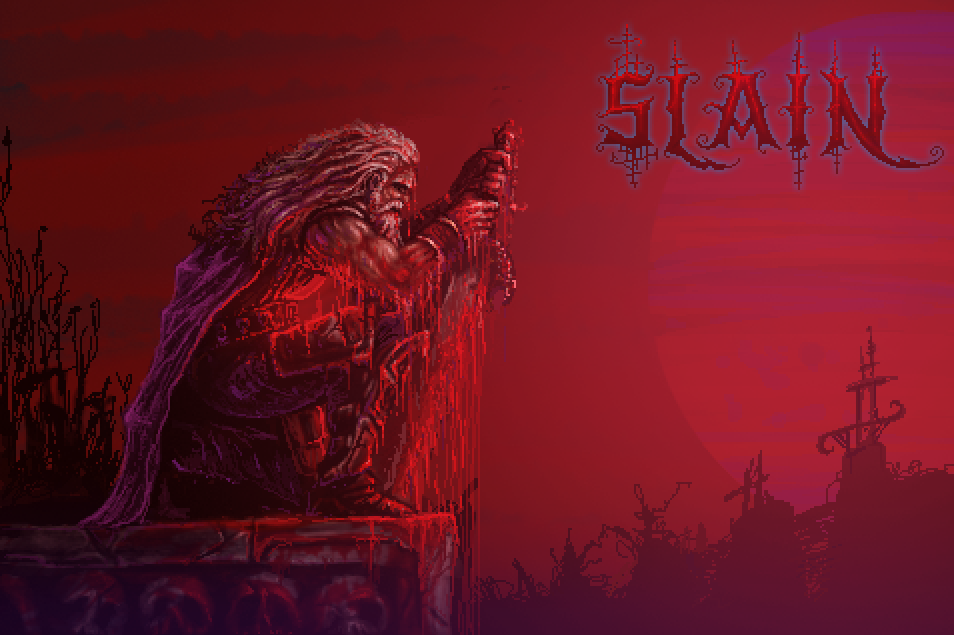 We are also up on Steam. Store.steampowered.com Steamcommunity.com

So pop on by and leave some comments!

Hope you all enjoy!

(release date delayed to March 24) Here are some screens!

New gameplay trailer and announcement that CVB once of the great metal band Celtic Frost will be adding blood to the music of Slain!

We have a lot of news on Slain! Kickstarter is live, new game-play video, new gifs, screenshots, and additional platforms announced.

Its screenshot Saturday! So here is Bathoryn leaping over a Skullcrawlers goo ball..

A year of Slain!

1 year of working on Slain! from concept to playable.

Excellent game, no question here. But it looks like there are completely different versions of it on different websites. The Steam version (deluxe edition) - i found it to be worse. It removes the "brutal attack" and has a dedicated block button with the "critical strike mechanics" i found those changes to be cheesy (critical strikes) and sluggish (block button) additions compared to the way the GOG version plays. These change the mechanics of the game a tad to the worse side.
And this game is just too damn good to simply let it slide.

The GOG version mechanics are BETTER, faster and you can decapitate enemies without seeing the awful flash effect instead.
I actually thought the deluxe edition is supposed to be superior, but it is not so. Still in-game text on the deluxe says that the game is still in development. Believe or not, but the GOG version felt like a finished product, the deluxe edition strangely does not.

Nonetheless, we'll play this beauty in any form, but since i own both - i'll stick with the EARLIER (yes) GOG version.

I have read the Steam reviews and most of them say that the controls are really bad. Are you planning any fix for that?

Game look great but also it look like noone can finish it.

The game gonna be released on GOG.com?

The atmosphere looks very dark, desperate and gothic... and I like it!

Please just don't make it frustrating hard! The videos look like the player can get killed instantly every 2-3 seconds.

This game looks bloody fantastic. It's like Act Raiser 2 and Castlevania put together.

Geralt, is that you?)

Twitter
Tags
Embed Buttons
Link to Slain! The 7 towers. by selecting a button and using the embed code provided more...