Xenno The Rogue has been greenlit! Thank you all for the support! Xenno The Rogue is a 2D action RPG platformer about religious fanaticism, set in a dystopian medieval fantasy world that has been overrun by the undead. Coming to PC and consoles in 2018.

This is a major update, far more substantial than the previous updates thus far. Lots to cover.

So this is the first demo update since Xenno The Rogue was put on Steam Greenlight and shown at PAX East 2017. I received an enormous amount of feedback from doing both (both positive and negative) and had the opportunity to observe many people playing my game at PAX (hundreds) to get an idea of what issues needed to be addressed and how to move forward with development. 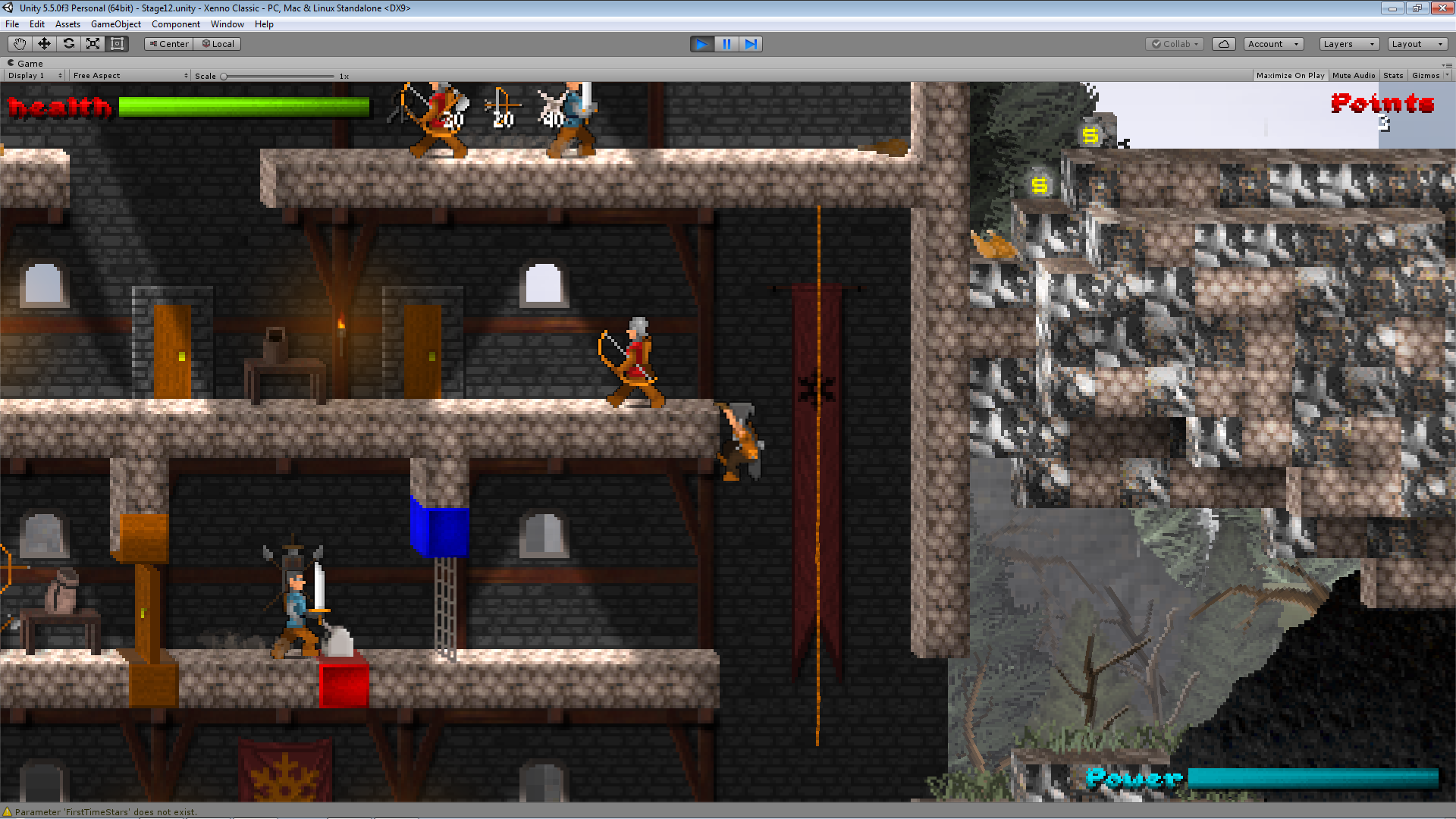 The next major change has to do with an observation I made of players at PAX. I noticed that on level 2, a number of players would climb up that first rope, and then awkwardly attempt to jump off and attack the archers on the platform above the blue gate, only to miss and plummet to the bottom, where they would have to climb the rope again and try to do the same thing with the same result. That wasn't how that situation in the game was designed to be handled at all, and I'm glad I got to see this behavior for myself so I could take appropriate steps to improve things.

First thing I did was remove all jumping attacks. They were already pretty awkward to begin with, but then watching people try to use them just showed me they really shouldn't even be in the game at all. Rather than awkwardly jumping off the rope and trying to attack the enemy archers, it is far more effecient to jump off the rope and grab the ledge, hanging there for a few seconds until it is safe to pull yourself up, doing so and then attacking them.

Besides removing the jumping attacks so these aren't attempted anymore, I also included a tutorial popup on the first stage to explain how the ledge grabbing/hanging mechanic is most effectively used in this kind of a situation. Xenno can grab and hang from the ledge indefinitely without falling or taking damage, and I could tell that players didn't realize that. The tutorial popup is my attempt at trying to explain this and how the mechanic was meant to be used to be the most effective.

The next gameplay modification I made was making ledge grabbing in mid-air automatic. You no longer need to hold down JUMP to grab ledges. If a ledge is in range of being grabbed, Xenno will grab it now, and hang there indefinitely until you decide if he should pull himself up or drop down.

Another notable control improvement I made is what I am calling "jump forgiveness." I had the pleasure of meeting and hanging out with Sebastien Benard of Motion Twin (Dead Cells) at PAX who spent a few minutes playing Xenno and remarking how it reminded him of the old side scrolling Prince of Persia games from back in the day. He noted that in Prince of Persia, gravity would not "kick in" immediately if you ran off the side of a ledge or tried to jump across a gap and miss-timed your jump button press. For a brief instant, you could still jump even though the character was technically in mid air. It made jumping far less annoying and less likely that someone will miss their jump and fall. This was a suggestion I loved, and implemented. Huge thanks to Sebastien for this improvement!

If you are familiar with the Street Fighter games, you'll know what this is. Because Xenno's fighting mechanics are heavily based on attack combos, I have implemented some attack buffering to improve the controls. Now when you try to fire the bow while throwing an axe and the button is pressed too soon, the attack will now buffer and the bow will fire as soon as it's possible, rather than just not working at all.

A small but significant change is that now all of the enemy units (besides zombies and the rock monster) react to being hit now. Instead of just ignoring the axe that hit them in the face and attacking you, they now get stunned for a few moments, allowing you to follow up with more strikes and kill them.


YOU CAN'T KILL THE ROCK MONSTER

Lots of players persisted in trying to kill the rock monster, to both comical and frustrating results. I added a floating text popup above the rock monster each time he gets hit that says NO EFFECT. I also reduced the damage of his punch in half. Hopefully this is enough to make everyone realize it just needs to be jumped over and avoided and the consequences of messing with it aren't so lethal so quickly.

Another funny observation I made at PAX was that players often got tired of swimming or climbing ropes, to the point that they would just walk away from the game and let Xenno drown. I think mostly the issue was the swimming. Sometimes Xenno got left hanging (literally), but most of the time when people walked away it was because the rock monster killed them with them trying to attack it, or because they got tired of swimming. So I boosted Xenno's swim speed and climbing speed a lot. Seriously, he swims and climbs at superhuman speed now. In fact I'm fairly certain he swims faster than he can sprint, but I have not done any tests to confirm this. 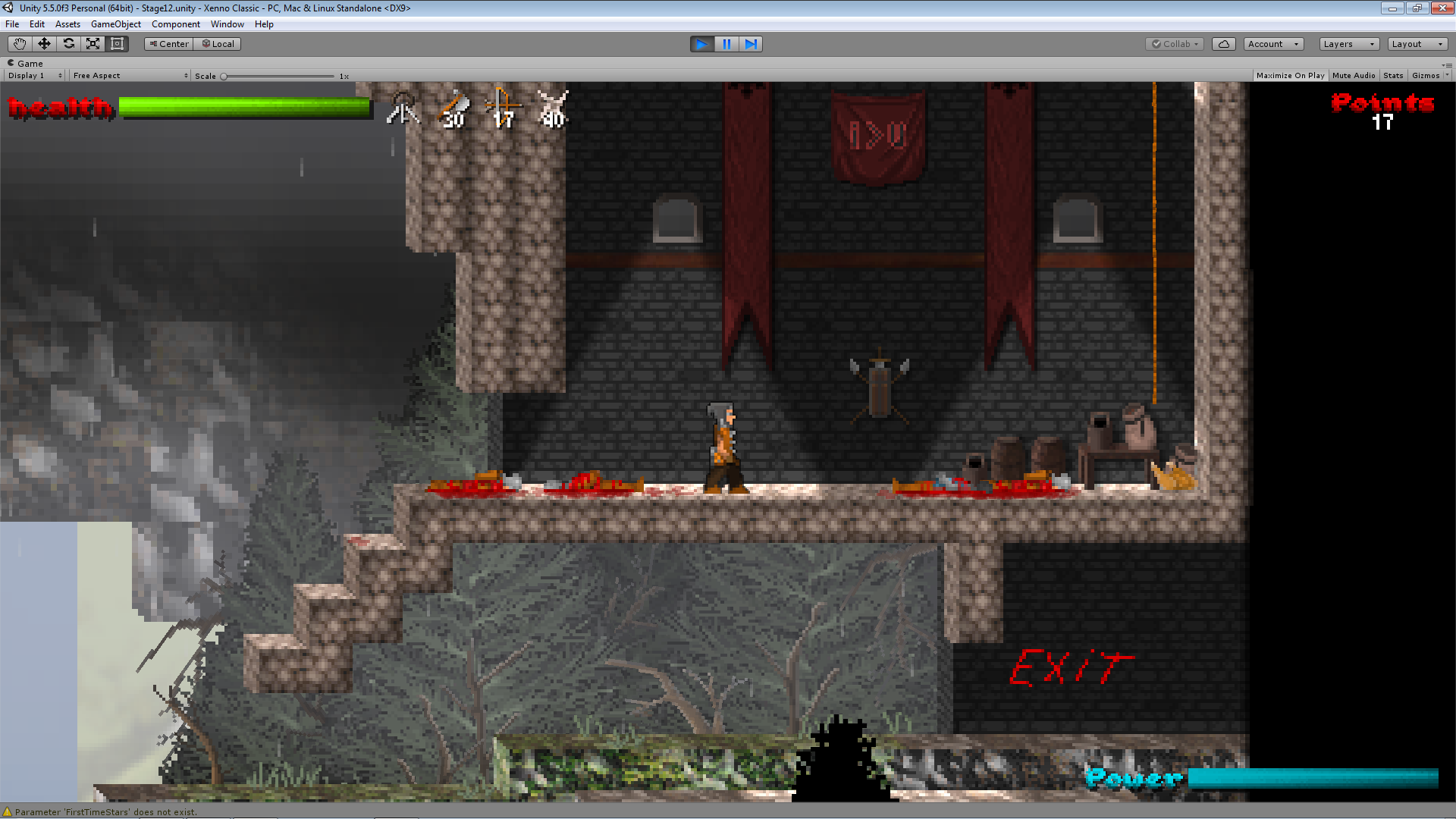 I got a ton of compliments that the environments in the game are pretty and colorful, and some criticisms that certain areas need more work. I added some more details, like barrels, boxes, buckets, cloth sacks, etc. I also added some more castle banners/tapestries. Always looking to add more. 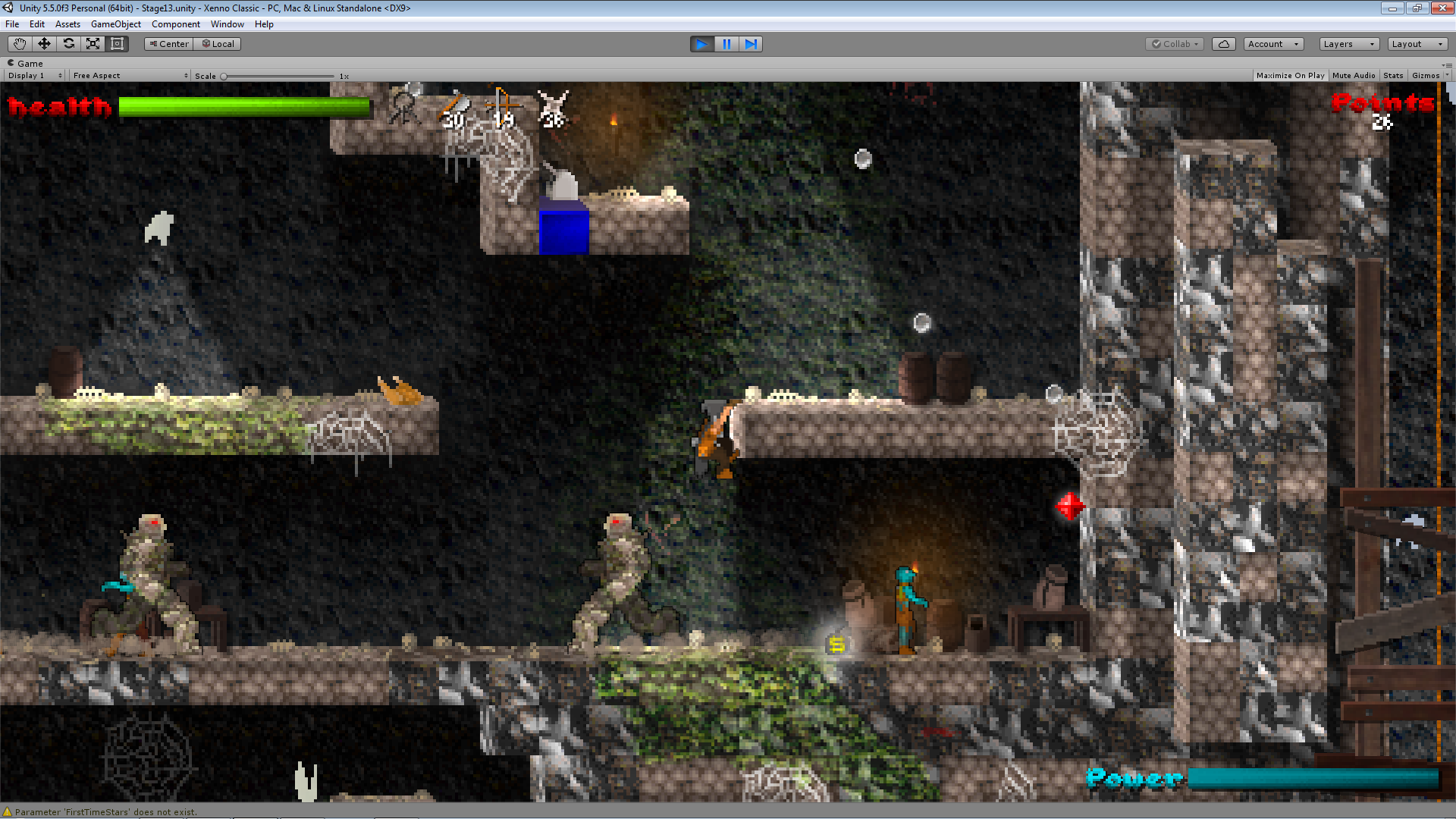 The video background on the main menu is no longer reflective of the current quality of the game, but I have decided to leave it as is for now as a placeholder. I intend to replace it eventually.

Currently working on the next demo version 1.4 based on feedback and observations from PAX and Steam Greenlight.

A brief history of Xenno The Rogue

A brief explanation of how this project came to be.

This is the build I will be showing at PAX East 2017. 32 bit Windows. Includes the first 4 levels of the game with tons of performance optimizations...

32 bit Windows version, includes the first 3 levels of the game with tons of graphical improvements, bug and glitch fixes, and gameplay tweaks.

This is an early alpha demo which includes the first 3 levels of the game.